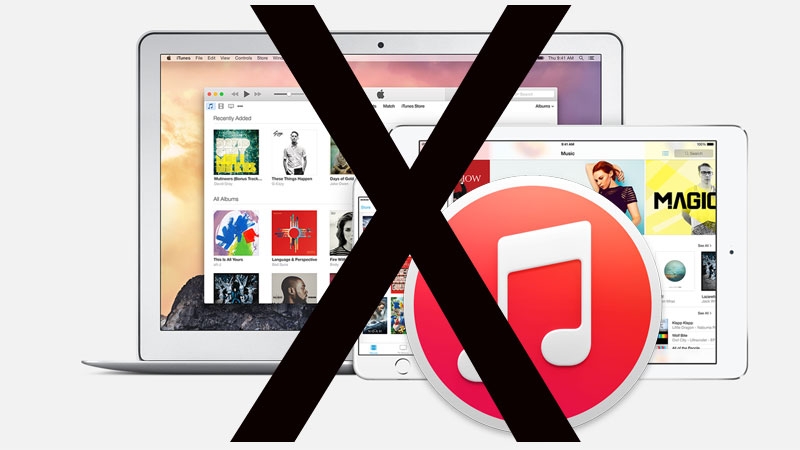 Some people quite like iTunes. This probably isn’t the article for them. Instead, we’re asking whether you can eradicate iTunes from your life and if you really should.

If you’re dead set on ditching iTunes, you’ll probably need to invest in some other apps and services to take over the tasks iTunes performs. However, we also reckon there’s one thing that should stop you binning Apple’s app entirely (which will require a ‘skip to the end’ if you hate being kept in suspense)…

Alternatives to iTunes for music on Mac or PC

Although iTunes has come a long way from its ‘digital jukebox’ origins, music playback remains the main reason many people have it installed. And with iTunes being free, competing apps find the going tough. This is probably why many decent products (such as Ecoute — now iPhone-only) have been abandoned.

However, alternative players still exist, including Swinsian and VOX. Both of these focus on music, import your local files, and support a wider range of formats than iTunes, including FLAC. (Swinsian is the more iTunes-like app; VOX has a tiny interface that doesn’t scale well with large libraries, requiring heavy use of search.) 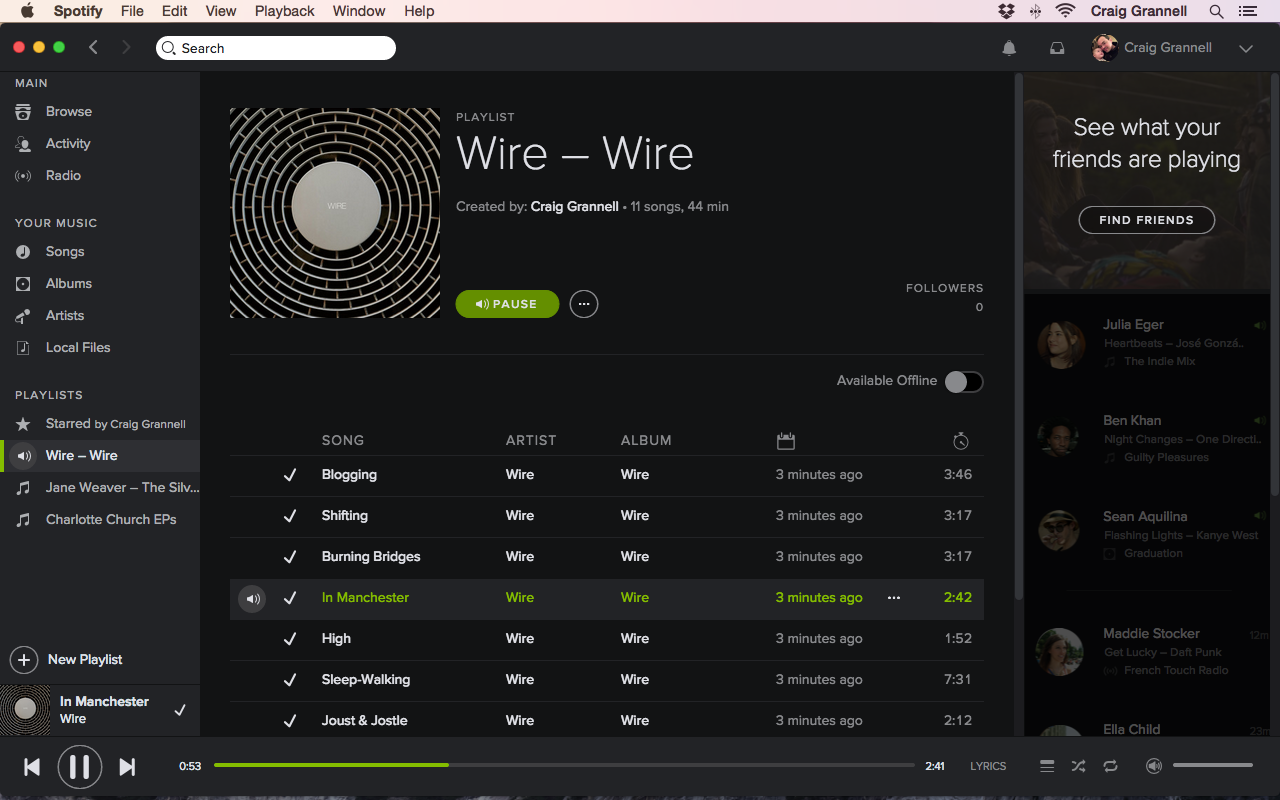 Another option is to ditch local music entirely and use cloud-based playback (such as Amazon Music or Google Play), or a streaming service like Rdio, Tidal or Spotify.

For our money, Spotify is the best choice, with the largest catalogue, a reasonably good native OS X app, and the option to integrate your local music files.

Read: How to get high-quality music on your iPhone

Alternatives to iTunes for music on iPhone and iPad

On iOS, things are more complicated, due to the system’s relatively closed nature. The Music app heavily integrates with iTunes, and it’s not just a case of dragging and dropping audio files from your Mac to your device — Apple assumes you’ll be syncing purchased or ripped music using iTunes or relying on Apple’s cloud services.

If you’ve already set up iTunes Match, that will enable you to access your entire music collection on an iPhone or iPad, without needing iTunes itself, and you can also download subsequent and previous iTunes purchases directly to your device. Read: how to set up iTunes Match.

The online-oriented products mentioned for the Mac also exist for iOS; again, Spotify’s probably your best bet, and has a modicum of integration between devices, so you can use your iPhone to control Mac playback.

Softorino’s WALTR is an option for people who prefer owning actual music files, including high-res FLACs, rather than subscribing to streams. The app is straightforward: connect your device to your Mac via a USB cable, and drop the audio files you wish to add to Music on to WALTR. They will then be, where relevant, converted to a format compatible with iOS, and sent to your device.

Read: How to download movies to iPad without iTunes

Alternatives to iTunes for TV, movies, podcasts and books

With other media, what you need to do depends on what you used iTunes for. Regarding books, iBooks is on OS X and iOS alike, and so you don’t really need iTunes for dealing with reading material.

As for managing and playing back podcasts, iTunes isn’t especially great anyway, and nor is the Podcast app, so consider checking out Instacast and Downcast, which both have OS X and iOS incarnations, or Pocket Casts, which has an iOS app and browser version.

For video, if you’re totally into iTunes Store purchases and use your Mac to play them back, you should probably stick with iTunes anyway. If you’ve largely just used iTunes to store and sync iOS-compatible videos, there are plenty of alternatives. The aforementioned WALTR will happily convert video and fire it at the native iOS Videos app. We also rather like StreamToMe and Air Video HD, which work with a free Mac- or PC-based server app to access video files, and encode them on the fly for your device.

This means you don’t even have to sync anything — you can just watch your videos whenever you have connectivity. The caveat: these apps don’t work with videos that have DRM (such as iTunes Store purchases). And then, of course, there are countless streaming services for telly and video that you can install on your devices that don’t need iTunes, such as Netflix, NOW TV, and BBC iPlayer.

Read: How to get back missing music, films and TV shows that have disappeared from iTunes

Alternatives to iTunes for managing apps and backing up

iTunes can be used for downloading apps and syncing them to a device, and also for rearranging your Home screens. Doing so is unnecessary, though; you can easily download new apps directly on a device. To then install on another device, just open the App Store, ensure you’re signed into the same iTunes account, and head to the Purchased tab (found inside Updates on iPhone).

One area in which iTunes can come in handy is for bulk-deletion. Deleting even a single app can take time on iOS, since devices have a tendency to lock up while you wait for a ‘delete’ dialog box. With iTunes, you can deselect several apps and get rid of them in one go. [Read: How to delete music from an iPhone]

You can now also do this with PhoneExpander. The app scans your device, and enables you to order apps by size; you then click checkboxes and a ‘Remove’ button to get rid of a number of them in one go. (The app also provides tools for clearing photos and messages.)

In a more general sense regarding back-ups, iOS devices can optionally be backed up to iCloud (Settings > iCloud > Backup), with the caveat that you must have enough free space. In Settings > iCloud > Storage > Manage Storage, you can check device back-up sizes against your iCloud storage plan, and for the current device optionally turn off certain components if necessary (such as Camera Roll).

Note that anything you disable won’t be recoverable if you need to restore a device, though. This is the main reason why although we’re happy to recommend alternative software to help minimise iTunes usage, we won’t suggest getting rid of the app entirely. iTunes should remain on your Mac for making periodic local back-ups of devices — especially before iOS upgrades. (Select your device and in the Summary pane, click ‘Back Up Now’ to back it up.)

Read next: How to sync to iTunes: Sync your iPhone or iPad with a Mac or PC |  Fixes for common iPhone syncing problems

Uninstalling iTunes — and changing your mind

If you’re unrepentant and want shot of iTunes entirely, it’s possible. Try to trash it in OS X Yosemite and a warning dialog will grumble that iTunes “can’t be modified or deleted because it’s required by OS X”, which is a bit of a stretch. So in Terminal, enter the following commands:

Enter an admin password, hit Return and the iTunes app will be gone — for all users. To eradicate even its support files, Alt-click Go in Finder and open your Library, and then delete the iTunes folder, along with instances of com.apple.itunes* in Preferences and Preferences/ByHost.

At this point, someone might harrumph a bit and suggest you’re being a smidge obsessive. Should you wish to press on, related data files can be removed, too — device back-ups live in ~/Library/Application Support/MobileSync/Backup, and media files lurk in ~/Music/iTunes. Make very sure you really don’t want these before deleting them!

And if you’ve got to this point, broken out in a cold sweat, and screamed “I have made a terrible mistake”, you can grab a copy of the latest version of iTunes from itunes.apple.com. Although we’d suggest not deleting your media folder before that point, or you won’t have a lot to play — or will have an awful lot of downloading to do.

How to get rid of exclamation marks in iTunes, and get your music to play