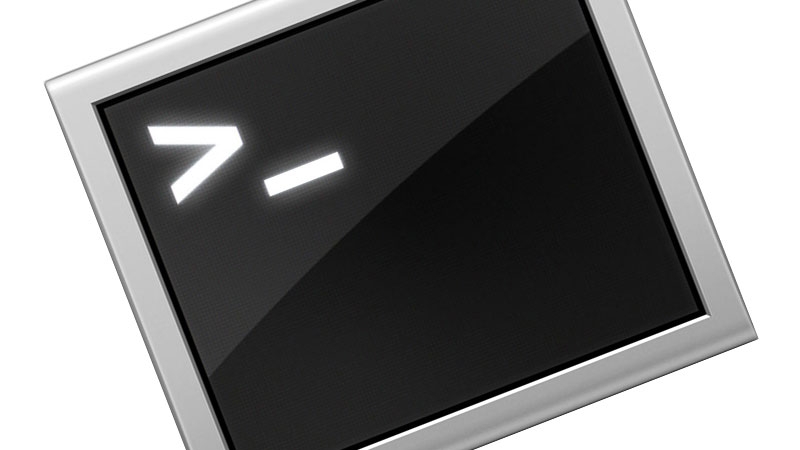 When launched Terminal provides a line interface that you can use to control parts of the macOS interface – essentially it gives you access to the UNIX features that lie beyond the macOS skin. Here we will be looking at some projects that you can try out in Terminal, using your new-found skills.

If you’re new to Terminal, or need to brush up on your commands, the best place to start is our introductory feature which you can read here: How to use Terminal on a Mac.

macOs creates hidden files and folders for a variety of reasons. Most of the time, there’s no reason for us to know about them or even know they exist, but if you need to track one down, you can do it with Terminal. Type:

Change TRUE to FALSE when you want to hide the files again.

2. Copy files from one folder to another

Option dragging and dropping files to copy them from one place to another is so passe. Try Terminal’s Ditto command instead.

Where ‘original folder’ and ‘new folder’ are the file paths of the source and destination of the files. To see each file’s name in the Terminal window as it’s copied, type ‘-v’ after Ditto. This is the command for verbose mode. 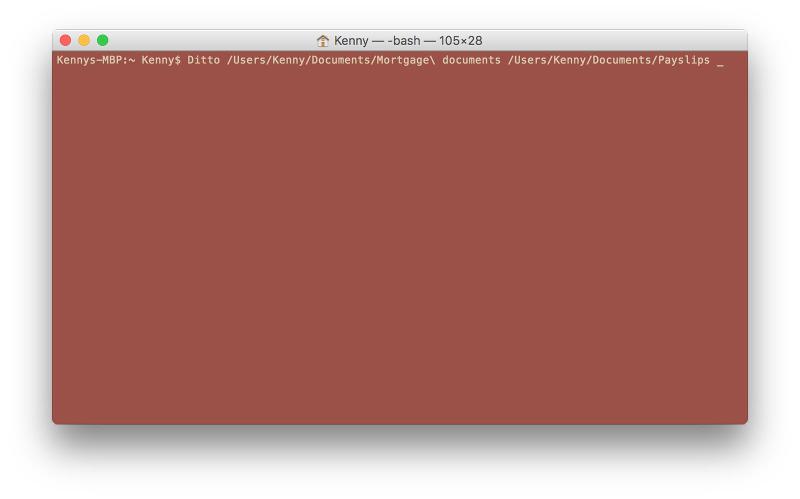 If you’ve got the URL of a file you need to download, but don’t want to download it in Safari, Chrome, or Firefox, Terminal can help. It needs just two commands – one to set Terminal’s location to your Downloads folder (or anywhere else you want to put the downloaded file) and one to download the file. To set the location, use the command below. Change ‘Downloads’ to a different folder if you want to, remembering that if it’s not in the first level of your user directory, you’ll have to type the full path – or drag the folder on to the Terminal window.

4. Disable drop shadows on a screenshot

caffeinate -u -t [number of seconds]

6. Make your Mac automatically restart after a crash

When your Mac freezes or crashes, often the only resolution is to hold down the power button and wait for it to restart. Use this command to make it restart automatically when it senses a crash.

7. Hide non-active apps in your Dock

Dock too crowded, use this to make it show only active apps.

8. Dull hidden apps in the Dock

You can go even further and make the Dock dim apps that aren’t visible on screen.

Here’s one we really like. When you hold down a key on your Mac’s keyboard, it either displays a pop up of additional characters or does nothing. Here’s how to make it repeat the character you tapped, just like it used to do.

To undo the command, use the same command but replace ‘FALSE’ with ‘TRUE’

10. Hide files and folders from view in the Finder

chflags hidden [path of folder you want to hide]

Emacs, the text editor that comes pre-installed with macOS and that can be run from terminal, has a number of Easter eggs in the form of games.

To display them, type Emacs then hit enter, then Fn and F10 then t then g

You’ll see the available games listed and can now use the cursor keys to select them. 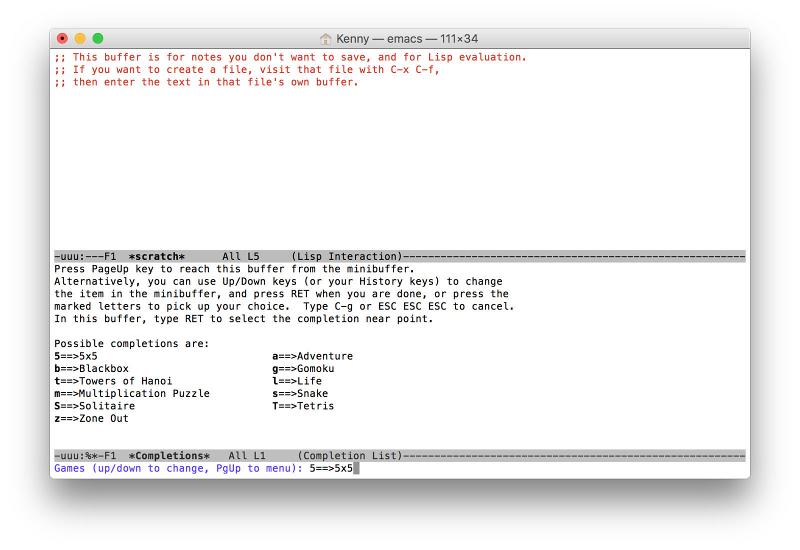 Type: banner -w [the width of the banner in pixels] [your message] 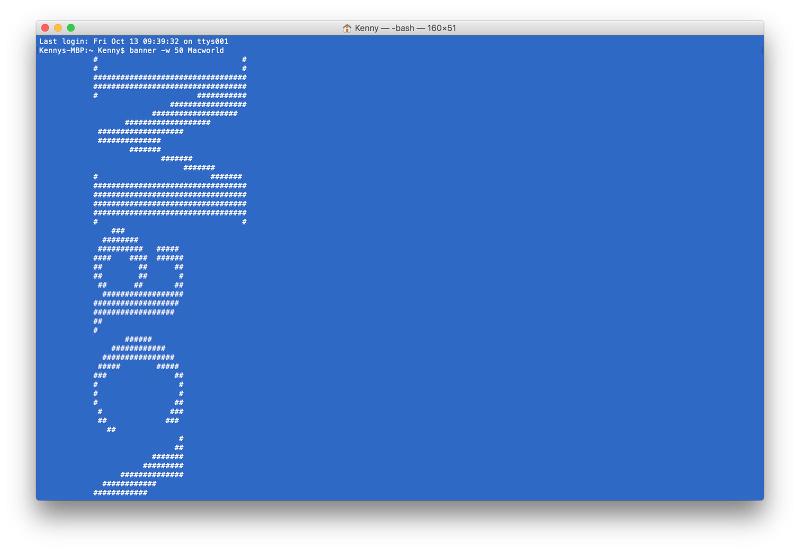 13. Enable an iOS-like power chime when connected to power

Use this to make your Mac chime like an iPhone when you plug in the charger.

To change the frequency with which your Mac checks for macOS updates from weekly to daily, type:

If you’ve got the URL of a file you need to download, but don’t want to download it in Safari, Chrome, or Firefox, Terminal can help. It needs just two commands – one to set Terminal’s location to your Downloads folder (or anywhere else you want to put the downloaded file) and one to download the file. To set the location, use the command below. Change ‘Downloads’ to a different folder if you want to, remembering that if it’s not in the first level of your user directory, you’ll have to type the full path – or drag the folder on to the Terminal window.

ls -R [the path of the directory] 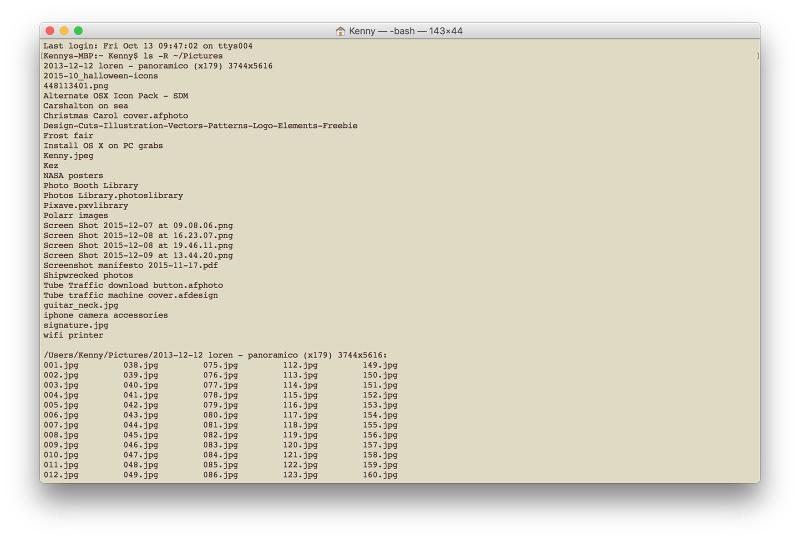 17. Restore a disk image to a volume connected to your Mac

If you have a disk image that you need to create a an actual volume from, use this command:

If you’re ever sent a file that won’t open on your Mac, perhaps because you don’t have an app capable of opening it, or because it’s corrupt, you can view its contents in Terminal. For lots of files, like audio and video, the text you see won’t mean much. For others, there may be just enough for you to parse what you need.

Tip: instead of manually typing the path to the file, you can drag it on to the Terminal window and drop it after the command.

You can change the place where screengrabs are saved by typing:

Then hit Enter and then:

20. Stop apps from saving to iCloud by default

Some macOS apps like TextEdit and iWork apps save to iCloud by default. You can change that by using:

To revert to iCloud, use the same command with the flag set to ‘true’ 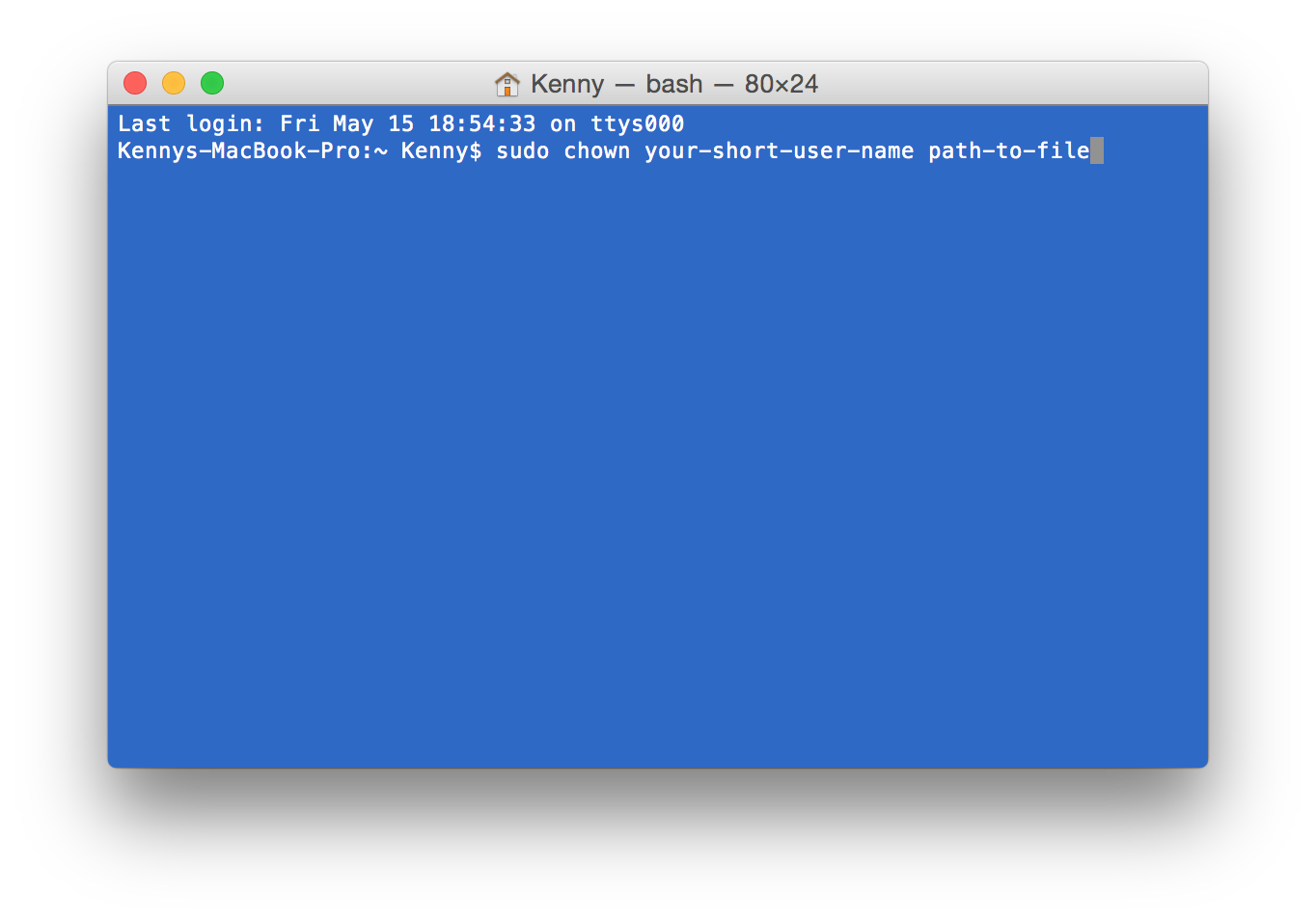 File permissions control which users can access and modify files and folders on your Mac. Mostly they work very well, but occasionally things go awry, like when you copy a file from one user account to another and discover you can’t open in it in your account.

There are two commands we can use to change permissions; chmod, which modifies permissions for all users except the file’s owner, and chown which assigns ownership to a specific user.

So, to change permissions on a file to allow anyone to access, read, and modify the file, we’d use:

Where path-to-file is the path of the file whose permissions you want to modify. Remember, rather than type the file path, you can drag the file onto the Terminal window. To modify the permissions to allow access and reading, but prohibit changing the file, swap 777 for 644.

If you want to change permissions on all the files in a folder, drag the folder onto the Terminal window instead of a file, and type -R after the command name.

To change ownership of a file to your account, use:

22. Change the default for screen shots on the Mac

By default, screenshots in OS X are saved as .png files. That’s usually fine, but you can change it if you need to. For example, to change the default to jpeg, type:

You can also change to PDF or TIFF using the same command and swapping your chosen format for JPG.

To change the default name for screenshots, use:

Replace the-name-you’ve-chosen with whatever you like and screenshots will now be given that name followed by the date and time. 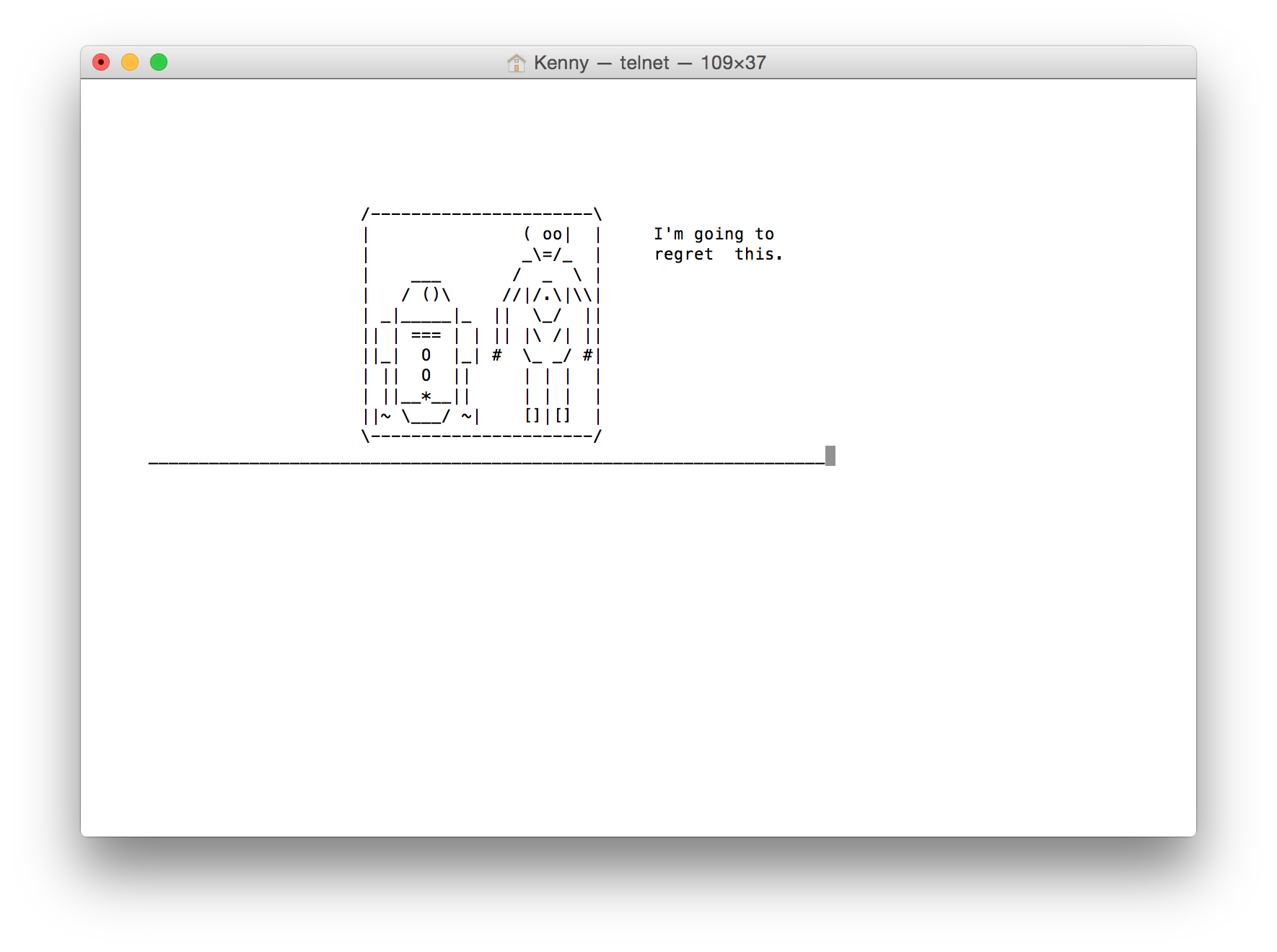 This one’s just for fun, but what fun! There’s an ASCII version of Star Wars running on a Telnet server in The Netherlands. To watch it, use:

Quick Look is an incredibly useful tool for quickly examining the contents of a file. And while it’s primarily intended for images, it can also be used to read text documents. Sadly, reading is as far as it goes. You can’t select text to copy it, for example. At least, not without the help of a Terminal command. Type this to allow you to select text in Quick Look:

We have a complete tutorial for how to select and copy text from Quick Look previews in OS X here.

25. Disable Auto-restore in Preview using Terminal on the Mac 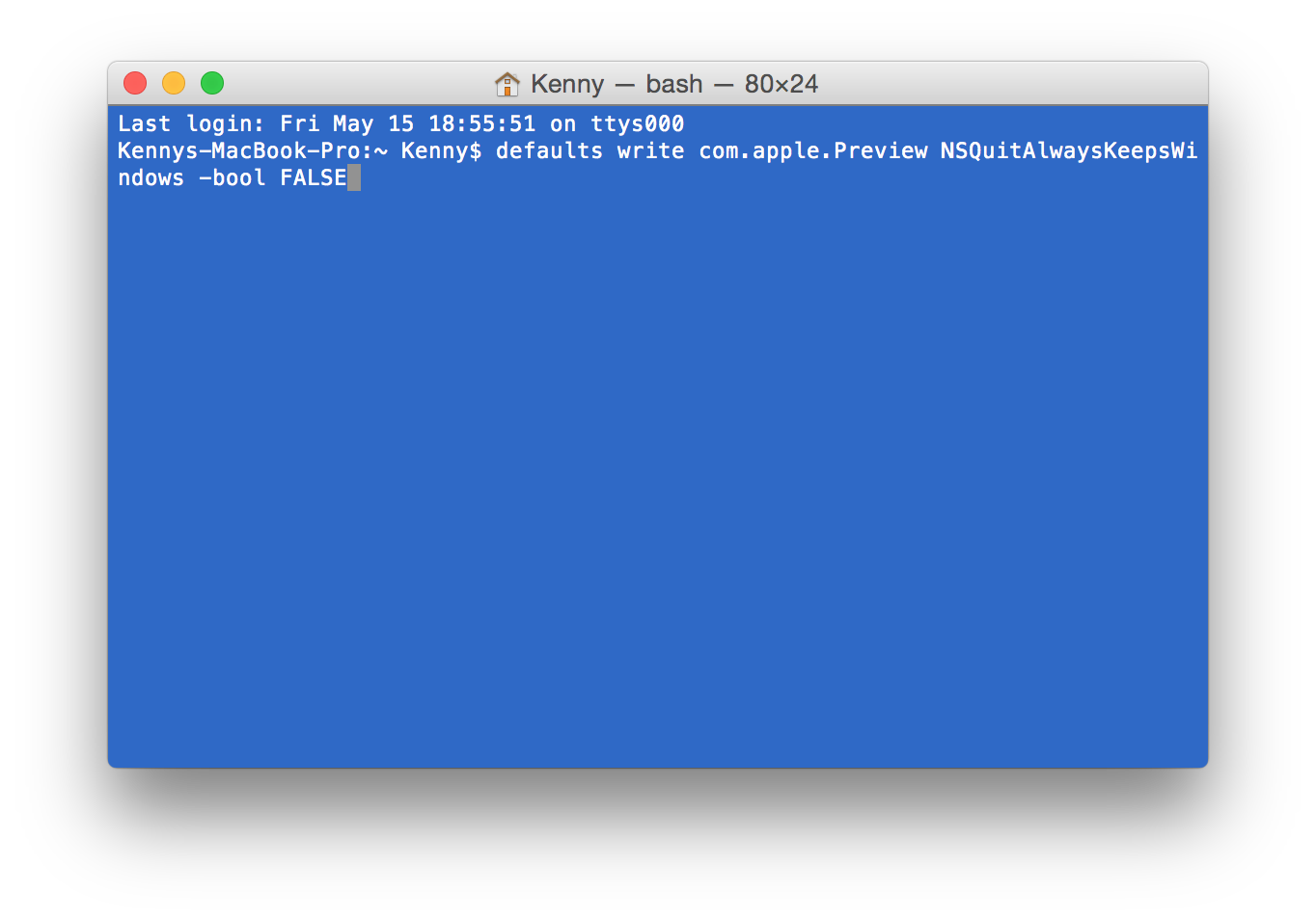 Do you ever open Preview and find that it spews open document windows all over your screen? That’s the fault of Auto-restore, a feature in OS X since Lion, which saves the state Preview is in when you quit it and then reverts to that state when you open it again. So, unless you close all open documents before quitting, they’ll re-open next time you launch Preview.

To prevent that, and launch Preview without any documents, use this Terminal command:

To change back to the default, re-type the command, replacing FALSE with TRUE. To do the same thing in QuickTime X, replace com.apple.Preview with com.apple.QuickTimePlayerX

If you use Show and Hide Dock, you’ll notice that when you drag the mouse pointer onto the bottom of the screen, or whichever edge you keep the Dock, there’s a delay before the Dock slides into view. You can eliminate that delay with these commands:

The ‘0’ represents the delay before the Dock slides into view, so if you want to reduce it, but not eliminate it altogether, replace the ‘0’ with another value, measured in seconds.

To revert to the default, type:

You can also change the speed at which the Dock slides. Again, it’s done by modifying a delay. So, to make it instant, type:

27. Add a message to the login window 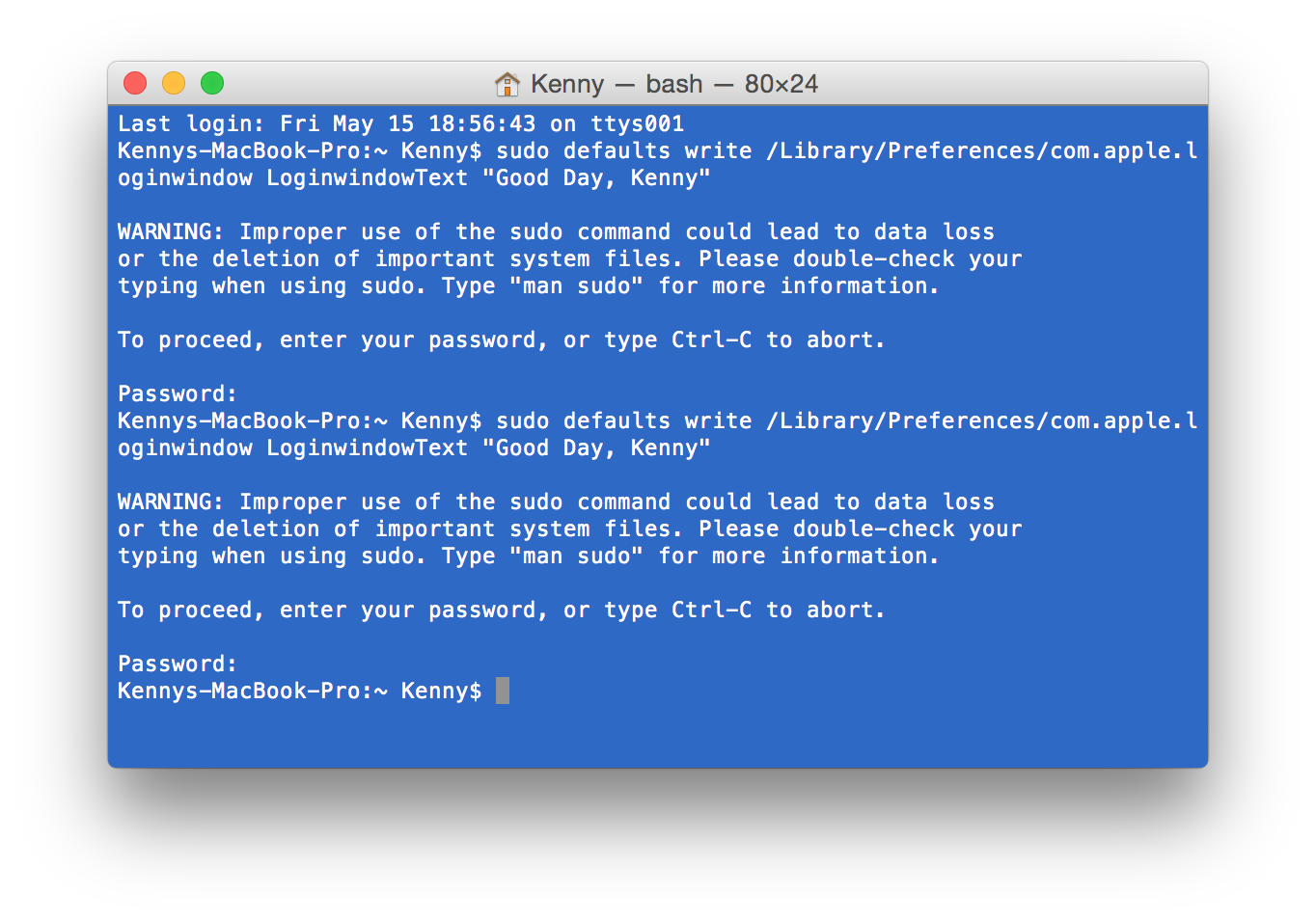 Whether it’s to prank other users, provide daily affirmations or inspiration to yourself, or for any other reason, there may be occasions when you want to put a message in the login window in OS X. With the help of Terminal, it’s very easy. Type:

The next time you log out or restart, the message will appear in the log in window. To remove it, use:

You can make your Mac say anything you want in the currently selected voice. To do that, use the ‘Say’ command, like this:

Say “whatever you want your Mac to say”

As soon as you hit Return, your Mac will speak the words you typed.

29. Get rid of Dashboard 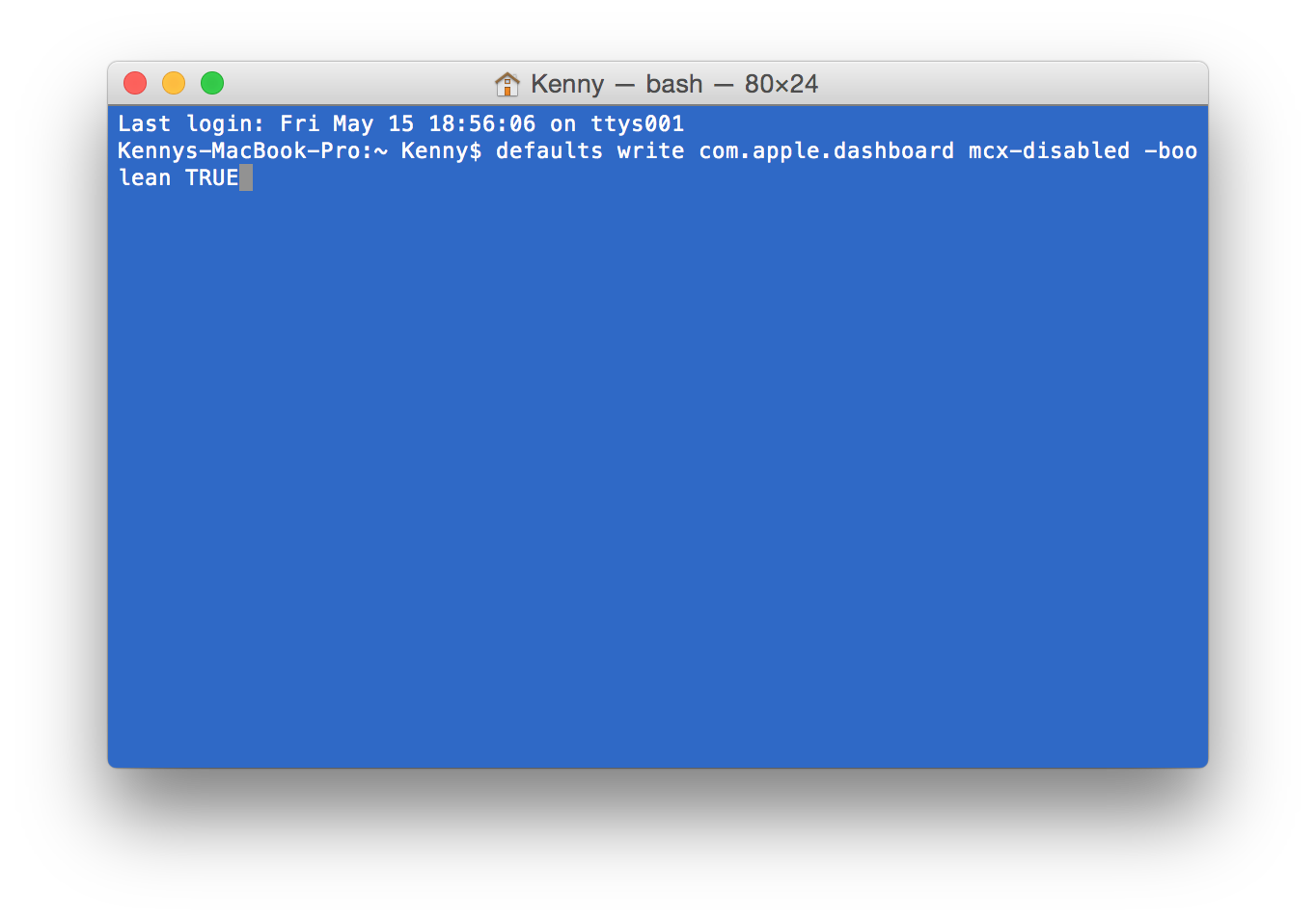 Let’s face it, who uses Dashboard anymore? For most of us, the only clue to its continued existence is its appearance in Mission Control. If you’d like it gone completely, use this command:

To bring it back, use the same command, but replace TRUE with FALSE.

Spotlight is OS X’s search tool and one which is incredibly useful. Occasionally, however, it can become corrupt or stop working properly. The solution is to rebuild it. Guess what? Yes, theres a Terminal command for that too. Use:

Where ‘DriveName’ is the name of the volume whose index you want to rebuild. In most cases, this will be your startup volume, and unless you’ve changed it, it will be called ‘Macintosh HD.’ Alternatively, if you have volumes mounted on your Mac’s Desktop, you can drag the one you want onto the Terminal window, and ignore ‘/Volumes/DriveName.’

What Automator can do for you

How to view your Mac or PC screen on an iPad