Welcome to our Apple Music tips roundup, where we show you how to get the most out of  Apple’s music-streaming service. For more detail on Apple Music, check out our Complete guide to Apple Music.

Apple Music, Apple’s music streaming service and Spotify rival, arrived in 100 countries on 30 June 2015 as part of iOS 8.4 for iPhone and iPad, and is also available for Android, PC and Mac. Apple Music takes a bit of getting used to, so in this article we talk you through all of the features of Apple Music and how to use them.

If you haven’t got Apple Music on your iPhone or iPad yet, you can sign up here. If you’ve signed up to to Apple Music but haven’t set it up, visit: Apple Music FAQ. You should also make sure you won’t get charged for Apple Music once your three-month free trial is over.

Let’s start with the basics. Apple Music’s interface has five tabs: Library, For You, Browse, Radio and Search. 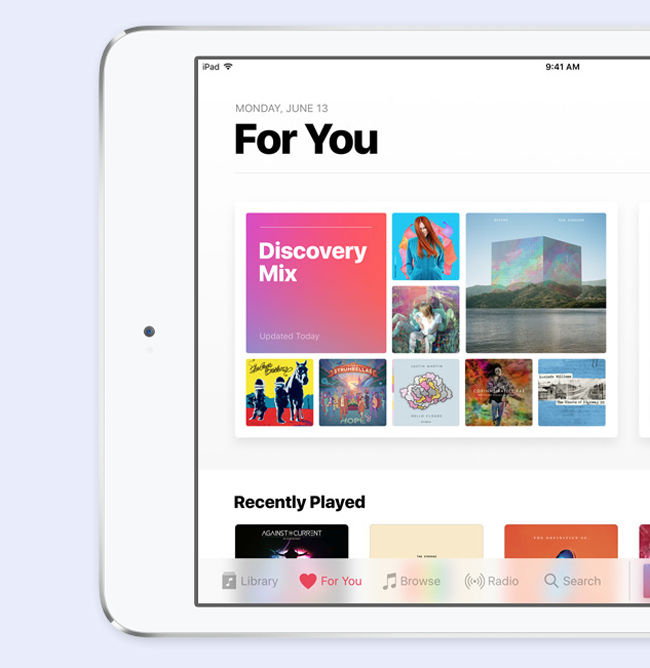 Through these tabs, you can browse albums, songs, playlists, see your downloaded music and, through the now playing tab, even see lyrics. In this article we’ll discuss what each tab does, and we’ll cover both the old and the new tab systems.

In this tab you can find your playlists, search for artists, albums, songs and downloaded music. You can even see your recently added music at the bottom of the tab’s page. Of course, you can edit the menus through the Edit button found at the top left-hand corner.

The For You section of the Apple Music app, which is accessible by clicking the heart icon on the bottom row of the screen, is where Apple presents music and videos that it thinks you will love, based on what’s in your music library, the genres and artists you chose during the setup process and songs that you’ve ‘Liked’ using the heart icon. It also displays albums and playlists you’ve been listening to recently. (Here’s how to clear your Recently Played list.)

Here, we’ll talk you through the For You section bit by bit, to help you get to know it.

In the iOS 10 redesign, Apple added a Discovery Mix to For You, so that you can discovery new music that suits your style. As you scroll down, you’ll be able to see various new sections, including daily curated playlists which are designed to set your day. At the bottom of the tab’s page you’ll be able to see what your favourite artists are posting through their own channels, allowing you to connect with artists.

How to improve your recommendations

When I (Macworld writer Ashleigh Macro, hi!) first had a look at Apple Music’s For You I was unsure how well it had worked – it was suggesting Justin Bieber’s greatest hits and an old Shakira live album, both of which do not appeal to my music tastes. However, when revisiting the app the following morning, Apple Music seemed to have the right idea. It suggested a Chilled-Out Pop playlist perfect to get me through the morning commute, several introductions to bands that it’s possible I’ll like, and a variety of albums that look interesting.

Plus, you can actually tap and hold on a recommendation for a menu that contains the “I don’t like this suggestion” option, which will help improve your recommendations for the future. Whenever you see the little heart icon, you can tap that to let Apple know that you like that song, album or playlist, which will also help the service get to know you and should improve the results.

You won’t need to launch the Apple Music app if you’re listening to a song you like when your phone’s locked. The heart icon will also appear on the Lock Screen, which you can tap at any time to let Apple know you love it. 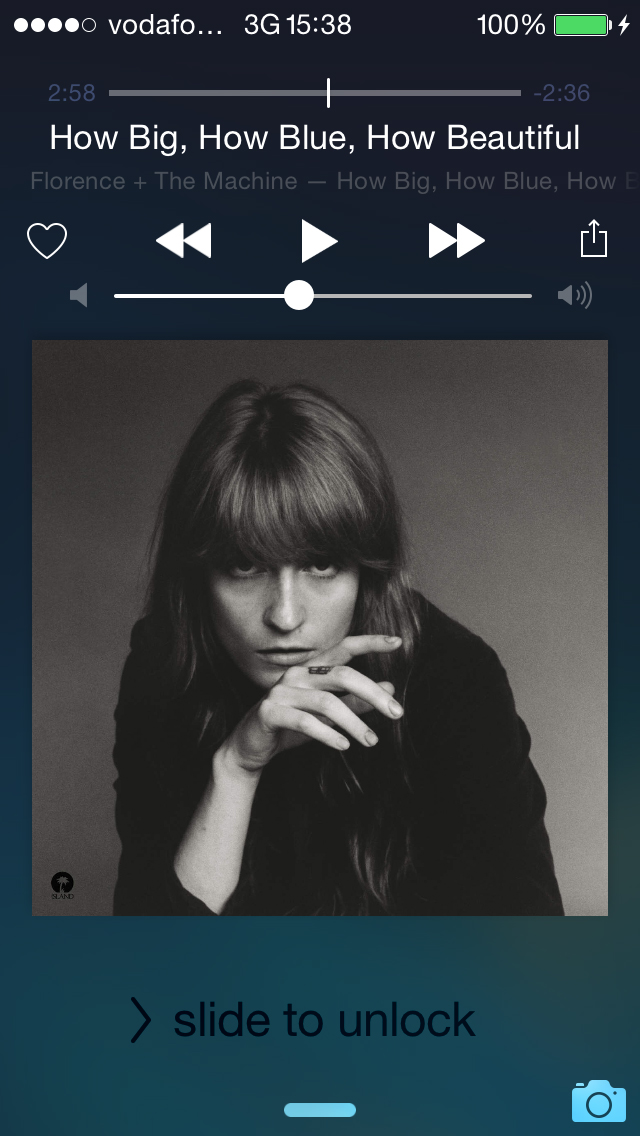 You’ll find that you can scroll almost infinitely on Apple Music’s For You page until you find something that takes your fancy. Swiping down from the top will also load a new set of playlist, album and artist recommendations. 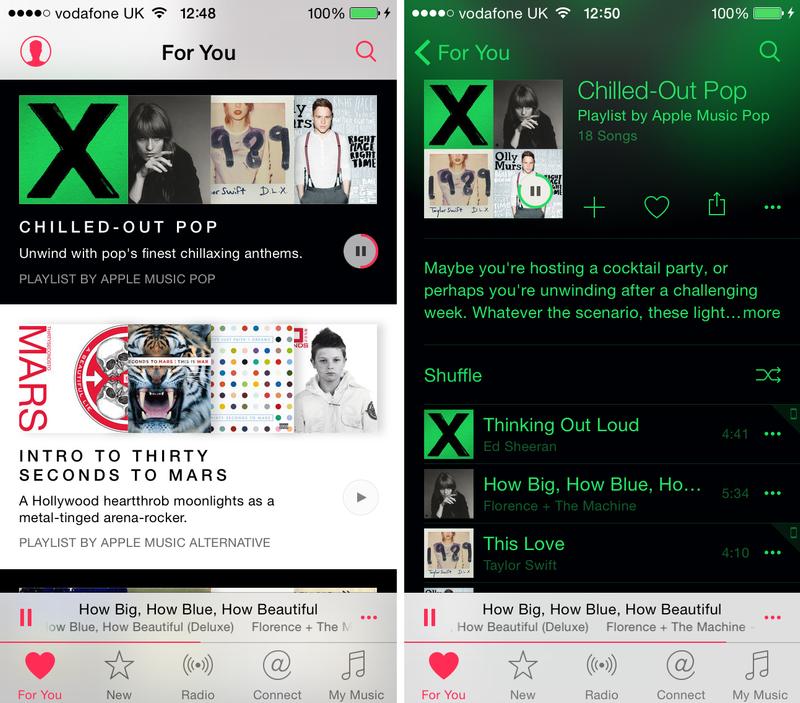 Listen to playlists & albums from For You

If, for example, you want to listen to that aforementioned Chilled-Out Pop playlist, just tap the little grey play arrow on that ‘card’. You’ll now see an additional bar appear along the bottom, showing what song you’re listening to and allowing you to pause it. It’s worth noting that iPhone 6s and 6s Plus users can also force touch a playlist to ‘peek’ at its contents without opening it.

You can tap that bar to see more details and controls for the song itself. There, you can choose the more option which the three dots and three lines symbol, and rearrange the playlist in your Up Next queue. 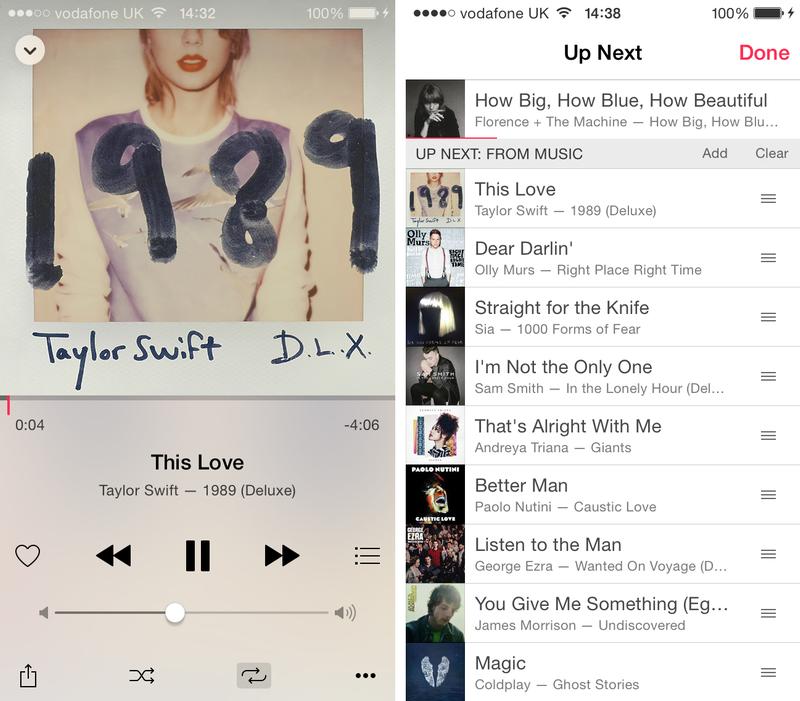 Tapping the three dots on the right of that bar along the bottom will bring up a menu of options that you’ll like if you’re enjoying the current song. 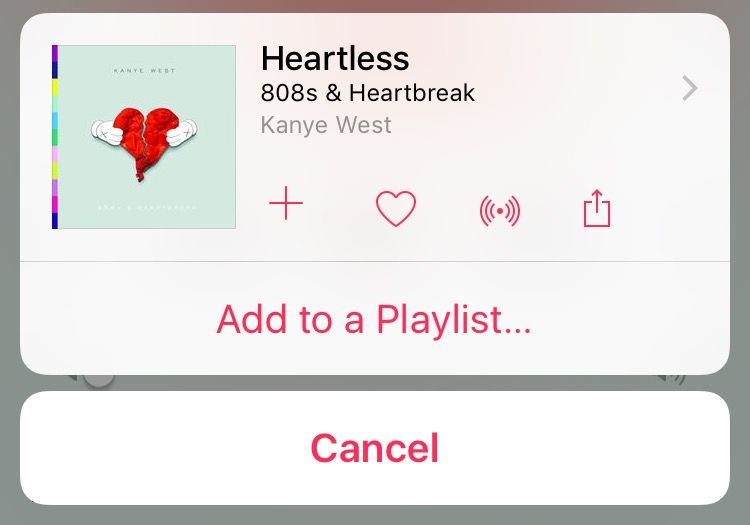 The ‘+’ icon will add the track to ‘My Music’, which means you’ll see that song when you go to the My Music section of the app. You’ll be able to listen to it any time you choose from there, as long as you have an Internet connection or have downloaded the songs for offline playback. If you’ve already got the song in My Music, this option won’t appear.

The heart icon helps Apple Music understand what kind of music you like, and improves the music suggestions on the ‘For You’ section of the app.

The third (and most odd-looking) icon will create a Radio station (we’ll talk more about those later) based on the song you’re listening to, where you’ll hear other songs from that artist and related artists.

You can take a closer look at the album of the song by tapping on its title, which takes you to a list of songs that are in that album.

If you really enjoy the playlist or album, you can add it and all of its songs to the My Music library by tapping the plus icon. It’ll become a tick if they’ve been successfully added. If you change your mind, tap the tick again to remove it from My Music. 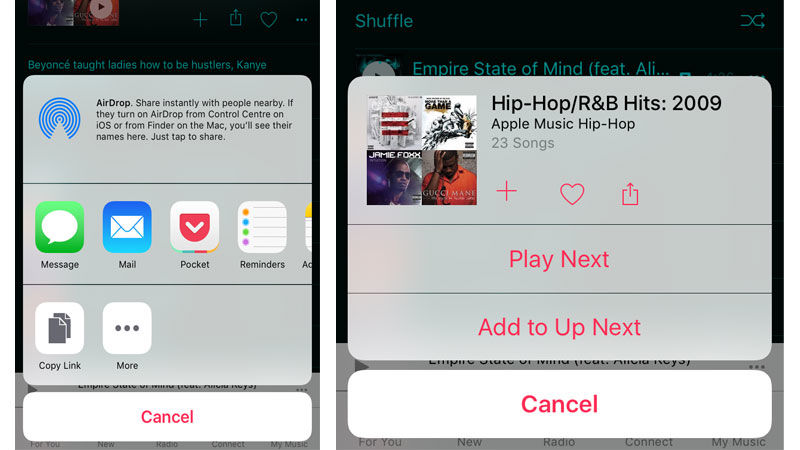 We’d recommend spending some time exploring the For You section and playing around with it. Make sure you tap the heart when you like something so that Apple knows how to make your recommendations better, and save some songs for offline listening if you spend a lot of time on the underground, for example.

If you want to transfer playlists to or from Spotify, incidentally, read How to move Apple Music playlists to Spotify.

As mentioned above, you’ll find the offline listening option when you tap the More icon on any playlist, song or album. Tap the first icon on the left (with a cloud and an arrow pointing down), and you’ll find that the songs are downloading in the My Music section of the app.

When you’re offline and want to listen, you’ll find the songs you’ve downloaded in the My Music section, either in Playlists or Library depending whether it’s a playlist or not. Offline songs will have black text and a phone icon next to the name while unavailable songs will be greyed out.

You can test whether the song is stored for listening offline by turning on Airplane mode from the Control Centre by swiping up from the bottom of the screen, or by looking out for the phone icon mentioned above. If you can play the song when Airplane mode is on, it’ll be available any time you’re out of Wi-Fi or 3G/4G range.

You can also make sure that the songs showing in My Music are only the songs available to listen to offline by clicking Albums and then turning “Music Available Offline” on (it’ll be green). 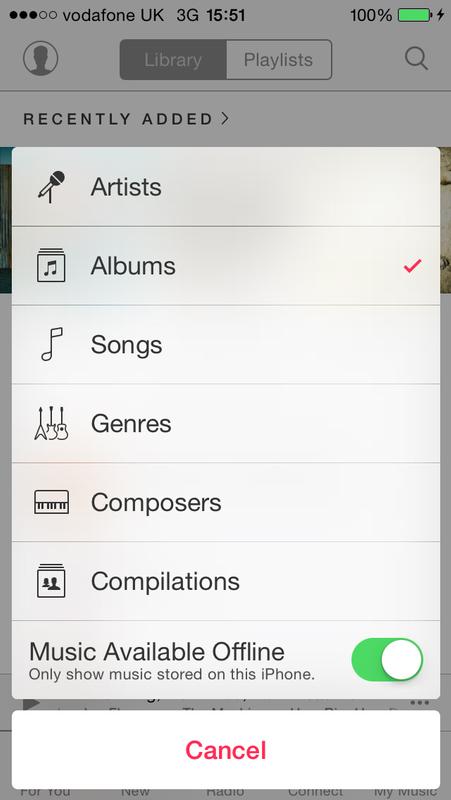 Here’s how to stop a song repeating.

In the Browse tab, you’ll be presented with a few options, such as New Music, Curated Playlists, Top Charts, and Genres – all of which allow you to search through songs that you like.

Browse is the third tab in the new iOS 10 interface. It doesn’t appear in the older interface, but somewhat corresponds to the old New and Connect tabs combined: artists that used to be followed using Connect now appear in the Browse tab.

Now we come to the Radio section of Apple Music, which is where you’ll find the new Beats 1 Radio station as well as various other Radio Stations, which are really just never ending playlists.

Read next: How to set up and use the BBC Music app

First we’ll take a look at the star of the show, Beats 1 Radio. If you’re wondering why it’s called Beats 1, that’s because Apple acquired Beats back in 2014. In fact, the whole of Apple Music uses lots of Beats expertise. 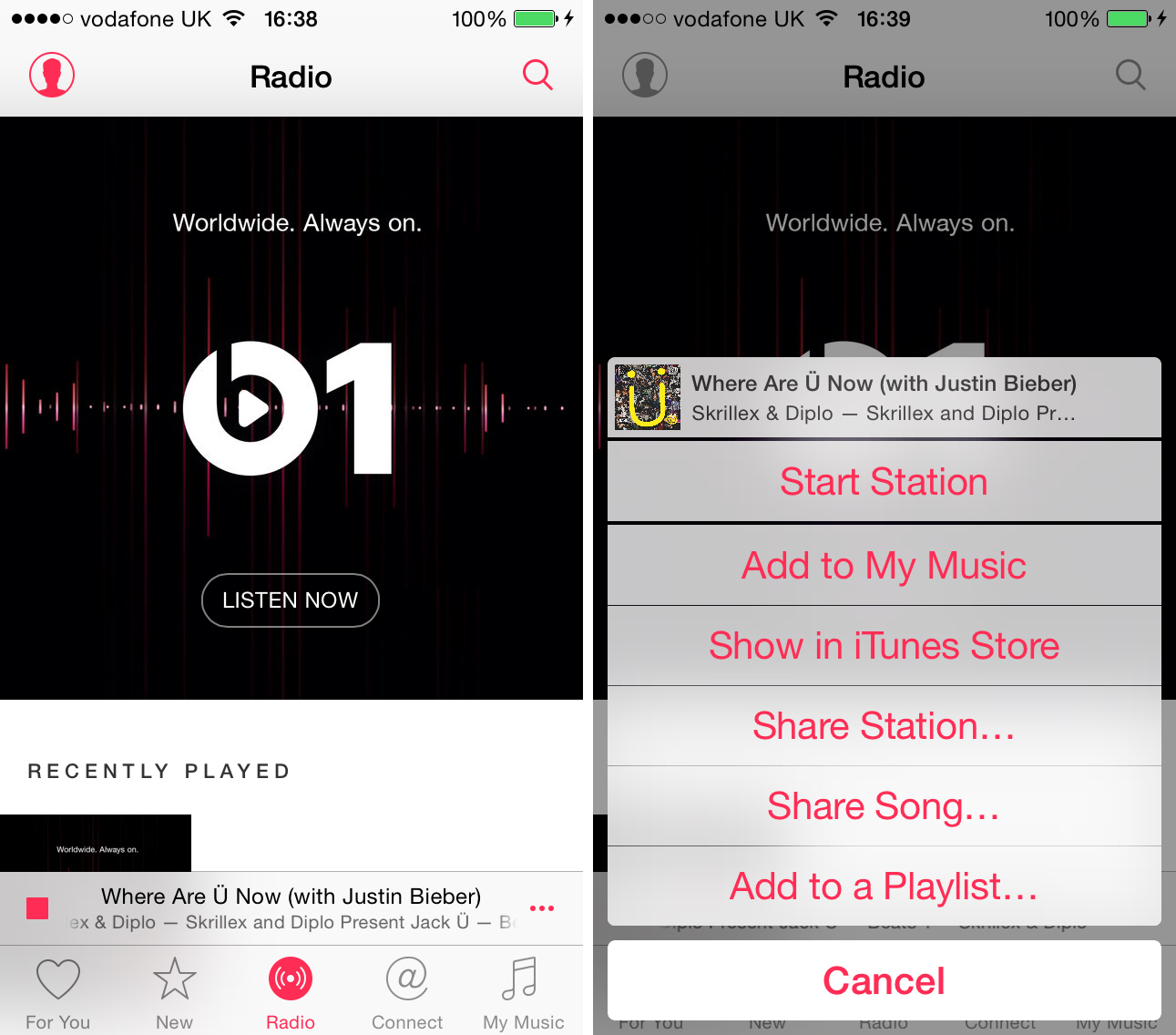 When you tap the Radio tab in the centre of the navigation bar of the Apple Music app, the Beats 1 will be the first option you get. Tap listen now and a bar will pop up along the bottom of the app to show you what song is currently playing. And just like when you’re listening to any other playlist, album or song in the app, you can tap the song to see the associated artwork and tap the heart to let Apple know you like it. Tap the three dots to add it to My Music and listen again later.

In addition to songs, Beats 1 also features interviews with artists and more.

Other radio stations available are slightly different. They don’t have DJs and aren’t live, so it’s really an endless playlist that you can listen to. You can also skip tracks you’re not enjoying. 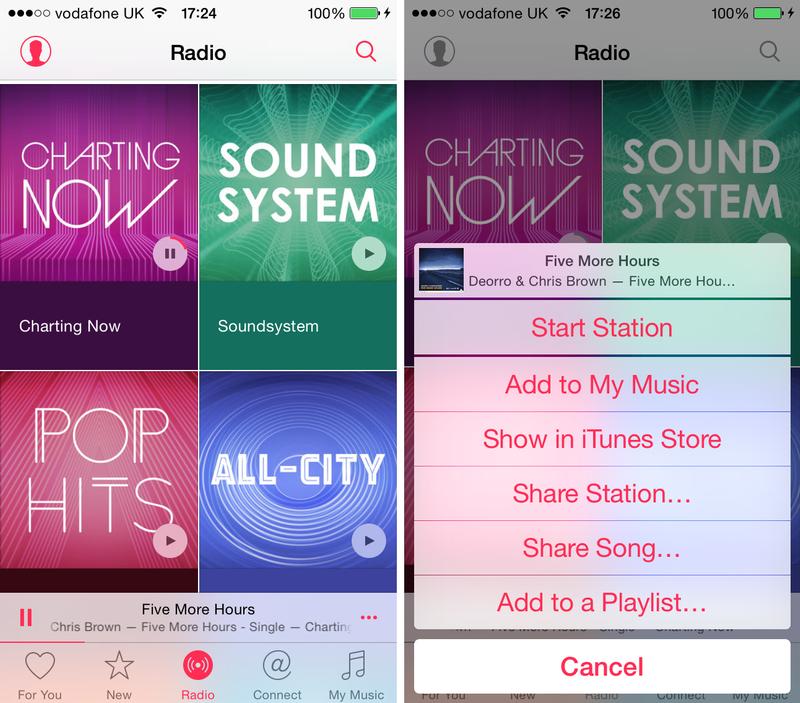 Preset stations you can listen to include Charting Now, Pop Hits, Workout Anthems, Chill, Kids & Family and lots more. Additionally, any time you’re listening to a song you can click the three dots in the bar along the bottom and choose Start Station to create a Radio Station that uses that song as inspiration for other songs and related artists to play you.

While preset stations were originally free to all iPhone users (not just those with an Apple Music subscription) Apple has recently backtracked, and now preset stations are only available to paid users.

How to view lyrics in Apple Music

You access lyrics under the revamped Now Playing interface. You’re presented with the album’s cover art, previous, play/pause and next buttons and a volume slider. As you scroll down, you’ll see the lyrics from your song – a new feature added by Apple so that you can actually read what the artists are singing about, or so that you can do a spot of karaoke.

Not every song is covered by this feature, of course, since it largely depends on label co-operation.

The last thing to talk about is your Apple Music account. Tap on the icon in the top left corner of the app to go to your Account details. You can add a profile picture and choose your nickname by tapping on your name at the top and then tapping Edit. 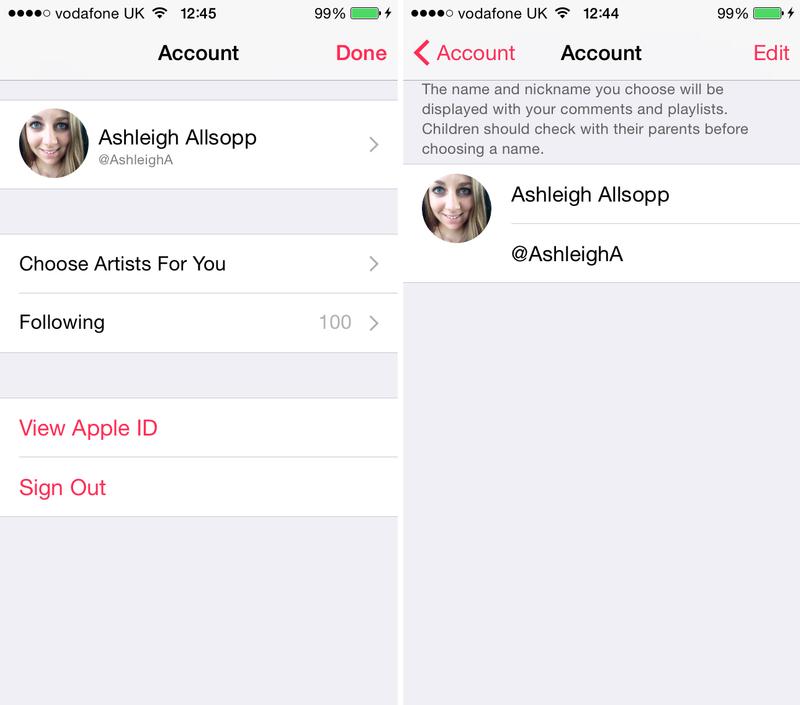 There, you can also go back through the setup process of choosing artists you like if you think your recommendations leave a lot to be desired. You can also edit the artists you’re following there.