One of the biggest frustrations about iCloud on iOS 8 was  the fact that, unlike on OS X where you can view your iCloud files and folder via the finder, on iOS devices it wasn’t simple to access the iCloud files unless you open the app you wished to access them from and then search for them there. Luckily that’s all changing when iOS 9 launches on 16 September.

One of the best new features coming in iOS 9 is a new app for iCloud Drive that provides a proper file browser for iOS devices. This is one feature that we’re really looking forward to, because, let’s face it, in iOS 8 iCloud Drive has been a bit of a disappointment.

When it was first launched back in 2011, the original iCloud service allowed you to share photos and emails across all your Macs and iOS devices, as well as files that you created in Apple’s suite of iWork apps – Pages, Numbers and Keynote. However, you couldn’t use iCloud to store or sync other types of files, such as Excel spreadsheets or documents created in Microsoft Word. 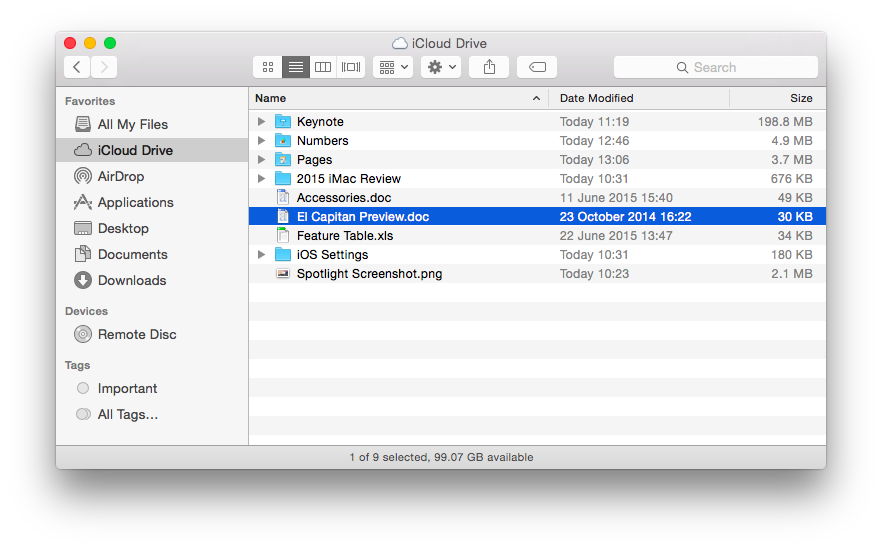 Apple went some way to address the problem of accessing iCloud stored files when it introduced iCloud Drive for the Mac with Yosemite in 2014. If you’re running Yosemite on your Mac you’ll see your personal iCloud Drive listed in the sidebar of the Finder window (see image above), and you can simply click on this to view the contents of iCloud Drive in a window on the Mac desktop, just like any other type of folder.

You can also move any type of file in or out of the iCloud Drive folder simply by using your mouse, and create additional folders within iCloud Drive to help you keep everything organized. This means that you can now store just about any type of document or file in iCloud Drive, regardless of what apps you used to create those files.

However, prior to iOS 9 there was no equivalent iCloud Drive folder on the iPad or iPhone and the only way to access files you had saved to iCloud was to open the relevant app and locate it within the file structure within the app.

iCloud Drive didn’t work quite so well on iOS devices prior to iOS 9. There was no equivalent of the Mac’s Finder in iOS 8 or earlier, so you can’t simply open a folder on your iPhone and iPad in order to view the files that you have stored in iCloud Drive. Prior to iOS 9 the only way to view documents stored in iCloud Drive was by using Apple’s iWork apps, or third-party apps that have been updated to support iCloud Drive – you could only view the iCloud stored files thorough the file browsers inside those apps.

The new iCloud Drive app that will be included in iOS 9 should change that, and provide the fully-featured file browser that we need to manage the contents of iCloud Drive on iOS devices.

You may not realise that these improvements to iCloud Drive have been made in iOS 9 when you first download the update. This is because the iCloud Drive app doesn’t automatically appear (or at least it didn’t in the beta). You need to go to Settings > iCloud > iCloud Drive, and toggle on the switch next to Show on Home Screen to turn it on.

Once you’ve enabled the app, you’ll find all of your iCloud Drive documents within – so there is no longer any need to open an app before you can open a file, you can tap on the file to open it in the relevant app instead (which is particularly handy when the file in question has a choice of apps you can open it in.

The iCloud Drive app file structure is pretty basic and similar to the folder and file experience you’d get on your Mac. Tap on any file to preview it in iCloud Drive or choose to move that file to a different iCloud Drive folder, trash it, or share it. 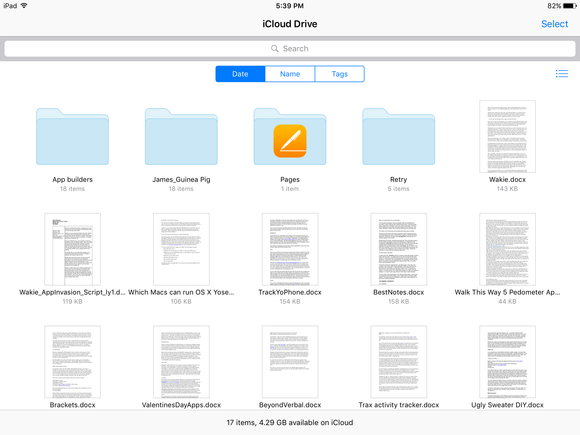 If you want to edit the file in question it’s not a question of tapping on the file, as that just opens an iCloud preview, instead you need to tap the Share button in the top right corner and select the app you wish to export the file too. Here you will be able to edit the file as much as you like (depending on the limitations of the app).

You may find that a new version of the edited file is saved in a different folder in iCloud Drive. iCloud Drive tends to creates folders for each of the apps you’ve used to manage documents, meaning the Word document you’ve worked on in Pages will likely end up in the Pages folder rather than overwriting the original. But at least the changes you make will sync back to iCloud, and you can access the ammended file on any device synced with your iCloud account.

Read next: How to fix an iPhone that keeps asking for your iCloud login and password

If you look at the iCloud Drive folder, found via the Finder on your Mac, you’ll see that it already contains three special folders for Pages, Numbers and Keynote. When you use any of those iWork apps to create files you have the option of storing the files ‘locally’ on your Mac’s hard drive, or online in iCloud Drive. If you decide to store your files in iCloud Drive then those files will be available to any other Macs or iOS devices that also have iCloud Drive activated.

If you are still running iOS 8, there are some options for using iCloud Drive with iWork apps on iOS devices.

The iCloud Settings panel in iOS 8 had a master switch that could turn iCloud Drive completely on or off for that device, along with individual controls for Pages, Numbers and Keynote. When you turn iCloud Drive on for any of these apps then the files that you create with these apps are automatically stored on iCloud Drive.

And, as you’d expect, you can view and open Pages, Numbers and Keynote documents that were created on other devices too. The problem here is that, as we’ve already mentioned, iOS 8 doesn’t have an equivalent of the Mac Finder that would allow you to work with documents and files created in other apps.

Apple has provided a partial work-around for this problem, though. When you launch any of the iWork apps on your iPhone or iPad, the apps start by displaying a document browser window that shows the contents of that app’s iCloud Drive folder. Each app will then allow you to open any type of document supported by that app. As well as having several Numbers documents stored in iCloud Drive I also have a couple of Excel spreadsheets that I created on my Mac, and these are shown in Numbers as icons that are cleverly labeled with a great big ‘E’ for Excel. Numbers can import and export Excel files, so I can now open and edit those spreadsheets using Numbers on my iPhone or iPad. And, in the same way, I can use Pages on iOS to open Word documents, or Keynote to open PowerPoint presentations that I have stored in iCloud Drive.

There’s a slight problem here, though. By default, Pages, Numbers and Keynote on iOS only display files and documents that have been placed directly inside each app’s individual sub-folder in iCloud Drive. So I had to remember to place those two Excel spreadsheets inside the Numbers folder in iCloud Drive on my Mac before Numbers on my iPhone could even see them.

And, again, there’s a slightly cumbersome work-around for this. If you tap the ‘+’ sign up in the top-left corner of the document browser in Pages, Numbers or Keynote on iOS, then you can either create a new document or import an existing document. One of the options here is – somewhat oddly – the ability to import a document from iCloud Drive. When you select this option in Pages, Numbers or Keynote each app displays – miracle of miracles – a file browser window that shows you the entire contents of your iCloud Drive. You can then move from folder to folder in order to find the files that you need.

This in-app file browser is still pretty limited, though, and doesn’t allow you to create new folders, or move files around as you can with iCloud Drive on a Mac. Apple didn’t go into a lot of detail about iCloud Drive when it unveiled iOS 9 last month, but those are precisely the sort of features that the new iCloud Drive app will need if it is to match the simplicity and ease of use provided by rival cloud services such as Dropbox.

Read next: How to use Apple News