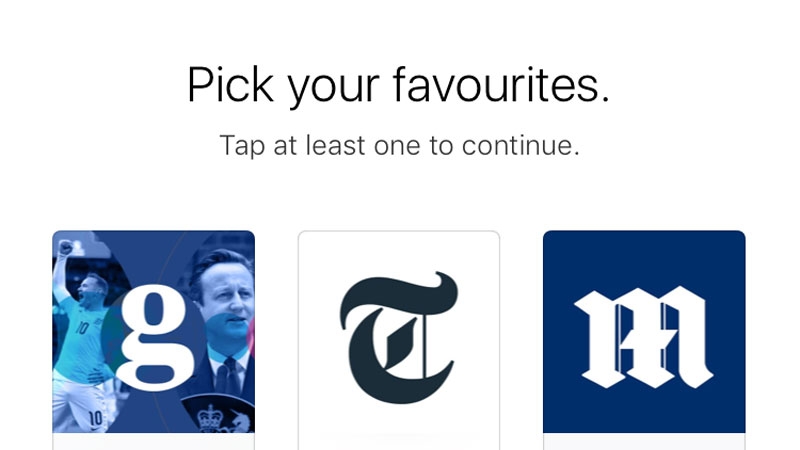 Apple News is Apple’s latest attempt to make newspapers and magazines relevant in an era of smartphones and tablets and it was supposed to be coming in iOS 9, which launched on Wednesday 16 September. However, for UK iPhone owners there was no sign of it in that update. iPhone owners in the UK had to wait until iOS 9.1 was ready for download at the end of October before they could get their hands on the new app.

Apple News presents news as a dynamic feed – a personalised digital magazine of sorts with stories taken from various places. This is in contrast to the old Newsstand app which displayed virtual periodicals.

According to Apple’s vice president of product marketing, Susan Prescott, this results in “beautiful content from the world’s greatest sources, personalised for you”. And Apple adds that you’ll “no longer need to move from app to app to stay informed”. This is a system all about convenience and perhaps another slap in the face for Google, in keeping you away from the web.

Many are likely to look at Apple News and draw parallels with apps such as Filpboard, Feedly, and the various RSS readers that are available for the iPhone and iPad.

How to get Apple News in the UK

If you haven’t updated to iOS 9.1 and aren’t based in the US, you won’t have the Apple News app. If you want to use it, all you need to do is upgrade to the latest version of Apple’s iPhone operating system. You can do so by tapping Settings > General > Software Update and updating your iPhone. Australian iPhone users have also now got access to the Apple News app.

What if you live outside of the UK, Australia or America: if there any way to get the Apple News app? Luckily there is:

This will allow you to give the News app a try and see just what you are missing.

You may find that local publications are missing from the newsfeed – after all the reason for the delay in getting the News app in your country may be because Apple needs some time to do official deals with local publications.

That said, when we followed the above steps prior to the 9.1 update to get the USA version of the News app on our iPhone we found plenty of local news sources including The Guardian, The Telegraph, Mail Online, Financial Times, Sky News and a few others. 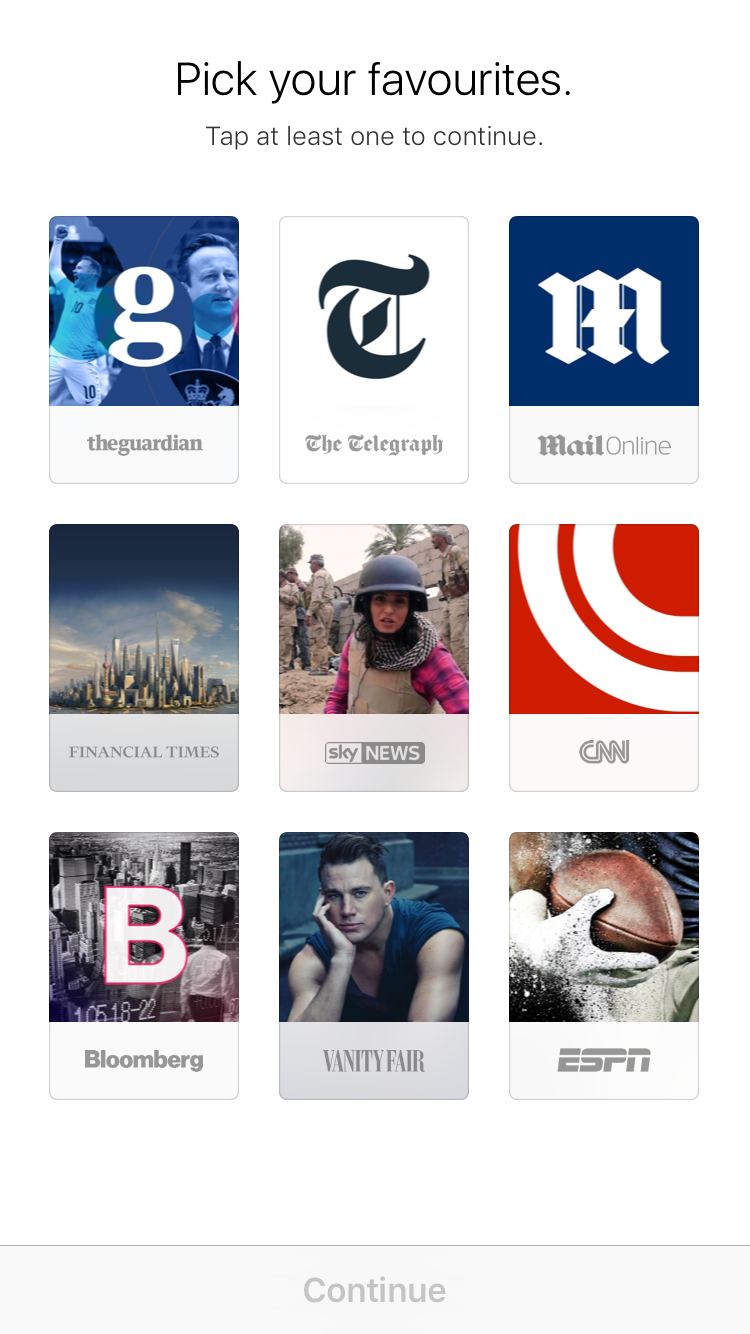 There were also options for types of news included Royalty, Euro, United Kingdom, European Union, UK Politics, Labour Party UK, Conservative Party UK, so we can’t imagine for a minute why Apple didn’t deem the app ready for a UK audience. It even had the Radio Times!

You can look though these suggested news outlets and select the ones you want included in your feed. 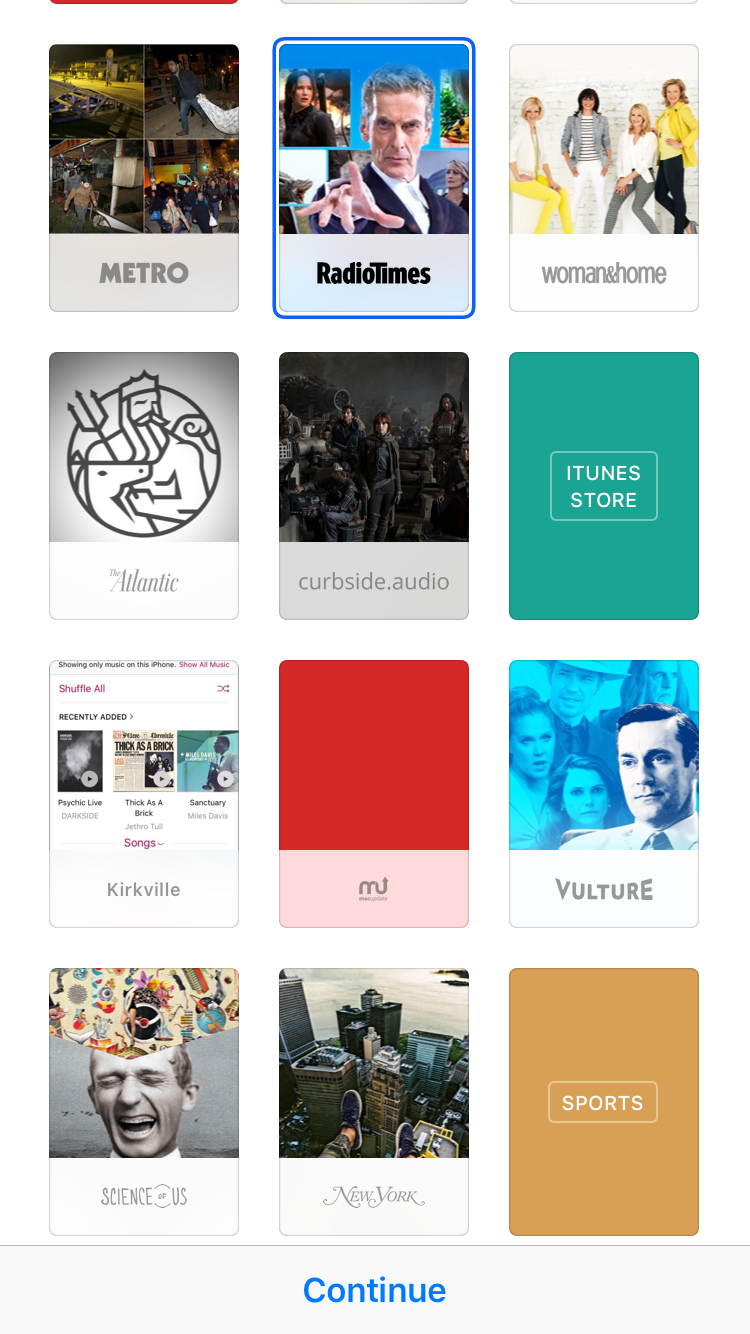 There is another way to see News on your iPhone which is unrelated to the News app. If you swipe left from the home screen the proactive options show you headlines from today so you can stay up to date with the latest news. These tend to be national stories about current events.

Getting started with Apple News

On first launching the Apple News app, it needs to get a sense of what you like. You select from a list of publications and topics, and News then creates your personalised feed (it’s a little bit like setting up Apple Music). Called ‘For You’, it presents all your news in one place on an easily scannable grid of images and headlines, and it updates every time you check the app.

On selecting a story, it opens for you to read. If it’s been created using Apple News Format, you’ll potentially get especially rich layouts and animations, along with inline photo galleries and Flickr-like photo mosaics. If you find you don’t have time to read something that looks really interesting, and don’t want to risk ‘losing’ it, the article can be bookmarked for later.

News constantly analyses whatever you read, its aim being to get better at showing stories you’re interested in. Apple notes, though, that News was designed from the ground up with privacy in mind – so what you read is not linked to other Apple services, and individual data is not shared with third parties.

If Apple News isn’t quite hitting the right spot, you can tap the Explore button and rummage around a range of publisher channels and topics. Apple states that News tracks more than a million of the latter, and you can drill down into very specific topics via Search. Should you then wish to focus on any given topic or publication you’ve expressed an interest in, you can do so via Favorites. With publications, this is fairly close to a more typical magazine experience, albeit with the various interface and layout conditions and restrictions News imposes.

Apple News isn’t a new idea – it’s merely Apple’s take on news aggregation. As such, plenty of alternatives already exist, the closest to News perhaps being Flipboard. This free app has a similar on-boarding process to News, building a personalised feed from selected topics; its grid of articles looks broadly similar, too, but its ‘flip’ page turns when reading articles provide a neat visual and gestural link to publishing’s past. Flipboard also appears to have some advantages over News, not least its cross-platform nature, but also through its social awareness – you can flip through Twitter feeds and create magazines that can be easily shared.

Beyond alternate aggregators – such as News Republic, News360 and stalwart Digg, you can instead take news curation into your own hands. The aforementioned systems and services – including Apple’s – are essentially fancy RSS readers, and there are some great RSS readers for your iOS device, such as Reeder and Unread. These lack the fancy animation and gimmicks of News and Flipboard, but tend to feel more efficient as a result.

Articles are stripped back to plain text and images (but usually with readable global typography that can be tweaked). However, these apps don’t ‘learn’ what you like – on subscribing to feeds, you must scroll through all the articles being churned out, in order to find something to read. (On the flip side, you won’t miss something because your app didn’t think you wanted to read it.)

What will happen to the Newsstand app?

The main change is that magazine and newspaper apps will no longer display custom Newsstand cover art or per-issue art. Instead, they’ll just display their standard app icon.

How publishers can get their content on to Apple News

Regardless of the quality of other news apps, Apple News has a big advantage over its rivals, in that it’ll one day instantly appear on many millions of devices when they’re upgraded to iOS 9. Therefore, if you’re a publisher, it’s a smart move to ensure your content can be found on Apple News.

You can start the process by visiting icloud.com/newspublisher and signing up with an Apple ID. You then enter your information (name, address, and so on) and details about your channel – the home for your content.

At present, Apple News requires you to submit one or more RSS feeds and a logo in transparent PNG format, 256 px high and up to 2048 px wide. Apple recommends images within articles be high-resolution JPEGs, PNGs or GIFs, and all text-based content have functional links and assets. Sponsored articles must be flagged as such, and all content must be in the same language.

Content can be monetised via iAd, with publishers retaining 100 per cent of revenue from ads they sell, or 70 per cent when Apple sells on their behalf. In the near future, Apple will provide details of Apple News Format, which outputs content optimised for iOS devices that renders quickly, boasts the “beautifully crafted layouts” mentioned earlier, and includes tools for measuring user engagement.

Apple adds that readers can “report concerns about articles they find offensive or problematic” and too many complaints of this sort may lead to Apple having to “suspend or disable your channel”. This should set some alarm bells ringing, given Apple’s tendency to be censor-happy at times. Journalists have also raised concerns about a company like Apple potentially having so much control over news. Will big companies push out independents and effectively own the system? What happens if a publication is heavily critical of Apple or goes against the company’s philosophies? And will News erode the very idea of news and magazine brands, their articles becoming meat for the grinder?

Time will tell, and we’ll find out for sure this autumn, when Apple News makes its debut with iOS 9, initially starting out in the USA, UK and Australia.

Should I update my iPad or iPhone to iOS 9? Plus: how to get iOS 9

How to use Proactive in iOS 9