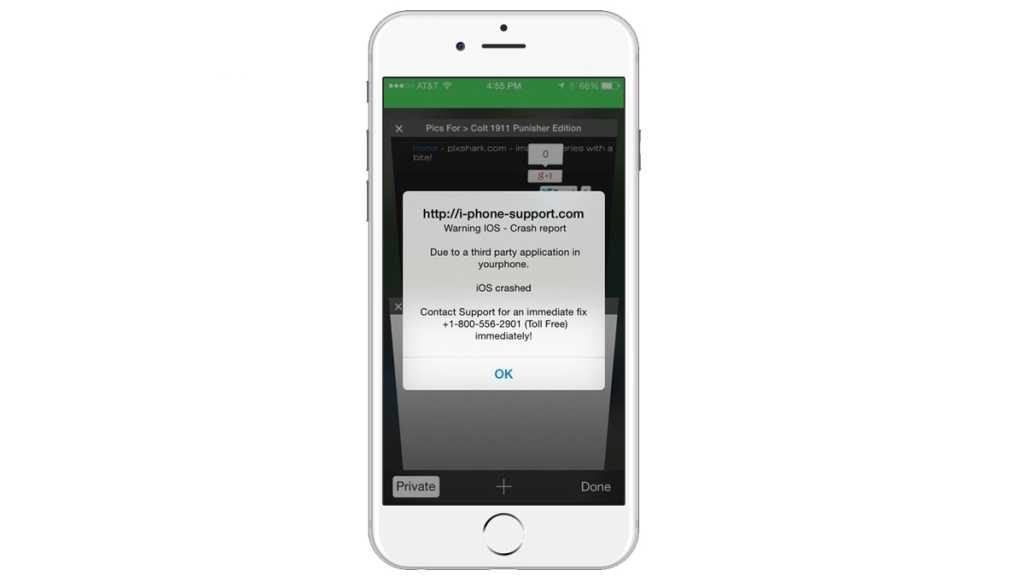 There have been numerous reports of a scam targeting Apple users, which could possibly cost those who fall for it up to £50. The scam was first reported in the US around 9 months ago, and while it seemed to be exclusive to the US, it seems to now be affecting users in the UK. So how can you identify this scam, and more importantly, how can you get rid of it without your valuable information being stolen? Read on to find out.

See also: How to update to the iOS 9 public beta

iOS Crash Report scam: What is it?

It warns users that their details will be stolen if they don’t call the number immediately, but of course, users are urged not to call the number as it isn’t true. When users do call the number, a person answers the phone and claims that a third-party has been removing information from their device and that they need to pay money over the phone for the ‘representative’ to “reinstall iOS”. However, in reality all the user is doing is handing over their bank details to scammers.

Nobody is sure of how these pop ups are appearing, but a popular theory among users is that certain website adverts have been infected with malicious code, transforming them into the ‘crash reports’ people are seeing on their iOS devices. It’d make sense if that was the case, as there are reports of the pop up appearing on otherwise popular and reputable websites.

Apple forum user Dizzer88 called the number last November to see what would happen, and posted the experience on an Apple forum about the scam. “I just had the same scam this evening.” Dizzer88 wrote. “I too called the phone # to see what was going on. It went straight on hold when I called (didn’t ring) and then when someone came on the line, it was a woman who I could barely hear due to the noise in the background.”

The woman apparently stated that the users iPhone 5S software had crashed, and that a third-party was stealing all their information. She then went on to claim that for $80 (around £51.50), she could reinstall iOS for them – all they had to do was hand over their credit card information. “So I said that was ridiculous as I had been using apps and my phone the whole time I was talking to her on speaker and said I would call Apple Support directly. She told me they would say the same thing about having to pay to have iOS reinstalled on my phone.”

At this point it was evident that Dizzer88 had had enough; “I said I highly doubt it and told her I wouldn’t pay the money and that she was essentially full of c**p.” After this confrontation, the representative on the other end of the phone simply said “OK ma’am” and hung up.

Read next: How to spot a ‘free iPhone’ scam

iOS Crash Report scam: How do I get rid of it?

So, the most important question right now is “How do I get rid of it?” and we’re happy to say, it’s a pretty simple process. The most effective way to get rid of the pop up is to double click your home button to enter the multi-tasking menu, then simply force close Safari. Upon reopening, the popup should be gone.

If for some reason the pop up still appears after force closing Safari, there’s another fix available. Simply toggle Airplane mode on, force quit Safari, head to Settings > Safari and tap “Clear History and Website Data”. Once you’ve cleared your history and website data, re-open Safari and the pop up should no longer appear.

If you want to avoid becoming victim to these kinds of scams in the future, there is some pre-emptive action that you can take, in the form of enabling Safari’s built in pop up blocker. This can be done by heading to the Settings app, selecting Safari and making sure that “Block Pop-Ups” is toggled on under the General submenu.

iOS Crash Report scam: How can I spot potential scams in future?

So now you’ve avoided potentially handing over up to £50 to scammers, how can you protect yourself against potential iScams in future? The first rule is a rule for scams in general: if it’s too good to be true, it probably is. This is most relatable when talking about the “Share for a BRAND NEW iPHONE 6” posts on Facebook, as well as adverts online – check out our article about the free iPhone scam for more information.

As well as this, Apple will never ask for your credit card information or your Apple ID login information over the phone or online.

It’s also worth looking at the pop up/email/whatever kind of scam it is in detail, especially the spelling and grammar. We’ve noticed that with the many scams we’ve seen over the years, scammers seem to have an issue with general spelling and grammar, an issue that any official Apple pop up/email would never have. Even if it’s just a single spelling mistake or a grammatical error, it’s worth questioning its authenticity before handing over any valuable information.

See also: 33 tips for improving the battery life of your iPhone