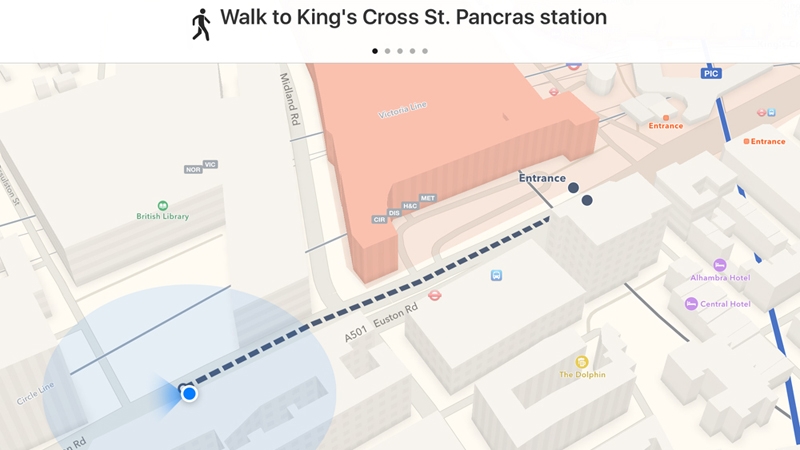 At long last Apple has added public-transport directions to its Maps app – or at least it has revealed that it will add this feature when iOS 9 launches in September.

(At time of writing the new feature is only available by downloading the pre-release beta version of iOS 9, which is what we use throughout this tutorial. Some graphical elements may have been tweaked by the time the official final version of iOS 9 comes out – it is due to launch on Wednesday 16 September – but we’d be very surprised if the way the feature works changes substantially.)

Planning a route that incorporates public transport is easy. Here’s how to use public-transport directions in iOS 9 Maps.

Read next: Apple Maps vs Google Maps comparison review |  is Apple Maps down?

How to use public-transport directions in iOS 9 Maps

Open the Maps app and tap on the search field at the top of the screen. (You’ll notice some additional icons have been added here, allowing you to filter nearby items of interest according to health, travel, food, shopping and other categories, as well as sub-categories such as dentistry, bakeries, hotels and so on.)

Enter the destination you wish to travel to, such as (in this instance) ‘Natural History Museum’. You can type in the name of your destination, if this is appropriate – in which case Maps will offer potential destinations while you type – its address, or just a postcode. 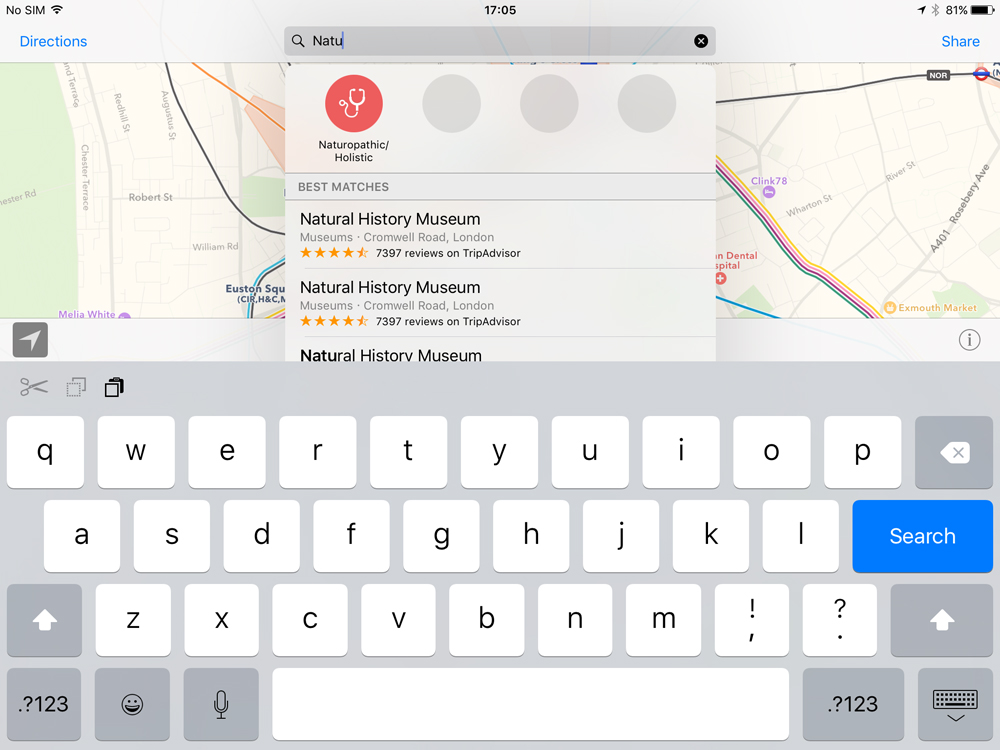 Since Maps is offering the correct destination, we’ll tap the preferred choice – in this case, slightly buggily, Maps is offering us the same museum twice in the list of options: always expect bugs and glitches in beta software – and Maps jumps to the location of the Natural History Museum. 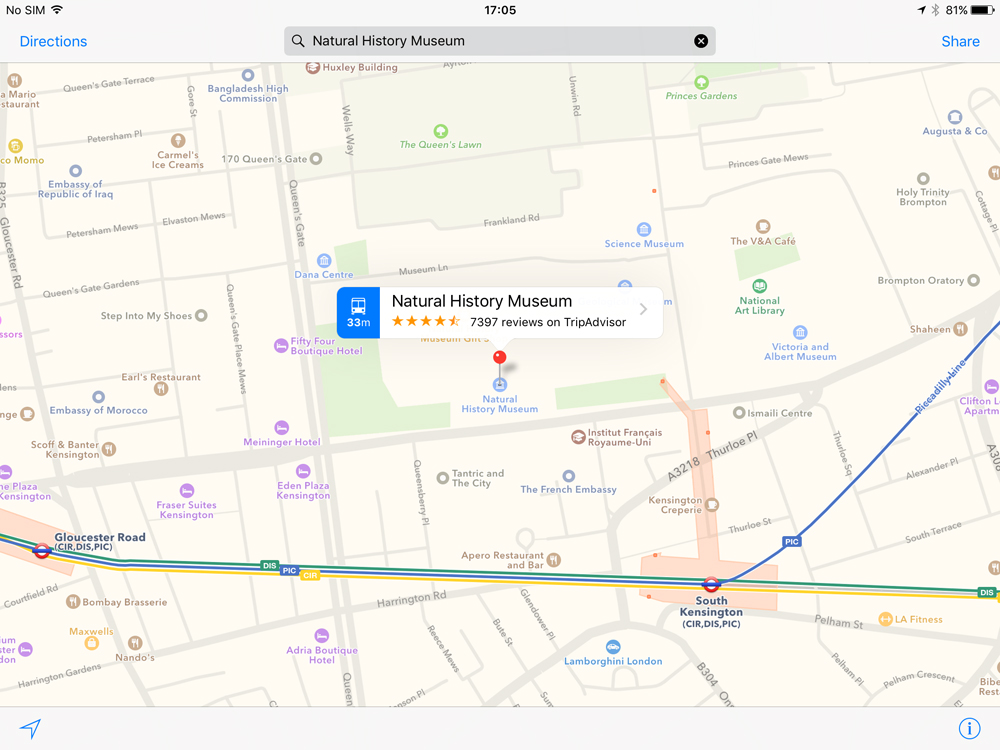 The pin has an icon of a train (or possibly a tram?) on the left, with a time underneath. That signifies a public-transport route, from where you are now to the location you searched for, and – fairly obviously – how long it’ll take if you leave now. Tap the icon and Maps will show you that route in more detail. 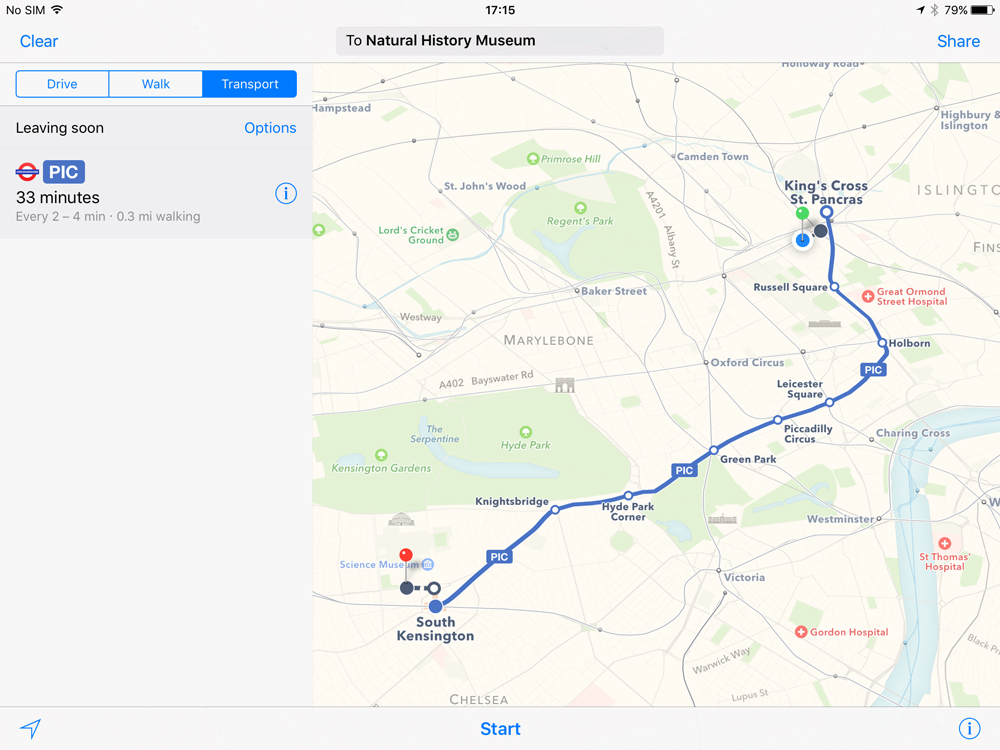 Our route to the museum is pretty straightforward: just scoot down on the Picadilly Line. What does it look like if we ask for something slightly more complicated – say, a journey down to Tooting Lido? 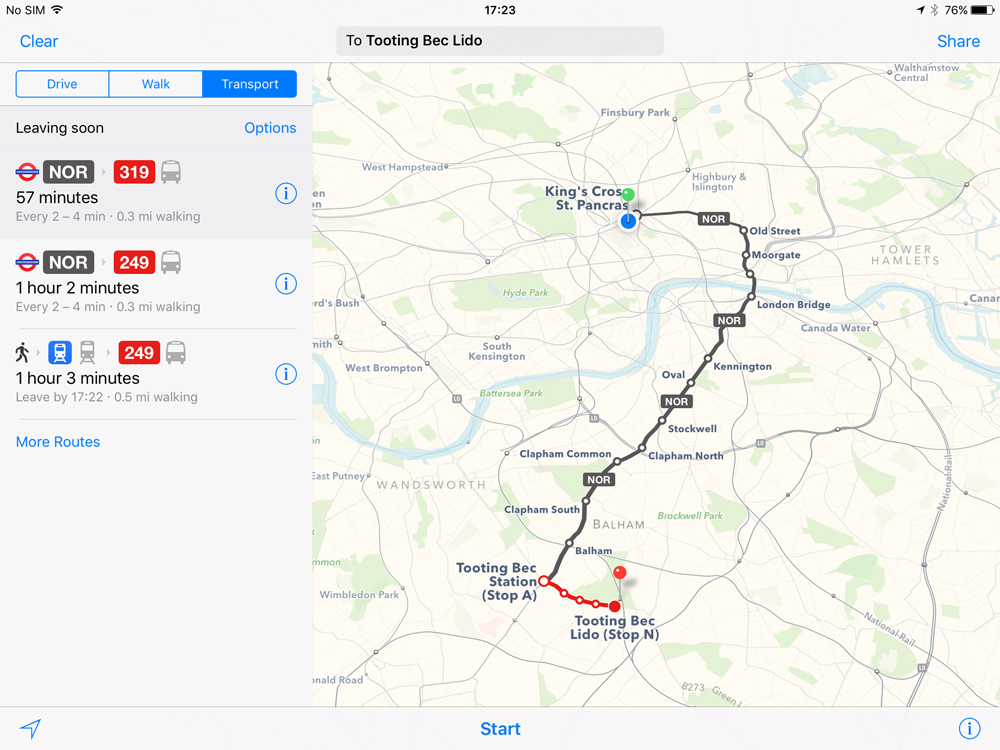 For one thing, this route is going to involve changing lines at some point, and you can see the colour-coded segments of the journey clearly laid out on the map. But because of this added complexity, Maps recognises that there are multiple routes that you may wish to take. It has defaulted to the quickest route above (Northern Line down to Tooting Bec, then change to the 319 bus) but you can tap one of the alternative routes to see that displayed on the map.

Once you’ve selected your route, tap Start at the bottom to begin the journey and get directions as you go; alternatively you can tap the lower-case i at the bottom right to toggle between 2D and 3D mapping, and to report any problems you encounter. 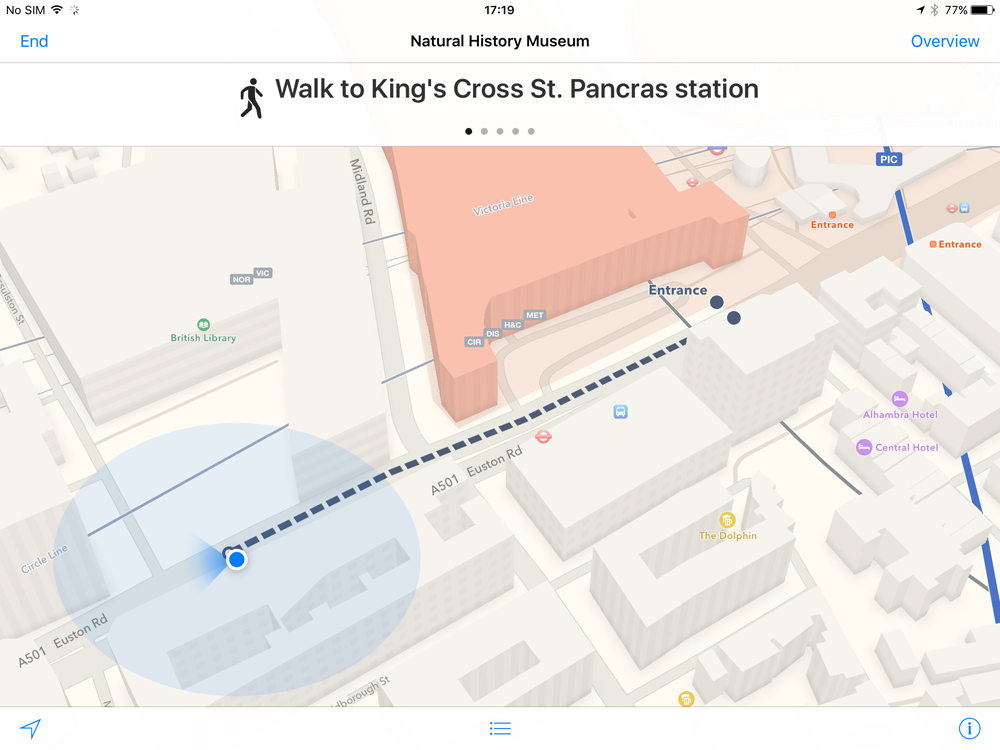 Once you get started, you can tap the triple-line icon at the bottom-centre of the screen to see the steps that Maps will be walking you through. As you will appreciate, the steps will generally be fewer in number than for a driving route; instead of ‘left here, then third right, then carry on 4 miles, then left at the roundabout’, Apple Maps just has to get you on and off the correct buses and trains. 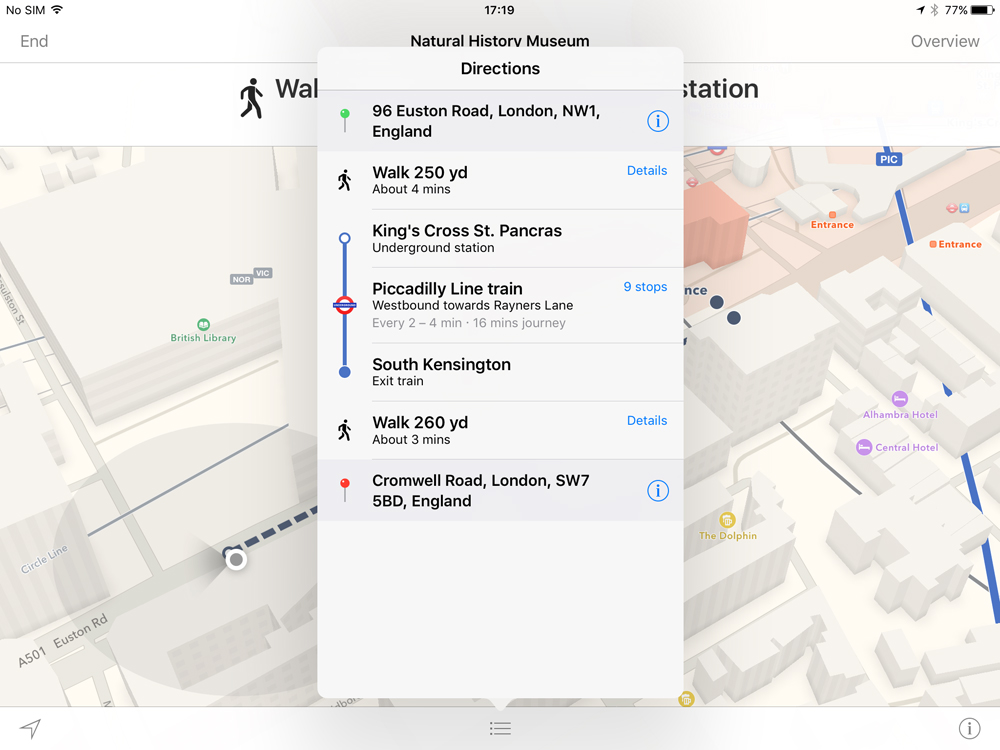 You should also bear in mind, when planning a route involving the Tube, that your device is likely to lose its bearings shortly after you go underground.

If you’d rather drive or walk than take the Tube, by the way, tap the tram/train icon and then, under the Directions tab on the left, select Drive or Walk. In future searches you may find that the default icon offered next to a searched destination is a car or pedestrian. 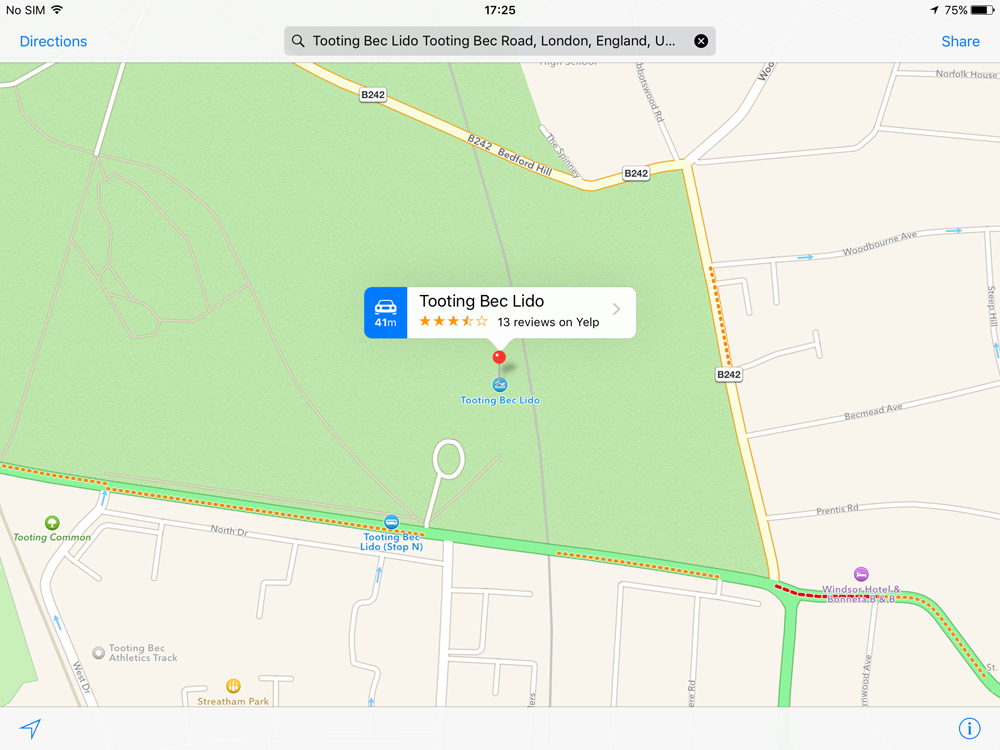 How to use Maps in iOS

If you aren’t familiar with Maps in iOS because you have stuck with Google Maps since the launch or the Apple Maps app (and the fiasco that followed). Here’s how to use Apple Maps on your iPhone (or iPad).

When you open it, Apple Maps in iOS shows your current location with a pulsing blue dot. If you don’t see it, press the arrow in the blue square in the bottom left of the screen.

You can see a 3D map (if there is one of your location), or switch to Hybrid or Satellite modes by pressing the i button on the botton right. Here you can also select the following options: Drop a Pin, Report a Problem, and Show/Hide Traffic.

You can also share a location (using Messages, email, Twitter, Facebook, or AirDrop), add a bookmark, or send directions to another iPhone or iPad (or even Mac) via AirDrop. Just press the Share icon in the top right. Here’s also where you can add a Favourite.

To get directions from where you are currently, tap on the search field at the top of the screen and type in an address or post code, or select a Favourite. Then tap on the tab that appears above the locaiton, and scroll down until you see Directions to Here or Directions from Here.

The Maps app will automatically choose your current location as your Start position (but you can change this if you want just by tapping on that tab and putting in another address. The End location will be the location you just selected. Tap on Route.

The route will default to Drive, in addition, currently there is also the option for Walking directions. From iOS 9 Transit (e.g. trains and buses) should join the options here, at least if you are in London – more on that above.

You’ll get a rough idea of how long it will take to drive the route, you’ll see red dots where there are significant amounts of traffic, and yellow dots where the traffic is just slow. You will get multiple routes – three on total – to choose from and you can select the one that appeals (or the one that shows as taking the least amount of time).

Macworld poll: WIll you update to iOS 9?

That’s it for this tutorial, but what do you think of iOS 9 so far? Are you impressed enough by the beta that you plan to install the full version when it launches in September?

Have your say in our poll:

Read next: How to downgrade from the iOS 9 beta to iOS 8