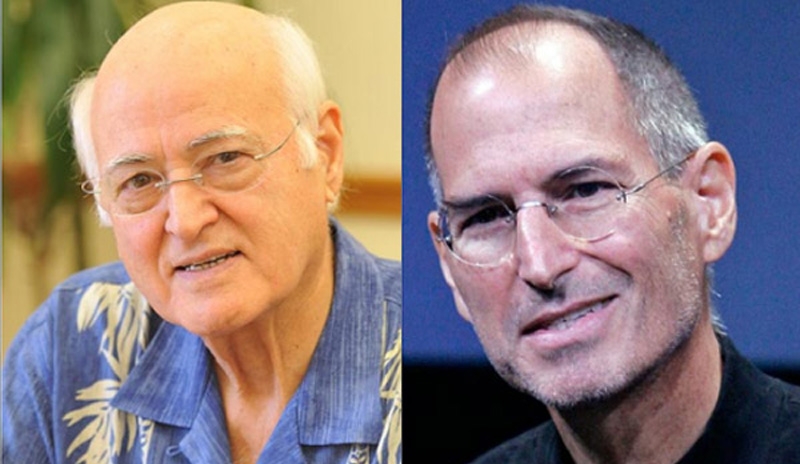 Steve Jobs is well known as an arch innovator from California’s Silicon Valley – founding Apple Computer, NeXt and Pixar, and helping to bring to the world the personal computer, Mac, iPhone and iPad, as well as movies such as Toy Story and Finding Nemo.

Less well known is the fact that while Steve Jobs was born in California he was actually adopted, and his biological father was a political migrant from the Syrian city of Homs, now devastated by the civil war in Syria.

On Twitter this fact has now gone viral, starting via a tweet by David Galbraith, and further exposed by the BBC World Service’s Outside Source programme. It remains a powerful statement, especially following the ISIS atrocities in Syria, Iraq, Egypt and now with Donald Trump’s indefinite ban of Syrian refugees.

While some people are horrified at the numbers fleeing Syria, and worry about the consequences of other countries taking on millions of refugees, many have pointed out that previous Syrian migrants have boosted the West’s culture, business and technology – most notably the biological father of Steve Jobs – Abdul Fattah Jandali, who is still alive (aged 85) and living in Nevada.

Jandali fled the Middle East because of protests and demonstrations that eventually toppled the president of Lebanon.

He is a non-practicing Muslim and hasn’t been on the Haj (the Islamic pilgrimage to Mecca), but he has stated that he believes in Islam in doctrine and culture.

“I have never experienced any problem or discrimination in the United States because of my religion or race. Other than my accent, which might sometimes suggest that I’m from another country, I have completely integrated in society here,” he is quoted as saying in a Lebanese news website.

Jandali was born in 1931 in Homs, Syria to a wealthy landowner. His father was a self-made millionaire who owned “several entire villages”, according to his son. He father held complete authority over his children.

His mother was a traditional Muslim woman who “took care of the house and me and my four sisters, but she was conservative, obedient, and a housewife”.

He had wanted to study law at Damascus University to become a lawyer, but his authoritarian father disagreed, saying that there were “too many lawyers in Syria”.

At 18 Jandali left Syria for Lebanon to continue his studies at the American University of Beirut. He described Beirut as the city “where I spent the best days of my life”.

At the university he was an activist for Arab nationalism, and demonstrated for the independence of Algeria and even spent three days in prison.

Protests from 1952-54 forced him to flee Beirut. The protests demanded the resignation of then Lebanese president, Bechara El Khoury, who later became the first Arab president to step down under the pressure of popular demonstrations in the streets.

Unlike many of the Syrian migrants now fleeing to Europe Jandali moved to New York, where he lived with a relative, Najm Eddin al-Rifai, who was the Syrian ambassador to the United Nations.

Jandali studied at Colombia University and Wisconsin University where he received a scholarship that enabled him to obtain a Ph.D. in Economics and Political Sciences.

While studying in Wisconsin Jandali met and dated a German-Swiss Catholic called Joanne Carol Schieble, who was soon pregnant with his child.

Her conservative Catholic father refused to allow her to marry Jandali because he was a Muslim.

Jandali then left Schieble not long before the baby’s birth on 24 February 1955.

The newborn boy was put up for adoption in San Francisco, with the stipulation that the adoptive parents be Catholic and college educated.

The first-choice parents (Catholic, educated and wealthy) suddenly decided they wanted a girl.

So it was that another couple, Paul and Clara Jobs, adopted the boy.

Luckily for us Paul Jobs passed on to Steve his love of mechanics, which led to Steve’s friendship with Steve Wozniak and the eventual founding of Apple Computer.

There is another refugee link in that Clara’s parents had landed in New Jersey after fleeing the Turks in Armenia.

“Knowing I was adopted may have made me feel more independent, but I have never felt abandoned,” said Steve Jobs.

“I’ve always felt special. My parents made me feel special.”

He hated it when anyone referred to Paul and Clara Jobs as his “adoptive” parents or implied that they were not his “real” parents: “They were my parents 1,000%,” he said.

Of his biological parents, Jandali and Schieble, he was dismissive: “They were my sperm and egg bank. That’s not harsh, it’s just the way it was, a sperm bank thing, nothing more.”

Not long after the adoption Jandali reunited with Schieble, and the couple were married. A year later they had a daughter, Mona – who went on to become a successful American novelist. Jobs didn’t meet the then Mona Simpson until he was 27 years old.

But Jandali was soon again on the move. Following financial problems he returned to Syria, hoping to land a job in the diplomatic corps.

But a life as a diplomat was not to be, and he instead worked for a year as a director in an oil refinery back in Homs. While in Syria he divorced Schieble.
In 1962, Jandali returned to the US, but did not contact Joanne, who had remarried an American.

Jandali worked as an assistant professor at Michigan University and later Nevada University. Later he bought a restaurant and then worked in Las Vegas. At age 84 he remains the Vice Chairman of the Boomtown Casino and Hotel in Reno, Nevada.

Did Steve Jobs ever meet his biological father?

Steve Jobs believed that he unknowingly met his biological father when Jandali was manager of a restaurant in Sacramento.

“I was in the restaurant once or twice, and I remember meeting the owner who was from Syria. And it was most certainly [my father]. I shook his hand and he shook my hand. And that’s all,” Jobs told his official biographer Walter Isaacson.

Later his sister Mona revealed that Jandali was the owner of that restaurant.

Jobs also told Isaacson that he decided not to pursue a relationship with Jandali: “I learned a little bit about him and I didn’t like what I learned”.

Before Steve’s death Jandali explained that he had no contact with his son, but believed him to be a genius.

“I don’t have a close relationship with him. I send him a message on his birthday, but neither of us has made overtures to come closer to the other. I tend to think that if he wants to spend time with me he knows where I am and how to get hold of me.”

Jandali rejects the term “Father of Invention,” which some have tried to foster on him.

“My daughter Mona is a famous writer, and my biological son is Steve Jobs, the chief executive of Apple. The reason he was put up for adoption was because my girlfriend’s father was extremely conservative and wouldn’t let her marry me, and she decided to give him up for adoption.

“Steve is my biological son, but I didn’t bring him up, and he has a family that adopted him. So if it’s said that I’m the ‘father of invention’, then that’s because my biological son is a genius and my daughter a brilliant writer. I thank God for my success in life, but I’m no inventor.

“I think that if my son Steve had been brought up with a Syrian name he would have achieved the same success. He has a brilliant mind. And he didn’t finish his university studies. That’s why I think he would have succeeded whatever his background.”

Banksy artwork in Calais depicts Steve Jobs as a migrant

Well known Grafitti artist Banksy created artwork in the ‘Jungle’ refugee camp in Calais depicting the late Steve Jobs, founder of Apple, as a migrant. Jobs, the son of a Syrian migrant, can be seen carrying an old Apple Mac computer, along with a black bag of possessions thrown over his shoulder, much like the occupants of the camp would have.

The art draws direct comparisons between Steve Jobs father, who was a migrant from Syria, and the current situation in Europe (and the US). The artwork is supposed to draw attention to the benefits of migration, Banksy has since said. Considering Jobs’ helped to shape the world as we know it today with the introduction of the iPhone, we can’t help but wonder how different things would’ve been without him…