The first match kicks off tonight (18 September) at 8pm: it’s England, the co-hosts, against Fiji. You can watch it on ITV (or ITV1, as the network tended to call it in the past – although that seems to have stopped now). The remaining games are all on either ITV or ITV4; the Radio Times has the full schedule of matches. Both channels, fortunately, can be streamed live on ITV’s ITV Player app for iPad and iPhone, and you can rematch broadcast games afterwards too. 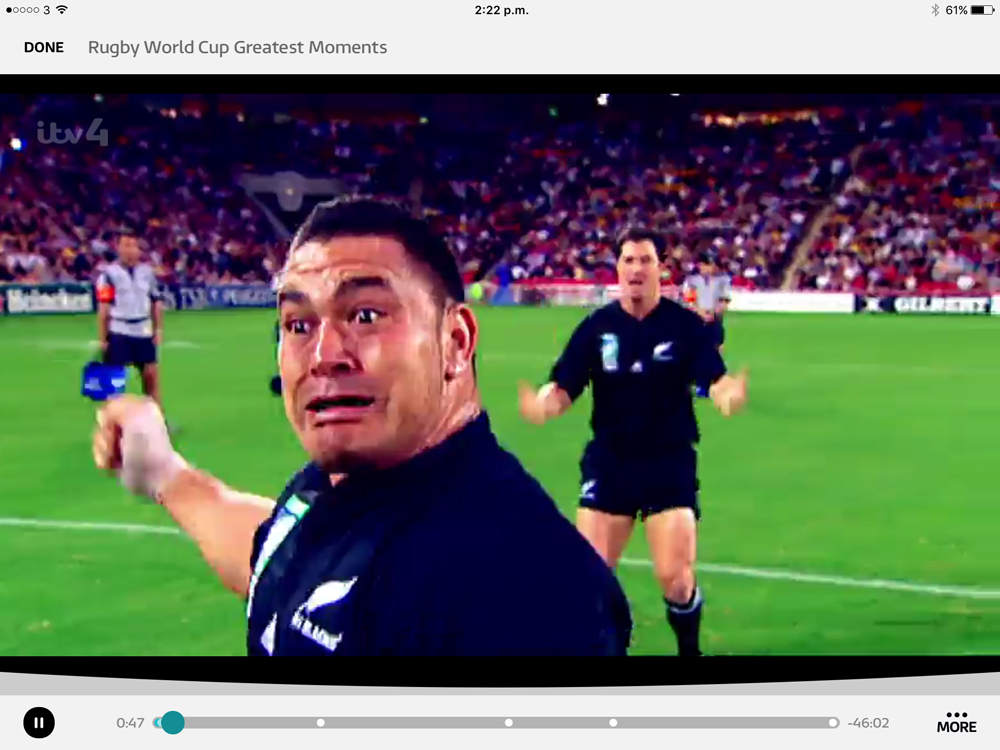 How to watch Rugby World Cup 2015 on iPad or iPhone: ITV Player

It’s easy (and free) to watch any or all of the matches in the Rugby World Cup on your iPad using ITV’s (free) ITV Player app. Like the BBC’s iPlayer app, this offers both live streaming of TV programmes currently playing on one of ITV’s channels, or the ability to watch or rewatch programmes from the past few weeks.

Download the app and open it. You can navigate around the app – it’s short on future programming information, you’ll note, which is why the Radio Times schedule linked above is so useful here – but if you want to actually watch anything it’s necessary to register for an account. The player will require your postcode, email address and date of birth among a few other fairly standard details, but you don’t need to enter any payment details. If your date of birth is too recent (fun fact: due to a slight miscalculation in the interface, it actually seems to be possible to enter birth dates in the future) then you may be forbidden from watching the programmes you’re keen on, so bear that in mind. 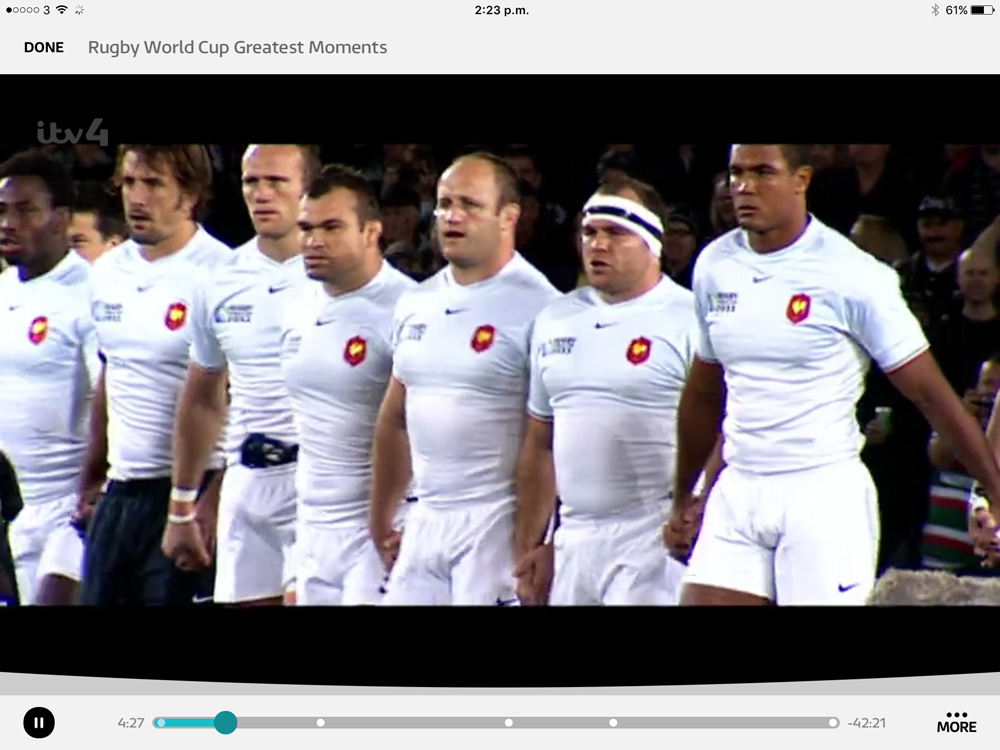 If the rugby match you want to watch is on right now, swipe left and right until you get to the correct channel tab – either ITV or ITV4. Tap the turquoise play icon over the splash image at the top of the screen and it’ll start live-streaming whatever’s on right now.

You can also watch previously broadcast games. Have a quick check to see if the game you want is listed under the ‘Recently on ITV’ list below the main image; if so, you can tap this and start it playing normally. Otherwise you can use the search tool at the top of the interface. 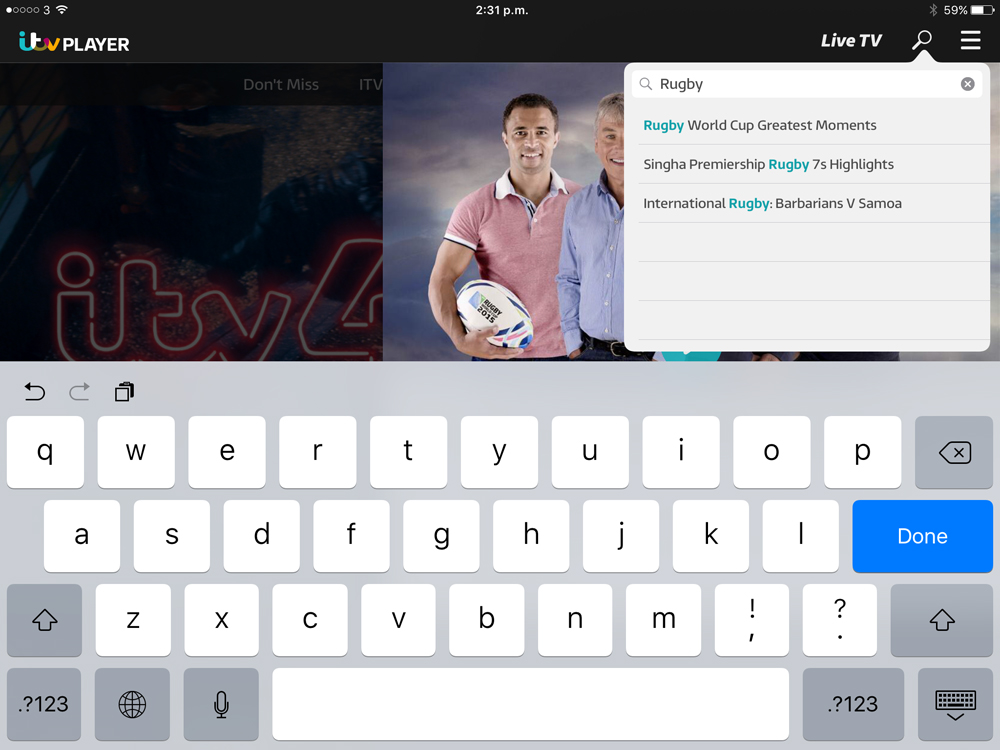 There will probably be an advert or two at the start of the stream, and potentially several more at marked points during the programme: that’s how ITV funds its programming. You can subscribe in order to remove the adverts.

The ITV Player app will see you through the tournament, but sports fans in the office recommend downloading the (also free) ITV Sport as a companion app. (In fact, this appears to to have been temporarily rebranded as ITV Rugby World Cup 2015; but searching for either name on the App Store brings up the app you want.)

Like the broader ITV Player app, the ITV Rugby World Cup 2015 app shows live rugby matches, but since this is all it shows, they’re a bit easier to find. It also has news articles, a schedule of matches and a heavily branded but still quite fun goal-kicking game. 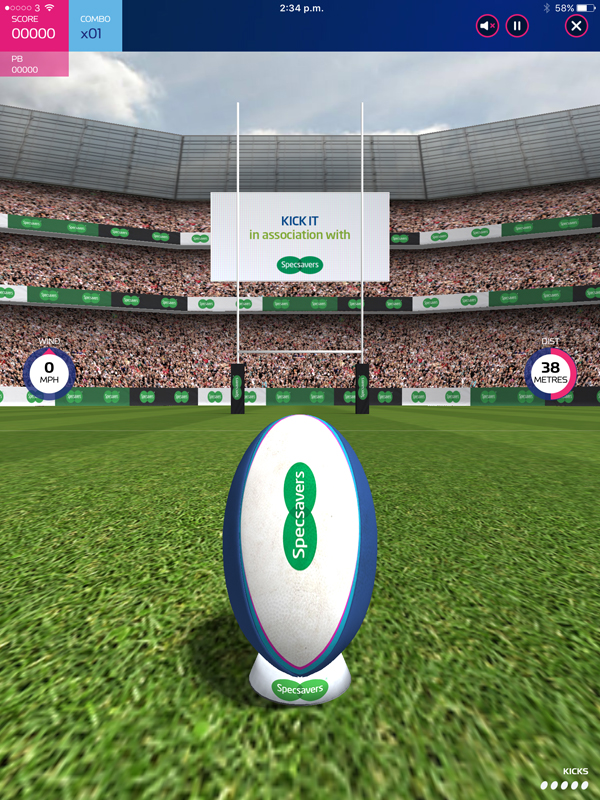 How to watch Rugby World Cup 2015: Other digital options

Here at Macworld we tend to prefer the iPhone or (better still) the iPad for watch sports events when we can’t reach a TV, but there are plenty of other options. You can watch Rugby World Cup 2015 live on in the internet, and if you’re trying to watch the TV coverage abroad you may find that a VPN service helps you get around the geo-restrictions.

Our colleagues on PC Advisor have plenty of guidance on the various ways you can watch the Rugby World Cup 2015.

and don’t forget festival season: How to watch Glastonbury 2016 on iPad or iPhone