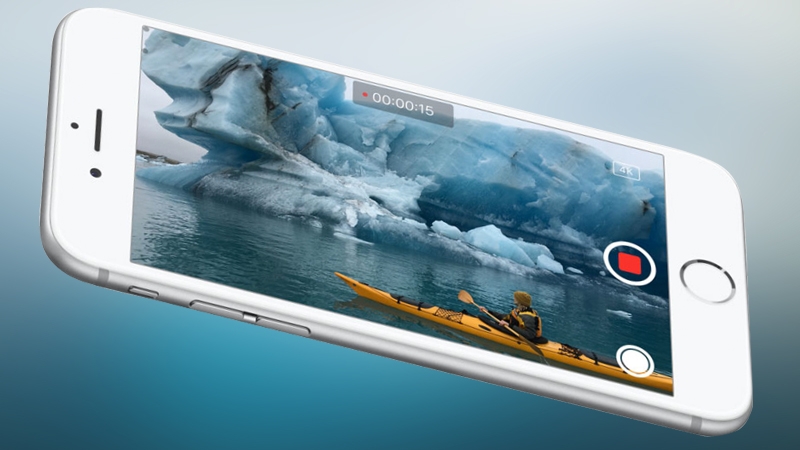 The iPhone 6s and iPhone 6s Plus were welcomed by cheers from the audience at Apple’s busier-than-usual September event, where they also announced an iPad Pro, the iPad mini 4 and a brand new Apple TV. The iPhone 6s boasted interesting new features including 3D Touch and an all improved camera with the first bump in its megapixel count since the iPhone 4s was announced back in 2011. The new sensor meant that the iPhone 6s and iPhone 6s Plus were able to record in 4K at 30fps – but what is the difference between 1080p and 4K? Here, we outline the differences between the two, how to switch between them on your iPhone and the best conditions for recording in each resolution.

So, what exactly is 4K video, and why is it different to 1080p HD video? In its simplest form, true 4K video is around four times larger than standard 1080p HD video, with a native resolution of 4096×2160 compared to 1920×1080. With regards to 4K video recording on the iPhone 6s and 6s Plus, 4K video isn’t quite native 4K – it’s classed as ‘Ultra High Definition’ much like our ‘4K UHD’ TVs, as it has a slightly lower resolution of 3840×2160, although with this being said there isn’t any difference to the naked eye.

So what’s the difference between the two formats on the new iPhone 6s, and iPhone 6s Plus? First of all, lets talk about frame rate – when recording in 1080p, you’re able to record at 60 frames per second whereas if you choose to record in 4K, you’ve got no choice but to record at 30fps.

While recording at 1080p @ 60fps means you’ll have a slightly larger file than if you recorded at 1080p @ 30fps, the difference in frame rate can really have an affect on the perceived quality of the video. 60 fps video is a lot smoother than the standard 30fps video, and is most noticeable when recording something fast, like a car – instead of jittering from one edge of the video to another like it would at 30fps, you’d see it glide across the screen. While 30fps is nothing to sniff at, we feel that 4K video should be shot at 60 frames per second minimum to provide the desired effect of ultra high definition video.

Also, with regards to the iPhone, we think 4K video should only be used if you intend to create a 4K video to be played on a UHD TV, YouTube, etc. Why? As neither the iPhone 6s or 6s Plus features a 4K display, you’ll never be able to fully appreciate the detail of 4K video playing directly from your iPhone. Yes, you may notice a slight bump in detail, but with a much larger file size when compared to a 1080p @ 60fps video (see below for more info), we’re not sure it’s worth it.

See also: iPhone 6 Plus vs iPhone 6s Plus

So, when do you use 1080p and when do you use 4K? Ultimately, it’s down to your personal preference and, to some extent, the amount of storage your iPhone has. Earlier we discussed frame rate, and how you can record at a higher frame rate at 1080p than at 4K, which is an important factor to consider when deciding which format to use. Ideally, to get the best possible video quality from 4K @ 30fps, your subject/location should be well lit, feature a lot of detail and slow/no movement. Take a look at the 4K video sample from Apple’s website – its very slow moving with very little motion from the camera itself, but captures an insane amount of detail on the icebergs and the surface of the water.

On the flip side, if you want to record something fast-paced like a race or a dance routine, your best bet is to use 1080p at 60fps. The higher frame rate will provide a much smoother video, allowing you to see more of what is being recorded and, as mentioned earlier, will provide the illusion of a higher quality, professional video. 1080p is also advised for low light conditions, as recording at 4K has more pixels and in turn, smaller diodes (which effects low-light performance).

File size is an important thing to consider when deciding whether to shoot at 1080p or 4K, as three minutes of 4K video could take up more than 1GB. Let’s compare sizes of one minute videos Y(on average):

If you want to record a short video of, lets say, your surroundings on holiday, 4K may be a good choice – it’s going to be detailed, and as long as you pan around slowly, it’ll look pretty smooth. However, if you want to record something longer (1+ minutes) then you may want to opt for 1080p, especially for those of you that have a 16GB iPhone.

So, how can you change between the 1080p and 4K video resolutions on the iPhone 6s, and iPhone 6s Plus? Unfortunately, users aren’t able to switch between the two resolutions directly from the Camera app (which we can’t really understand). Instead, you have to do the following:

Other iPhone 6s and 6s Plus video features

Apart from 1080p @ 60fps an 4K @ 30fps video, what else can the iPhone 6s and 6s Plus do in terms of video recording capabilities? The first feature is for iPhone 6s Plus users only, as the iPhone 6s Plus uses Optical Image Stabilisation for video recording for the first time, which should provide users with incredibly smooth and stabilised video. Fans may be keen to point out that the iPhone 6 Plus also had Optical Image Stabilisation, but it was limited to photos only.

iPhone 6s users shouldn’t feel too disheartened though, as it (along with the 6s Plus) features what Apple calls ‘cinematic video stabilisation’ which looks to bring professional-grade stabilisation to your videos. The end result should make your handheld videos look smoother, with no sudden jolts or camera turns, producing an all round better quality video. YYou’ll be happy to know that its not just standard videos that get stabilised – time lapse videos recorded on both the iPhone 6s and 6s Plus feature image stabilisation, which should provide a smooth time lapse even when walking.

But what about those times where you’re recording a video, and want to take a photo at the same time? The good news is that with the iPhone 6s and 6s Plus, you’re able to take full 8Mp still images while recording video in 4K. This feature is also available on older iPhones, but the saved images are smaller than 8Mp. For those that like to get creative with their videos, you’re able to record 120fps slow-mo video at 1080p, or 240fps at 720p on the iPhone 6s and 6s Plus when using the rear-facing iSight camera. This can then be edited and exported directly from your iPhone, with no additional software needed.