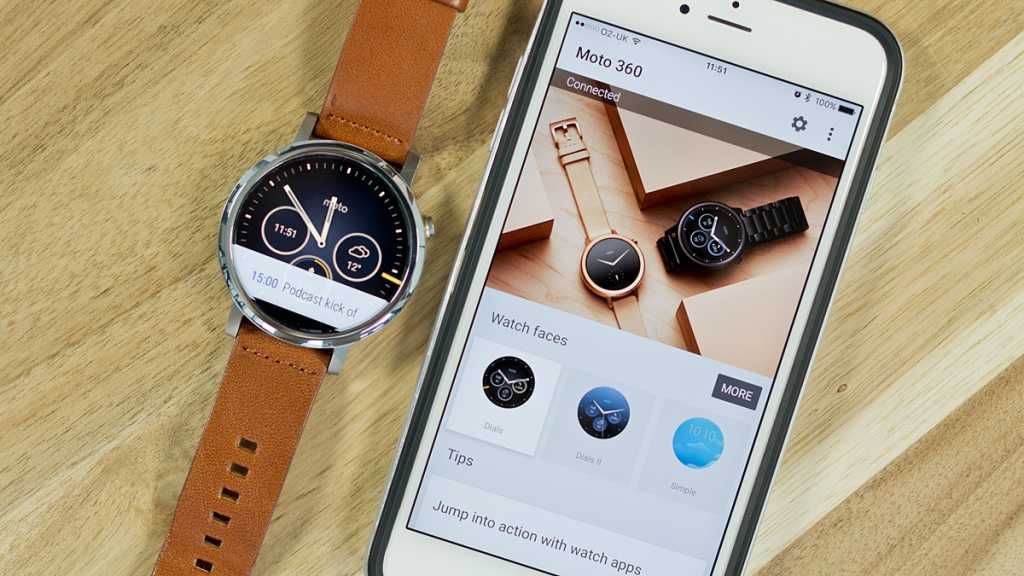 How do I set up and use an Android Wear smartwatch with my iPhone?

How to use Android Wear with iPhone: Setup

To start off, you’ll need an iPhone 5 or newer that’s running on iOS 8.2 or later in order for it to be compatible with your Android Wear device. (Read next: How to update to iOS 9 / iOS 8 vs iOS 9 comparison review.)

Once you’ve got your hardware ready, it’s time to switch it all on and start working your magic on the software. In order to synchronise your iPhone with your Android Wear watch you will need to download the Android Wear app through the App Store. Once it’s installed, open the app and start setting up your watch; in our case we had the Moto 360 2 that’s running on Android 5.1.1. The installation couldn’t be any simpler and is very straightforward. 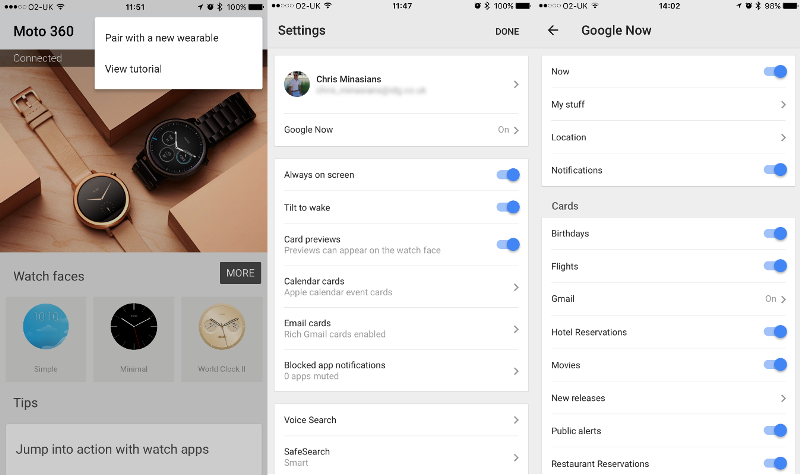 That’s it – you’re good to go. For additional settings and configurations, go into the app on your iPhone, tap the small cog and edit the settings you wish to change. You’ll also be able to change the watch’s interface seamlessly via your iPhone.

Now that you’ve installed, synchronised and setup your Android Wear device with your iPhone, you might be wondering if you’re going to face any problems getting the two platforms (Android Wear and iOS) to pay nicely together. What are the limitations of this combination?

If you’re looking for a feature-rich list by Google, look away now. Unfortunately, due to Apple’s ecosystem and third-party hardware policy the Android Wear integration with your iPhone isn’t the same as an Apple Watch, nor an Android Wear device with an Android phone. In other words, the normal Android Wear app extensions you would find on Android aren’t present on the iPhone.

However this is set to improve after Google’s announcement of Android Wear 2.0 on 8 February 2017. Many Android Wear watches will get the update to the new OS soon, and with it will come extensive third party app support for iPhone. We’ll bring a full tutorial soon. 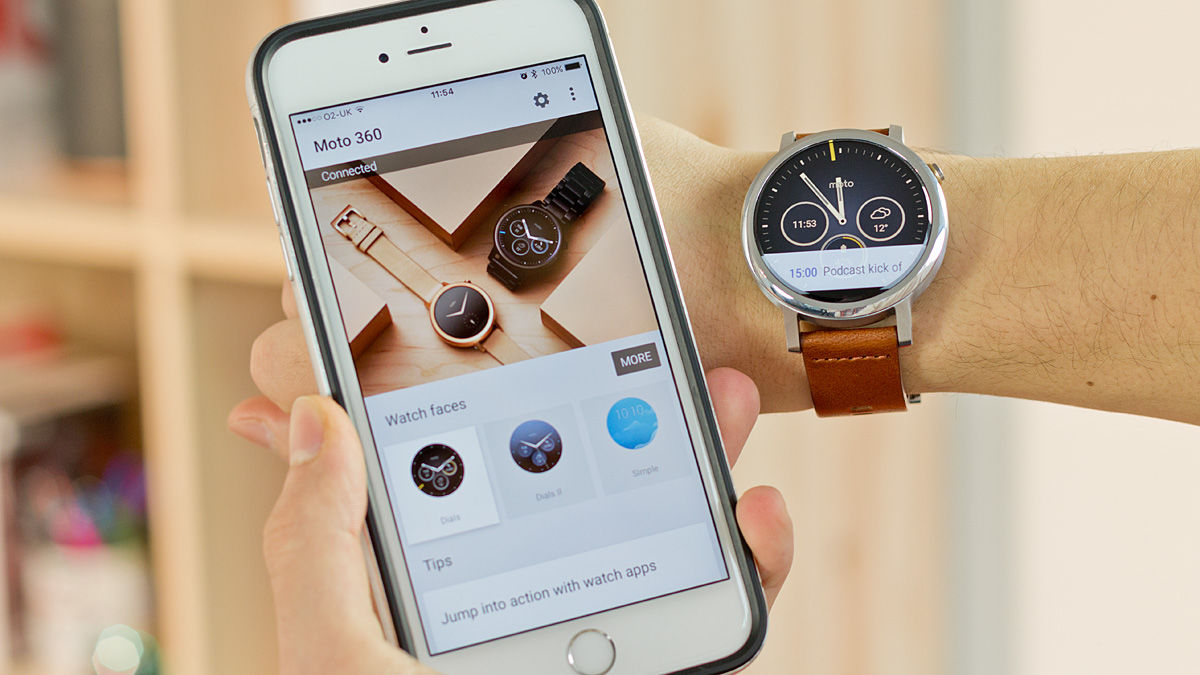 The biggest drawback for Android Wear users on iPhones is the lack of ability to reply to messages straight from your watch. Instead, your Android Wear will make you aware of new notifications that have appeared on your phone, which can be handy if you like leaving your phone in your pocket, but utterly pointless if you want to action those notifications. Read next: Smartwatch round-up.

It’s understandable that not all iOS apps will work on Android Wear, but even the major ones such as WhatsApp, Facebook and even Apple Maps have very limited functionality. This also stretches to basic phone calls, where you’ll be able to answer or reject a call, but have to speak to the caller via your iPhone, leaving the feature a little redundant.

The limitations don’t stop there. Unlike when using an Apple Watch with an iPhone, you won’t be able to synchronise any data with the Health app, nor any in-built iOS apps. It should be said that some Android Wear watches have their own in-built Health apps, which will provide you with basic information (such as a step counter). 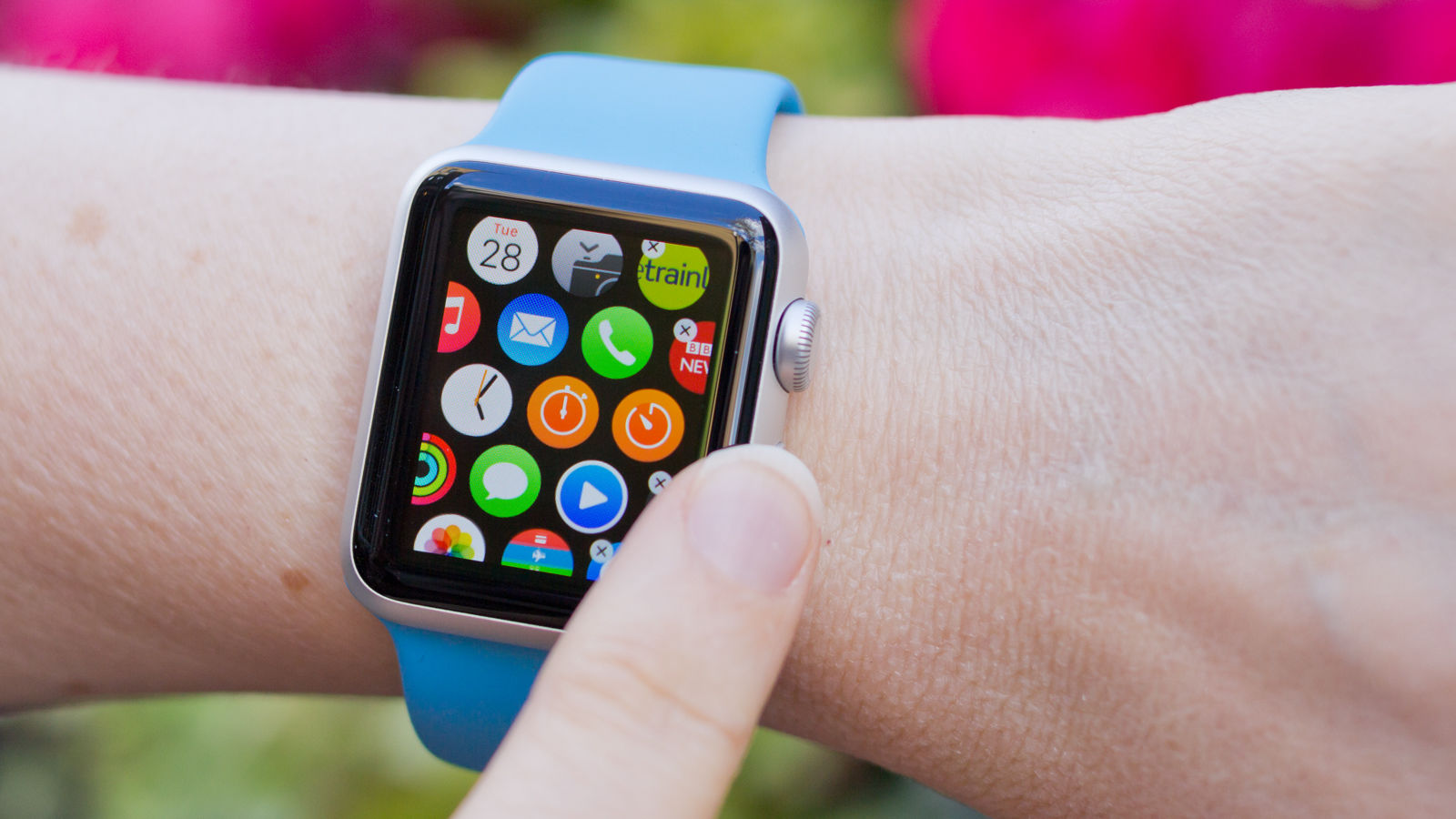 Finally, unlike the Apple Watch, you will not be able to see the battery level of your Android Wear watch through the notification panel of your iPhone. 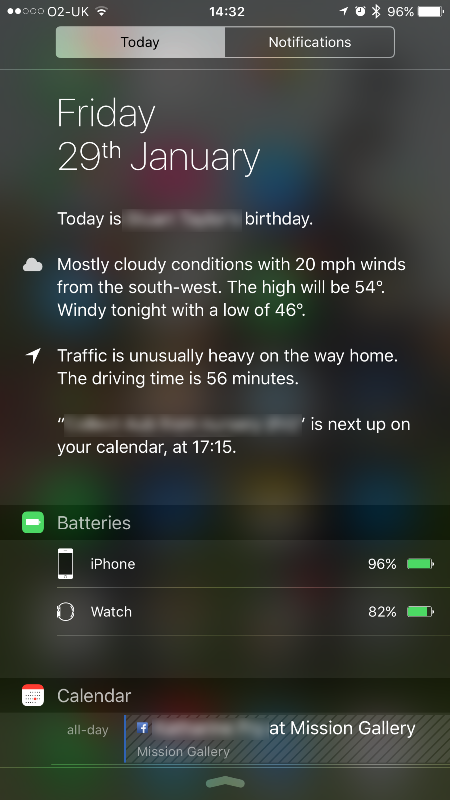 This might all seem very negative; however, the fact that you can use an Android watch with your iPhone is a huge plus, especially as you cannot use your Apple Watch with an Android device!

Despite its many limitations, there are various benefits of using your Android Wear with the iPhone. The biggest one being: you don’t have to buy an Apple Watch if you’ve already got an Android Wear watch. Even with its limitations, it still makes use of the piece of hardware you have and allows you to use it.

There is one massive benefit that some Android Wear watches have over the Apple Watch. That’s the built-in GPS functionality on the Sony SmartWatch 3 and Moto 360 Sport, which make them both better alternatives than the Apple Watch, not only due to their cheaper price, but due to their increased tracking capabilities for fitness lovers. The in-built GPS allows runners to more accurately track their progress, whereas with the Apple Watch, many gym-goers tend to buy an alternative wristband to provide them with better workout data. 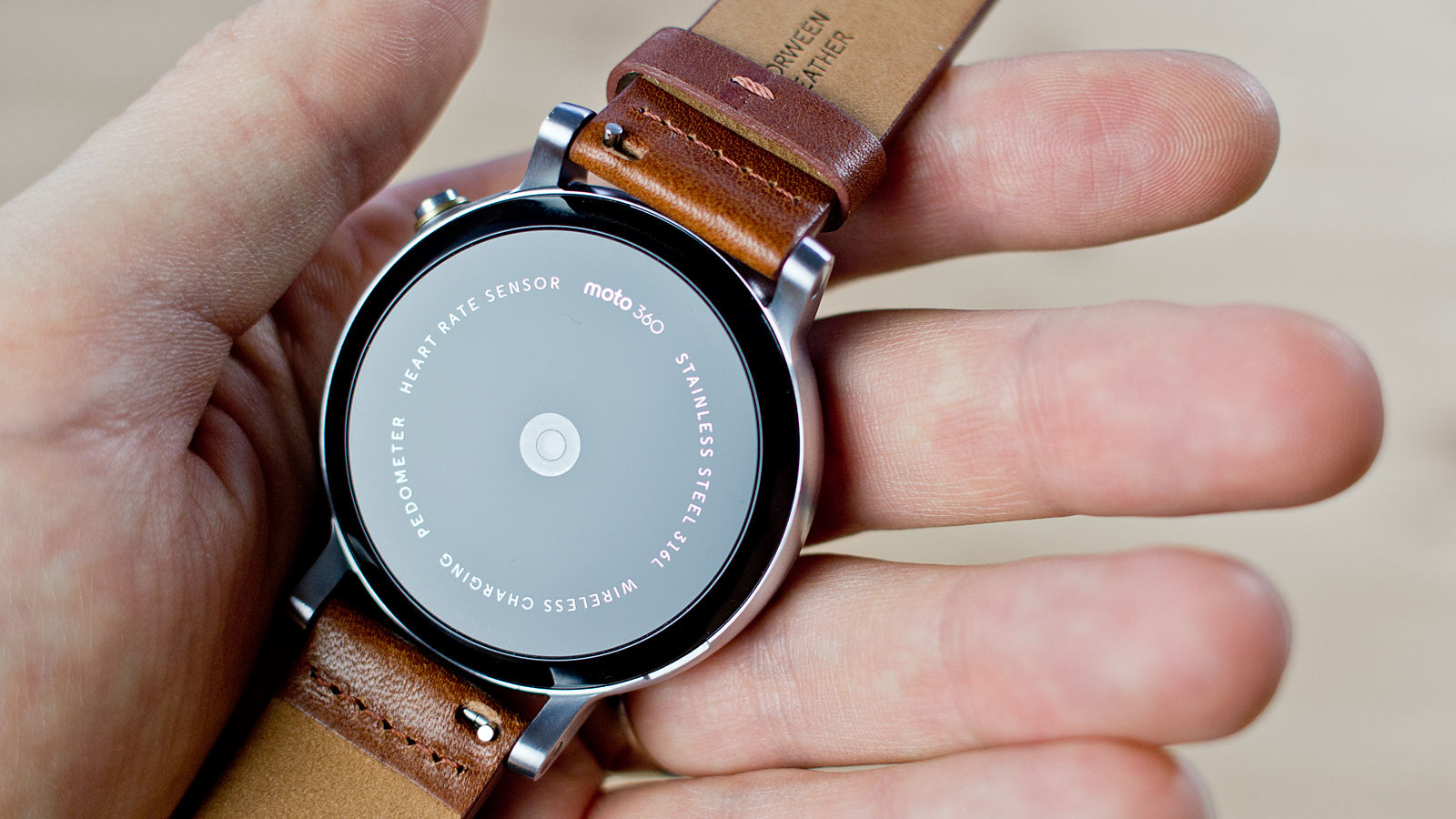 Another – but potentially less obvious – benefit for iPhone users is the ability to select from a large selection of different smartwatches. This includes different brands which all have their unique look, be it from LG Watch R to the Microsoft Band. The amount of extra choices you have with Android Wear far surpasses the amount of different wristbands you can get for your Apple Watch. In essence, with greater choice you can choose the watch that suits you best.

For music lovers, you’ll be able to play/pause, skip/previous and even increase/decrease volume of your iPhone, just make sure you swipe to the side to reveal the extra music controls. In terms of its compatibility you’ll be able to use it with Apple Music, Spotify and certain apps like YouTube, which make it a great addition.

Finally, you will be able to perform certain basic tasks on your Android Wear watch via Google’s own iOS apps. These are very few and far between, but the Gmail app allows you to utilise its ‘Rich Gmail cards’ to reply or achieve emails straight from your watch. Do bear in mind that your email replies will be done by voice on your Android Wear watch and once Google has picked up your voice, it will send the message immediately, so make sure you speak clearly to your watch! 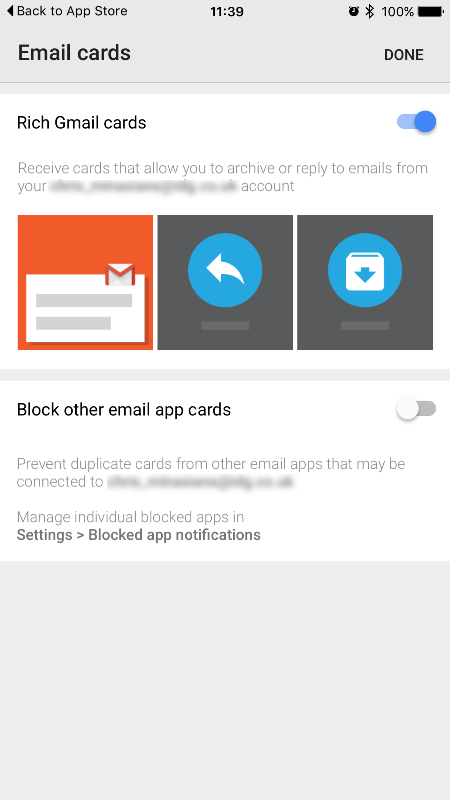 How to use Android Wear with iPhone: What does the future hold?

There’s a lot of potential for Android Wear to expand its wings. Most of the functionalities that can be added would depend on how Google and Apple choose to play their cards (pun intended).

Might we potentially see the Apple Watch working on an Android device? Or will we see Apple open the doors to Google’s Android Wear watches? We’re not sure what the future will hold, but for the time being you can use the basic functionalities of your Android Wear watch on an iPhone.

How to reset, factory reset, restore or restart an iPhone

How to fix a broken iPhone Home button

How to get Flash on an iPhone or iPad