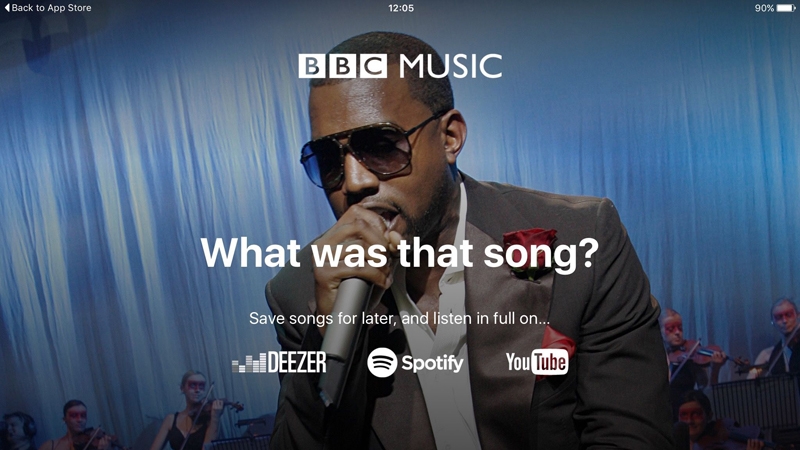 Welcome to our complete guide to the new BBC Music app for iPad and iPhone. In this tutorial we explain how to explore the BBC music archive, find great songs and live performances from recent broadcasts, and create exportable playlists of your favourite tunes to stream in full on YouTube, Spotify or Deezer.

The BBC iPlayer and iPlayer Radio are essential apps for many people and, of course, these two apps include a vast amount of music, along with all the BBC’s drama, news and bake-off contests.

In fact, there’s so much music broadcast on the BBC that it can often be difficult to locate specific songs or tracks that you want to hear again. You could, for instance, use iPlayer Radio to play all three hours of last night’s Steve Lamacq show on 6 Music – but suppose all you want to do is just go back and have another listen to Gamma Knife by King Gizzard And The Lizard Wizard? 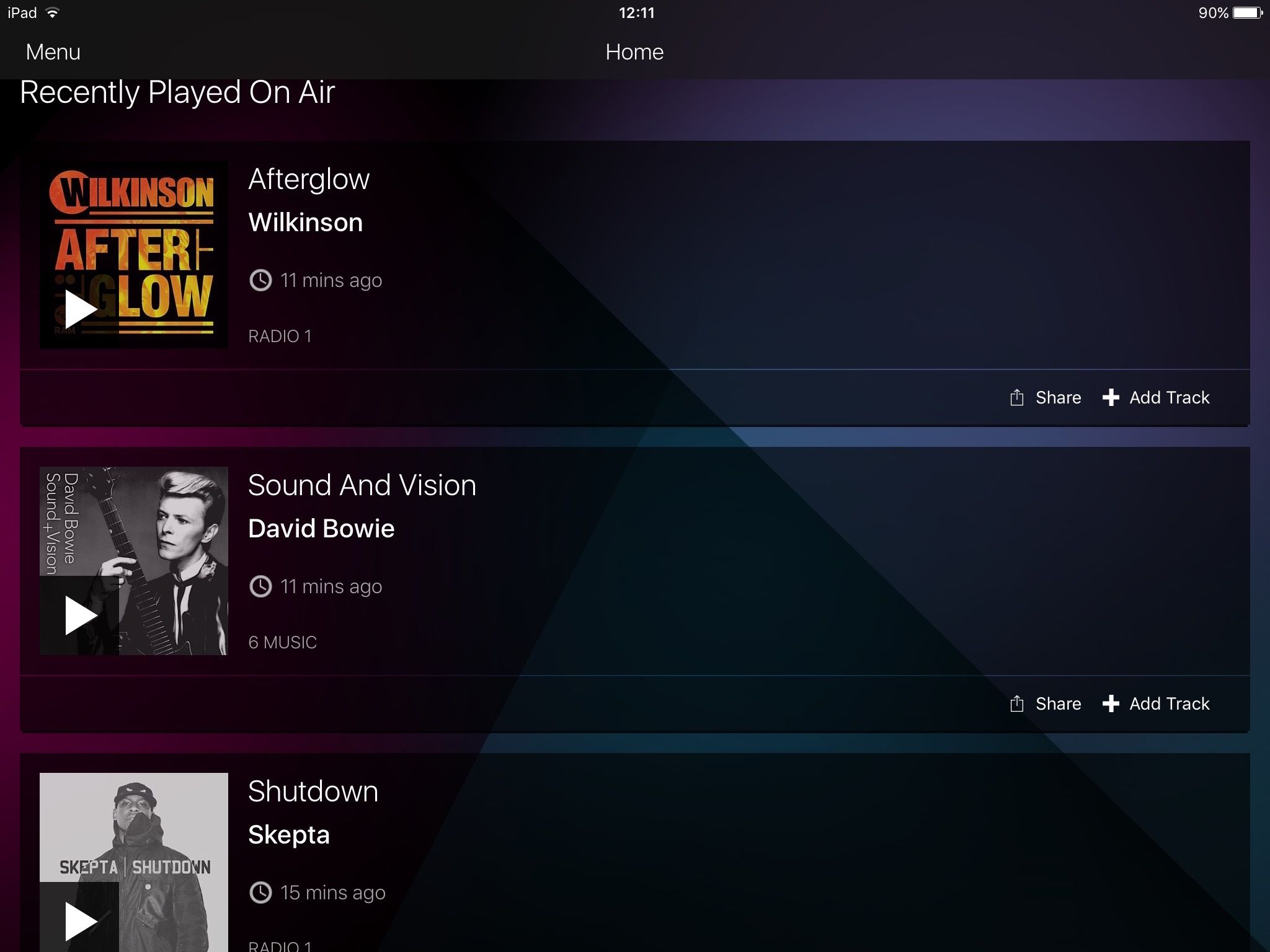 That’s where the new BBC Music app comes in.

It doesn’t attempt to compete with the vast music libraries available on services such as Spotify or Apple Music, but you can use it as a kind of musical search engine to find specific songs and tracks that have recently been played on the BBC’s many radio stations and TV channels. It’s really handy if you want to find that song you heard on the radio the other day.

But, like all version 1.0 apps, BBC Music is still a bit rough around the edges, so here’s our guide to finding the best music and video clips from good old Auntie Beeb.

How to use the BBC Music app: Set up BBC Music

The BBC Music app can look a bit untidy at times, but it has two main functions that we need to focus on. It allows you to locate any tracks played on the various BBC radio stations in the last seven days, as well as live sessions, gigs and other performances that are broadcast on either radio or BBC TV channels.

The app is free to download but you’ll need to set up a BBC ID account, so that the app can store your music preferences and share them with other apps such as the BBC iPlayer. It’s also possible to share information with music apps such as Spotify – although it will ask your permission before doing so. 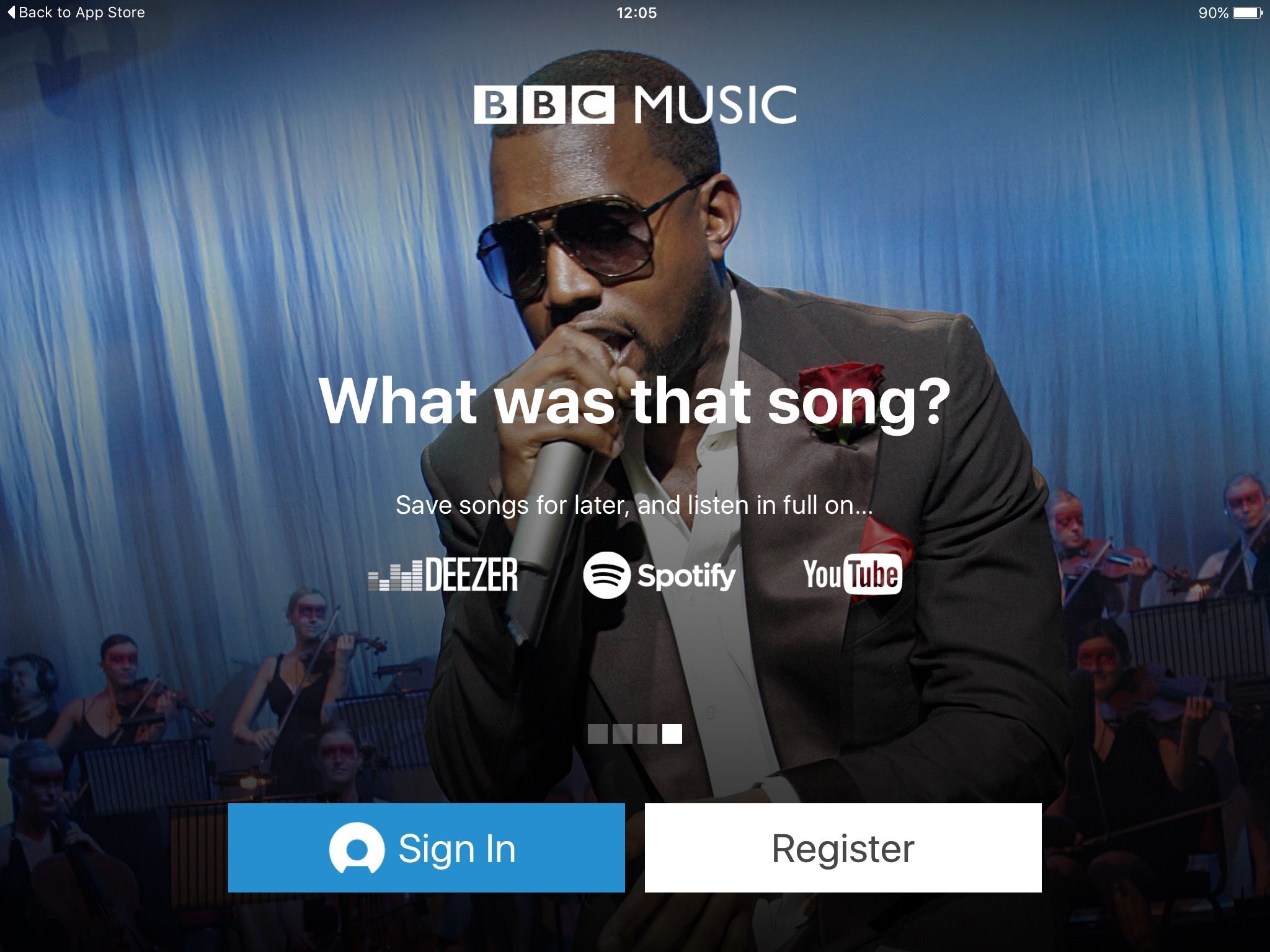 Once you’ve set up your account the app will ask you what sorts of music you like, and which of its radio stations you prefer, and will then display its main Home page with a set of recommendations based on your personal music preferences.

These recommendations include individual tracks that have been played on BBC radio stations in the last seven days, as well as video clips from TV programmes, and some full-length radio programmes, such as the recent Janet Jackson retrospective on Radio 1XTra.

How to use the BBC Music app: Create and export playlists 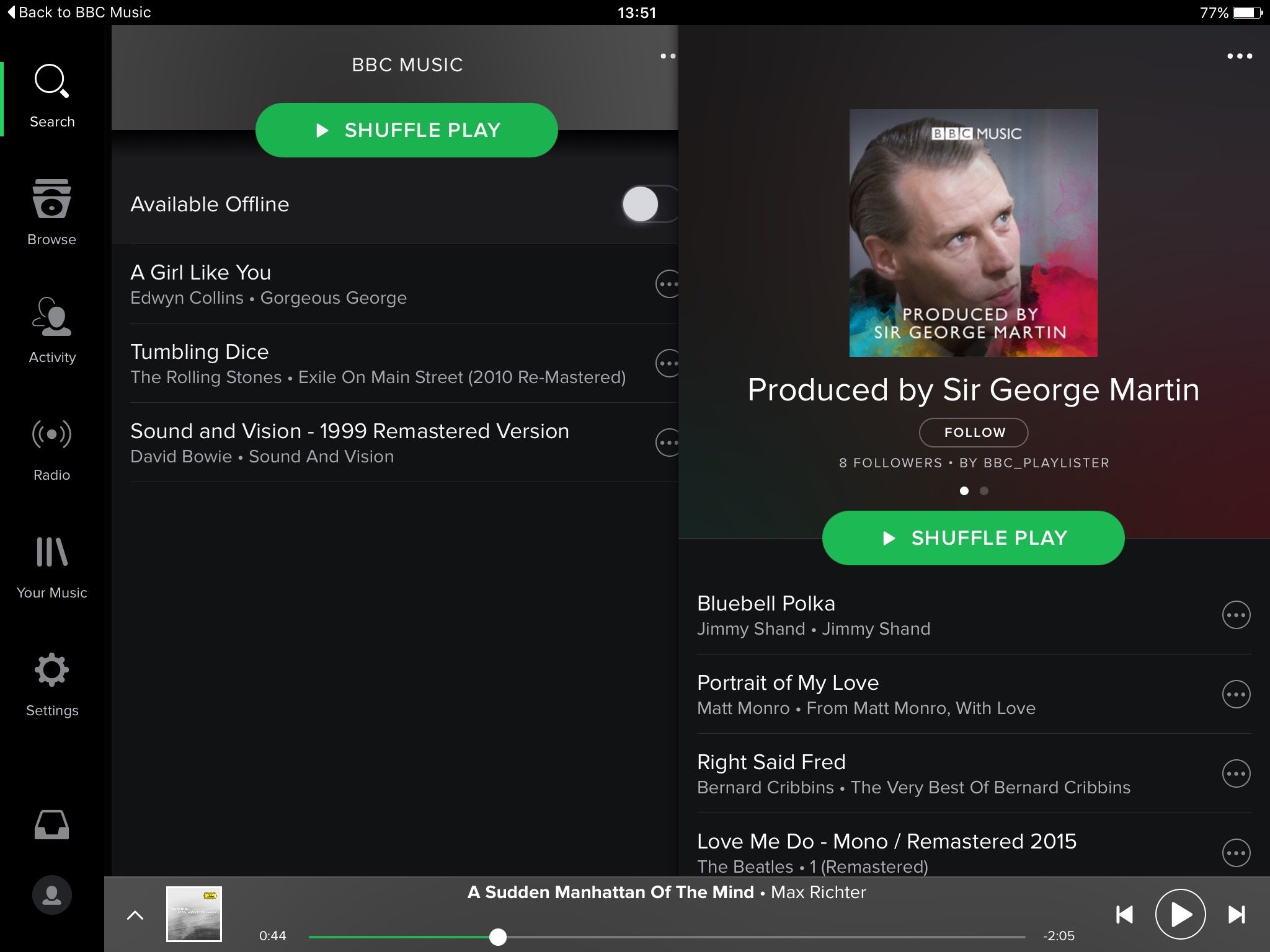 Unfortunately, licensing restrictions mean that commercial recordings – which mostly means singles and album tracks played on the radio – are limited to just 30-second previews. That’s still handy, though, as it will help you to identify tracks and tell you when they were first broadcast.

If you want to hear the track in full you can tap the ‘Add’ button to create a playlist – called My Tracks – containing tracks that you want to listen to later. Then you can tap the Menu button at the top of the screen to see the other main options that are available within the app, which are called Audio And Video, BBC Playlists and Tracks. 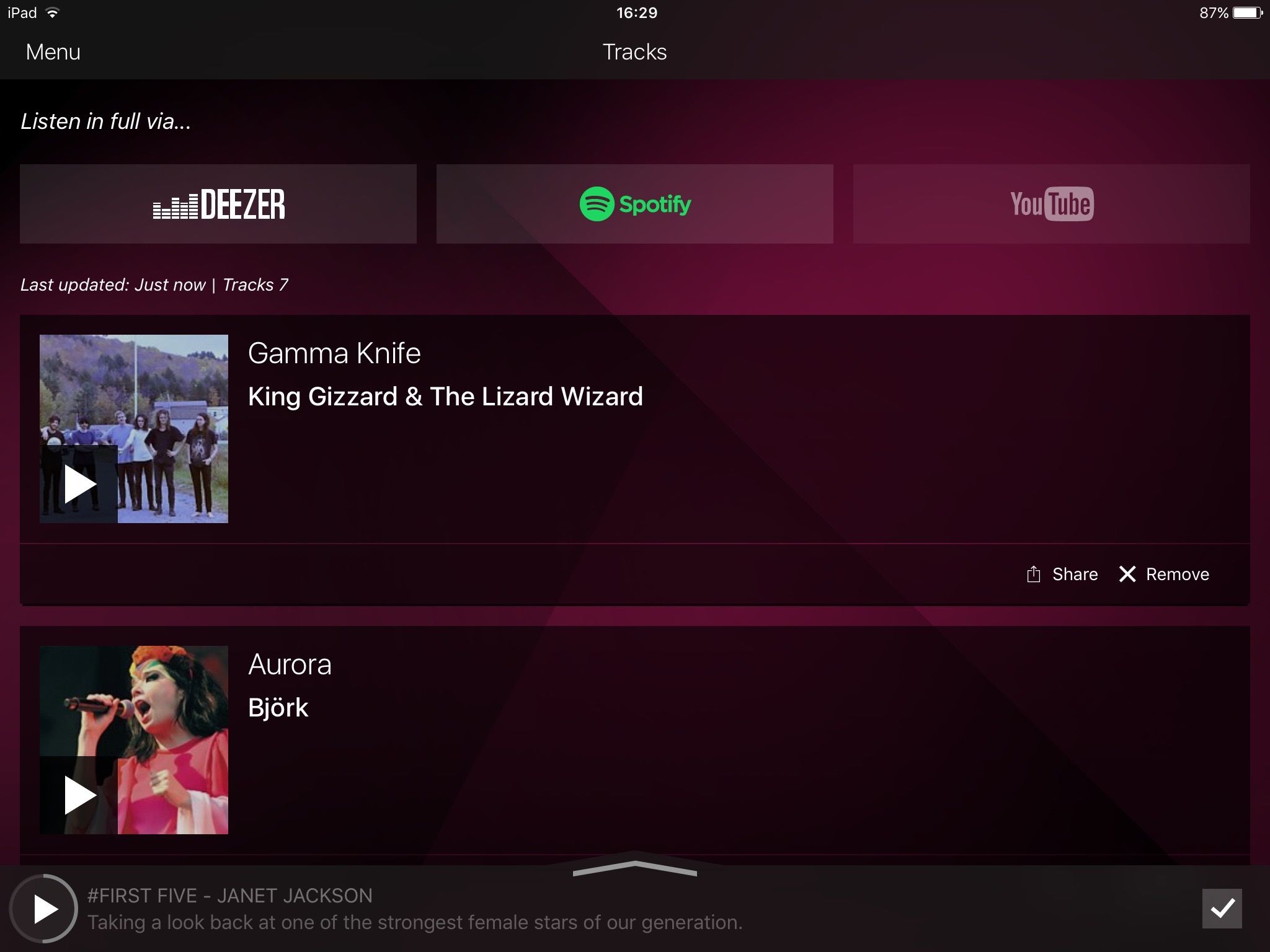 Tap The Tracks button and you’ll see the My Tracks playlist, which contains King Gizzard and any other tracks that you’ve added. These are still just 30-second previews, but at the top of this list there’s an option labelled Listen In Full, which enables you to export your playlist to Spotify, YouTube or Deezer, and locate full-length versions of all your songs that you can listen to whenever you want.

As yet there’s no option to link up with iTunes so you can buy tracks in the iTunes Store or listen to them on Apple Music, but the BBC says that it is in talks with Apple and hopes to add an iTunes option soon.

Read next: Apple Music vs Spotify

How to use the BBC Music app: Browsing the BBC

If you just want to browse around a bit you can tap the BBC Playlists button, which displays a long list of playlists that have been compiled by the DJs at the BBC. These playlists generally follow themes such as Christmas songs or Great Guitar Riffs, as well as marking special occasions such as the BBC Proms or the recent deaths of David Bowie and George Martin.

Many of the songs on these playlists will still have that 30-second restriction, but again you can use the Add button to save them for later and find the full-length versions of the tracks on Spotify, YouTube and Deezer.

How to use the BBC Music app: Search for tracks recently played on BBC radio

Another useful option here is Find A Track, which allows you see what tracks were played on any BBC radio station at any time in the last week.

Unfortunately the search option here is rather limited, as you have to specify the radio station that played the track, as well as the day you heard it and the rough time. That can be handy if you heard something catchy on Radio 1 (well, it does happen occasionally), as you stumbled out of bed at 7.30 yesterday morning. But, annoyingly, it doesn’t allow you to perform a more general search for terms such as “Björk Violently Happy” – which is kind of daft, really.

How to use the BBC Music app: Explore archive material 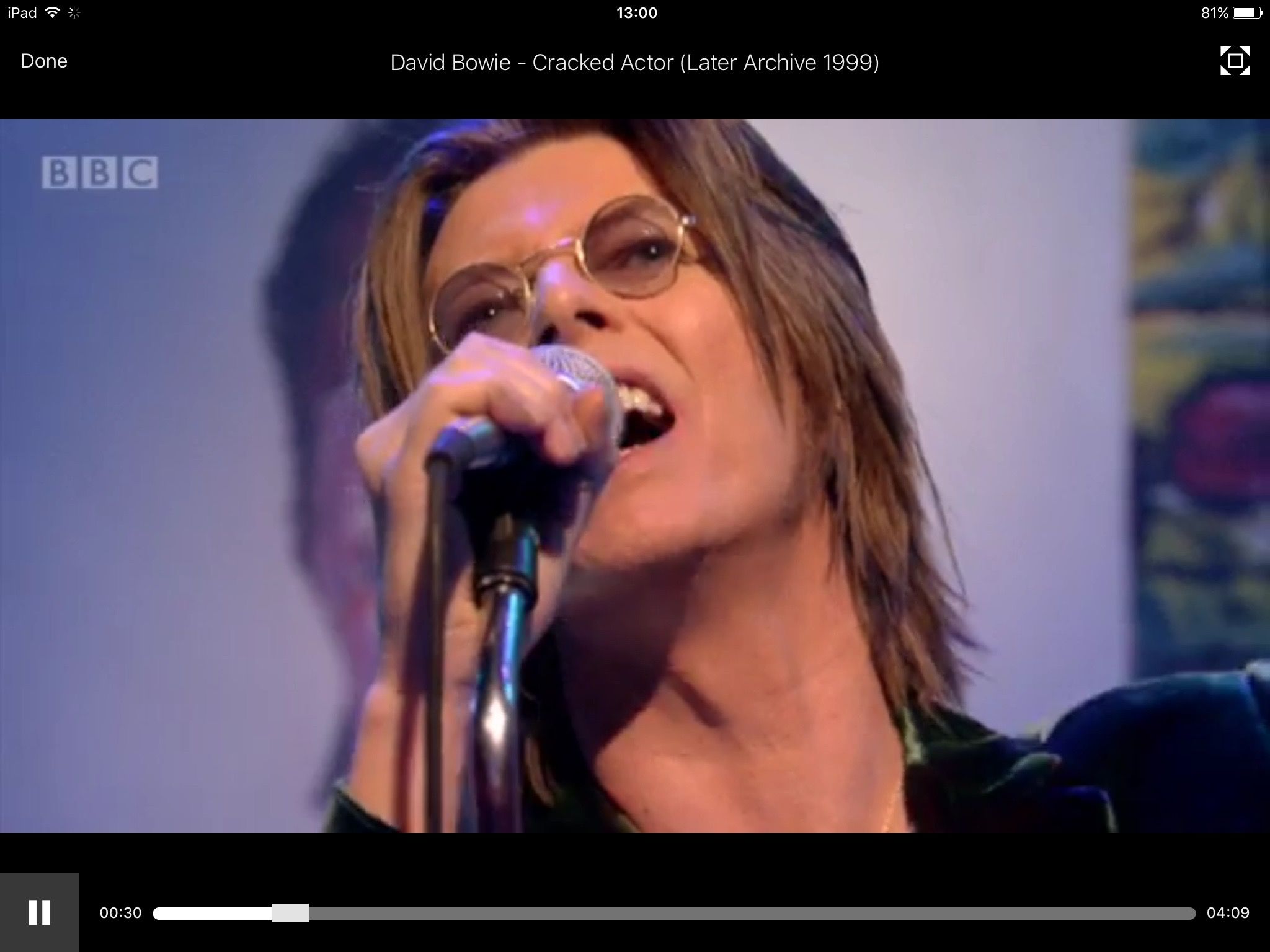 Our favourite feature is actually the Audio And Video section, as this contains lots of live sessions and broadcasts from both BBC radio and TV programmes.

Many of these are special live performances that were recorded and broadcast by the BBC itself, which means that you’re allowed to view the entire full-length performance, and this section of the app can also play material going back a full year rather than just seven days. Many BBC programmes also tend to recycle old archive material, so you’ll often find old audio and video clips going back many years, such as interviews and performances by David Bowie and George Martin that have been broadcast recently. And, as with the Tracks section of the app, you can use the Add button to create your own playlist of the best audio and video clips that you find. 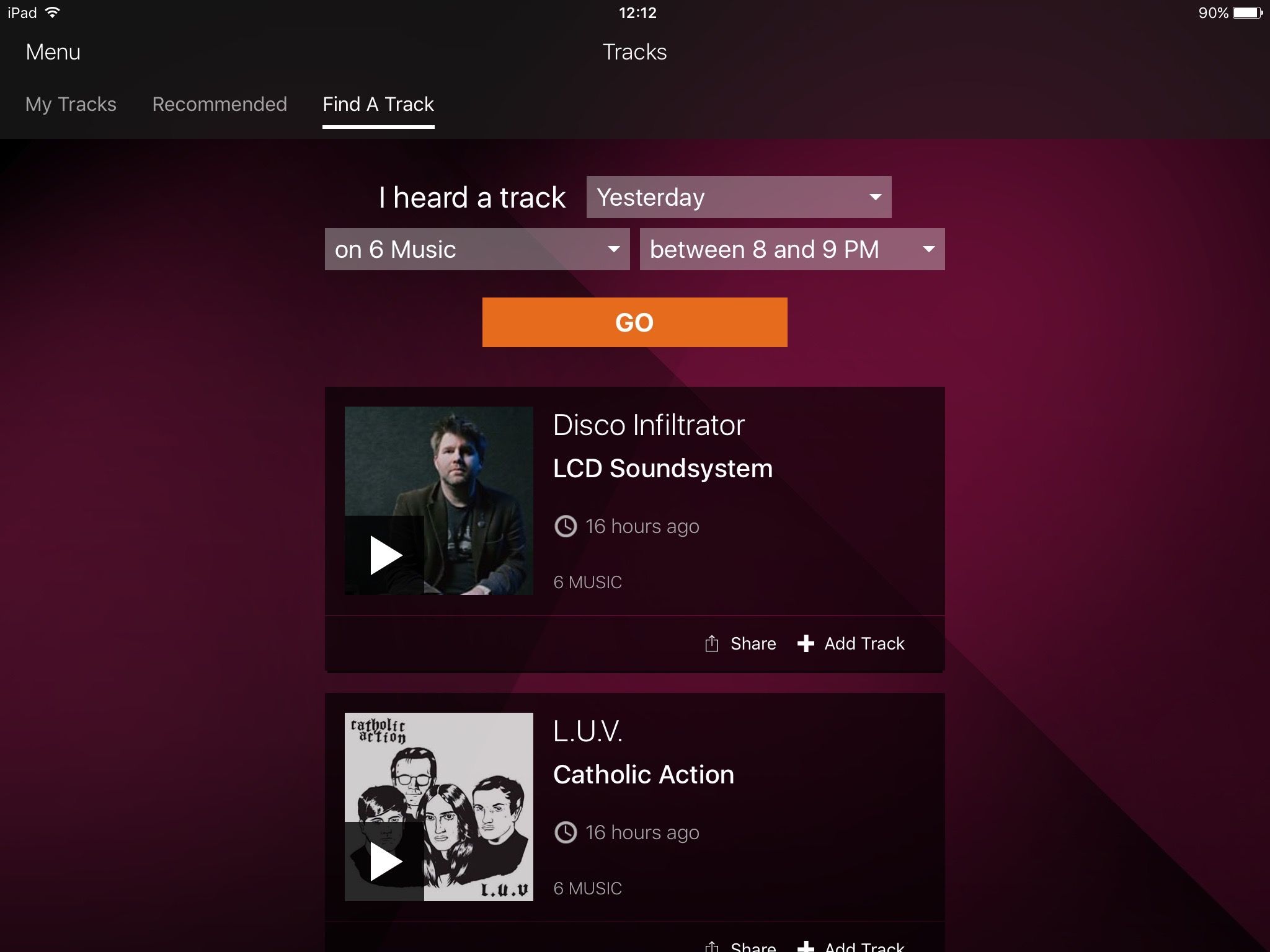 The BBC Music app isn’t perfect, and the Search tool in particular needs a bit of a rethink. Even so, it’s a great way of finding specific songs and tracks that you might otherwise have missed amongst the BBC’s enormous musical output, and it certainly deserves a place alongside Spotify and iTunes on your iPhone or iPad.