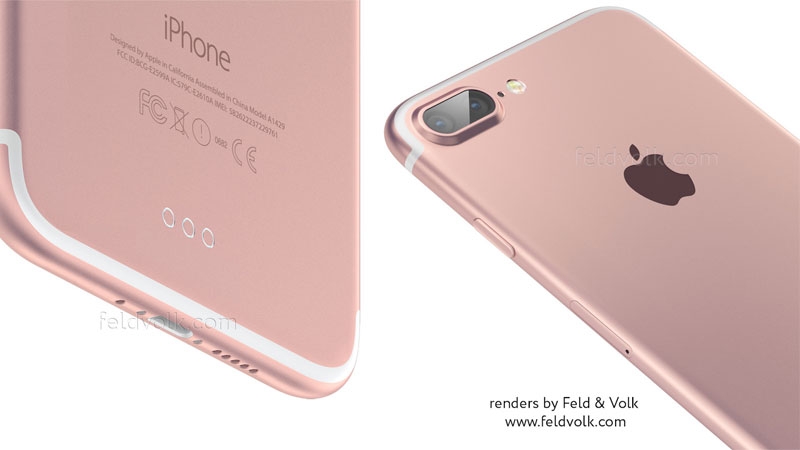 Apple held an event on 7 September 2016 where it announced the iPhomne 7 and iPhone 7 Plus. In the months leading up to the launch a wide number of pundits predicted that they would be joined by a ‘Pro’ model, but with just days to go this rumour absurptly stopped: it was almost unilaterally agreed that the iPhone 7 Pro was dead – and this proved to be correct.

But the iPhone 7 Pro remains a rumour. Perhaps we will see an interation of it next year; perhaps Apple was indeed planning an iPhone Pro and changed its plans when it was able to set up sufficient camera components to equip all of its 5.5-inch iPhones with twin lenses. Perhaps the iPhone 7 Pro never existed at all.

In this article we discuss all the clues, hints and theories about Apple’s rumoured (and possibly mythical) iPhone 7 Pro handset, including release date, design, features, leaked photos and mockup illustrations.

When Apple introduced a larger counterpart to the iPhone 6, the iPhone 6 Plus, Apple fans were shocked – for many years there was only a single flagship iPhone per year, and now fans had a choice between two. This continued with the introduction of the iPhone 6s and iPhone 6s Plus, offering consumers the choice between a 4.7in and 5.2in smartphone.

There are slight differences between the two handsets, with the Plus model featuring a higher resolution display and better camera tech. Well, in recent months a rumour has grown suggesting that Apple is thinking about expanding this to three new iPhones each autumn – it didn’t happen with the iPhone 7 and iPhone 7 Plus, but there’s a feeling that September 2017 could see an iPhone 7s and iPhone 7s Plus (or iPhone 8 and iPhone 8 Plus, depending on how jaunty Apple’s branding department is feeling) accompanied by an iPhone 7 Pro or iPhone 8 Pro.

The general theory is that the Pro would be much like the Plus-branded iPhone of the same generation in terms of design, but would offer more ‘Pro’ features for those that want it.

Bloomberg predicted (correctly) that Apple would release only two iPhone models in September 2016, meaning we did not get to see the hoped-for three new iPhones as we had been expecting for a few months. Bloomberg’s sources suggested that the dual camera we expected to see on the iPhone 7 Pro was actually going to be given to the iPhone 7 Plus.

However, Nikkei claims that the ‘Pro’ smartphone will make an appearance in 2017, the year of the iPhone’s 10th birthday, instead. It’s said that the premium model will sport an OLED display similar to that of the Galaxy S7 Edge with two curved edges, and may even be bigger than the 5.5in Plus model.

Interestingly,  rumours suggest that the iPhone 7 range will in fact be named the iPhone 6SE. There’s no information on the Pro-line of iPhones, however these rumours are in-line with what Evan Blass ‏suggested on Twitter (@evleaks) – that Apple will be naming its next phone line the iPhone 6SE.

What will the Pro smartphone look like? Japanese magazine Mac Fan has shared a detailed design schematic of the upcoming iPhone 7 Pro and although we should take leaks with a pinch of salt, the image looks promising. 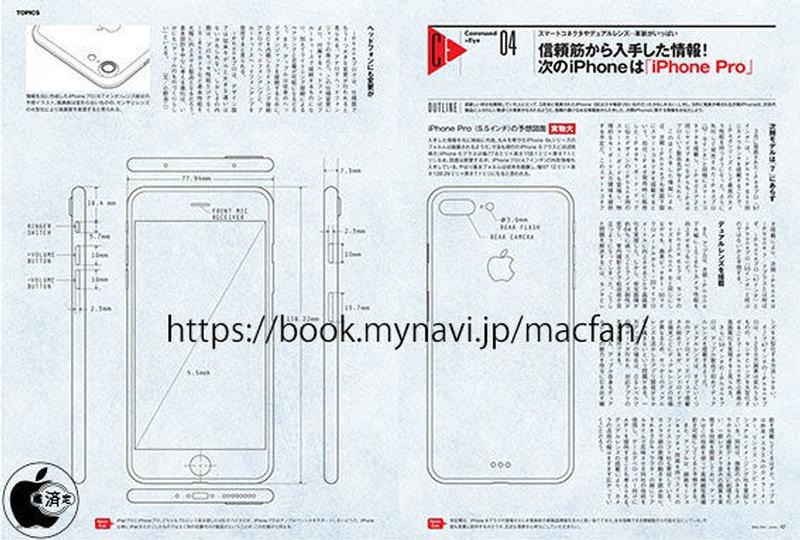 According to the magazine and the leaked schematics, the iPhone 7 Pro will feature the same overall design and dimensions as the iPhone 6s Plus, but with a couple of notable changes. The first notable change is one that Apple fans have been dreading – the removal of the 3.5mm headphone jack from the bottom of the smartphone. (If there isn’t a headphone port on the iPhone 7, there’s going to be a lot of demand for three things: Lightning headphones, Bluetooth headphones, and Bluetooth speakers.) Interestingly, while many assumed the extra space provided be the removal would be filled by a second speaker, but according to the schematics, the Pro will feature one speaker like the rest of the line-up.

Another addition to the iPhone 7 Pro is the Smart Connector, which was originally reported to be a part of the entire iPhone 7 family but is now unique to the Pro. It’s not the first leak showcasing an iPad Pro-esque Smart Connector on an iPhone 7 Pro either, as last month a photo leaked claiming to be the sleek iPhone 7 Pro chassis, complete with dual-camera setup, redesigned antennas and a Smart Connector. The photo can be seen below: 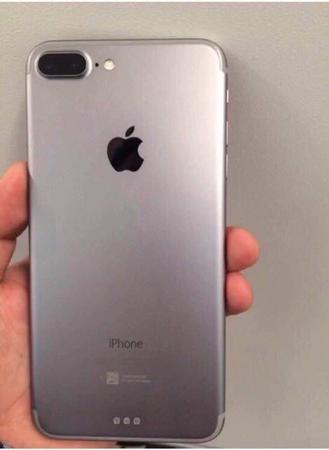 Based on the above leak, Feld & Volk has created a range of mock-ups showcasing the design, helping us get an idea of what the iPhone 7 Pro marketing will look like following the launch: 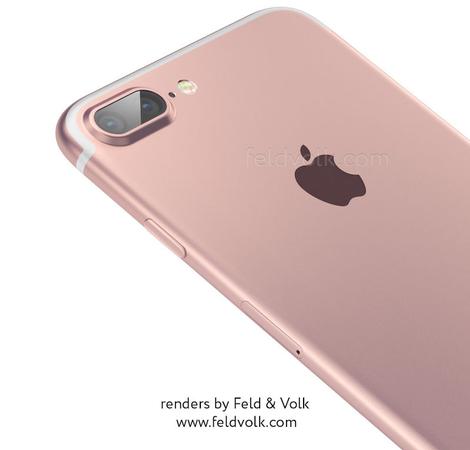 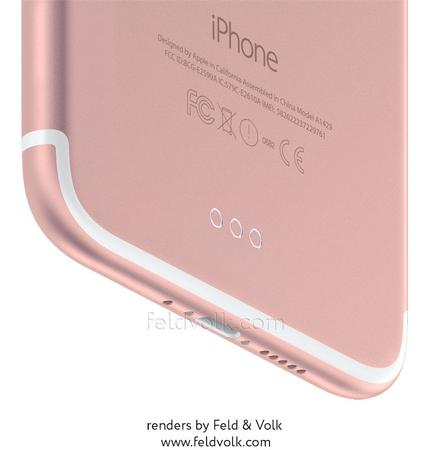 Another leak that adds fuel to the flames of an iPhone 7 Pro comes in the form of a case leak. Or two. Or more. As first picked up by 9to5Mac, cases claiming to be for the next generation smartphone appeared online, seemingly confirming a number of rumours about the upcoming smartphone, including a Smart Connector on the rear of the smartphone. You can see the photos below: 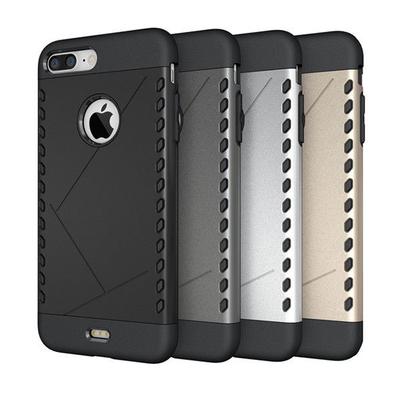 The images, if true, gives us a glimpse of the (assumingly finalised) design of the iPhone 7 Pro, complete with a binocular-esque dual-camera setup aligned horizontally with the rear microphone and dual flash. 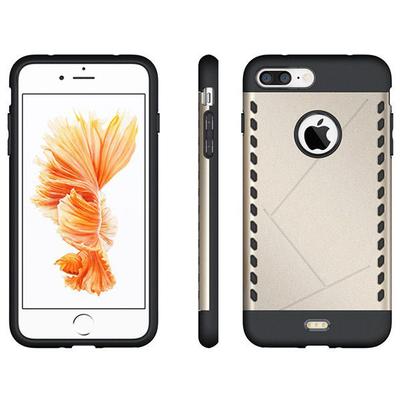 However, we have our reservations about the authenticity of the leaks. Why? To work with Apple to produce cases for an unreleased product is a difficult, if not nearly impossible feat. Of course, high-end manufacturers have more chance of this happening – but the company that created the cases is realtively unknown. If the company did manage to work with Apple, why would it ruin chances of future partnerships by leaking valuable information months before its release? And why would they be on sale right now? So, even though we think this is what the iPhone 7 Pro will look like, we doubt that these ‘leaks’ are genuine.

More recently, notorious Apple leaker Steve Hemmerstoffer of nowherelse.fr has tweeted a myriad of photos the entire iPhone 7 family – the iPhone 7, iPhone 7 Plus and 7 Pro too – with the Pro featuring the much rumoured dual-camera setup and smart connector. You can see the tweet below:

While Hemmerstoffer is usually fairly accurate with his leaks, we’re not entirely convinced by these photos. Why? If you look carefully at the rear of the iPhone 7 Pro, you’ll notice something a little ‘off’ with regards to colour/brightness surrounding the rumoured smart connector – possibly a poor Photoshop attempt, although it could also be weird lighting. While we hope that these are in fact real, we’ll have to wait until September to find out for sure.

Our most recent look at the upcoming iPhone 7 Pro comes via popular YouTube Channel Unbox Therapy where YouTuber Lewis Hilsenteger shows off the upcoming iPhone 7 Plus (or Pro, as it sports ‘pro’ features like the Smart Connector) and, like with other rumours, seems to confirm a number of features of the upcoming smartphone. It features the rear-facing dual-camera setup, the missing headphone jack that has caused controversy for almost a year now and even the iPad Pro-esque smart connector.

During the video Hilsenteger uses digital calipers to measure the iPhone 7 Plus/Pro chassis, which is apparently fractionally slimmer than the current iPhone 6s Plus. It’s claimed that the iPhone 7 Pro will be 7.14mm when compared to the 7.18mm 6s Plus, although this is within a margin of error in the calipers and as this is only a dummy case unit, it may be thicker once the internals are included. It’s also worth noting that the previously rumoured Blue iPhone 7 was inaccurate (it’s apparently going to be a darker shade of grey/black instead), bringing the valididity of this video into question.

If the iPhone 7 Pro is real, how much will it cost compared to the iPhone 6s and iPhone 6s Plus? While we’re still months away from finding out for definite, a recent leak via Weibo seems to provide us with pricing information for not only the iPhone 7, but the iPhone 7 Plus and iPhone 7 Pro too. While the pricing may be inaccurate, especially as it’s in Chinese Yuan and not GBP, it seems to confirm the existance of the third iPhone model if nothing else.

It’s worth keeping in mind that this was intended for the Chinese market and we haven’t seen much in the way of change in pricing, only for the top-end models.

The iPhone 7 Pro is said to be largely the same as the iPhone 7 Plus in terms of internals, boasting the same display and processor, but with a few notable differences that bring it into the ‘Pro’ class. According to a report from KGI Securities Analyst Ming-Chi Kuo who has an amazing track record with predicting unannounced Apple devices and features, the iPhone 7 Pro will feature a whopping 3GB of RAM, up from 2GB available on the iPhone 6s and 6s Plus. This should give it an edge in terms of performance and coupled with (what we expect to be) a 64-bit A10 chipset, should provide users with an incredibly powerful smartphone.

A recent report from The Wall Street Journal suggests that Apple may be about to ditch the 16GB base model, and that the iPhone 7 family (7, 7 Plus and 7 Pro) will all come with at least 32GB storage as standard. Writing for the Wall Street Journal, Joanna Stern claims that “The new iPhones are expected to have more storage for those photos. Instead of 16GB as a starting point for the entry-level iPhone, the new starting point will be 32GB, according to a person familiar with Apple’s iPhone plans. Hallelujah! I’ve long said that keeping the 16GB iPhone was just a ploy for Apple to get people to buy the 64GB model—for $100 extra.”

While WSJ doesn’t provide any evidence to back up the claim, publication has a fairly accurate track record when it comes to leaks and rumour,s so this one might just be true.

Along with the upgraded internals, the flagship feature of the iPhone 7 Pro is said to be a rear facing dual-camera setup comprised of two iSight cameras. The dual-camera setup is said to protrude slightly from the case as opposed to the flush nature of the iPhone 7. There is a good reason for this though, as its been speculated that this may allow for recording of standard and slow-mo videos at the same time, upgraded Live Photos and even possibly providing users with different focal lengths. Of course, the official use for the dual-camera setup will not be revealed until the launch event in a few months’ time.

Last, but not least, it has been suggested that the iPhone 7 Pro may be waterproof much like Samsung’s 2016 flagship, the Samsung Galaxy S7. The iPhone 6s and 6s Plus, though not marketed as being waterproof, can survive a small stint in water thanks to a gasket around the sides of the smartphones and the logic board being covered with a waterproofing material. It won’t survive as long as the Galaxy S7 submerged under water, but hopefully the iPhone 7 Pro will.

We’ll be updating this section with the latest rumours as soon as we hear them, so make sure you check back regularly for the latest information on the iPhone 7 Pro.