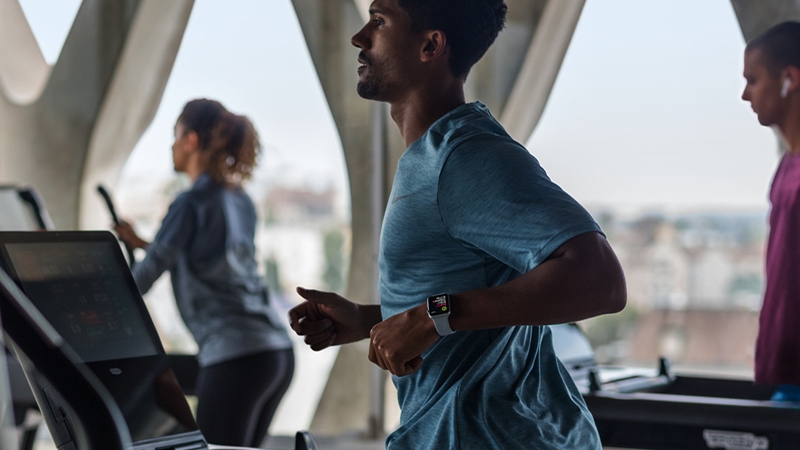 Apple launched its Apple Watch Series 3 on 12 September 2017, but you can get a bunch of new features on your existing watch – such as a range of new workouts and workout labels – for free by upgrading to the watchOS 4 operating system software.

We got our first look at watchOS 4 at WWDC 2017 on 5 June 2017, but on 19 Sept it launched to the public at large, and you can install it now. Read on to find out about the new features watchOS 4 (and later point updates – watchOS 4.1 and so on) brings to your Apple Watch.

If you’re thinking of buying an Apple Watch, by the way, you should read our Apple Watch buying guide 2017 and take a look at the best Apple Watch deals.

At Apple’s event on 12 September it revealed that the watchOS 4 software would be available to download on 19 Sept, and it’s freely available now.

Here’s how to install watchOS 4.

We expect another big update next autumn: take a look at our watchOS 5 rumours article for the latest information on that.

There have been a number of smaller point updates since watchOS 4 was released. Most of these have added minor tweaks and bug fixes.

watchOS 4.3 is scheduled to launch in spring 2018, and the first beta of this update came out at the end of January. Nightstand Mode now works in both orientations (previously it was landscape only), there’s a new charging animation, and you can use your watch as a remote for music playing on the companion iPhone.

This is all fairly minor stuff compared to…

It allowed you to stream Apple Music on a watch using its own LTE cellular connection – just look out for the effect on battery life. And there was a new radio app, too.

You can also use the GymKit tech to connect your watch (any model) to compatible treadmills and exercise bikes and get better data readings. We still haven’t seen any GymKit-compatible equipment in the wild, but hopefully gyms will start updating their machines soon.

Here’s a rundown of the new features watchOS 4 brings to your Apple Watch.

We already knew that glucose monitoring is coming to the Apple Watch, although there’s not much word yet on the companion hardware that will presumably be required.

At the 12 September event Apple revealed that there will be enhanced heart rate monitoring in watchOS 4. The watch will notify you when it detects an elevated heart rate when you’re not active.

A new ‘Siri face’ displays information personal to you using machine learning, similar to the proactive functionality and contact suggestions in iOS. 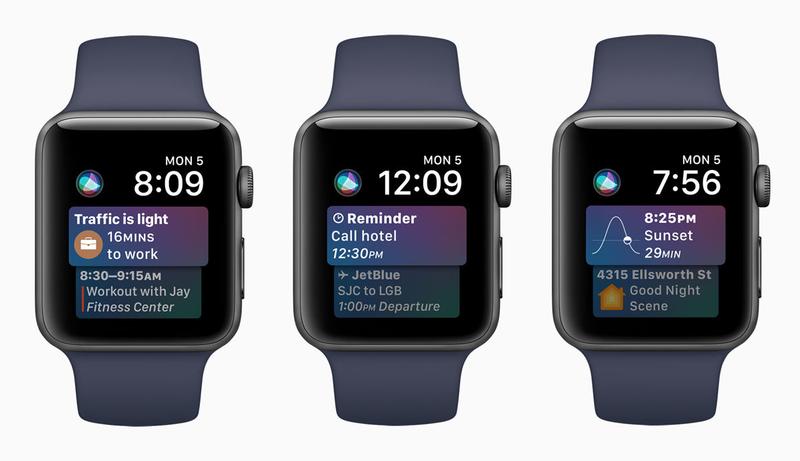 The Siri face displays information using machine learning, to match your routine – so you’ll see the information and app shortcuts that are most relevant to your current needs.

You can rotate the Digital Crown to scroll vertically through the various notifications and apps on the face.

Apple also revealed two other groups of watch faces. First up is the kaleidoscope face, which you can rotate using the Digital Crown, producing a trippy effect. The visual elements rotate and change shape, just like those weird toys everybody apparently loved in the sixties. 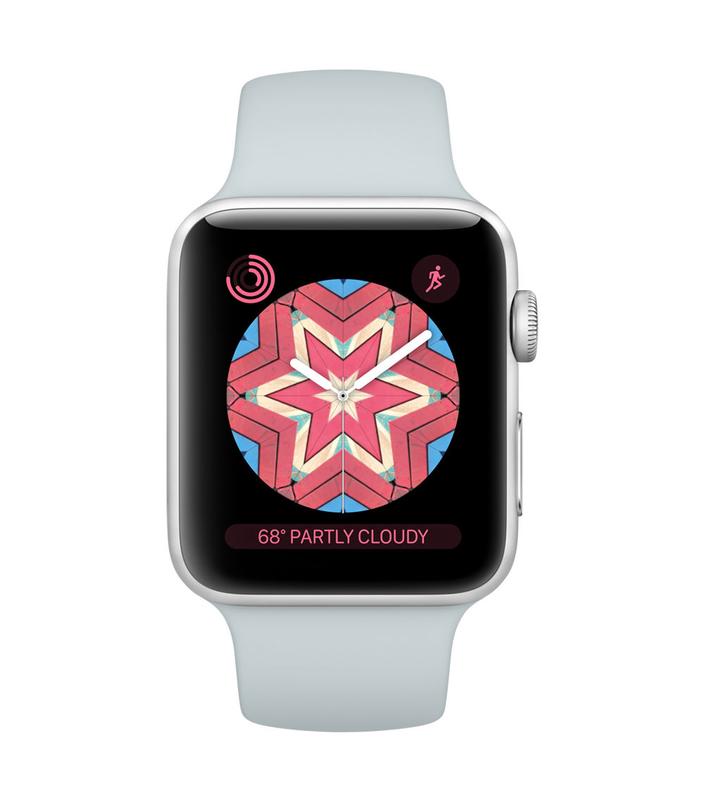 There are also new Disney faces, following on from the popular Micky and Minnie Mouse faces already available. Woody, Jessie and Buzz Lightyear (from Toy Story) are all coming to the Apple Watch. You can select one particular character, or go for the (excellent) Toy Box option which mixes up all of them. 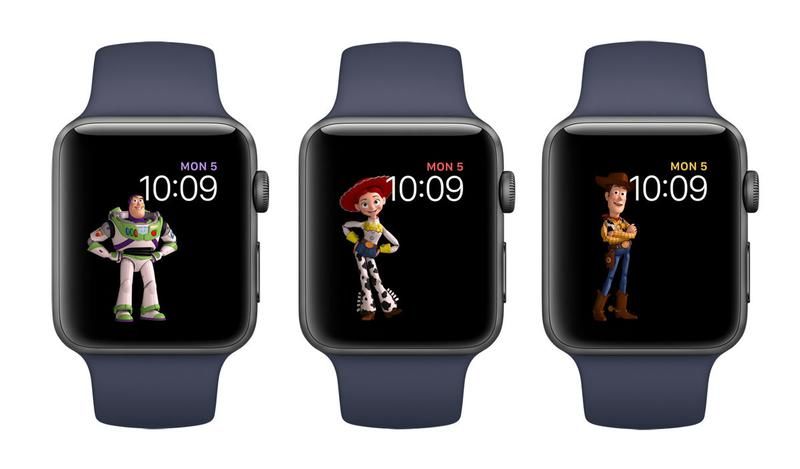 These seem to be a bit more advanced, visually speaking, than the previous faces. Mickey and Minnie were animated, but in a fairly limited way – jiggling back and forth in time with the clock, basically. But the new faces incorporate multiple, longer animations that behave differently each time you rotate your wrist.

Apple called these ‘vignettes’ – the character climbing on to the watch face from below, for example.

Activity (and what we consider to be its companion app, Workout) are almost certainly the most popular apps on the watch. So we were pleased to see that Apple is continuing to tweak and add to these apps. As elsewhere, Apple is gradually increasing the influence of personalisation and machine learning.

The notifications in Activity are now more personalised to you – they’ll let you know if you’re close to an achievement, for example. And there’s ‘smart coaching’, which again is personalised to you. This will offer monthly challenges, based on your history and activity records.

There’s a cool new sparkly animation to celebrate filling your rings in Activity (it looks nice, but may pall after a few months…), and a change to the way pool swim workouts work. Apple says that taking a rest at one end of the pool will automatically be detected and marked as the end of one set of laps and the beginning of another – handy for accurate timings.

Apple has also realised that notifications aren’t important during a workout, so Do Not Disturb will automatically be activated when a workout is initiated, and then automatically turn it off once the workout is complete.

Oh, and one last change to the Workout interface: you can swipe left from the workout menu to access music controls. (Why hasn’t this been a feature from the beginning?)

We’re really pleased to see Apple implement two-way data exchange with gym equipment. (The hopeless inaccuracy of treadmill-based workouts has long been an annoyance – when a device with a more accurate record is right there!) 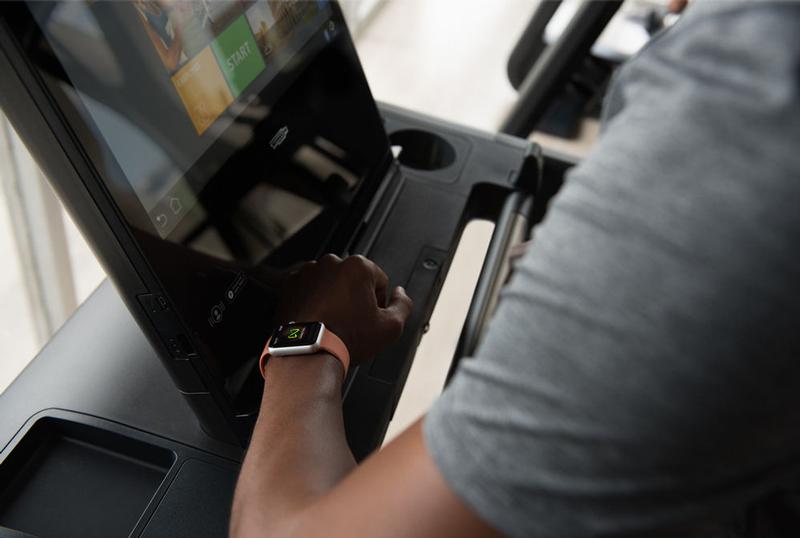 You simply need to tap the NFC tag to connect your watch with the gym equipment, although obviously you’ll need to find a gym that supports it first. This is likely to take a while to filter out into the world outside California, we’d guess.

Lots of new workout types were spotted in the run-up to watchOS 4’s launch, although most of these are not immediately available from the Workout select screen and it’s not entirely clear how they are activated.

At the time, TechCrunch argued that these were new optional labels for workout types that you program yourself rather than new additions to the default workout list, and that appears to have been borne out.

There is one new addition to the workout select screen, however, and it’s a good one: High Intensity Interval Training. This is a demanding and highly effective form of workout that uses heart rate measurements to push you to your limits – we really enjoyed using this with the Moov HR Sweat activity tracker. 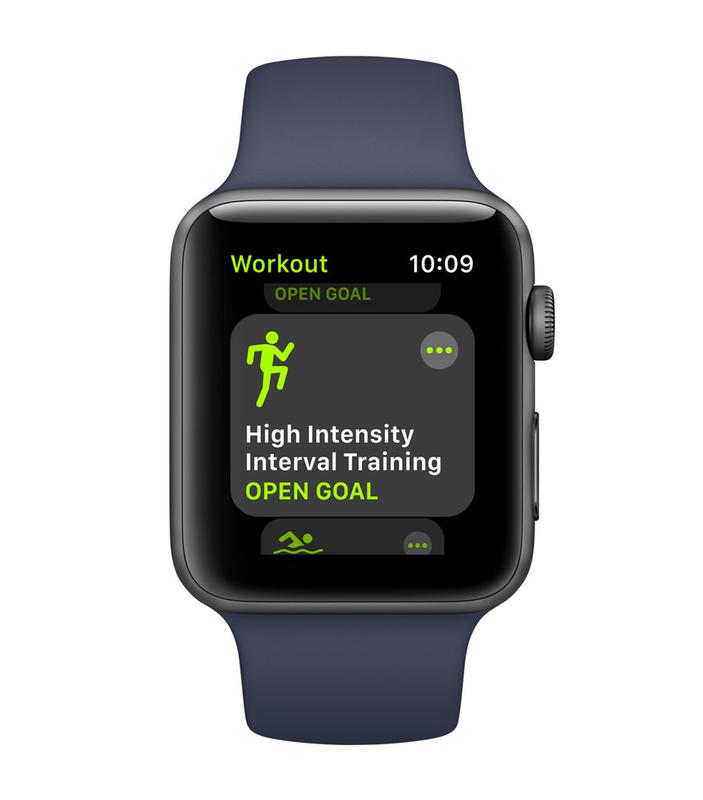 The Music app on Apple Watch has been redesigned, and looks much better. There’s nice album art – you rotate the Digital Crown to scroll through.

(The Digital Crown seems to be getting far more use in watchOS 4 – which is great. It feels like an underused control in watchOS 3.)

The new Music app tries to anticipate your needs – you’ll automatically see music and playlists that you listen to regularly, freshly updated on your watch. It also includes Apple-curated playlists including the likes of Heavy Rotation, Favourites Mix and New Music Mix. Of course, you’ll need an active Apple Music subscription to see these option.

You’ll be able to pay friends via Apple Pay on the Apple Watch via an Apple Pay Cash account, although it’s initially limited to US users only.

There’s a new, redesigned dock interface – you can vertically scroll through recent apps using the Digital Crown. (There it is again!)

There’s a new blinking light activated via Control Centre – useful for safety on night runs. There’s also a plain light, in either white or red.

Which Apple Watches can run watchOS 4?

watchOS 4 can be installed on any Apple Watch model – first-gen Apple Watches as well as the more recent Series 1 and Series 2, and of course the new Series 3 (which we assume will ship with watchOS 4 already installed).

The only restriction is that you need to be using an iPhone 5s or later as the companion phone.