Apple has unveiled an exciting update to the Apple Pencil at its 30 October special event, alongside a new, redesigned iPad Pro. Here, we bring you everything you need to know about the Apple Pencil 2, including its price, release date, specs and new features.

The 2018 Apple Pencil stylus for iPad has a new design, wireless charging capabilities and a new double tap feature.

The original Apple Pencil is still available to buy for for £89/$99 on Apple’s Store. But if you’re looking for a cheaper alternative, take a look at our roundup of the best styluses for iPad.

Release date: When is the Apple Pencil 2 coming out?

Following its 30 October unveiling, the new Apple Pencil is available to pre-order now, and will be dispatched on 6 November.

You can pre-order it now from Apple here.

Price: How much does the Apple Pencil 2 cost?

You can pre-order it now from Apple here.

Design: What does the new Apple Pencil look like? 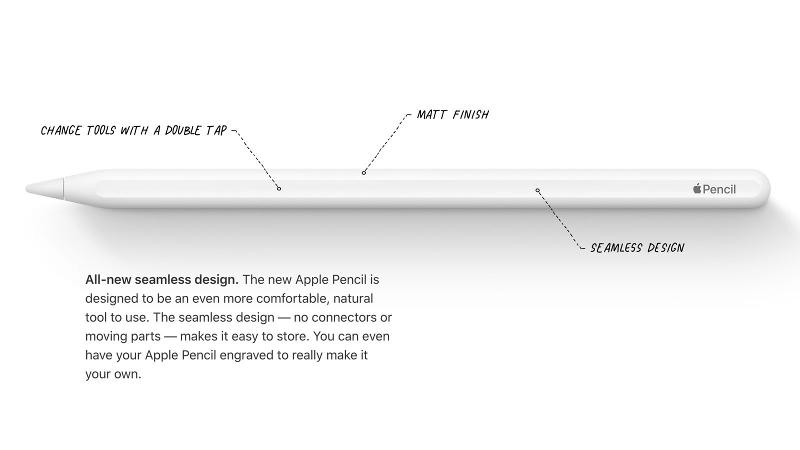 The new Apple Pencil has a new design that’s a lot more practical than its predecessor in so many ways.

Instead of being completely smooth and rounded like the original, it has a matt finish for better grip and a flattened edge to stop it from rolling off the table.

Those flat edges also allow some gesture functionality, the ability to attach it magnetically to the side of the iPad Pro and also to charge wirelessly, all of which we talk about in more detail below.

It also loses the metal portion and removable end that previously housed the Lightning connector.

You can have your Apple Pencil engraved should you wish to personalise it, too.

What new features does the Apple Pencil 2 have? 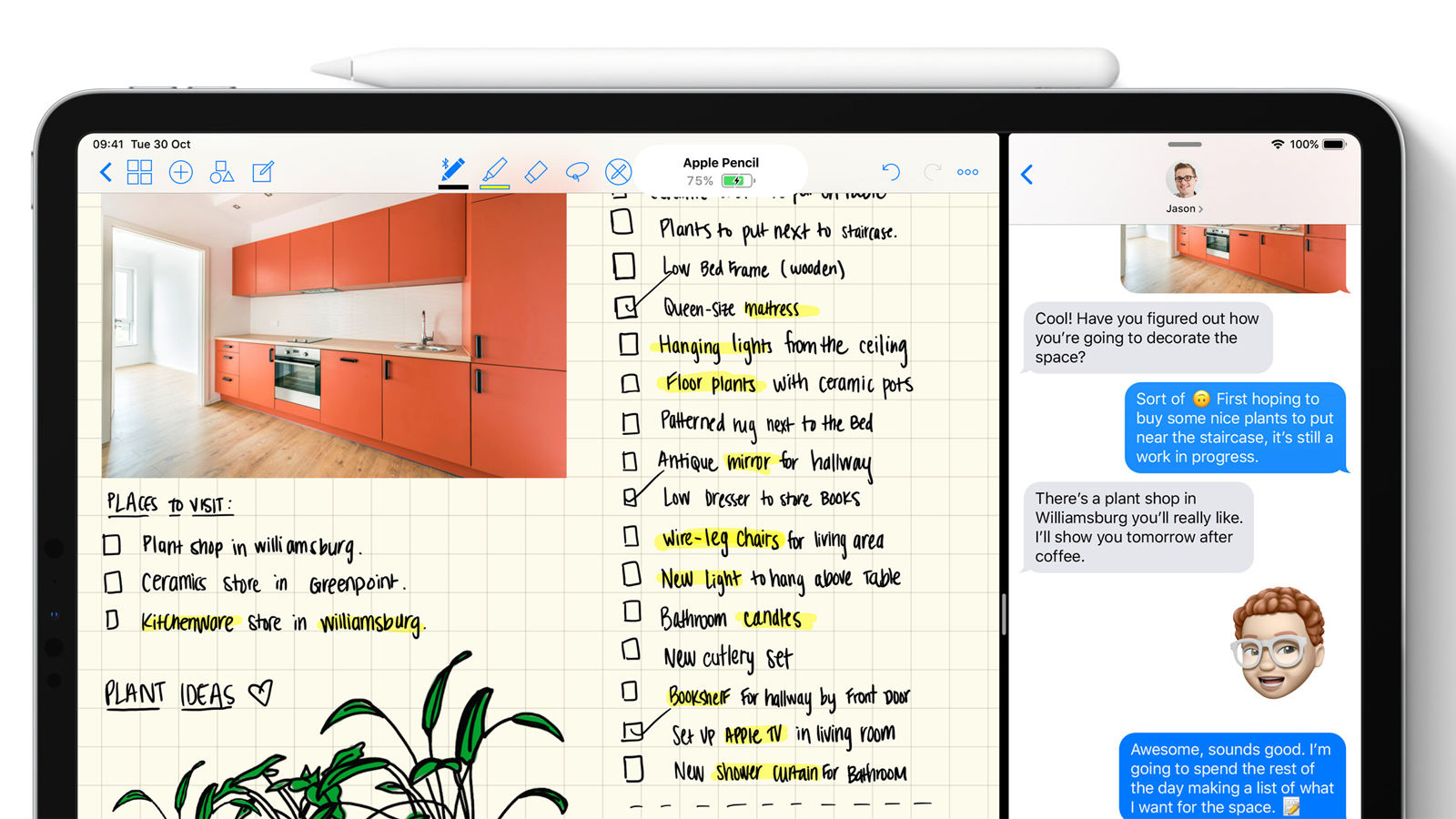 As rumoured, the new Apple Pencil snaps onto the side of the new iPad Pro magnetically. What’s more, in doing so the stylus will automatically pair with the iPad and begin charging wirelessly.

This makes the Apple Pencil so much easier to charge and transport than previously – before the Apple Pencil charged via the Lightning port on the bottom of the iPad, sticking out in a clunky and impractical way and making it impossible to charge both at once.

The magnetic attachment also means the Pencil won’t roll off the table and get lost on the floor.

The double tap feature of the new Apple Pencil is particularly intuitive. Instead of having to put the pencil down to interact with the iPad and change tools, apps will allow you to double tap on the side of the Pencil to change tools. Perhaps you want to switch from a marker to an eraser quickly and easily, for example.

The double tap feature is customisable to allow you to adapt it to suit your needs. Check out our round-up of the best apps for Apple Pencil for ideas on which apps you might want to use.

What doesn’t the Apple Pencil 2 have?

There were plenty of additional rumours ahead of the Apple Pencil 2 launch that turned out to be inaccurate. It’s possible they’ll come to light in a future model of the iPad, so we’ve kept them below to give you an idea of what else we thought might happen.

An October 9to5Mac report suggested that the Apple Pencil 2 would pair using a W1 chip, like AirPods. W chips are used in AirPods and some Beats products, and work on top of Bluetooth while bringing extra benefits, such as better battery life, range and pairing – in fact they would automatically pair to any device registered to your iCloud account.

Apple’s W1 and W2 auto-pair chips could even make it possible to use Find my iPhone to find a lost Pencil.

The 9to5Mac report claimed that you’ll be able to switch between devices without connecting to the charging port. Unless you have several compatible iPads this isn’t a problem, but a welcome addition nonetheless.

Ability to work on non-touch-sensitive surfaces

This is by far the most exciting rumour we’ve heard, and the best thing is that it’s backed by patent activity.

Patently Apple has spotted references to styluses being used on any metal surface (such as “the sides and/or back surface of an electronic device”), which is intriguing enough; but Apple’s ambitions could go further still and extend to any non-touch-sensitive surface, such as a desk. You would scribble away with the Apple Pencil and its movements would be transmitted to an iMac or similar machine sitting nearby.

It’s desperately vague at the moment, but word on the street suggests Apple is focusing on expanding the range of applications with optimised support for the Apple Pencil. It’s possible this is the case with the Apple Pencil 2, but we haven’t got confirmation on that yet.

Wei Feng, the Chinese-language site already quoted in the release date section, writes: “The so-called Apple Pencil 2 will have what kind of characteristics? According to the supply chain, the answer is ‘compatible with a large number of applications’.”

Like most tech journalists, I suspect that the development and launch of the 12.9-inch iPad Pro was at least partly a response to the relative success of Microsoft’s Surface line of tablets, which also have large screens and latterly come with styluses. (And are marketed at business users.) But the stylus for the Surface Pro 4, while weaker in many respects than the Apple Pencil, has one clear advantage: the option to buy interchangeable replacement nibs of various sizes and shapes. (You can buy replacement nibs for the Apple Pencil but they’re always the same default size and shape.)

An Apple patent has been discovered, however, which suggests that future Apple Pencils may offer a similar feature.

Patent 9,329,703, filed in 2011 and published on 3 May 2016, describes an “intelligent stylus” where each nib has its own sensor, which pairs with a separate sensor in the body of the stylus.

Returning to patent 9,329,703, Apple also mentions the possibility of turning the back end of the Apple Pencil into an eraser.

From the detailed description: “For the additional contact/proximity sensor at the stylus non-tip end, the MCU can determine the stylus’s condition at the non-tip end as touching or hovering over a surface, e.g., to emulate an eraser.”

Another Apple patent, originally filed in Q4 2014 but published in February 2017, reveals plans for an Apple pencil with multiple touch and force sensors along the body of the device. The sensors could be used to detect touch gestures along the device, as well as when the Pencil is being rotated. They could also detect how much pressure is being used in order to control scrolling or zooming, or use pinching as a way to ‘pick up’ and move on-screen objects.

This has come to light in a minor way with the double tap feature, but the patent describes further uses that we could see in a future Pencil.

Sounds like a stylus version of Touch ID to us.

Another one from a patent filing. Patently Apple has cleverly spotted what it believes to be a reference in a 2014 Apple patent filing to a stylus that can control the trackpad on a Mac. We’ve wondered for a while if the Apple Pencil will gain the ability to control iPhones and other iPads other than the Pro models, but the Mac range is a bigger leap than most of us expected.

The patent, for a ‘Stylus With Inertial Sensor’, includes drawings that show what appears to be a Mac and trackpad setup: 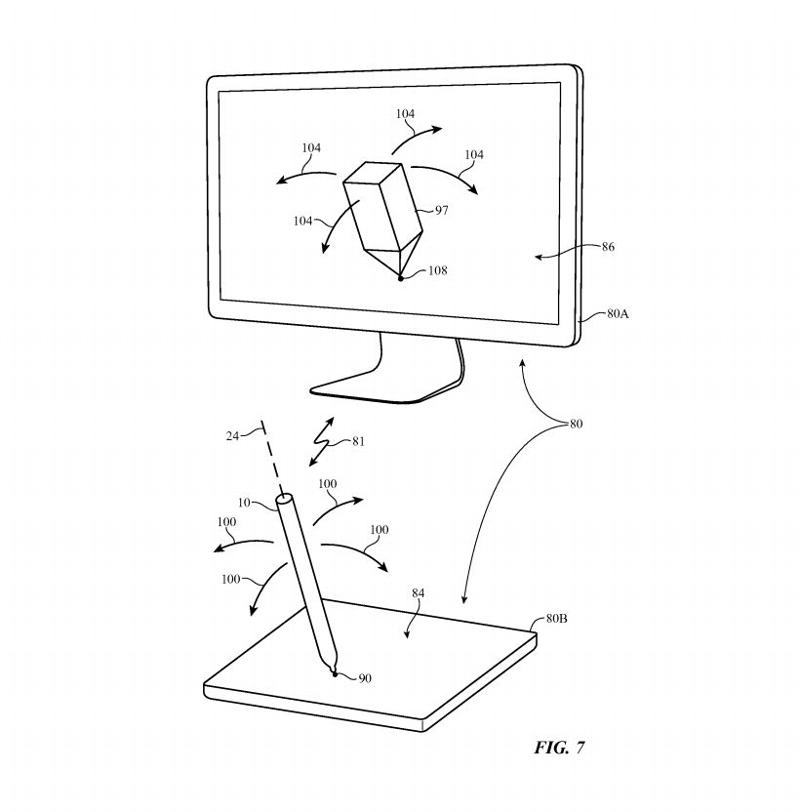 It seems unlikely that we’ll see Apple Pencil compatibility on the Mac Magic Trackpad before we see it on the iPad mini, for example, but watch this space for further developments.