iOS 10, the newest operating system for the iPhone and iPad and a free update for anyone with an iPad 4 or later or an iPhone 5 or later, offers a raft of new features and various tweaks to the interface: but it’s not all good news. Large numbers of people have installed iOS 10 and then hit a snag of some kind.

This is a common occurrence with a major software update, of course, so don’t worry. In this article we collect some of the most frequently reported problems with iOS 10 and how to fix them, along with some advice on tweaking the settings to your satisfaction.

iOS 10 troubleshooting tips: Before we start…

This may be too late, but just in case it’s not: before you make any kind of iOS update you should back up your devices. Things can and do go wrong when installing a new version of iOS, and the fact that things have always gone smoothly in the past is no reason to assume they will this time.

Read more: How to back up an iPhone or iPad

This was a… not exactly common complaint, but one reported by a worrying number of iPhone and iPad owners when the iOS 10 update first rolled out. iPhones simply stopped working after the update.

Fortunately this one is relatively easy to fix.

Plug your device into a Mac or PC, and open iTunes.

Force-restart your phone and put it in Recovery Mode: press and hold the Sleep and Home buttons until you see the Recovery Mode screen.

When iTunes asks you if you want to update or restore, pick update.

This process may need to be repeated if the update process takes more than 15 minutes or so, but you’ll get there eventually.

Some users have reported that a previously happy Touch ID setup stopped working when they made the update to iOS 10. This is a pain, but rescuable – you will probably need to clear your fingerprints and enter them again.

First, however, try something simpler: go to Settings > Touch ID & Passcode, enter your passcode and then tap the buttons next to Apple Pay and iTunes & App Store so they turn white. Power off your iPhone and turn it back off again, then go back into Settings and turn those two buttons back to green (you’ll need to enter your Apple ID password).

Has that fixed the problem?

If not, go through the fingerprints stored in Settings > Touch ID & Passcode – tap each one in turn – and tap Delete Fingerprint. Then go back and tap Add A Fingerprint, and put them back in. This is a bit of a hassle, but should fix the problem.

iOS 10 troubleshooting tips: Battery life is worse than before

Does battery life seems to have taken a hit since you updated to iOS 10? You’re not alone. But there are some tricks you can use to wring a few extra hours between charges.

There are obvious steps, such as turning down the brightness and audio volume (both accessible via the Control Centre by swiping up from the bottom of the screen), and it’s worth tightening up your Auto-Lock time so the screen goes dark after a shorter period of non-use (Settings > Display & Brightness > Auto-Lock). While you’re in the Display & Brightness settings, turn off Raise to Wake, which will inevitably light up the screen on occasion when it isn’t needed. 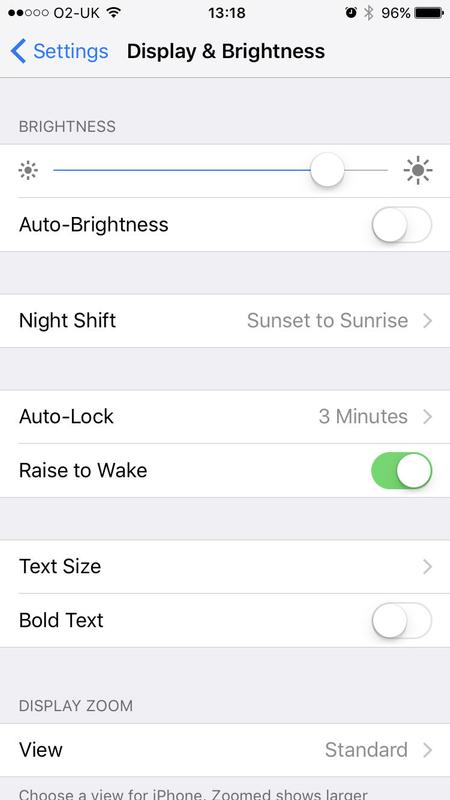 The antenna is a significant drain on battery too, so make judicious use of Airplane Mode when you don’t need to be online/accessible so that your phone isn’t burning power looking for a signal. (Switching on Airplane Mode and then turning WiFi back on can be a good compromise. These are all accessible via Control Centre.)

Low Power Mode, which is supposed to increase an iPhone’s battery life by around 3 hours, will be offered to you when your device hits 20 percent battery capacity (and is then turned off automatically when you charge back to 80 percent), but remember that you can activate it voluntarily at other times. Go to Settings > Battery and tap the slider next to Low Power Mode. 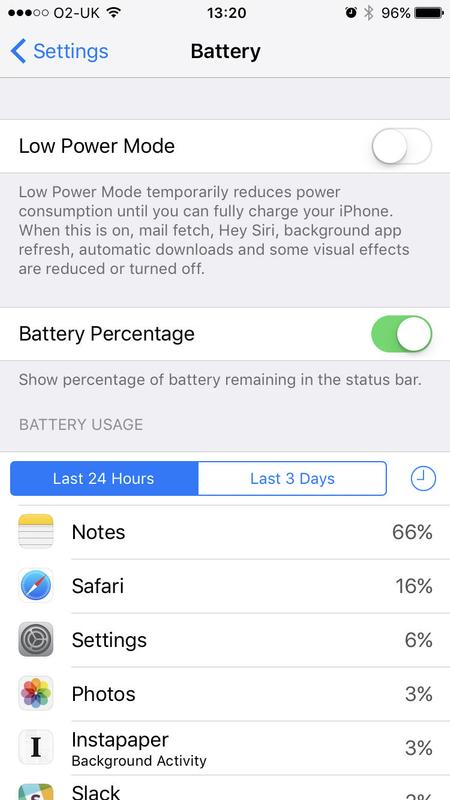 In that same section of Settings, you can also see battery usage stats, indicating which apps have been particularly hammering the battery over the past 24 hours or 3 days; obviously this will be dominated by ones that you’ve used a lot, but if there are apps here that are non-essential and appear to be using more power than their usage and/or importance warrants, it may be worth using them less.

However, don’t worry too much about closing apps when you’re not using them – it’s a myth that this saves power (as confirmed by no less an authority than Craig Federighi) and restarting them actually uses up a little more.

For more tips along these lines, see How to improve iPhone battery life

Battery problems with iOS 10 (and iOS 10.0.1) have been widespread enough that we suspect Apple will address them in a future update – so look out for that.

There have been reports of iPhone owners having trouble connecting to their cellular networks, or struggling to get a signal in places where there previously wasn’t a problem, since installing iOS 10.

T-Mobile customers appeared to be most badly affected at first, and the provider indeed advised them not to install iOS 10 until it had tackled the problem. But you should be okay now.

T-Mobile also said that restarting your phone is a good, albeit temporary, way of restoring cellular connectivity.

iOS 10 troubleshooting tips: Why do I have to press the Home button to unlock the phone?

We’re past the bugs and glitches and into what are deliberate features and design decisions that you might just happen not to like very much. We’ll start with the way that Apple has got rid of ‘Swipe to unlock’ and replaced it with ‘Press Home to unlock’. This has caused some ructions.

But while you can’t bring back Swipe to unlock, it is possible to tweak the settings so you don’t have to actually press the Home button: you just rest your fingertip on the Touch ID sensor and it will do the necessary. (Obviously this only applies if you’ve got Touch ID. iPad 4 and iPhone 5 owners are out of luck here.)

Read more: How to unlock iPhone or iPad in iOS 10 without pressing Home button

This is specific to the iPhone 7, which has a ‘solid-state’ Home button which doesn’t actually click onwards when you press it: instead, a small haptic engine next door gives a little buzz which is supposed to make it feel like this happened. Some of us found the default buzz unrealistic and over the top.

Luckily this is another simple one to fix:

Go to Settings > General > Home Button and then try the three ‘strengths’ of vibration to see which you prefer. We recommend the subtlety of 1.