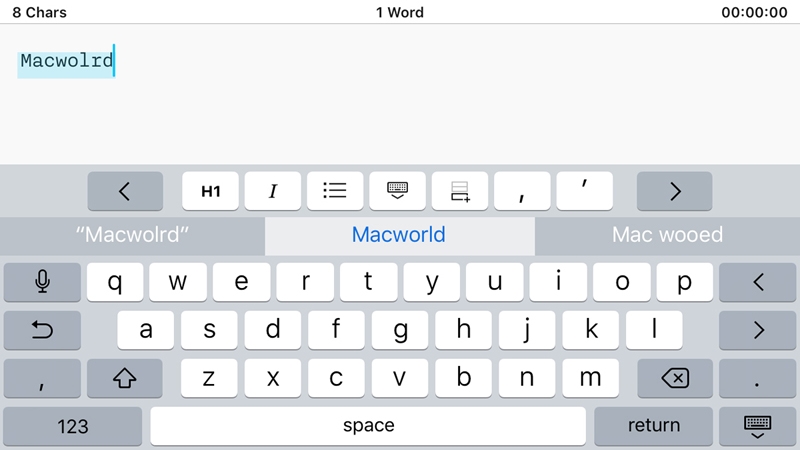 Autocorrect causes headaches for lots of iPhone users – not to mention those using Macs, iPads and pretty much every computing device out there. We’ve all had our own nightmare Damn You Autocorrect moment.

In this article we offer some tips on autocorrect, and the similar feature text replacement: we show how to train an iPhone, iPad or Mac’s autocorrect features, force your system to learn new spellings, and generally get autocorrect and text replacement to behave exactly the way you want.

What’s the difference between autocorrect and text replacement?

As computing technology has evolved, so too has its desire to get you spelling things correctly. But whereas once you had to fire up a spellchecker and have an app laboriously go through an entire document, these days your Macs and iOS devices will sort your spellings on the fly.

This is autocorrect, baked deep into every Apple operating system. The theory is that you just get on with typing, and let the Mac deal with those moments when your fingers hit the wrong keys. But autocorrect itself sometimes errs, and so you need to know how to overrule and tame it. This feature will show you how.

Furthermore, related text replacement functionality also sits at the heart of macOS and iOS. This is in similar territory to autocorrection, but is based around triggers and phrases defined by you, rather than whatever’s in Apple’s dictionary. For example, your Mac, iPhone or iPad will correct ‘helllo’ to ‘hello’. But if you specifically want a construction like ‘addr1’ to expand to your home address (or if you want ‘aapl’ to turn into the Apple logo), text replacement’s where to head. So we’ll be looking at that too.

How to turn off autocorrect

Before we go any further, let’s briefly deal with those of us who simply don’t want anything to do with autocorrect. Here’s how to turn it off and forget about it.

On iPhone or iPad, open the Settings app and then go to General > Keyboards. Set the Auto-Correction setting to Off.

We deal with this in more depth elsewhere: How to turn off Autocorrect. 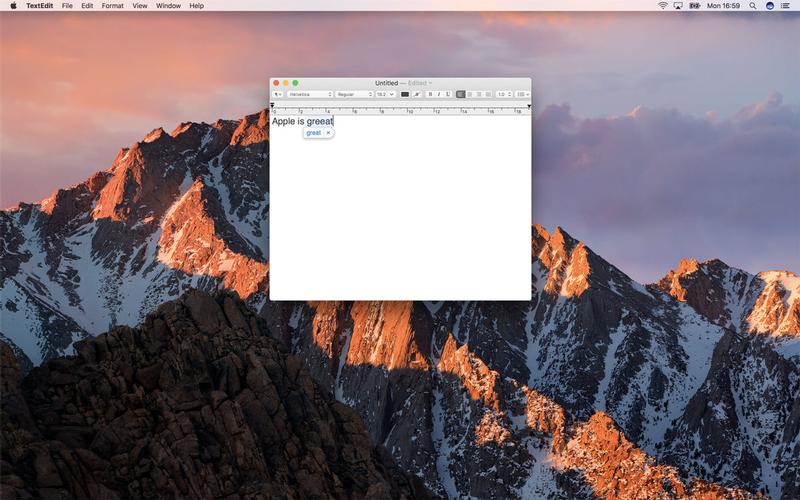 By default, macOS is set up to correct spellings – and, where possible, certain other characters. System-wide controls for this are in System Preferences > Keyboard > Text. Here, you define whether your Mac automatically corrects spellings, capitalises words, adds a period after a double space, and uses smart quotes and dashes.

Individual apps may override Apple’s system-wide settings and have their own controls; alternatively, you may have adjusted certain settings yourself on a per-app basis. In the latter case, you can in many apps check Edit > Spelling and Grammar and Edit > Substitutions to see what’s turned on at any point.

When you do mis-spell a word, macOS will offer an alternative next to the cursor. If you continue typing (such as by hitting space), it will be assumed you accept the correction. If you don’t want it, you can tap Escape. If the correction’s already happened, you can undo it by using Cmd+Z or Edit > Undo. 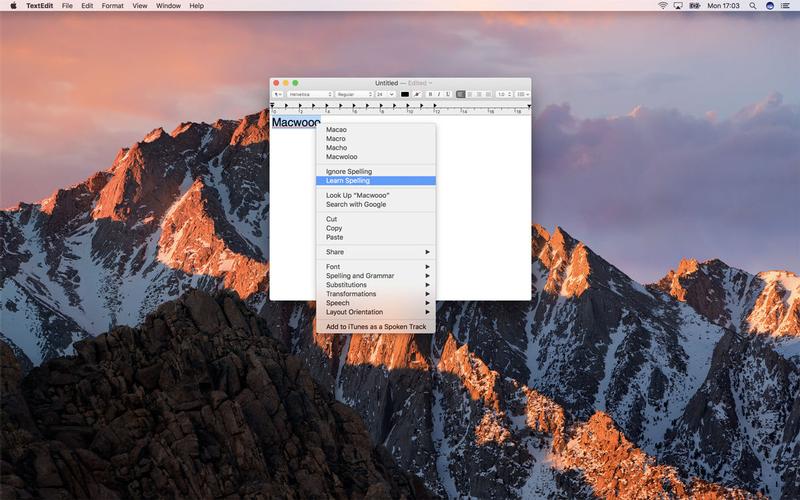 To reverse this, select Unlearn Spelling on a previously learned word. Alternatively, you can hold Option and click Go in Finder and then select Library. Find the Spelling folder and open LocalDictionary in TextEdit. If there are words you no longer want in there, delete them and save the file. 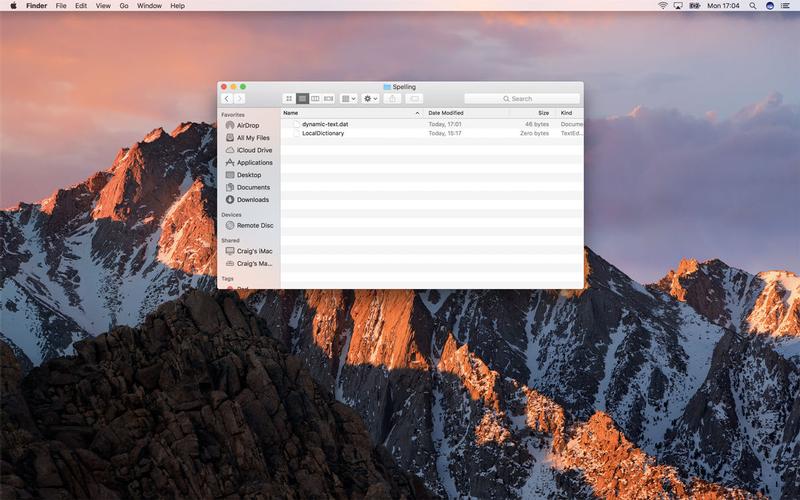 Autocorrect can also be ‘trained’ by escaping out of an autocorrect several times. Your Mac will eventually get the message and stop trying to make that correction. Again, you should be able to reverse this – in TextEdit, open dynamic-text.dat from the aforementioned Spelling folder. Delete the entries you don’t want. You’ll have to log out and log in for changes to take effect.

Like macOS, iOS defaults to correcting your spellings. The various options can be fine-tuned in Settings > General > Keyboard. The Predictive switch, note, heavily affects the nature of the autocorrect interface. 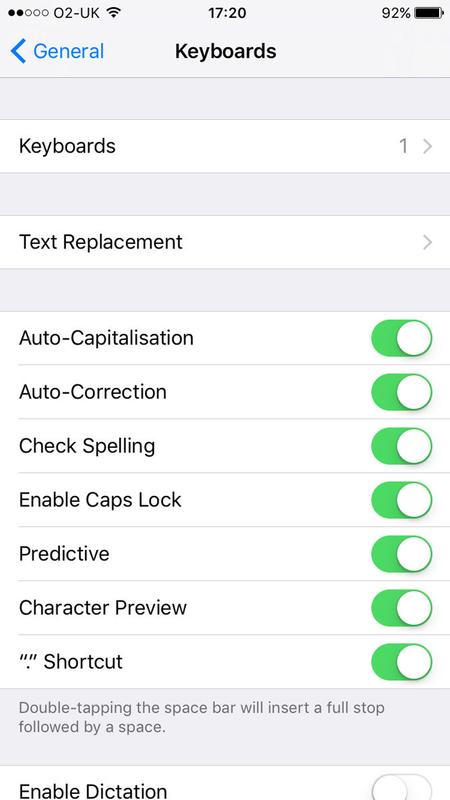 When Predictive is on and you start typing, iOS will attempt to predict your next word, placing options in a bar above the keyboard. When it believes a word needs correcting, it will be automatically highlighted, and the central word in the prediction bar will be chosen if you continue typing. If you want to retain your spelling, you’ll need to tap the quoted option to the left. 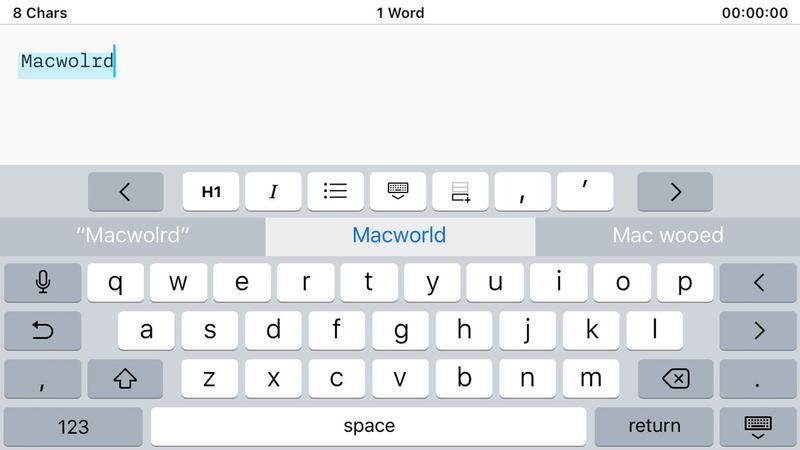 By contrast, if Predictive is turned off, the interface you get is essentially the same as on the Mac. The predictive bar is not displayed, and autocorrect suggestions appear next to the word, with a little tappable close box for when you want to cancel them.

Like on Mac, you can also ‘train’ autocorrect, by overruling it a bunch of times. But reverting words isn’t so easy – instead, you have to go for the brute force approach of deleting your entire custom dictionary in Settings > General > Reset > Reset Keyboard Dictionary. Naturally, this obliterates any customisations made up until that point.

As we’ve seen, from time to time iOS’s autocorrect tries to understand what you’re trying to type, fails, and changes it to something wrong. This is just one of those things, and you can train it to understand particular phrases in the short term, and hope the feature improves overall in the long. But there have been other situations where the error is harder to understand.

Following the rollout of iOS 11, for example, there have been numerous reports of hopelessly wrong autocorrect errors that one would have to describe as glitches, or bugs.

Early on, the lower-case i was often seen to autocorrect to a question mark in a box – but this has since been patched in iOS 11.1.1. But another glitch followed it, this time autocorrecting “it” to “I.T” and “is” to “I.S”, and at time of writing this has not been patched.

(It’s also not affecting everyone. We’ve seen the lower-case i glitch but not the I.T/I.S one.)

With autocorrect glitches, as opposed to straightforward mistakes, the most effective solution will be to let Apple know, and wait for an iOS patch. In the meantime you can try to set up a text replacement shortcut (replacing “it” with “it”, for example) but some affected users say even this doesn’t work.

On macOS and iOS alike, you can, as noted earlier, define custom text replacements. On Mac, you’ll find these in System Preferences > Keyboard > Text. 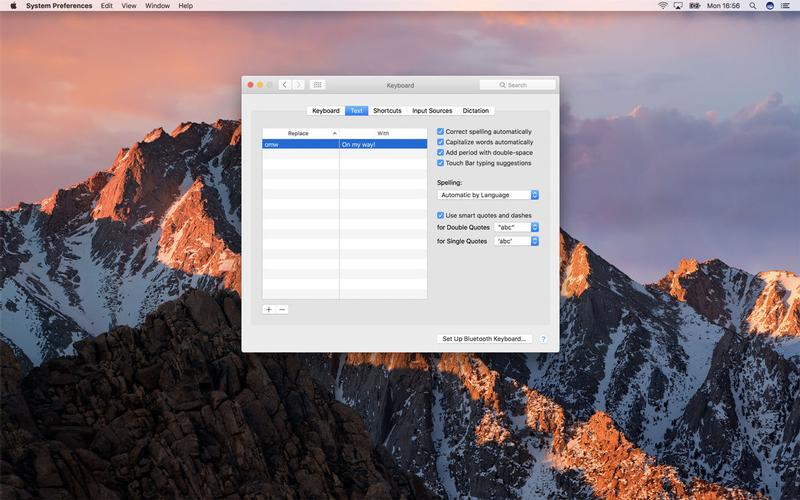 On iOS, they live in Settings > General > Keyboards > Text Replacement. If you’re using iCloud, edits made on one device will sync across any signed into the same account.

On Mac, you get a table with Replace and With columns. On iOS, each entry when selected offers Phrase and Shortcut text fields. Replace/Shortcut and With/Phrase are equivalents. What you’re essentially doing in either case is defining the text you wish to type, and what it should expand into.

Apple provides a handful of replacement entries to get you started, and you can add your own for fixing common typos, if autocorrect doesn’t catch them. For anything more complex – given that replacements can include ASCII and emoji characters – it makes sense to define a system.

Our recommendation is to use short descriptive phrases that end in two commas. For example, address,, could expand to your full address. Our reasoning is this system is simple to remember, you’re unlikely to normally type two commas in a row anywhere else, and commas are immediately accessible on the first ‘level’ of the keyboard on iPad, and also on iPhone in landscape.

Text replacement can also be used to force iOS to recognise swear words as legitimate, and stop autocorrecting them. 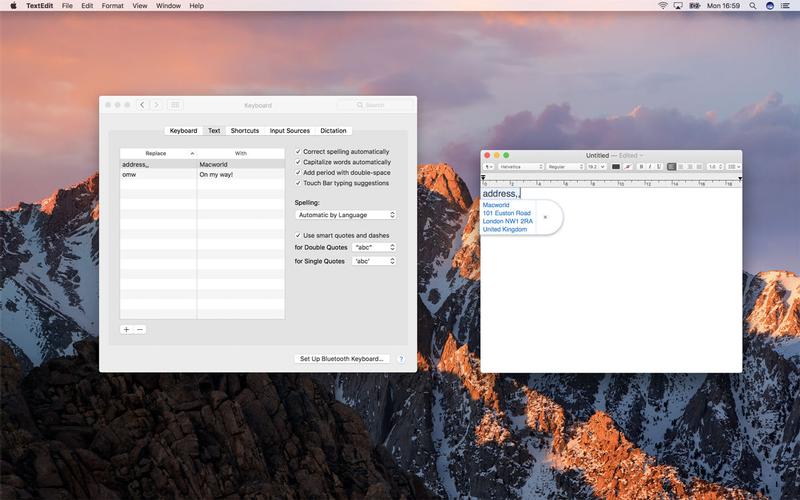 On Mac, you can take things further, by inputting multi-line expansions. Hold Option and tap Return for a carriage return when inside a With field. Alternatively, copy and paste multi-line text into the With field from TextEdit. Multi-line entries cannot be created on iOS, but they will sync across from the Mac.

Should you wish to take text replacement further, various utilities exist that offer advanced functionality, such as integrating imagery, working with variables, creating sets of snippets, and enabling you to position the cursor after a replacement has occurred.

Getting into specific apps is beyond the scope of this article, but it’s worth noting macOS is far more suited to such utilities than iOS, where they tend to require a third-party keyboard to offer the kind of functionality you’d expect (and even then it may not work consistently across all apps and in all circumstances).

Your best bet for iOS is probably TextExpander. TextExpander also exists on Mac, although is a subscription-based utility. Similar apps with one-off pricing include Typinator, TypeIt4Me, aText, and QuickKey. Keyboard Maestro also includes robust text replacement functionality along with a host of features for triggering actions on your Mac. 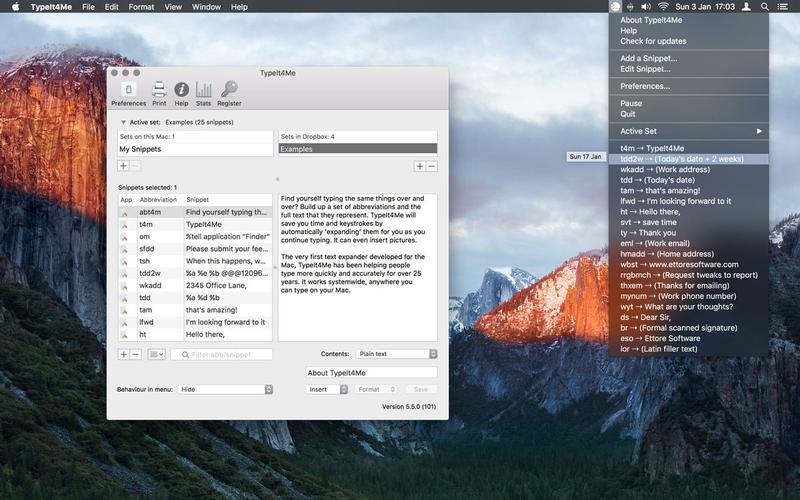