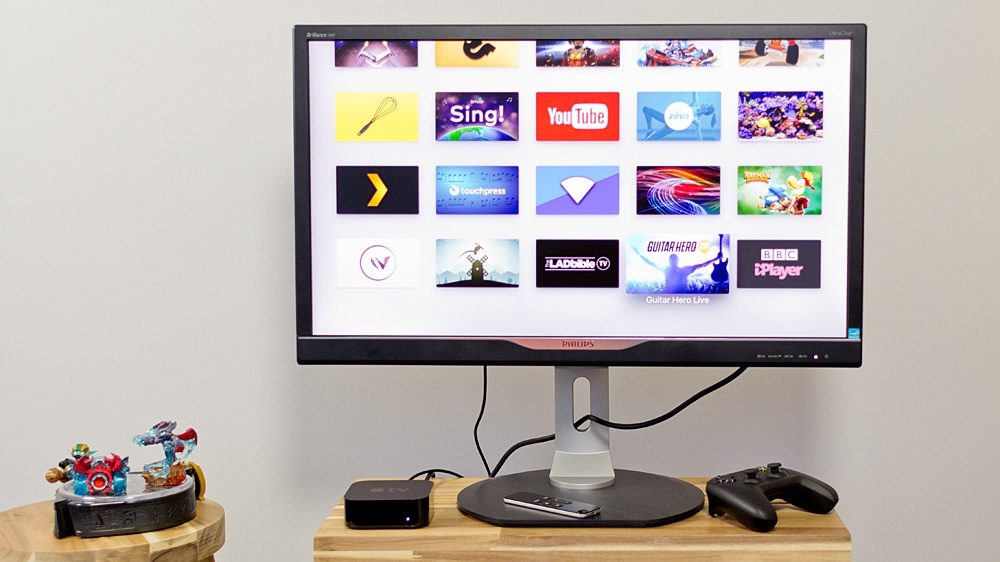 The Apple TV is a great media streamer, but the built-in storage is used exclusively for the operating system, apps and related media files – so how can you watch your videos on the Apple TV? While AirPlay is an easy way to stream videos from your iOS or macOS device to the Apple TV, VLC Player can handle just about any kind of video file you throw at it. Here, we explain how to watch any video on Apple TV.

How to watch any video on Apple TV: AirPlay

Of course, the easiest way for iOS and macOS owners to play videos on the Apple TV is to use AirPlay. As well as allowing you to play local files on your iOS device, AirPlay also lets you stream video from various websites and apps without any issue. In iOS 10, simply find the video you want to play and swipe up from the bottom of the home screen to access the Control Center. From there, swipe right to access the media control menu, tap the Output (usually labelled iPhone) and select Apple TV as the playback device.

Once you’ve selected the Apple TV as your output, simply play the video and after a few seconds, it should appear on the TV.

It’s slightly more complicated on macOS, and the experience isn’t always as good. Unless you have a QuickTime-compatible video file, you’re limited to mirroring your entire Mac display to your Apple TV. As it’s mirroring everything from your desktop, it doesn’t buffer video in the same way as on an iOS device and thus, users can experience lag and sync issues, especially with higher-quality videos.

If you do have a QuickTime-compatible video file, open it in QuickTime and select the AirPlay button on the media controls and select your Apple TV as the output.

How to watch any video on Apple TV: VLC Player

Of course, AirPlay isn’t always going to be the best way to play videos on the Apple TV – especially when you get into more specialist video files that aren’t supported on iOS. But don’t fret, as there’s another option available in the form of the VLC player app for Apple TV. VLC, the media player app available for several platforms, is famous for being able to handle just about any kind of media file that you can throw at it.

Got a weird MP4 file you can’t open? VLC will play it. MKV not supported by your media player? VLC supports it. You get the idea! The question is, how do you get your video files from your Mac to your Apple TV using VLC? Well, there’s three ways you can do it:

The first option is to use your Local Network to connect, and is the easiest way to play videos on your Apple TV from your Mac if they’re both on the same network. As pro users will already know, VLC supports Universal Plug and Play media servers (aka Plex) and FTP servers running on your local network, allowing you to easily browse your server-stored media library. However, not everybody has enough money to cough up for a NAS drive – what are they to do?

Thankfully, Plex offers a Mac app that essentially turns it into a UPnP media server and thus, makes your video library available via VLC on the Apple TV. Simply download Plex for Mac here, follow the on-screen instructions and point the app to the folder on your Mac where your video files are stored. Then, on the VLC app, select the “Local Network” tab and select your server. You should be taken through to a list of available movies, and they should then play without any issue.

Okay, so what if you’re not so keen on running a media server from your Mac? The second option is Remote Playback, and is a feature that is offered by VLC natively. Within the VLC app for Apple TV, navigate to the Remote Playback screen and make note of the two URLs you’re provided with. One will be in the form of a local IP address, while the other should be an easy-to-read URL.

Type either one of the URLs provided into your browser on your Mac and you’ll be presented with a web page that allows you to drag and drop videos into it to enable big-screen playback. Simply drag your chosen video onto the web page, give it a few seconds to transcode it and it should then start playing on your Apple TV.

The third option is the most complex, as it requires you to already have an FTP or web server on the internet with media files stored on it and is only recommended for pro users. If you know the URL of the video file you want to play on the Apple TV, simply head to the VLC app and select the Network Stream tab. Select Enter URL to Play and enter the address of the video file (this can be fairly long sometimes!), press OK and assuming you typed the URL in correctly, playback should begin.