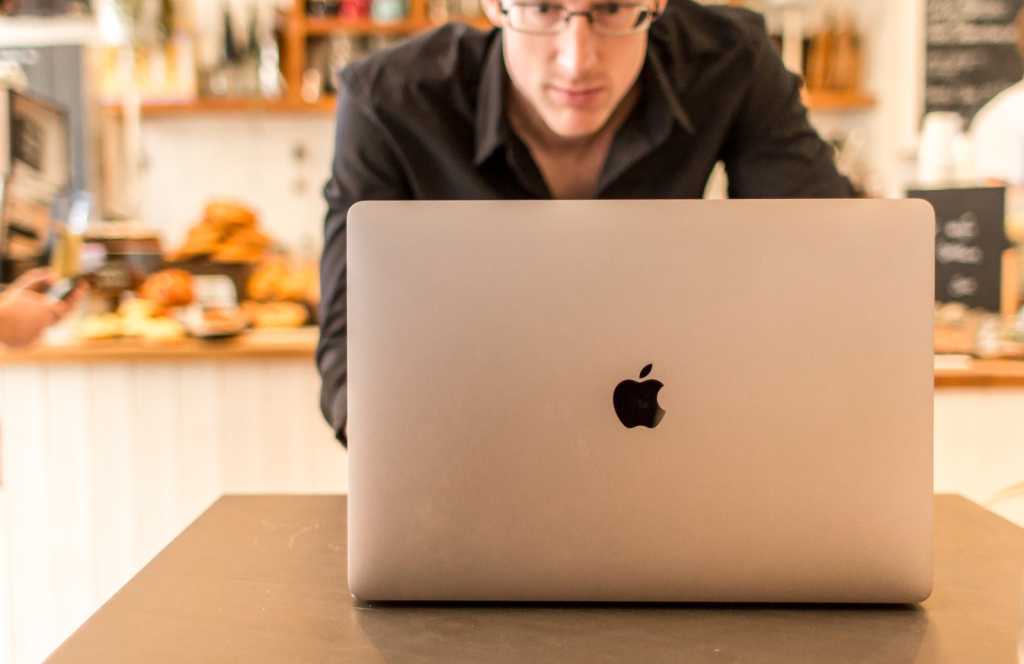 Are you thinking that your Mac performance isn’t as good as it once was? Wondering if there might be a problem with one of the components, or maybe thinking of adding more RAM, or updating the whole Mac. Or perhaps it’s your web connection that’s bothering you, but you aren’t sure what the issue is, is your broadband connection really poor, or is there something else going on with your Mac?

We share plenty of advice on how to update your Mac, and speeding up a slow Mac, but how do you tell if there is really a problem with your Mac rather than you just being inpatient with it. One way to get an idea of how well your Mac is working is to run benchmarks and a set of performance tests on your MacBook or Mac desktop.

There are a number of benchmarking apps that will help you find out how fast your Mac is, you can test your GPU and your CPU as well as your WiFi internet speed and even Ethernet speed. In this article we’ll run thought the best Mac performance test apps, including some free options you can find online.

Benchmarking your GPU could tell you how much of a boost you might get if you were to update the graphics card, perhaps by adding a eGPU to your Mac. Or, if you are thinking of buying a new Mac, running benchmarks on your current machine and then comparing them to our benchmarks of the newer models we’ve reviewed will give you an idea of the kind of boost you can expect. (Check our reviews section for the latest Mac benchmarks.)

Having run these tests before and after any update you might make you will be able to make a judgement on whether the update had the desired effect.

In this article we’ll recommend the variety of (usually free) apps we use to evaluate a Mac’s performance (and more specifically, the performance of its individual components) in a range of scenarios. Carry on reading to find out how to benchmark the CPU, GPU and hard drive, and more, of your Mac desktop or laptop.

How to run Mac speed tests

Want to find out how fast your Mac is (and confirm your belief that it’s been slowing down)? You can run various tests to find out your processor speed, which would give you an insight into how powerful your Mac is.

We’d also recommend checking the speed of your hard drive (or rather your SSD as not many Macs have a hard drive these days).

Before running any of the tests we run through below, we recommend closing any apps on your Mac as they might affect how well the machine performs. In fact, restarting to make sure that any RAM is freed up is also advisable.

Read on to find out which tests to use…

How to run CPU test Mac

To check your processor speed we recommend Geekbench 5 from Primate Labs, here’s how to use it:

Geekbench 5 (quite recently updated from Geekbench 4) is our go-to benchmark tool when reviewing the latest Macs, iPhones and iPads here at Macworld UK.

It’s the most popular tool for gaging how powerful the latest processors are, and because it works for Macs and PCs, as well as iOS and Android you can get a good idea of how your processor compares to another.

That could be useful if you think something is wrong with your Mac – you can compare the score to similar Macs and processors. You can view the Geekbench scores for various processors here.

The main draw of Geekbench 5 is that it’s incredibly easy to use and requires little technical knowledge. Simply open the app, close any other apps that might be running on your Mac, and click ‘Run CPU benchmark’.

It’ll then measure the performance of your CPU when performing “everyday tasks designed to simulate real-world applications” and can take up to 20 minutes to complete, depending on the speed of your CPU. 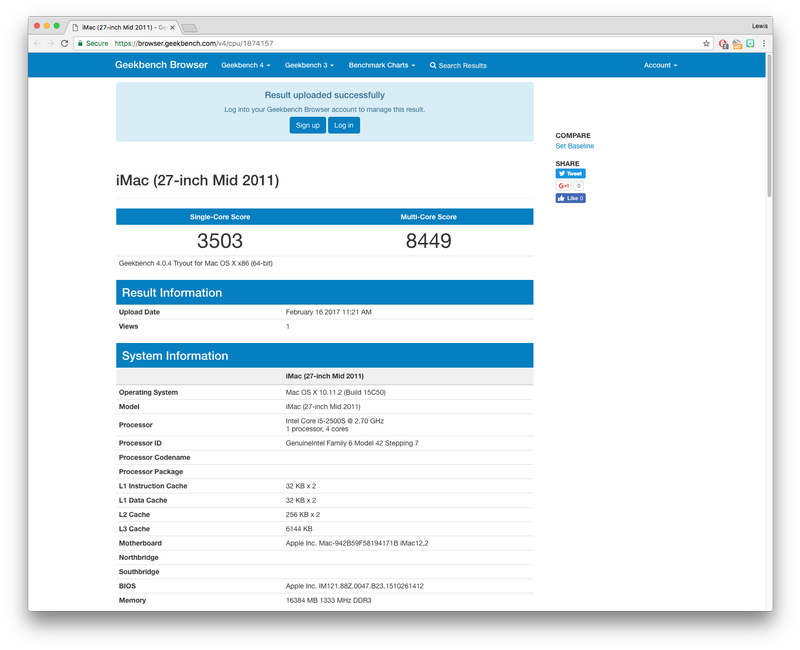 Once it’s done, the results will be displayed. You might initially be overwhelmed by all the information on offer, from the Processor ID to the Motherboard hardware, but the only two numbers you need to concentrate on are at the top: single-core score and multi-core score.

The single-core score helps give a sense of how fast the Mac performs under certain situations when only a single processing core is handling everything. Multi-core, on the other hand, shows you how well your Mac can perform when pushed to its absolute limits, as it’ll use multiple processing cores at once to handle the strain. Think of it as your Mac’s top-end performance.

You can take these results and compare them to other benchmark tests on the Geekbench Browser, allowing you to see how your Mac compares to the latest generation of Macs, and even its competitors from other manufacturers. It should give you an idea of how well your computer is performing at the moment, and whether the upgrade you’re considering is worth it in terms of raw processing power.

How to check Mac disk speed

One way we used to check how fast the storage inside our Mac was used to be to copy and paste a 4GB folder and then time how long it took to duplicate. That is no longer an effective measure because, since Apple introduced APFS (Apple File System) the folder is no longer duplicated, all you are really doing is creating an alias to the original file.

Therefore the only way to really make a judgement about the speed of the storage inside your Mac is to use a tool such as the BlackMagic Disk Speed Test, or the AJA System Test Lite (free from the Mac App Store here) to measure the read/write speeds of your hard drive or solid state drive.

The free BlackMagic Disk Speed Test (get it here) was designed for video editors to help determine whether their hard drives can handle large files, but it’s extremely easy to use.

Simply download and open the app, select your target drive if your Mac has more than one hard drive (this is done by clicking the gear cog) and click start to begin the benchmark. For improved accuracy, and as with all other benchmark tests, it’s best to make sure that no other apps are running at the same time. 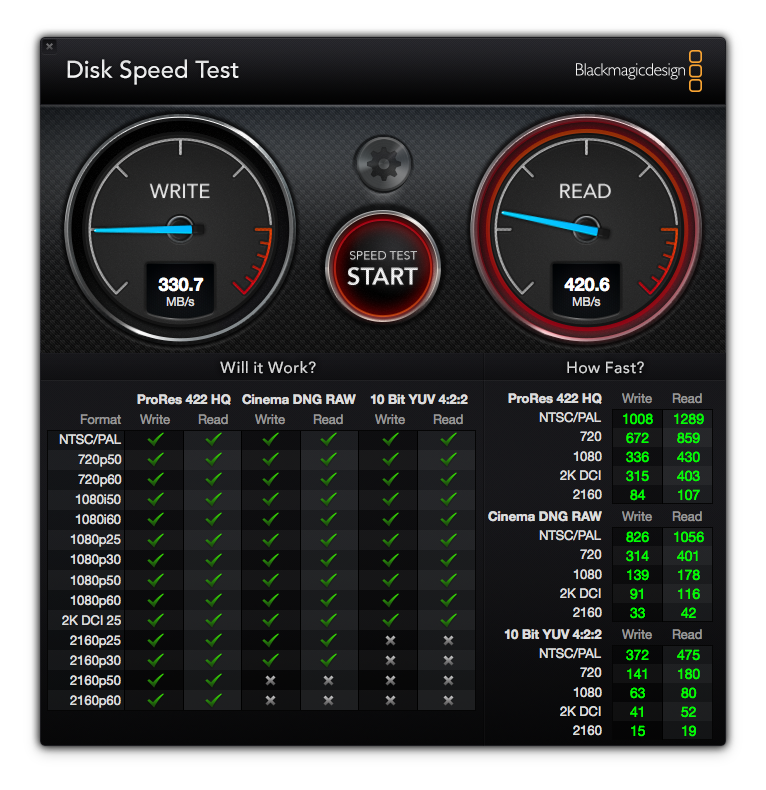 While there’s a bunch of data showcased in the Will it Work? and How Fast? charts, that’s mainly for video editors. The numbers you want to focus on are displayed in the big gauges at the top. The write speed is on the left and the read speed on the right, giving you an idea of how fast things will be written to the drive and how fast apps and files will load respectively.

How to check GPU performance on Mac

Finally, let’s talk about graphical performance. For this, we usually opt for Maxon’s Cinebench, another free piece of software that, in addition to testing your Mac’s CPU (much like Geekbench without the ability to compare with other results online), will use an OpenGL and Metal test to benchmark your graphics card.

We used to use Cinebench R15, but this has recently been updated to R20 (which is somewhat frustrating as it means our old results aren’t comparable now).

We also use Unigene Valley, download it here. Unigene Valley is a game-engine test. We use the “Extreme HD” preset for a quick and easy test. When it starts click on Benchmark.

Here’s how to use Cinebench R20.

There are a number of tests you can run to test your graphics card performance. One renders a 3D scene containing 2,000 objects with lights, reflections, shadows, and shaders. There are also tests for OpenGL and Metal (Apple’s hardware-accelerated 3D graphic programming interface). In those tests you’ll see 3D cars zooming around dimly-lit city streets, which will test your graphics card’s ability to handle nearly 1 million polygons at once.

After the tests have run you’ll see the frames per second (fps) result and a score, with the higher the result the better. You’ll see some of the best results following the test, but Maxon doesn’t have an easy to search database for different models like Geekbench does. 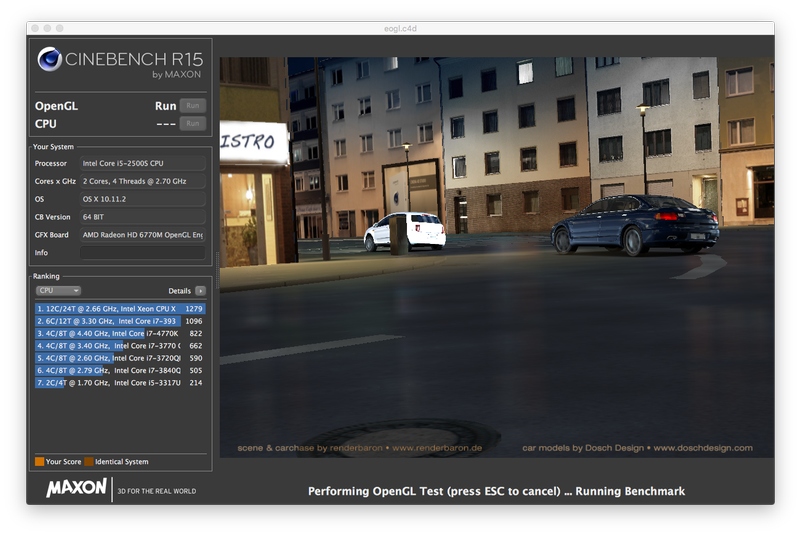 To perform the test, simply open Cinebench and click Run next to the OpenGL test in the top-lefthand corner of the app. It’ll take you through the test, and your final result will be displayed next to the Run button.

If you do end up looking for a new Mac, take a look at our Mac buying guide.

What are good benchmarks for a Mac

The Mac Pro when it launches in autumn 2019 is likely to have some very impressive benchmarks. In the meantime, these two high-specced Macs should give a good idea of what can be expected at the top end.