Apple has released a brand new social media-friendly video editing app for iOS called Clips, an app for iPhone and iPad that the firm claims it’s “incredibly easy” to create expressive videos on iOS using the app. But what makes Apple Clips different from the sea of video editing apps available for iOS, and how do you use it? Well…

Clips is a brand-new app for iPhone and iPad which allows users to “create expressive videos” according to Apple. Essentially, in a world where social media is full of viral videos, this gives users a quick and easy way to create shareable videos without much prior knowledge of video editing. It sits somewhere between the video generator baked into the Photos app in iOS 10 and iMovie for iOS, which is regarded as being a high-end video editing app (in terms of smartphone apps, anyway!).

The app allows users to combine videos, images and music into one seamless video ready to be shared not only via the likes of Facebook, Twitter and Instagram, but also via iMessage too.

How to download Apple Clips on iPhone and iPad

Following the initial announcement of Clips in March 2017, the app is  now available to download for iPhone and iPad users completely free of charge. The only requirement? The app was announced to be released alongside iOS 10.3 so yes, you guessed it, Clips can only be downloaded on iOS devices running iOS 10.3 or later.

Android and Windows Phone (if there are any left!) users are out of luck though, as the app is an iOS exclusive with no current plans to port Clips to other platforms.

Read next:  How to update iOS 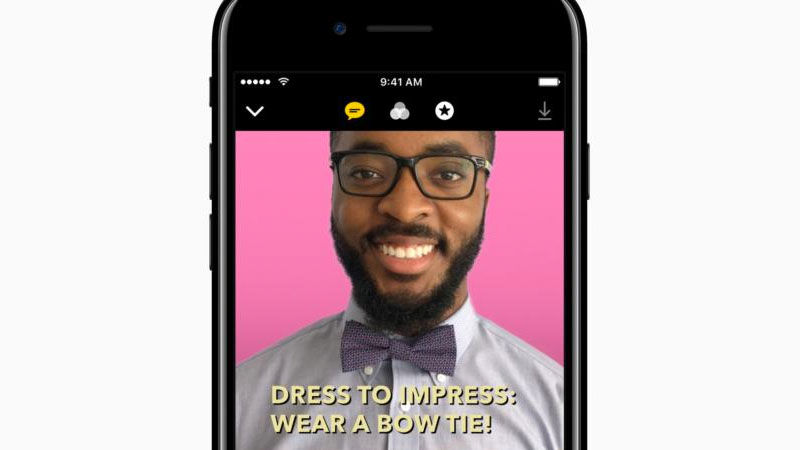 How to use Apple Clips

Clips sounds great, right? We’ve been using the app since its launch, and below we talk you through what Clips has to offer, along with a few helpful hints and tricks to get the most out of Apple’s new video editing app.

Clips offers a feature that others are yet to boast: Live Titles. Live titles allows users to create animated captions for their videos, simply by using their voice.

It’s dictated in real time with captions appearing in-time with your voice, although it only works with videos shot in-app and not imported videos. Users can add voiceovers with live titles to existing videos, but the app won’t automatically transcribe audio in the original video.

To enable live titles from within the Clips app, simply tap the speech bubble on the toolbar at the top of the screen. You’ll be faced with several options with varying sizes, positions and animations depending on the look you’re going for.

Once you’ve selected your live title template, hold down the red Record button and speak. The words should appear on-screen shortly after being spoken.

While the feature generally works well in quiet environments, it quickly falls over as noise levels increase, making it less than ideal for crowded environments.

Also, in a rather odd move, Apple doesn’t allow users to edit captions after recording. This means that if Siri misunderstands what you say, you’re stuck with incorrect captions on-screen unless you delete it and re-record it. We hope Apple fixes this in an update to the app, but we will have to wait and see. 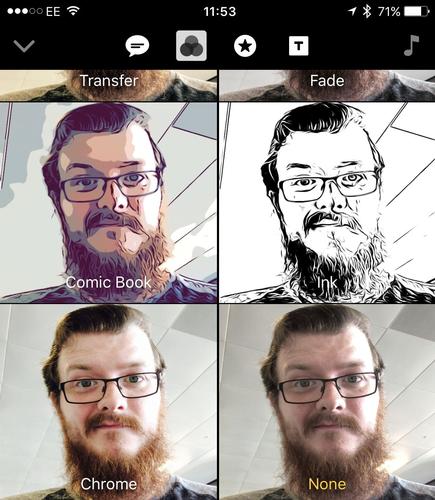 Browse a range of filters

Of course, no video editing app in 2017 would be complete without a range of photo and video filters to apply, helping to give your video a distinct look. Much like with Instagram and other apps, you can browse a range of filters by tapping the icon comprised of three circles (regular iOS users will recognise this from the Camera app) and tapping on the filter you’d like to apply.

Apple offers seven filters within Clips, including a Comic Book-style filter and an ink-effect filter, although the filters aren’t that different to what is available in similar apps. There’s nothing in the way of augmented reality filters either, so it looks like Snapchat is still the overall winner in this category.

Read next:  How to use Snapchat on Mac

Get creative with graphics and titles

As with Snapchat Stories (and Facebook Stories, and Instagram Stories, and Messenger Day and so on…), Apple offers users the ability to drag and drop a selection of graphics on-screen to help depict what is happening, including location- and time-specific graphics.

You can browse the selection by tapping the Star icon on the top of the display, then tap on the graphic you’d like to use. The graphic should then appear on the video, ready to be repositioned and deleted if need be. 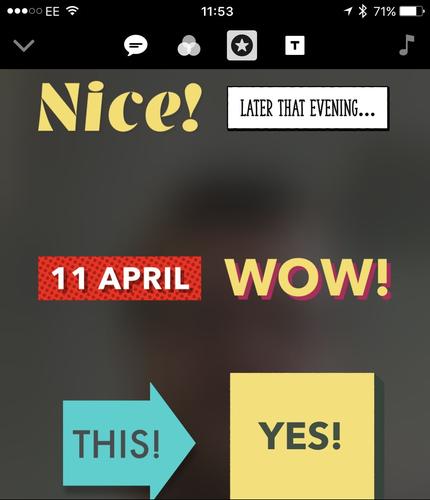 Along with graphics, users can also browse a (small) range of title sequences to add to videos. These range from step-based sequences to birthday sequences and more, and can be edited to reflect the topic of the video.

Simply tap the T icon on the top of the page, tap the sequence you’d like to use/edit, tap the text to edit if need be then ‘record’ the title sequence by tapping and holding the record button beneath. It’s an odd way of adding title sequences to videos, but hey, Apple must have its reasons.

Add music to your video

Along with effects, Apple also allows users to include music in edited videos too. The company provides a range of generic soundtracks that can be added to videos, along with the ability to browse your personal music library for something a little more… appropriate.

Sadly, this is limited to your local music library and doesn’t offer support from the likes of Spotify. In fact, not even Apple Music subscribers can use songs from the streaming service in their mini masterpieces. 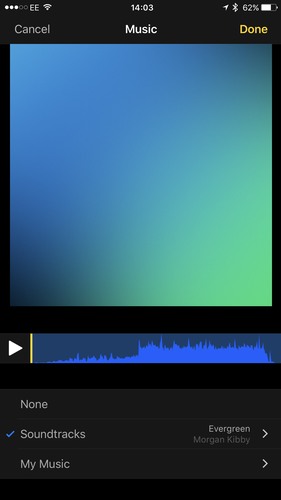 To access the music menu, simply tap the music note icon in the top-right of the screen. You can then browse from the provided soundtracks, or from your personal library. Don’t worry about levels either – the app will automatically adjust audio levels so that any voiceovers or in-video audio can still be heard.

To play back your movie in its entirety, simply tap the Play icon in the bottom-right of the screen. If you notice that a title sequence or a video clip is in the wrong place, simply tap and hold the specific clip at the bottom of the screen, and drag it to where you want it to be moved to. You can also tap on a clip to trim the length, mute the audio or delete it if it’s no longer needed.

When it comes to sharing the video, the standard options are there: Save the video to your camera roll, or export to Facebook, Instagram and Twitter, but there’s more. Clips can recognise who is featured in the video, and can suggest contacts based on that information to share it with via iMessage. 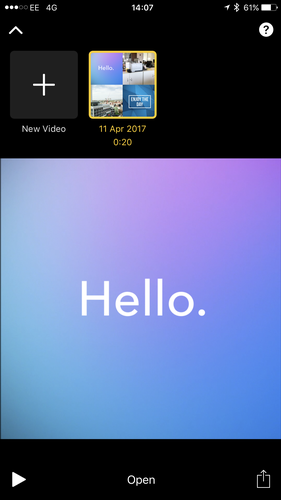 To save your finished masterpiece, simply tap the arrow in the top-left hand corner to minimise the project and take you back to the main menu. Make sure the project is highlighted, then tap the Share icon in the bottom-left of the display to share it with friends.

Read next:  Clips vs Snapchat