tvOS: it’s the Apple TV’s equivalent of iOS on the iPhone or macOS on the Mac. It manages the apps you can install on the device and offers various features of its own, including Siri and an all-new Dark Mode. Read on for tvOS 10 features, how to get it now, and the latest news on tvOS 10 beta updates.

The fourth-generation Apple TV is the only Apple TV that can currently be updated to tvOS 10.  Apple cannot extend support back to previous generations: they’re simply not equipped to run apps and a full iOS-esque OS, which means that Apple TV gen 1, 2 and 3 users are out of luck.

How to update your Apple TV to tvOS 10

tvOS 10 is a free update that, as we explained above, will work with all fourth-gen Apple TV models. Updating your Apple TV to tvOS 10 is easy.

Head to the Settings app, then select System and go to the Maintenance submenu. Click ‘Software updates’, then ‘Update Software’. Once the installation file has been downloaded, you’ll see an update prompt; select the option ‘Download and Install’. When the update is finished, the Apple TV will restart.

If you’d like to read about the process in more depth, take a look at How to update Apple TV software.

Apple recently released the third beta for tvOS, tvOS 10.2.1 beta 3 (14W5578b), to developers. As is usual with beta releases, there are no release notes to go alongside it but early users suggest there are no major changes to the software. This leads us to believe that tvOS 10.2.1 will be a behind-the-scenes update that squashes bugs and makes the operating system more responsive.

However, unlike with public iOS betas, installing a tvOS beta onto the fourth-generation Apple TV is quite a long-winded process requiring you to plug your Apple TV into your Mac to do so. Due to this, Apple made the decision to make tvOS betas developer-only, meaning the rest of us will have to wait until tvOS 10.2.1 is released later this year to install it on our Apple TVs.

tvOS got a fair bit of love at WWDC 2016 during Apple’s keynote for press and developers, though only saw a brief mention at WWDC 2017 with a single feature announcement.

But what’s new from Apple? Here are the new features available for your (fourth-gen) Apple TV.

The sole announcement for tvOS at WWDC 2017 was a simple one: Amazon Prime Video support is coming to the TV app at some point later in 2017, letting people watch the entire Amazon film and TV library from their Apple TV – or within the TV app on an iPad or iPhone.

Siri has some big improvements in the new update. It can now search your Apple TV’s movie and TV database with more complex and more natural-language-based queries. The example Apple gave was “high-school comedies from the 80s” – although it should be pointed out that this didn’t work perfectly in the demo. 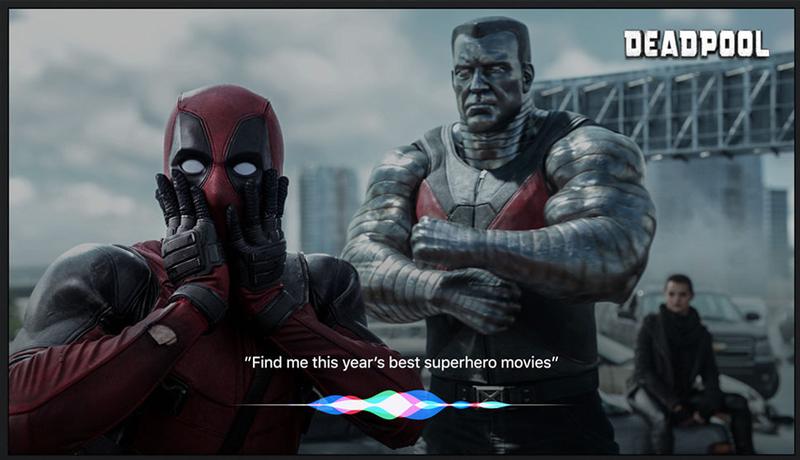 Siri can also search YouTube, too, and any live streaming channels can be launched by saying “watch” and then whatever the channel is. ESPN, for example. And it can be used to control HomeKit-compatible smart-home appliances, with phrases such as “set thermostat to 72”.

Dark Mode for Apple TV went down rather well. You can activate it to turn the background black instead of the bright white we’re used to. Good for those situations when you’re settling down with your popcorn to watch a movie in a dark room. 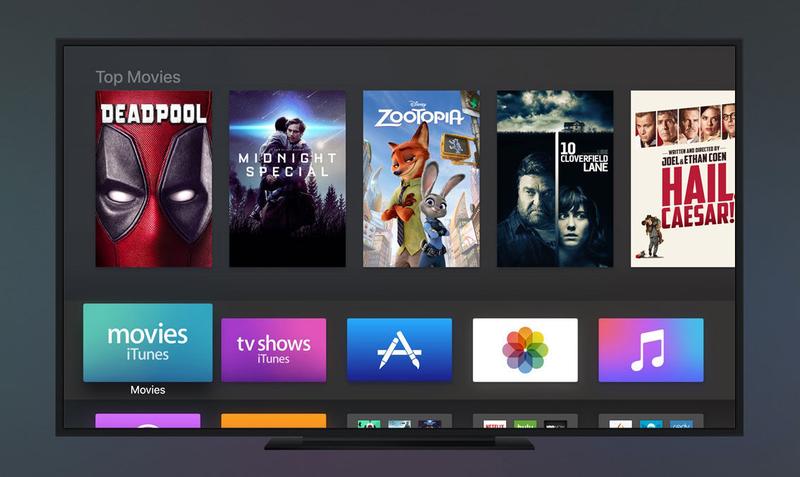 If you’re wondering about the Dark Mode we were expecting in iOS 10, fear not: we’re fairly sure that’s on its way soon.

Another bit of big news is the redesigned Apple TV remote app, which brings all of the Siri remote features to the app. It can be used for Siri queries using the built-in mic, but you can also input text thanks to the keyboard. 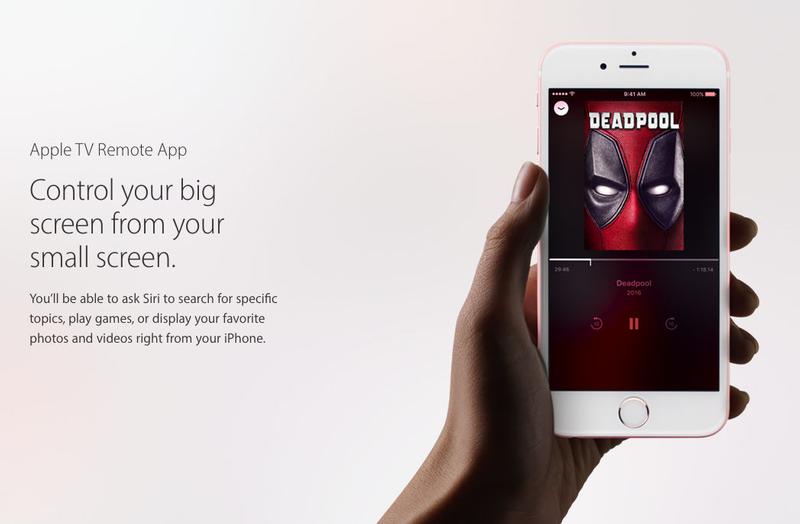 That’s not all either, as Apple also claimed that the Remote app would use the iPhone’s built-in sensors to be used as a gamepad, allowing users to play two-player games without having to fork out for another Siri remote.

Single Sign-on lets you sign in once to authenticate all apps, and any Apple TV-compatible app you download on iOS will automatically show up on your Apple TV.

This feature is more useful than it looks, as it allows a quick access to your apps, without having to download them on your Apple TV. We see this as one of the major steps forward in the newer revision of tvOS.

Like iOS 10 and macOS Sierra, tvOS brings the new features of Photos to the Apple TV. The most appealing of these is Memories.

Memories is designed to build digital albums for you automatically. It will recognise faces and places, and combine this data with the time and location where images and videos were taken to combine them intelligently into themed groupings – even selecting the best bits of video clips to use. Apple promises that these albums will be easily customisable (you can pick a different preset ‘tone’, for instance, and the accompanying music will change) and they looked decent in the (obviously pre-prepared) demo version, but we’ll need to test its performance in everyday use. 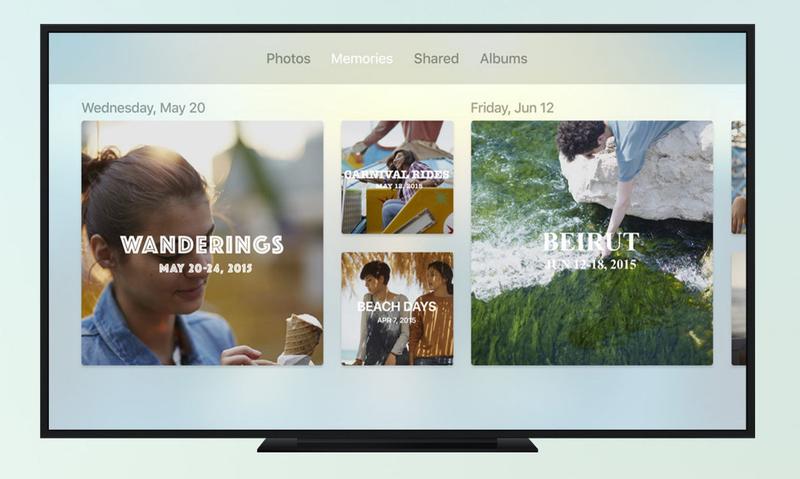 Like Photos, Apple Music has had a revamp, and this affects the Apple TV just as it does the iPhone, iPad and Mac. This means you can enjoy the cleaner, simpler new look of Apple Music in tvOS. (And presumably the new onscreen lyrics feature? Logically that ought to be part of the package, but Apple hasn’t specifically told us that tvOS will get this feature.)

This is a small thing, but if you download a Universal app to your iPhone it will automatically be installed on your Apple TV. We assume this feature will be optional.

One thing Apple didn’t mention, but has since come to light in Apple support documents, is that the requirement for Siri Remote compatibility for Apple TV games has been removed. That means they can focus on MFi game controllers, which are much more game-friendly than the Siri remote and provide a more comfortable and enjoyable gaming experience on the Apple TV. Read more: Best Apple TV game controllers

In fact, TV is an app for the iPad and iPhone too, and thus a potentially valuable unifying tool for syncing the content you play on multiple devices: watch part of a TV show on your iPad, say, and then open it on the Apple TV and it should pick up at the exact point where you left off. It’s designed to provide what Apple calls “a unified experience for discovering and accessing TV shows and movies from multiple apps on Apple TV, iPhone and iPad”.

TV is a bit like an electronic programme guide, and the place from which most activities naturally begin: the presenter said it was the first app she opened up each time she switched on the Apple TV, and a member of the Macworld team immediately reacted by wondering why the features of the TV app isn’t just baked into the Apple TV’s natural interface.

You can access TV shows and movies from the TV app, but Apple is also trying to use the TV app to replicate the discovery elements from Apple Music.

Here are the main features of the TV app:

“Using apps on Apple TV, iPhone and iPad has become the primary way for so many of us to watch television,” said Eddy Cue, Apple’s senior vice president of Internet Software and Services. “The TV app shows you what to watch next and easily discover TV shows and movies from many apps in a single place.”

As mentioned above, at WWDC 2017 Apple announced that Amazon Prime Video support would be coming to the TV app later in 2017, expanding the selection of content available to watch.

The TV app became available in December 2016 as part of the point upgrade tvOS 10.1, but for US owners only.

The UK Tech Weekly Podcast comes out every Friday. Follow the team on Twitter to get notifications of new episodes.

Our colleagues at Macworld US have put together a post-conference wrapup show, in which they discuss tvOS and a host of other announcements from WWDC 2016. Take a look.