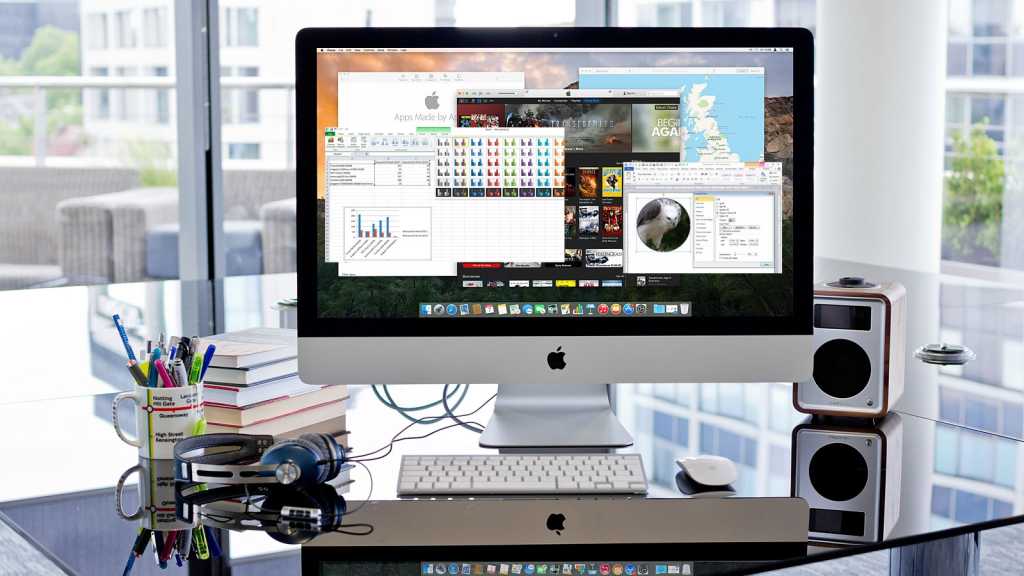 If you need to run Windows apps on a Mac, virtualisation ( running Windows on your Mac using a tool such as Parallels or VMWare) isn’t the only option. There’s another method that has the following benefits:

Sound good? The trick is to use the open source Wine app or, more precisely, to use the commercial offspring from that project: Crossover Office.

Note: Windows will not currently run on the new Apple Silicon Macs. Read more here: Will Windows run on Apple Silicon and Windows on the Mac is dead (probably) but it doesn’t matter.

The difference between Wine and Crossover is that the latter has ready-made profiles for popular Windows software, and this makes installing and using the apps a breeze compared to the more hands-on experience of using Wine, which requires specialist knowledge. 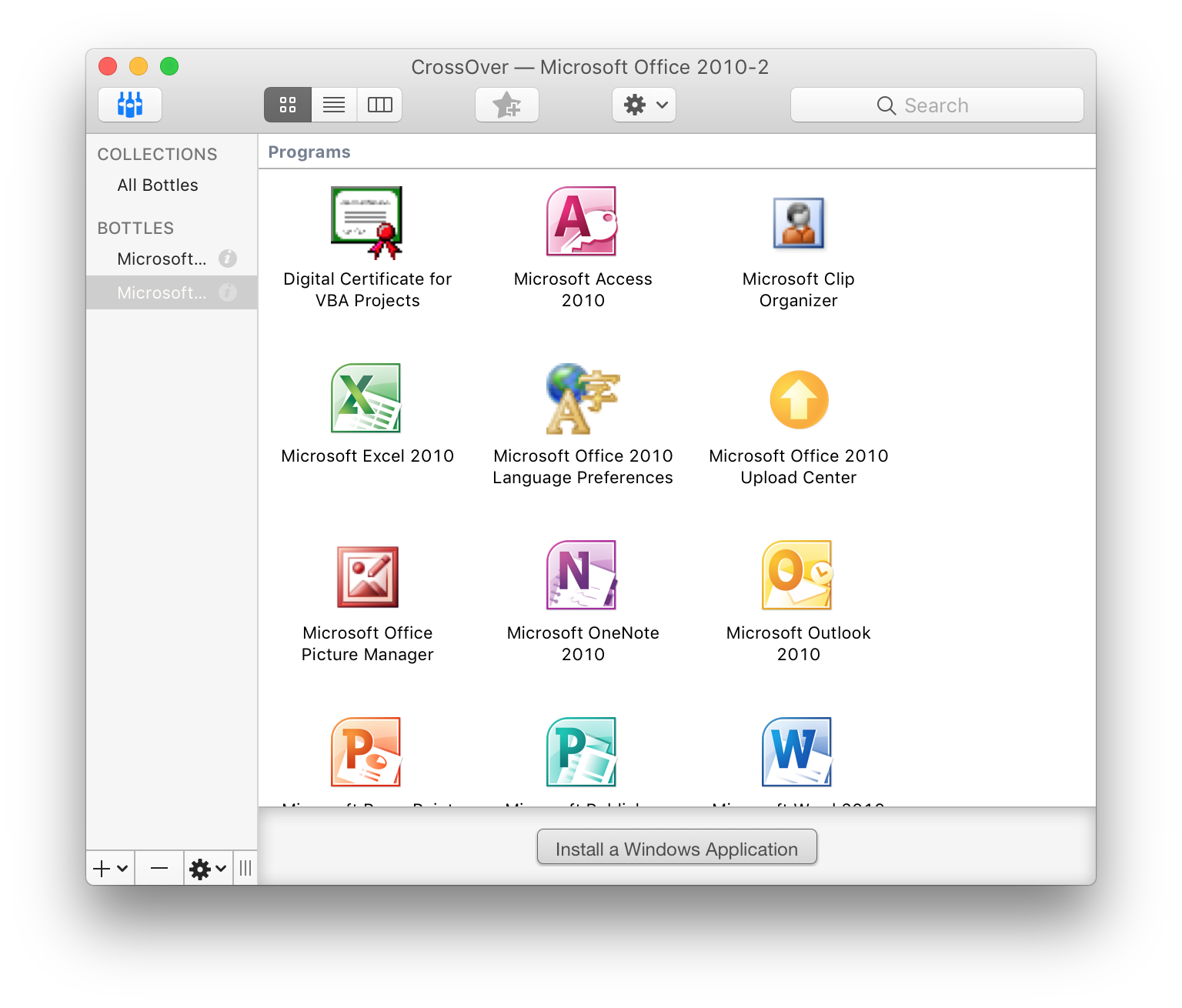 While Wine is entirely free of charge, Crossover Office is commercial software and costs £48 for a year’s subscription (perhaps more palatably expressed as £4 per month, although the £48 must be paid as a one-off payment). Unsurprisingly, Crossover Office sees a lot of use in businesses, where Crossover Office lets Mac users access apps their PC-using colleagues rely upon, such as Microsoft Visio or the Quicken accounting software.

However, a 14-day trial version is available so you can test Crossover Office with your favourite Windows software to see how effective it is.

The second issue to consider is that Crossover Office works best with older versions of software. For example, if you want to use Crossover Office to install the Windows version of Microsoft Office, you’ll get the most seamless and trouble-free results by installing Office 2010. The newer Office 2013 will work but there’ll be a few bugs and glitches here and there.

The very latest office release – Office 2016 – doesn’t work at the time of writing, so is best avoided, although we’re told that support is being added in a release of Crossover Office due late Summer 2017.

The Wine project is always playing catch-up with the main Windows developers because they can only implement new features once they’ve actually appeared in Windows! This is why support for new software is often a little shaky, at best.

It’s also worth mentioning that the Windows apps don’t always look pretty because, understandably, they’re really designed for Windows. Crossover Office doesn’t recreate the Windows 10 look and feel, and instead uses the Windows 9x GUI. In other words, it’s all plain, old-fashioned windows and buttons. However, if the main functionality is present within the app then this can surely be ignored.

The basics of Crossover Office

The key to installing Windows software using Crossover Office is understanding what a bottle is, because upon installing anything you’ll be asked to create one. It’s actually very simple – a bottle is just a fake C: drive, just like you might find on an actual PC, complete with all the folders you might find there such as C:windows, or C:Users.

Crucially, however, it also includes the correct system components that allow that Windows apps to run. Normally when you install a Windows app using Crossover Office you’ll install it into a fresh bottle of its own, which is isolated from the rest of the system, although existing bottles can be used more than once.

Because there are many different versions of Windows – from Windows XP up to Windows 10 – there are readymade bottles to match each. You might choose to create a Windows 8 bottle in order install an app, for example.

However, the rule about older software being better supported applies here too. If the app you want to install runs on all versions of Windows from Vista up until Windows 10, then creating a Vista bottle will very likely provide the best possible experience. 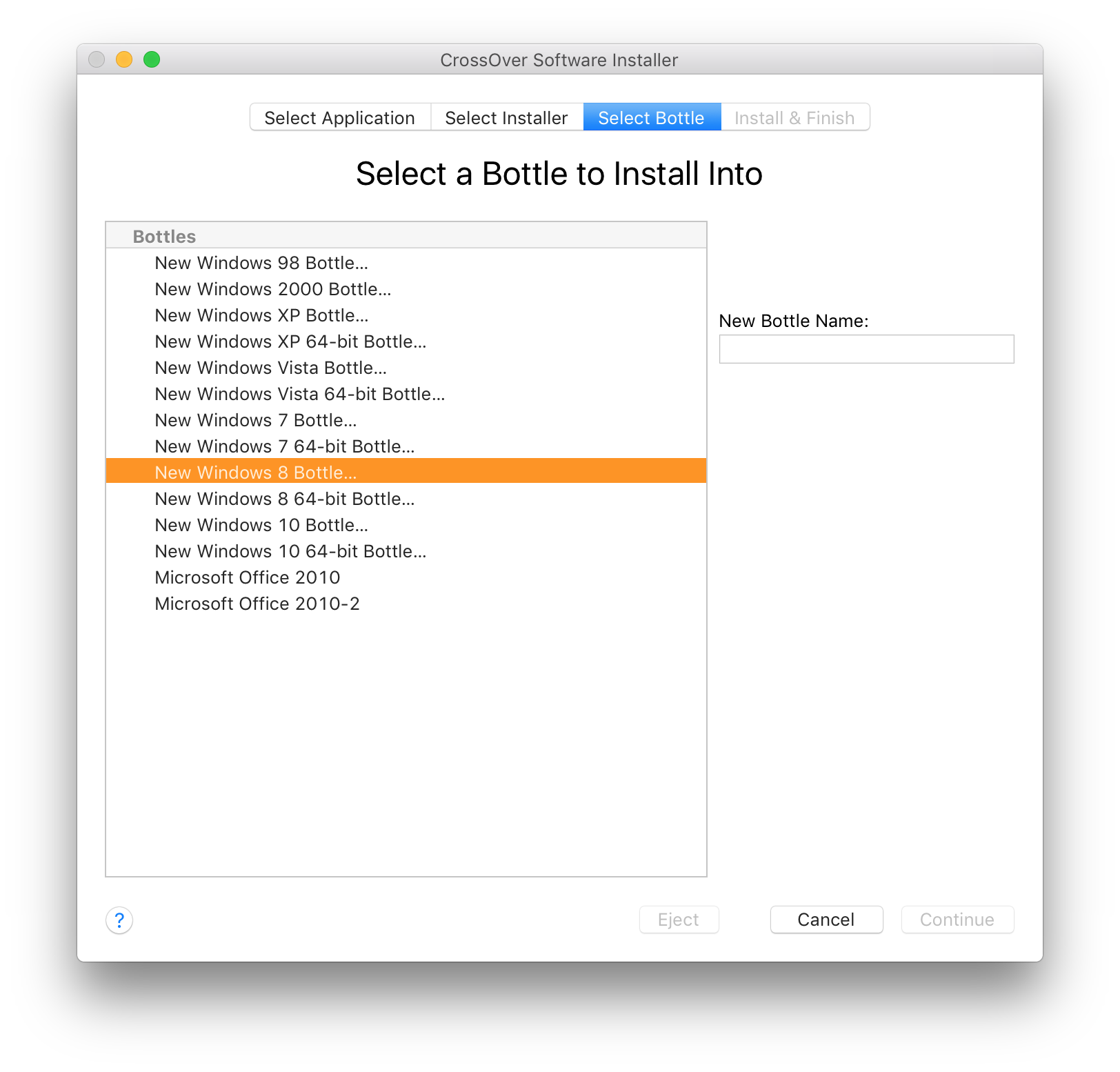 How to install Windows apps on a Mac using Crossover Office 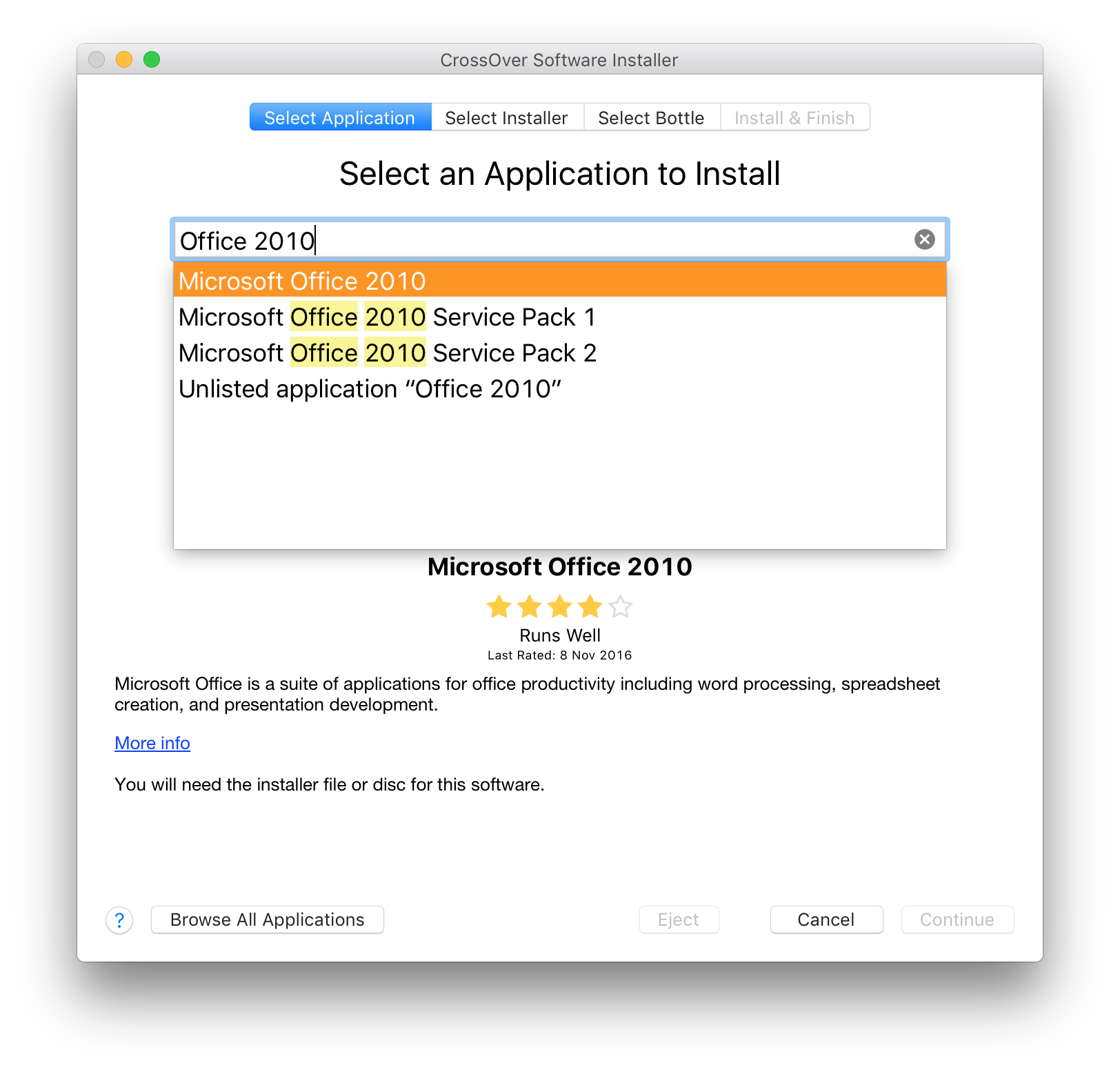 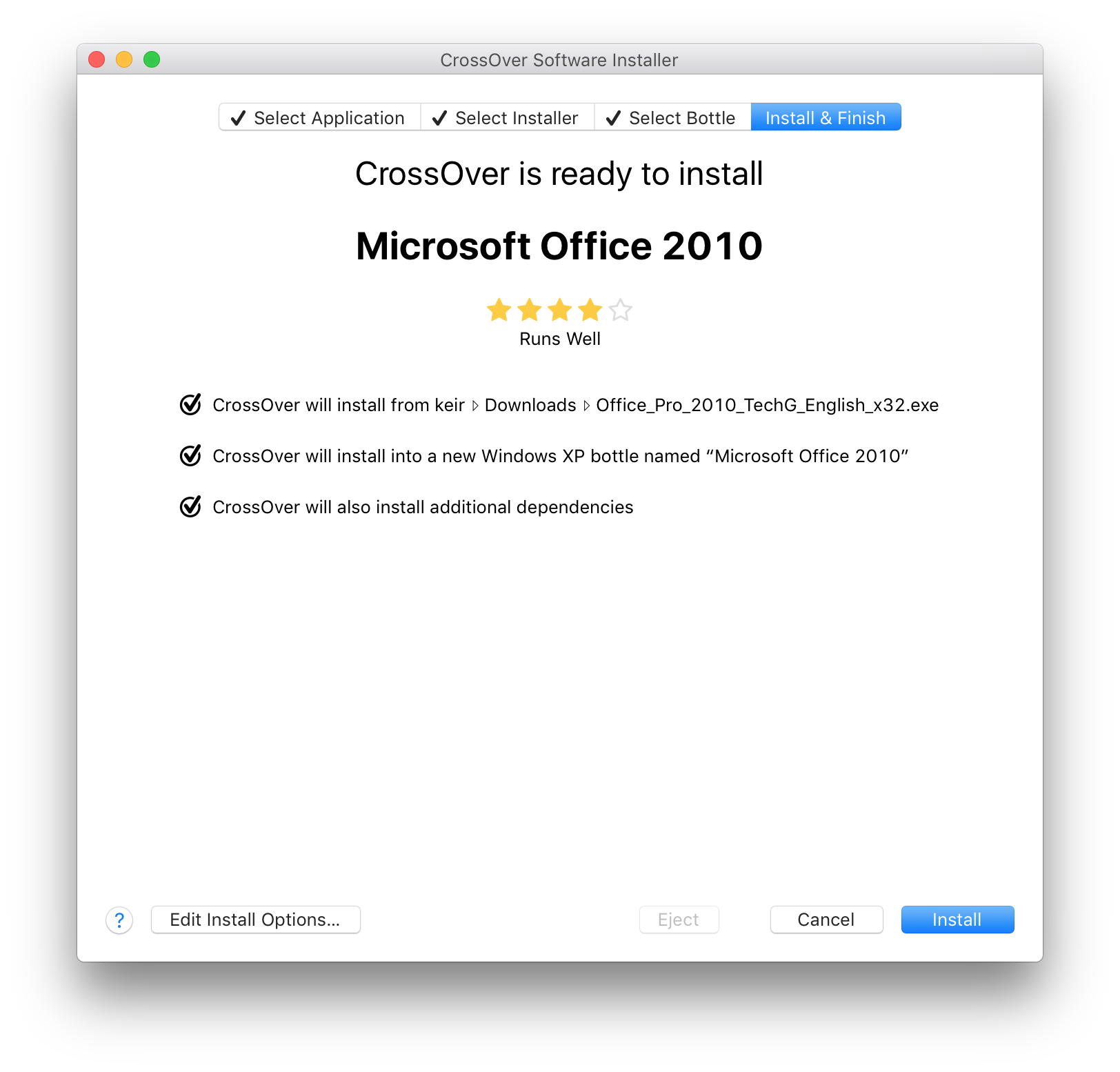 How to install “unlisted” Windows software on a Mac

The sheer volume of Windows software out there – literally numbering into the millions – means that Crossover Office can’t know the requirements of all Windows apps.

Note that support for unlisted apps isn’t guaranteed, and you might find some work better than others. All you can do is experiment. 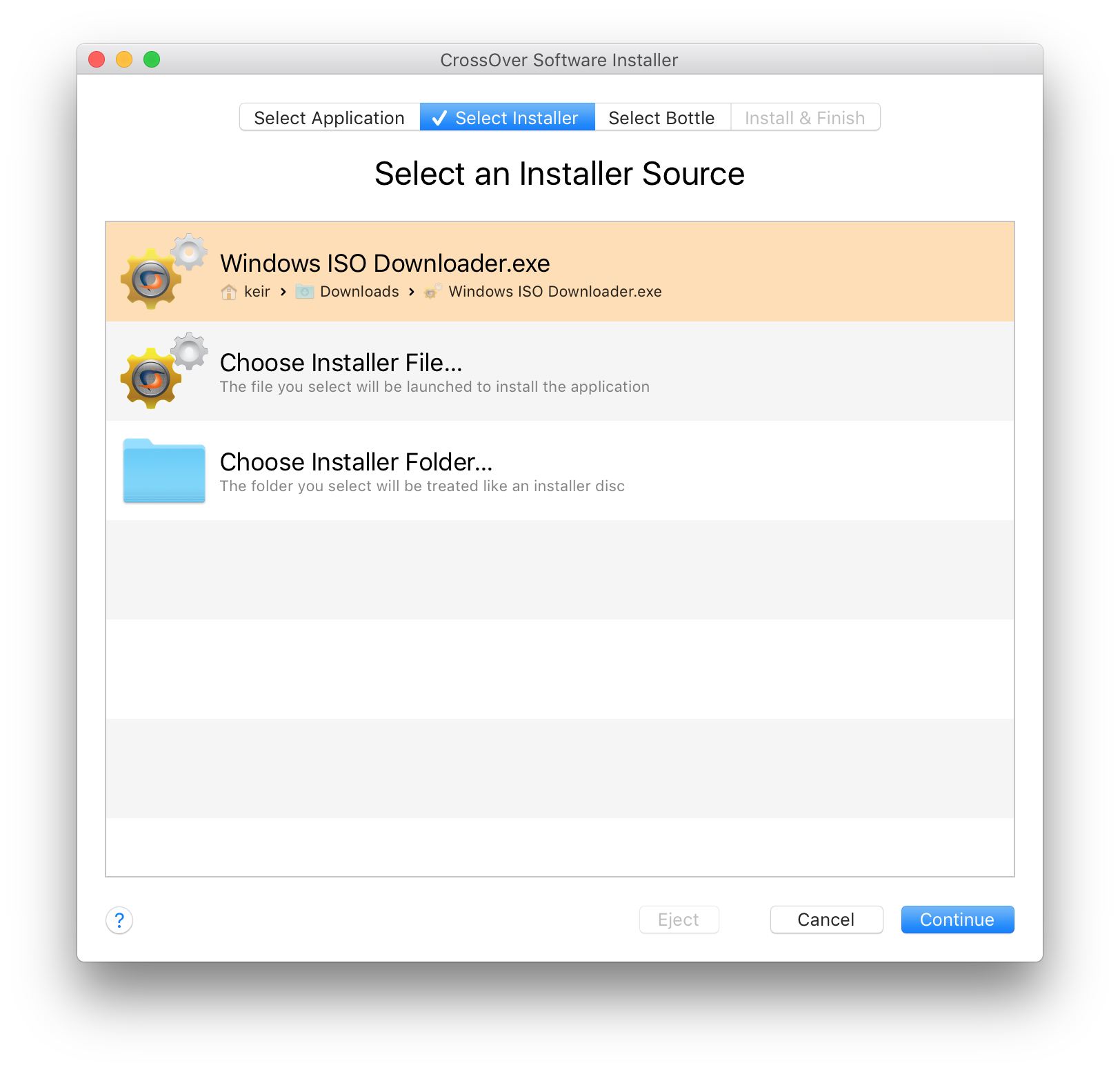 Running Windows software on a Mac

It’s possible to drag one of these icons from the Crossover Office window and into the Applications list of Finder, or even onto the desktop. Clicking this shortcut in future will start the app even if Crossover Office isn’t already running.

Note how the menu for the Windows app appears in the application window, and not at the top of the Mac desktop, as with native Mac apps. This is simply the way Crossover Office and Wine handles menus for Windows apps. To quit the app, however, you can select the Quit option from the Mac application menu, as with any other Mac app.

If you find the app you installed isn’t shown in Crossover Office’s main window follow these steps:

Note that you can also select the Save Command As A Launcher button to create a permanent shortcut to this app within Crossover Office. This can then be dragged out into the main Applications list within Finder, as with any other Crossover Office icon, as discussed earlier. 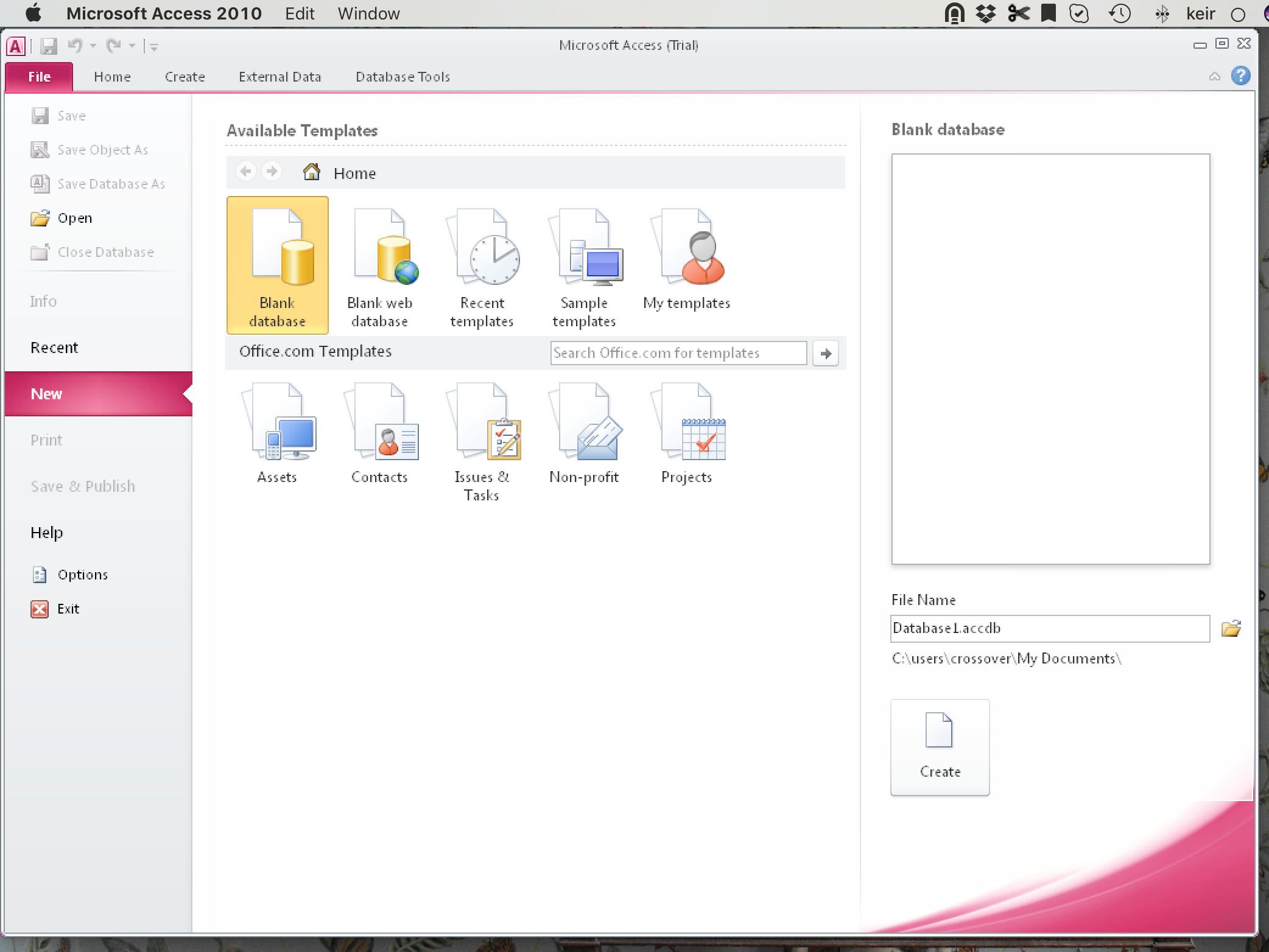