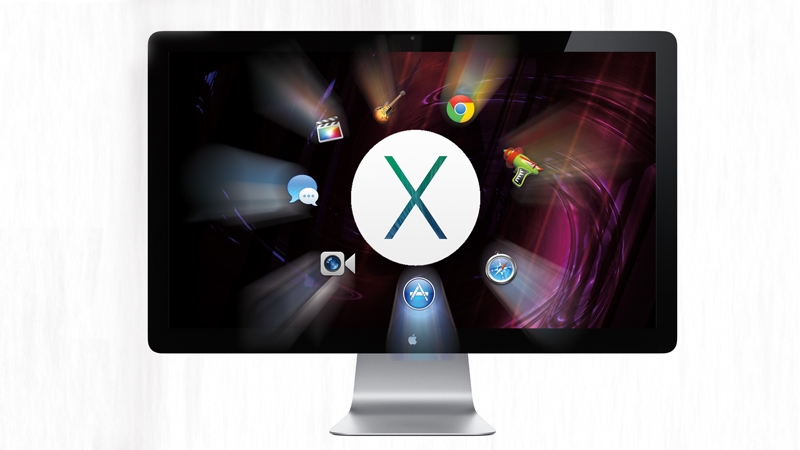 With the rise of Mac malware it’s never been more important to ensure all your Mac apps are up-to-date and, therefore, as free as possible of potential security holes.

The good news is that most apps have built-in update routines. The bad news is that they usually only work once the app is started. Starting-up and then quitting each and every app to update your system is pretty impractical.

There are some ways to mitigate the agony, though.

(If you were wondering how to get the latest version of macOS, the Mac operating system read this article: How to update a Mac with the latest macOS software)

1. Use the App Store

The Mac App Store provides macOS’ built-in updater. It can be set to periodically check for newer software in the background. While its main function is to keep the operating system and Apple’s various apps up-to-date, it will also automatically and invisibly keep up-to-date any apps that you’ve bought (or downloaded for free) through the App Store.

Therefore, the moral of the story is simple: Given a choice of buying or downloading an app from the developer’s website, or through the App Store, then the App Store makes a lot more sense because of this automated updating system.

In fact, if you’ve already bought an app independently, and spot that it’s also available through the App Store, then you might even drop the developer a line to ask if they’ll give you a free code so you can switch to the App Store version. All you need do then is start the App Store and click the Redeem link under the Quick Links heading at the right. I’ve done this a few times and it’s worked each time!

It’s a good idea to tick the other boxes listed there too, in our opinion, so that you’ll ensure system updates are applied automatically too. 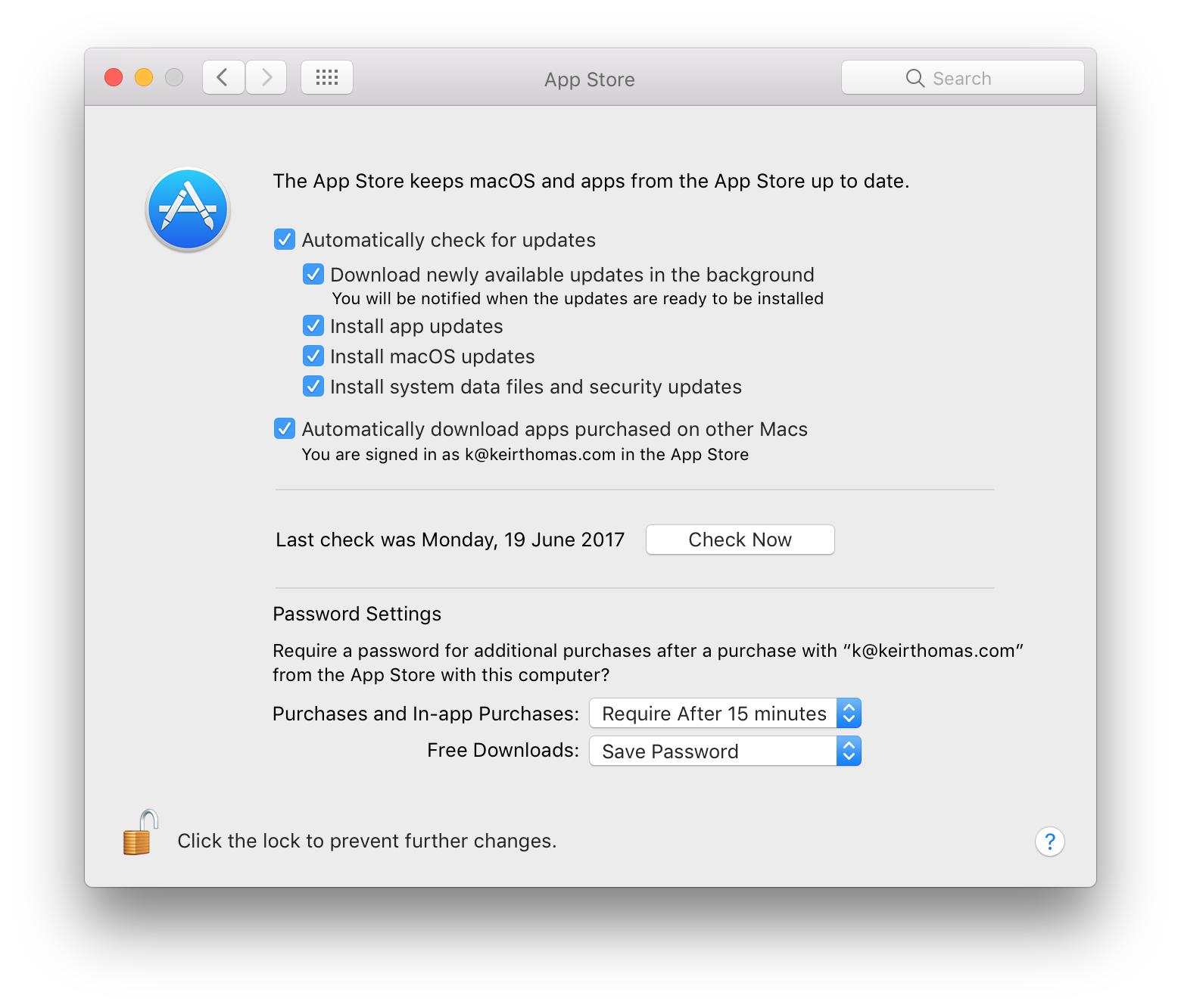 Many apps have their own update routines that usually scan for newer versions as soon as the app is started-up, while some apps – chiefly those from heavyweights Microsoft, Dropbox, Adobe and Google – install invisible background apps that periodically scan for updates and apply them automatically in the background.

In an ideal world a handy app would exist that somehow triggered EVERY app’s built-in update routines in the background but if it exists then we’re not aware of it. Appversion (free trial scans 12 programs in alphabetical order) is the next best thing, however. It scans through the system to find the version numbers of applications and – if you tick the Check Onlinebox – will even look online to see if a newer version is available.

The results are shown in a nice list, and those updated are clearly indicated in the status column. Following this, however, updating is a manual task: If an update is available then you can either start-up the app to trigger its automatic update routine, or just head over to the developer’s website to grab the update yourself.

For what it’s worth, you can view the version number of an app without the need to start it by selecting it within the Applications list of Finder, and tapping Cmd+I (that’s I as in info, not the number 1 or the letter L). This will open an inspector window, and you an look under the Version heading near the top. Of course, once an app is up and running you can discover the version number by clicking the application menu, and then About. 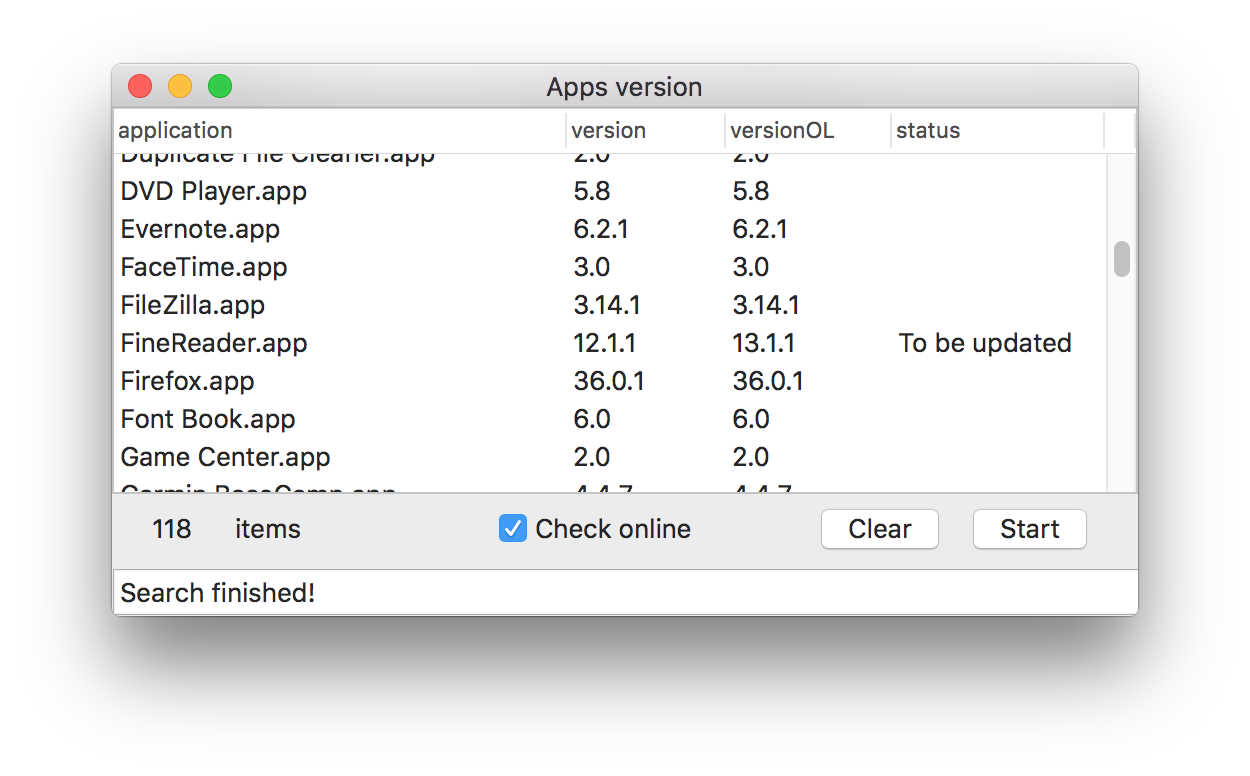 Being clever fellows here at Macworld, we’ve figured out a way to easily update many popular apps in one fell swoop. However, there are a handful of unfortunate caveats. Firstly, our method doesn’t cover all apps. It mostly covers software that’s free and also freely available, like browsers, or antimalware software.

Secondly, the trick uses the Brew and Brew Cask system, which are a third-party way of installing apps. They work exclusively via the command-line, which means you’ll need to work in a Terminal window. The commands required are pretty straightforward, though, and once you’ve got the initial hard work taken care of then you can pretty much sit back.

If you fancy giving a try then here are the instructions.

Searching for and installing apps

… and then type a keyword from the name of the app in question. For example, to search for Malwarebytes Anti-Malware, I might type the following:

In my tests this returned the following:

Apps are installed by typing brew cask install and then the full name of the app as quoted when you searched, so to install Malwarebytes Anti-Malware I would type the following:

As I’ll discuss in a moment, the benefit of the brew cask system is that apps it installs can all be updated with one single command. Therefore it makes sense to use brew cask to install apps wherever possible, and perhaps even to use it to reinstall apps you might already have installed.

To do so, start by searching to see if the brew cask system has the app in question, using the instructions provided above.

If it does then you’ll first need to uninstall the app in the usual way by dragging it from the Applications list to the Trash. In most instances this should leave your personal settings where they are, but that’s not always the case – and there’s no real way of knowing other than to search via Google to find out other people’s experiences.

Once the app has been dragged to the Trash, use brew cask to install it using the instructions provided above.

If in future you want to see what apps you’ve installed using brew cask, use the following command:

— Upgrading brew cask apps You can periodically open a Terminal window to update ALL apps you installed via brew cask using the following command:

You might want to do this, say, every month, or perhaps more frequently depending on your level of paranoia! You’ll be shown any apps that are out of date and asked if you want to update. Tapping Y will do so. If you don’t get asked up update then, well, none of the apps you’ve installed via brew cask are out of date!

Note that this command won’t update some apps that have their own background automatic updaters, such as Google Chrome, because that could cause problems. In any event it’s usually better to rely upon the built-in autoupdater anyway. 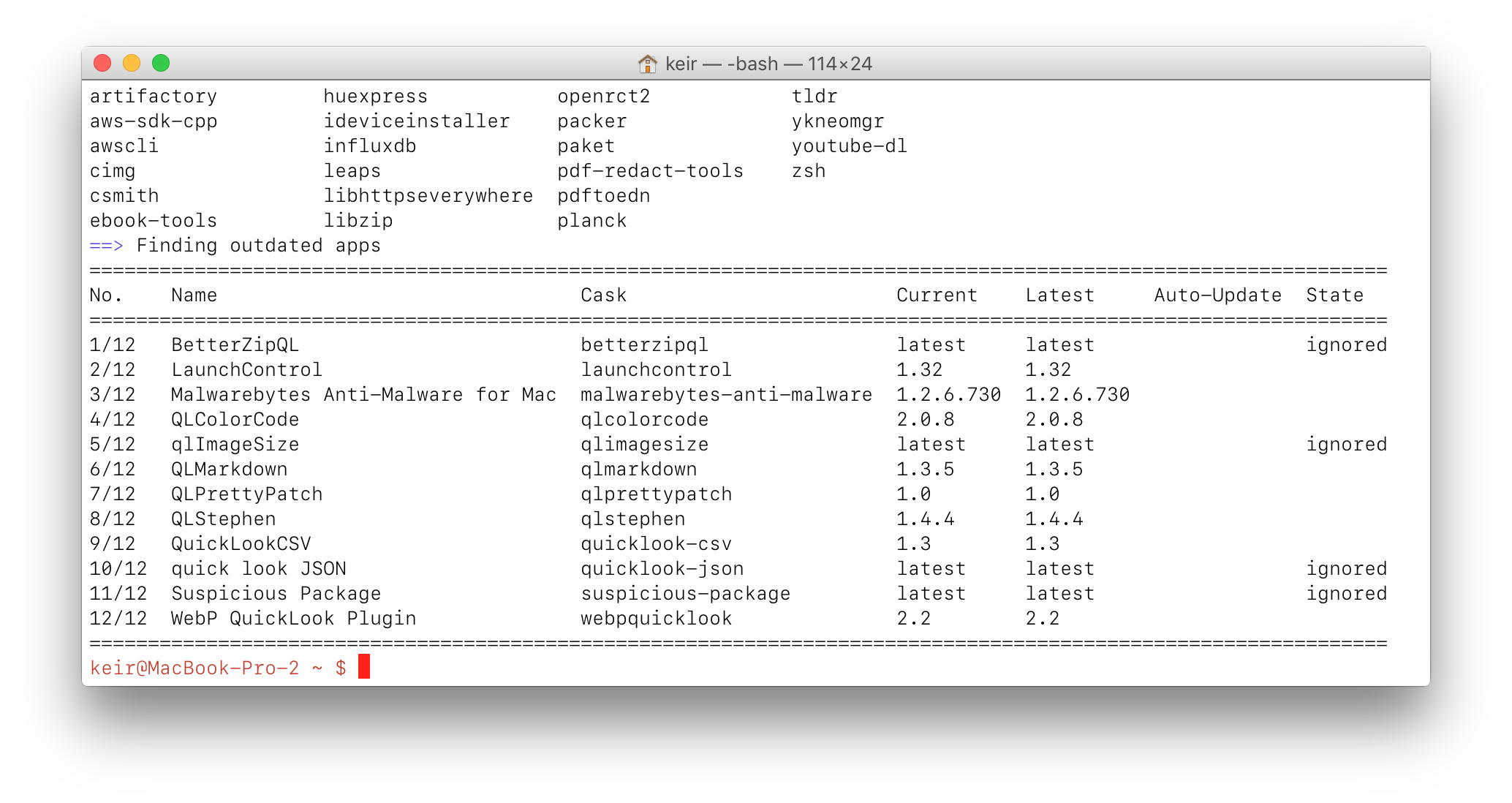