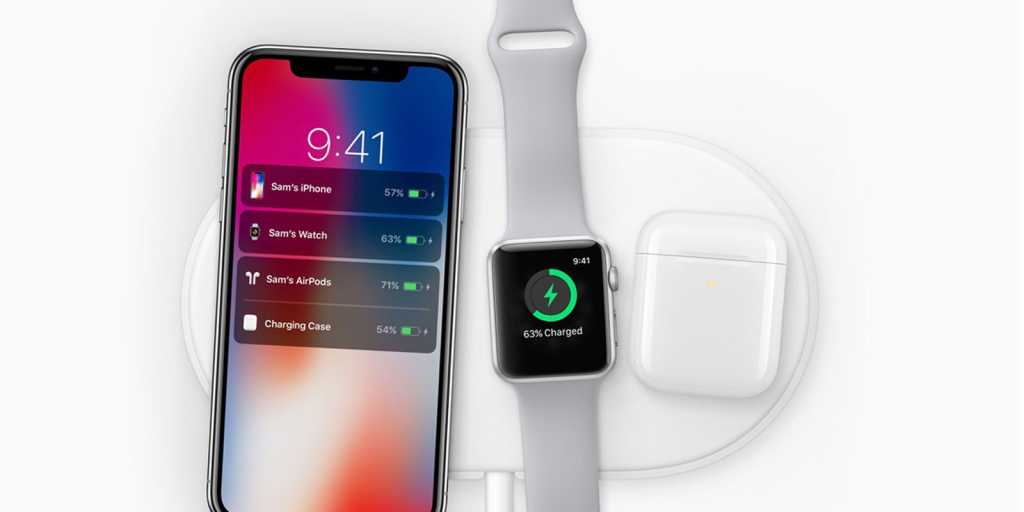 Way back in September 2017, Apple announced plans for a hybrid wireless charging pad capable of powering up an iPhone, Apple Watch and AirPods case at the same time, while intelligently balancing the correct amount of charge for each device depending on its needs and power levels. This device was called AirPower, and Apple told us it would launch in 2018.

But toward the end of that year the company removed all mention of the product from its website, and fans began to fear it might never see the light of day. In March 2019 Apple confirmed that it had cancelled the AirPower project, which seemed to have been plagued by difficulties.

Has the project really been cancelled, though? Persistent rumours claimed that Apple was continuing to work on the charger, and credible reports in 2021 suggest that AirPower, or an AirPower-like product, is back on the cards.

In this article we gather everything you need to know about the AirPower wireless charging pad: its likely release date (if it ever ships), the design, tech specs and features, and why Apple cancelled it – and then seemingly uncancelled it again. We also discuss reports that there will be two versions: one for charging multiple devices, and another that handles just one.

If you’d like to read our thoughts on AirPower’s weirdly persistent interest among rumourmongers, read The enduring appeal of Apple’s AirPower project. And for those who are interested in alternatives that are available right now, we’ve rounded up the best wireless iPhone chargers in a separate article.

When will AirPower come out?

AirPower is out already. Sort of.

Some pundits thought AirPower would come out in the second half of 2020 alongside that year’s new iPhones. That didn’t happen, at least under the AirPower brand, but MagSafe did, and this delivered at least part of AirPower’s promise. MagSafe is a magnetic wireless charging standard, and in one of its applications – the MagSafe Duo, available from Apple’s store – it can do hybrid multi-device charging. 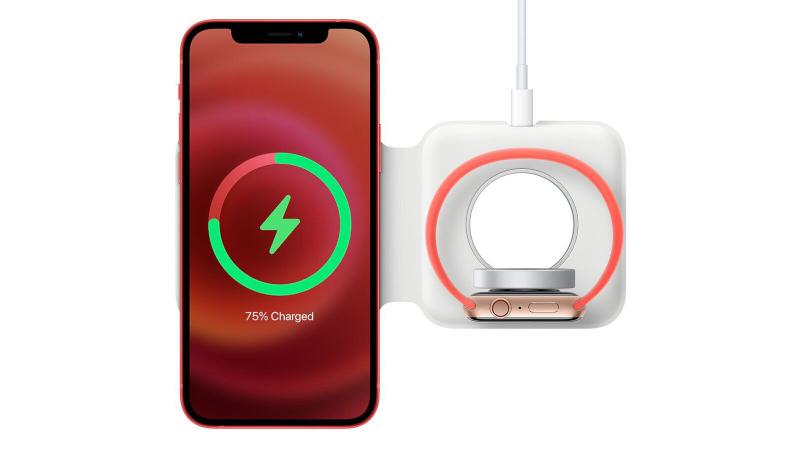 Does this put an end to the project? Rumours suggest not.

In June 2021, long after the MagSafe Duo launched, we reported on claims (by the usually reliable Bloomberg reporter Mark Gurman) that Apple was still working on AirPower or another device with AirPower-like capabilities.

And in July 2021 an Apple patent from early in 2020 was discovered that appeared to describe AirPower features (and would not be applicable to MagSafe products). The technology in question would enable a wireless charger to handle devices that are moved around on its surface without requiring an exact sweet spot.

Patents, of course, are notoriously bad predictors of the timing of a launch – sometimes they crop up in a product three or four years down the line, sometimes they never result in a real product at all. And now that the company has officially cancelled AirPower, and has MagSafe to offer instead, there is far less pressure on Apple to come up with an AirPower announcement by the end of 2021.

There were endless rumours, while the AirPower project was live, that problems were afflicting it; conversely, as soon as it was officially cancelled, rumours started to point to these problems being fixed. You should naturally approach such speculation with a degree of scepticism.

Jon Prosser (who is a leaker with a moderate track record of predicting launches), tweeted in March 2020 that Apple’s engineers “haven’t given up yet and they’re trying to re-engineer the coils to displace heat more effectively”. He added that the project was back at the prototype stage.

He cautioned that there are no guarantees that the product will make it to customers, and one assumes that Apple will be wary of making any further announcements until it’s sure everything is good to go. But Prosser also insists that he wouldn’t post a leak until it was sourced from multiple contacts, and he does have a good reputation.

See AirPower project back on for more on this development.

And, as we said, this isn’t the first we’ve heard of AirPower being resurrected. Ming-Chi Kuo has predicted that Apple would launch a “smaller wireless charging mat” in the first half of 2020, although he didn’t specify whether this would appear under the AirPower branding and may have meant a single-use charger instead of a hybrid.

And in December 2018 iOS developer Steve Troughton-Smith had tweeted that Apple had “finally fixed it” and that AirPower could launch “whenever Apple wants”.

Where is AirPower? 🤷‍♂️ All I’ve been hearing is ‘they’ve finally fixed it’, so, if true, it could ship as a product whenever Apple wants. Hopefully alongside the smart battery case for the XS?

What we do know is that Apple fiercely wants a product to aid wireless charging. It’s become particularly important to the company in the wake of a European mandate that seeks to make all manufacturers use the same chargers: if Apple was forced to remove the lightning port it might make a move to wireless charging instead of USB-C.

Will there be two versions of AirPower?

It sounds like there might. Respected Apple analyst Ming-Chi Kuo predicted earlier this year that Apple was planning a version of AirPower which charges only a single device at a time, so as to get around overheating issues. More recent reports suggest this is being developed, and may be released, alongside the three-device one.

Jon Prosser, the leaker quoted above who gave firm predictions that AirPower was back on, said the multi-device charger is codenamed C68; another Twitter user has now said that another model, C26, will be smaller.

So looks like C68 and C26 are both Airpower mats in testing. C68 from @jon_prosser is the bigger one, and C26 is smaller single device one (thanks @lwq1992 for confirming)

For more on this story, read AirPower lives again – in two versions.

Why was AirPower originally cancelled?

Apple reportedly planned a June 2018 launch, but this was stymied by “a series of technical hurdles” and “supply-chain challenges”, according to a Bloomberg source.

In a statement in March 2019, hardware engineering boss Dan Riccio said: “After much effort, we’ve concluded AirPower will not achieve our high standards and we have cancelled the project. We apologise to those customers who were looking forward to this launch. We continue to believe that the future is wireless and are committed to push the wireless experience forward.”

According to AppleToolBox sources in April 2018, Apple originally delayed the AirPower due to difficulties producing the product and concerns over AirPods support. But Apple’s biggest issue, they said, was the Apple Watch.

This has always included Qi charging, but changes to the design of the Series 3 made it incompatible with most non-Apple chargers: it has a convex back and chargers are usually flat. This design means third-party chargers weren’t able to create the connection required to charge – and the same problem existed for the Apple Watch 3 on the AirPower.

The other issue flagged by AppleToolBox was the requirement that charging AirPods requires an additional purchase of a $69 case. Apparently there had been disagreements at Apple as to whether people would pay for a case to enable them to charge their AirPods on an already expensive charger.

A Bloomberg report in June 2018 claimed AirPower was delayed because the engineering team had encountered a number of challenges including ensuring the charger doesn’t overheat.

Another issue outlined in that report was related to the placement of sensors on the pad. The AirPower was to be the first wireless charger to charge three devices at a time. It’s thought that it was because Apple wanted users to be able to place the three devices anywhere on the pad that the design was proving difficult.

Some might think that Apple was wrong to announce AirPower so early, but in these areas, where it is necessary to get FCC ratification, the company often does reveal its plans early (as it did with the original iPhone).

Based on the video showcase at Apple’s September 2017 keynote, the AirPower was originally conceived as a white mat large enough to accompany three devices (iPhone, Apple Watch and AirPods) at the same time, with a single power lead connected to the wireless charger. We haven’t heard anything since to indicate that the newer designs are externally different – although the arrangement of the charging coils inside has been rethought.

The MySmartPrice report mentioned above suggests that due to the 8-7-7 coil configuration required for the wireless charger the AirPower would need to be thicker than the prototype Apple showed off back in June 2017. 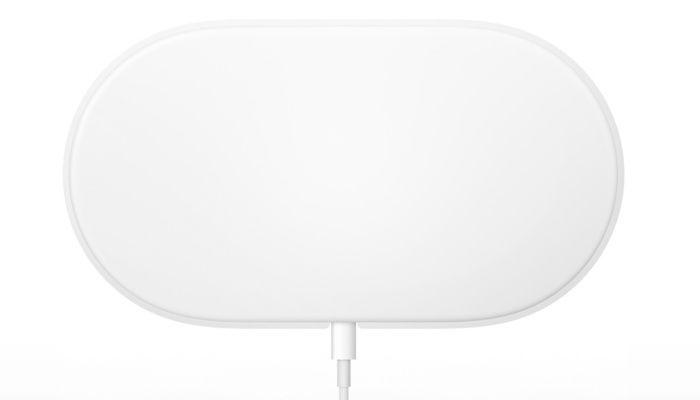 AirPower was supposed to have the ability to intelligently manage the charging system by allowing all compatible devices to ‘communicate’ between each other. Of course that wouldn’t apply to the single-device version of the product that Apple is currently expected to launch alongside the multi-device one.

A Bloomberg report (from June 2018) claimed that AirPower would include a custom Apple chip running iOS that would conduct on-device power management and pairing with devices. We’ve since heard that it will have an A11 chip to manage heat.

“The system has a great interface. They intelligently work together and communicate with each other to manage the charging through one more efficient charging system. This is not possible with current standards but our team knows how to do this,” Tim Cook said on stage at the event.

That means that if you’re charging both your AirPods and iPhone 11 on the AirPower, the devices will communicate with each other and ‘decide’ how much power each device requires.

The current charge of all devices on the AirPower mat will be displayed on the iPhone if it’s also on charge, another feature not offered by other wireless chargers.