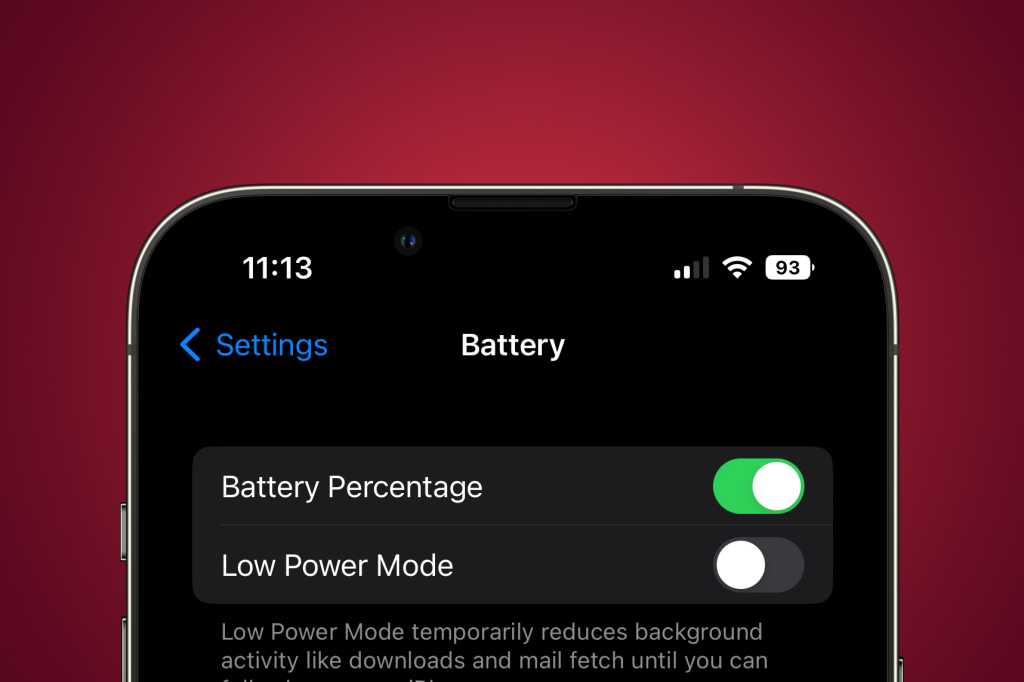 Ever since the introduction of the notch in 2017, iPhone owners have had to cope without knowing their exact battery percentage at a glance. Because there was less space in the status bar along the top edge of the screen, Apple cut back on the information shown: just the time, the cellular and Wi-Fi signal strengths, and a graphical icon telling you roughly how much power you’ve got remaining. To see exactly how much battery you had remaining, you had to swipe down to open the Control Center.

But as of the launch of iOS 16 in September 2022, that has changed. Apple has given users the option to put the battery percentage back on their home screens— here’s how to get it.

How to get your iPhone to display battery percentage

Show the battery percentage with iOS 16

First things first, you need to have iOS 16. Here’s how to install iOS 16 on your iPhone.

Provided you’ve got iOS 16, activating the battery percentage icon could not be easier. Open the Settings app (the icon shows a number of gray cogs), swipe down and tap Battery. Tap the toggle labelled Battery Percentage, and you’ll see that the battery icon at the top-right of your screen now shows a number inside.

If you’ve got an iPhone SE or other pre-notch handset, then showing the battery percentage is slightly different again–but considerably easier.

Like the notched iPhones these models always show remaining battery power as an icon at the top right of the Home screen, but they have plenty of space to show it as a number too. Our understanding is that such devices will show the battery percentage by default, but if you can’t see it, go to Settings > Battery and tap the Battery Percentage toggle.

Note that this isn’t quite the same as the superimposed number that’s made possible by the iOS 16 update: it sits next to the battery icon, like in the olden days. But there are certain benefits to having a pre-notch design.

What if your iPhone can’t get the feature?

That seems almost offensively simple, doesn’t it? Unfortunately, not all iPhone owners will find it so easy.

First of all, not all iPhones can install iOS 16. We’ve listed the iOS-16 compatible iPhones in a separate article, but the headline news is that the iPhone 7, 6s, and first-gen SE all miss out. You need an iPhone 8 or latter, essentially. (However, if you’ve got an iPhone SE or other pre-notch handset, the news is good in other ways–see the next section.)

But even some of the phones that can install iOS 16 won’t get this specific feature. As we revealed in our story covering the announcement, the battery percentage indicator is not available on the iPhone XR, 11, 12 mini and 13 mini. (We suspect that mini iPhones, and those with LCD displays, don’t have enough resolution to make the small text as clear as Apple would like it.)

In short, you need one of the following phones to get the battery percentage feature:

However, that may be changing. In the first iOS 16.1 beta, Apple has added the battery percentage indicator option to the iPhone XR, iPhone 11, ‌iPhone 12 mini‌, ‌and iPhone 13‌ mini. There’s no guarantee that it’ll launch in the general iOS 16.1 release in October, but our fingers are crossed. For now, you can download the iOS 16.1 public beta to test it out.

How to see battery percentage on an iPhone without iOS 16

If your phone misses out on the new feature, or if you aren’t running iOS 16, there are workarounds.

One way to quickly see the exact battery percentage is to swipe down from the righthand side of the top edge and bring up the Control Center. Above the various controls and toggles in this screen, you’ll see that the status bar has been pulled down from the top and now has enough space to expand the battery status into a graphic and a percentage figure.

(Note that this is specific to the notched handsets. Other iPhones blur out the top status bar in Control Center, but iPhones that lack the notch are able to display the battery percentage anyway.)

There are other methods you can use to achieve the same thing.

Finally, can we recommend the use of a battery widget? Tap and hold on the home page and then tap the plus sign at the top left. You’ll see a range of widgets that can be added to that page. Search for Batteries. The medium and large versions of this widget show the exact percentage for your iPhone, as well as for other connected devices.