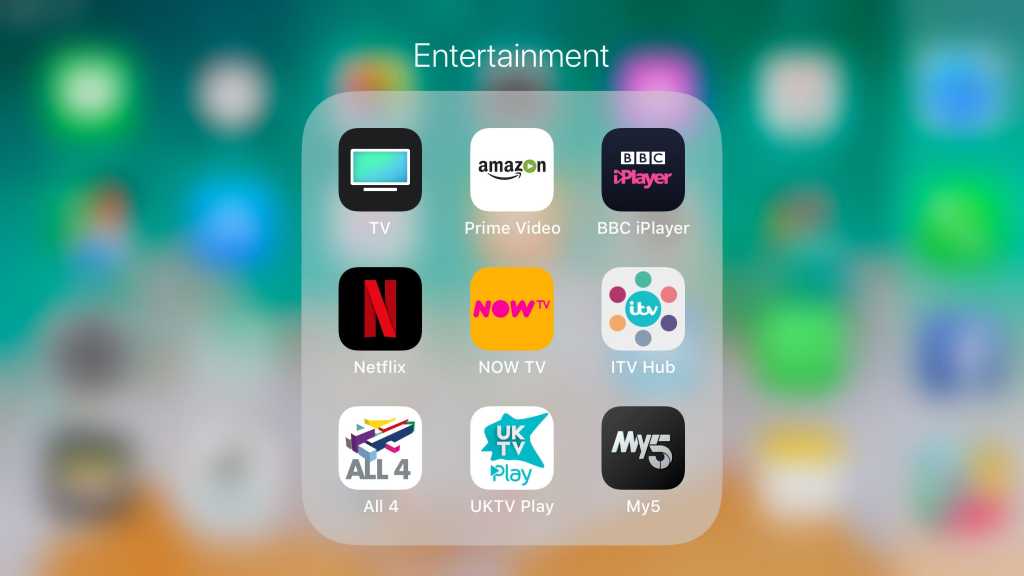 The TV app has been a fixture on the iPhone and iPad for some time now. It arrived in the UK back in 2017 when it replaced the Videos app. The TV app arrived even earlier in the US.

Back when Apple first introduced the app, it positioned is as a solution to the problem of having so much to watch in so many apps. With Netflix, Amazon, and services local to your country, streaming countless films and TV shows it can take a whole evening to find something to watch.

Apple’s idea was to create a library app where you could search for something to watch and then see where it was available – and choose the best deal. If a film is free on Netflix you won’t want to pay to watch it on iTunes, after all. Users can also jump straight to the things they are already watching in the Up Next section.

We thought that the TV app was pretty neat, although there are some features that used to be in the Videos app that are missing (like the next episode of Peppa Pig automatically playing). Apple clearly thought it needed to do more though, as the company has announced that changes are coming to the TV app in 2019.

Changes include access to the TV app on more devices. Right now, the TV app isn’t only available on the iPhone and iPad, you can also use it on the Apple TV, but later in 2019 it will be coming to Macs, smart TVs and Roku and Amazon FireTV devices. Read about the devices that the Apple TV app will work with here.

Other changes include Channels: a new home for services you subscribe to, within the Apple TV app; and new Apple-made content coming from a number of Hollywood A-listers. Find out what TV shows are being made by and for Apple’s TV+ subscription service here.

Find out more about Apple’s plans to launch its own streaming service here.

What can you watch on the TV app?

Currently you can’t actually ‘watch’ anything in the TV app unless it’s something you purchased or rented from iTunes.

The apps other purpose is that it can be used to search for content across all your apps and services, including (in the UK) iPlayer, iTV Hub, My 5. Even though All4 is now available as an app it’s not searchable within the Apple TV app. You can also search Prime Video and Netflix, and the kids app Hopster.

There are changes coming to the TV app in 2019 though. In May, when iOS 12.3 arrives on your iPhone or iPad you will be able to subscribe to various ‘Channels’ within the TV app, including Showtime, Starz, Smithsonian Plus, and Tastemade in the US. Subscribing will be a simple process as it will be linked to your Apple ID, and once you are signed up (or using a trial) you will be able to watch the shows from that service inside the TV app.

How to use the TV app on iPhone/iPad

Once you open the app you’ll see a Watch Now screen. The first time you use the app you will see a Welcome to the Apple TV App video, which shows you a little of what to expect from the app.

Once you have started using the app you will see a shortcut to the last things you were watching in this Up Next section.

What to Watch showcases the content Apple is pushing and a collection of options from Amazon Prime Originals, BBC, ITV, My and so on.

When the new version of the TV app launches in May 2019 these recommendations will come from a combination of Apple’s team of human editors and AI. The company says it will use machine learning to recommend shows you are actually likely to want to watch based on your viewing habits. 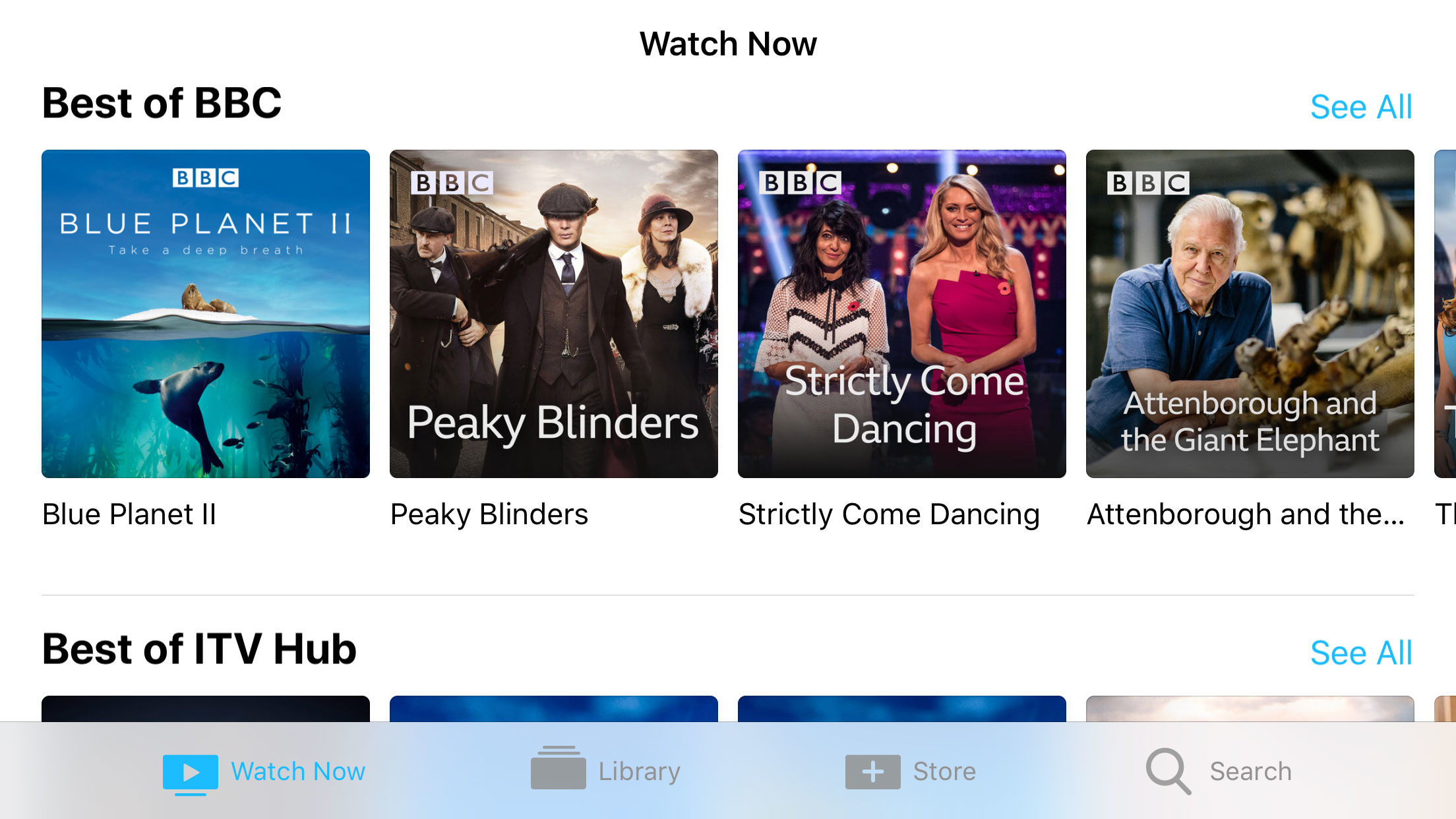 There is also a Browse by Category section about half-way down the page, that makes it easy to search by TV series genre (comedy, drama, reality, documentary and sports). You won’t find everything that’s available here though – for example, some shows that we know are on iPlayer, such as Have I Got News For You, couldn’t be found this way.

If you want to find a particular show, and it isn’t being showcased by Apple, it’s easy to search for it.

Since the TV app doesn’t integrate with Netflix particularly well, searching for Brooklyn 99 doesn’t bring up Netflix as a result, although, if you search for Peppa Pig you will see the option to watch on Netflix.

How to watch films & movies in Apple’s TV app

For now the TV app doesn’t really showcase films very well, althoguh it has got better since the app first launched.

If you are looking for movie inspiration there’s a section of Trending Films, but this is predominantly films currently available on iPlayer in the UK. There’s also a Hit Films section further down the page featuring films from various services. 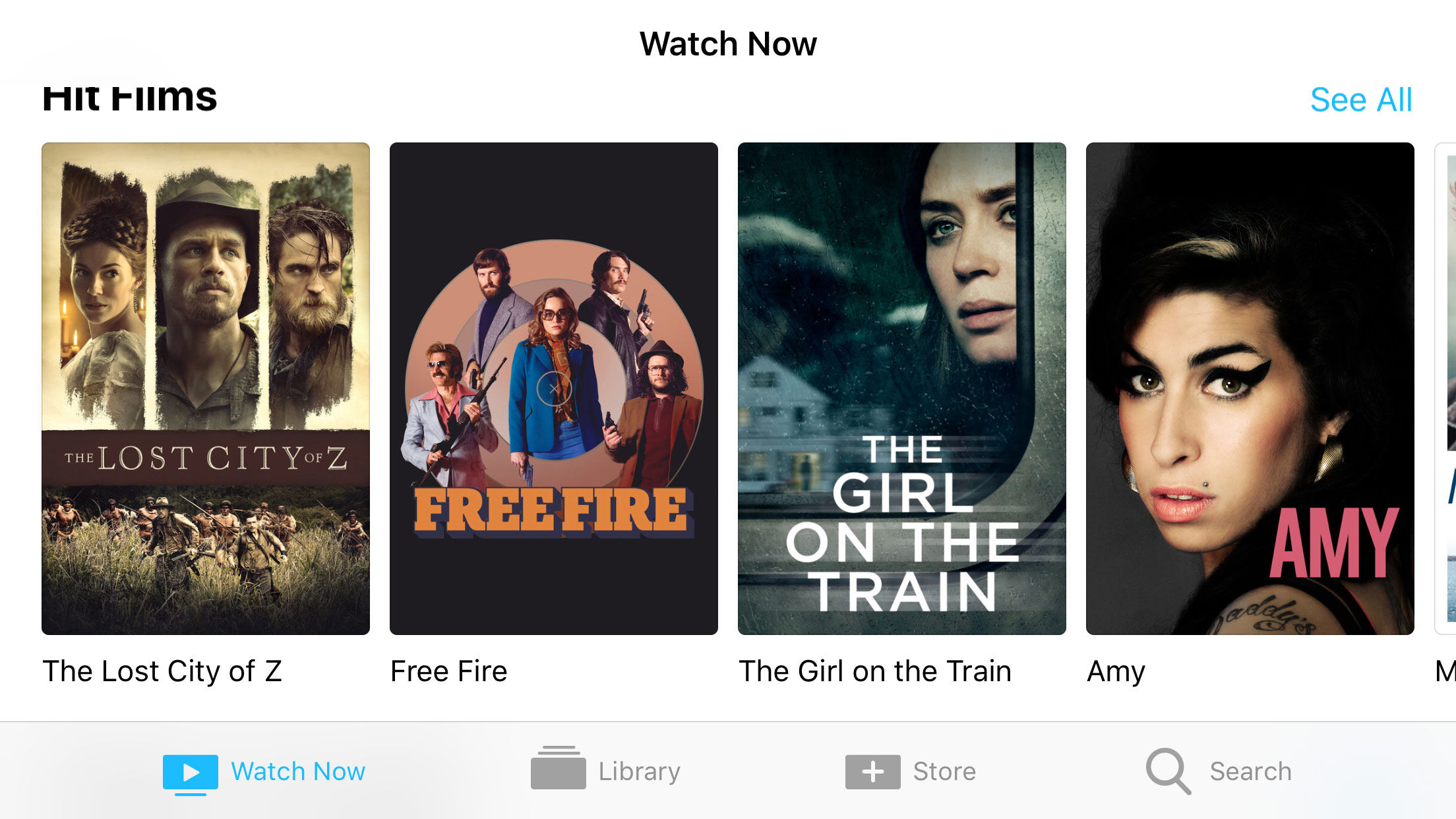 Another option is to go to the Search page where you will see Trending Films (Elf was not surprisingly one of the most popular options before Christmas – it’s on Amazon Prime Video and iTunes).

You can also search for a film to see options of where you can watch it.

Another way to find content using the TV app is to click on a Cast & Crew image to see other programmes or films that the person appears in. So if you like a particular actor it’s easy to find other films they star in. 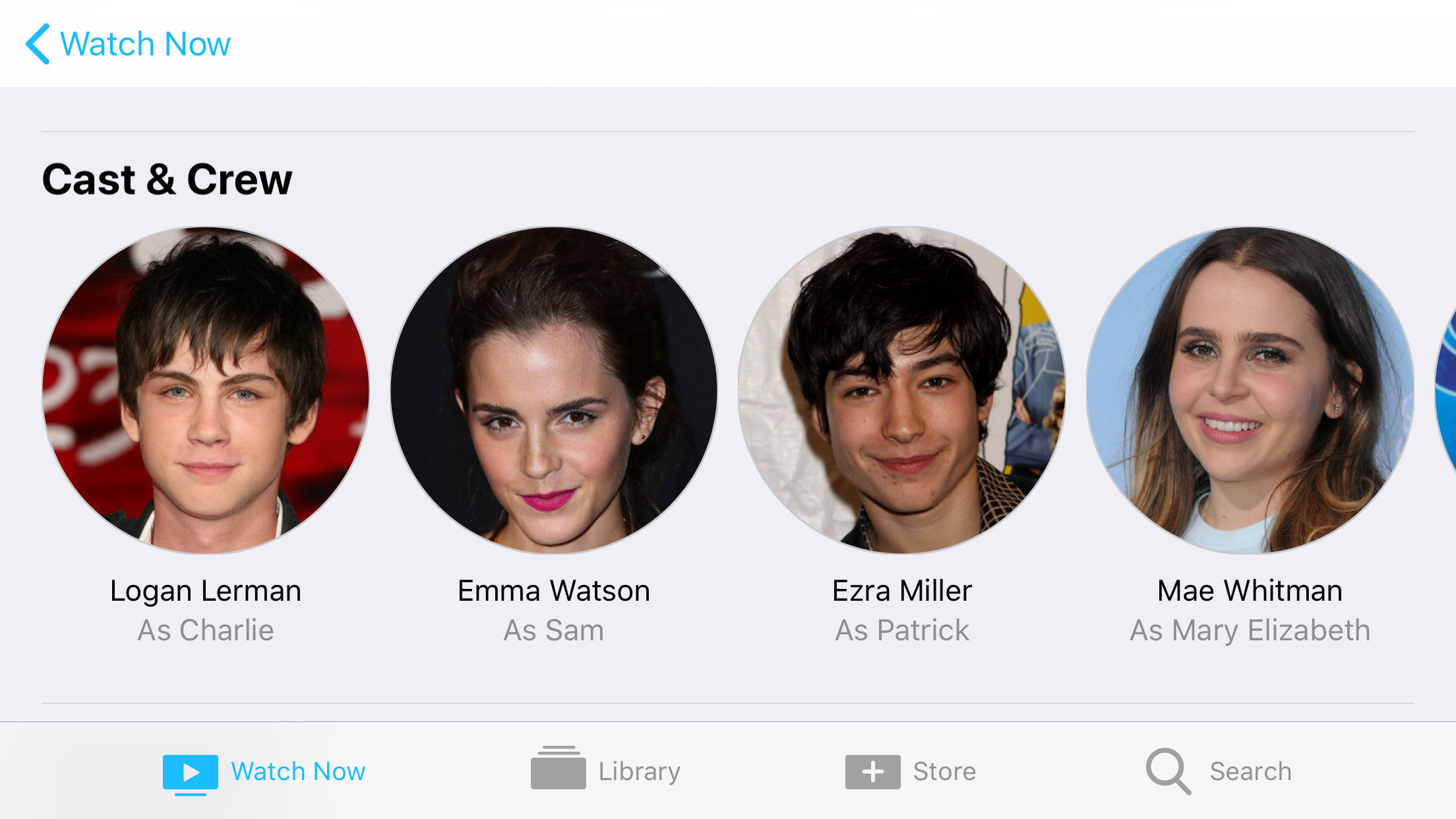 You can also browse related content the same way.

The only way you can watch movies within the TV app right now is if you buy or rent them from Apple’s Tunes Store. The TV app is helpful in that it lets you know if the film you want to watch is available to watch elsewhere – especially if you could be watching it for free in one of the services you subscribe to.

If you’d like to find out how you can watch movies on your iPhone or iPad for free read this.

How to autoplay the next video in the TV app

We have a separate article addressing the fact that the TV app doesn’t autoplay the next video if you purchased a series from iTunes.

It’s a major annoyance if you frequently turn to the iPad to entertain the kids during a long car journey, for example. Here’s what to do if you are using the TV App on your iPhone and it no longer autoplays the next video.

How to watch TV shows and films on the TV app

Once you have found a show or film you wish to watch, either by tapping on any of the shows that Apple has showcased in the Watch Now page of the TV app, or by searching you are all set to start watching. Here’s how you do that:

If you haven’t yet installed the companion app in which you want to watch the content, you will need to do so.

The first time you tap to play a programme in a companion app (iPlayer, Amazon Prime Video, etc) you will see a page telling you about the apps you can use with the TV app, and it will alert you to the fact that the information about what you are watching will be shared with Apple. This is only so it can let you watch from where you left off on any of your devices. Tap Continue and the app will open up and the episode will start to play.

If these TV services become Channels in the TV app when the new Channels feature is added in May, you may be able to sign up for them within the app and watch the content within the TV app.

We selected Blue Planet II, one of Apple’s What to Watch recommendations. At the time it was available in iPlayer as well as iTunes. 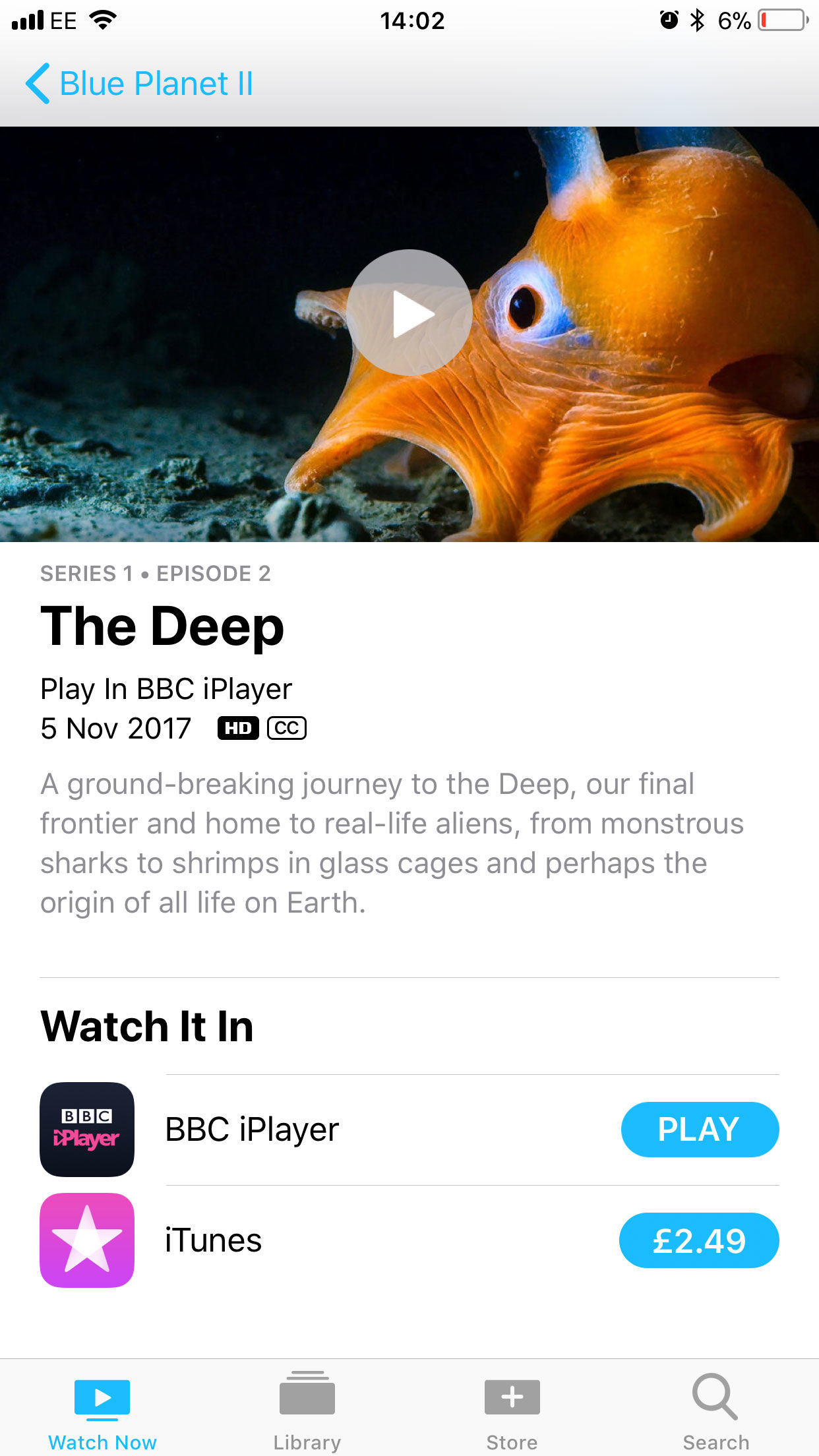 When we tried to watch Peppa Pig, there were options to watch in My5, iTunes, or, if you have a subscription, on Amazon Prime Video. 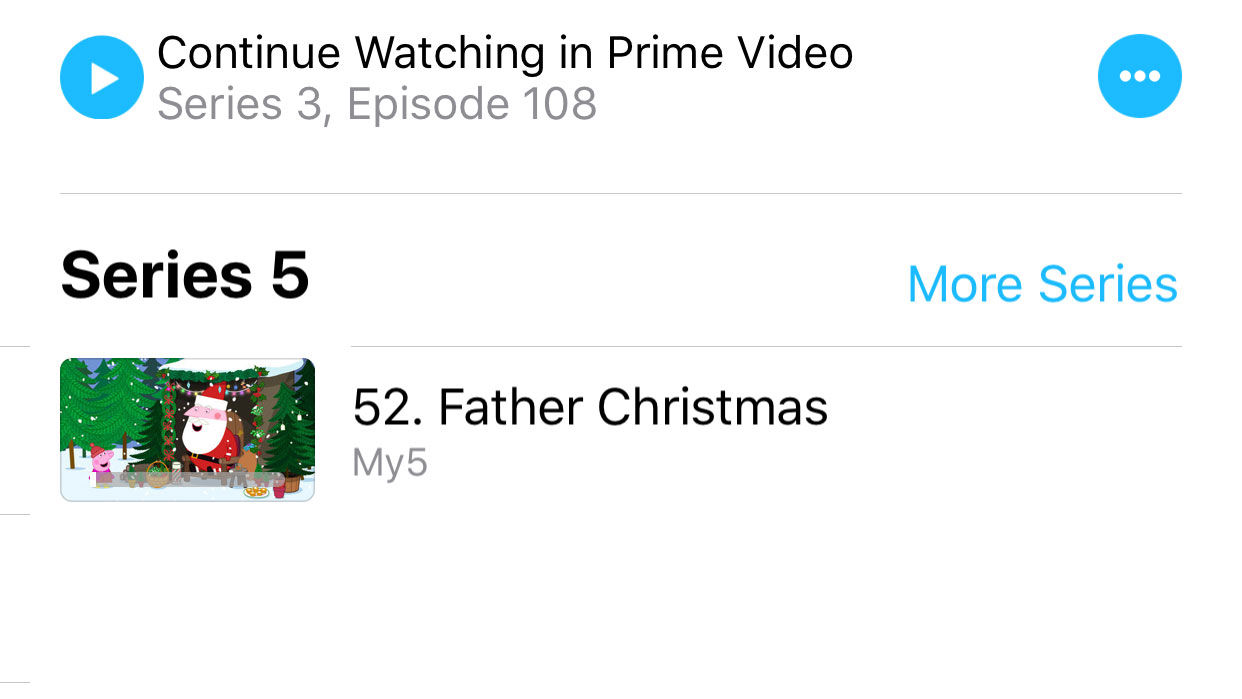 One of Apple’s What to Watch recommendations that you can see inside the TV app is The Grand Tour, which is only on Prime Video. 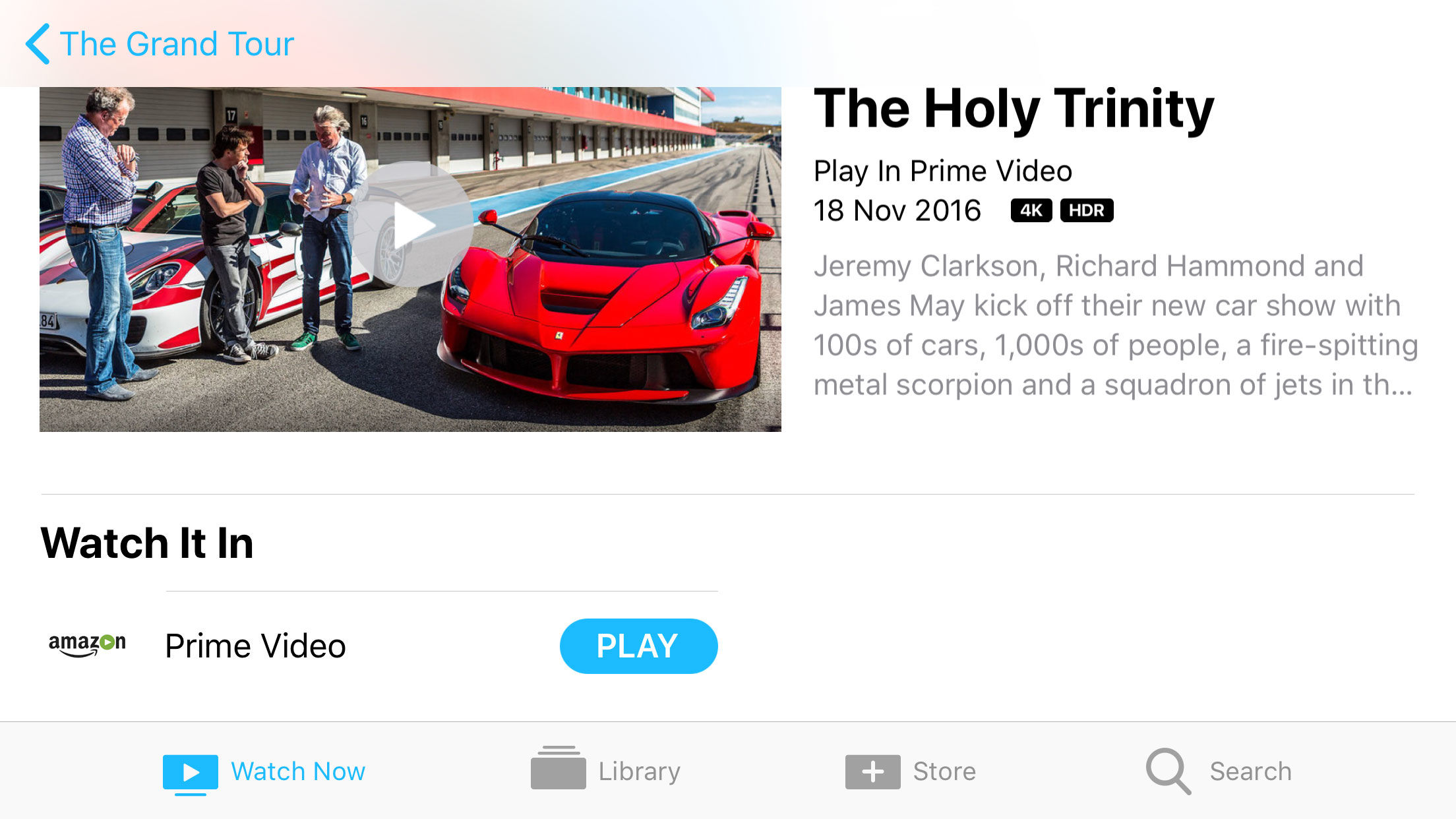 We tapped that cover image to go into The Grand Tour page where there was a shortcut to Play in Prime Video, as well as a list of all the available episodes and shortcuts to them.

You can also see Related content in the TV app page about The Grand Tour, so you can view all the Top Gear episodes that are available on the various companion apps, as well as various shows that Apple has deemed related (Fifth Gear, and so on).

You can’t watch Netflix within the TV app – and the Netflix CEO has made it abundantly clear that Netflix will not be signing up to be a channel (because they think Apple takes too big a cut and too much control of the data). However, you can – at least for now – search for content and see if it is available on Netflix.

That said, not all the content on Netflix will appear in the TV app results. For example, we know that Brooklyn 99 is available on Netflix, but a search in the TV app brings up no results.

What if you have already bought programmes on iTunes? How can you find the content you already own? Along the bottom of the screen is a Watch Now, Library. Store and Search.

How to browse the iTunes Store from the TV app

There is a shortcut to the Store from the TV app. This is one of the options along the bottom of the screen.

Tap on Store. Here you will also find links to content on the various companion apps, like ITV Hub and Amazon Video. You will also see a showcase of New Releases on iTunes, shortcuts to Top Movie Rentals, TV Series you can Buy or Rent on iTunes, and TV Box Sets.

You also have the option to Browse All Apps, which gives you an overview of which apps work with the TV app.