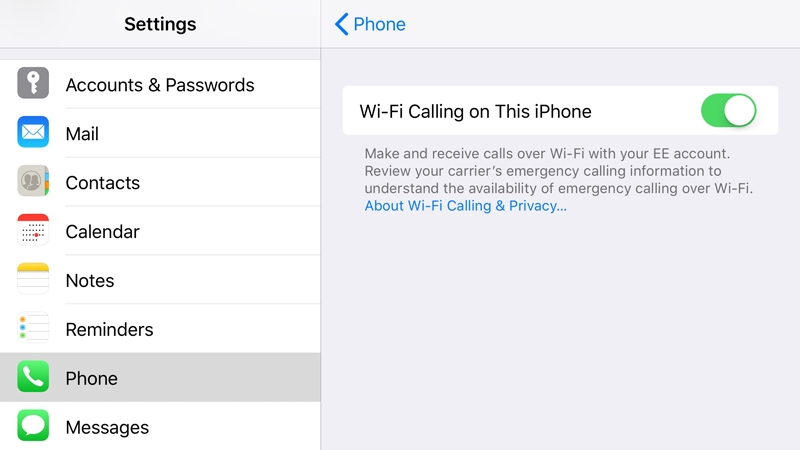 It’s annoying – and potentially extremely inconvenient – when you can’t get a phone signal. If you’ve got a Wi-Fi signal, though, you can still place a call by using the Wi-Fi Calling feature.

You can turn on Wi-Fi Calling by opening the Settings app, going to Phone > Wi-Fi Calling, and then tapping the slider so it turns green. But in this article we explore how to set up and use Wi-Fi Calling in a little more depth, as well as discussing the benefits and drawbacks of this feature. For more general advice, have a look at our iPhone tips.

What is Wi-Fi Calling?

Traditionally, if you’ve had a bad signal at home or when you’ve been out and about, you’ve just had to deal with it. That’s not the case with Wi-Fi Calling, which enables you to send and receive calls and texts with a weak or even non-existent signal as long as you’re connected to Wi-Fi. 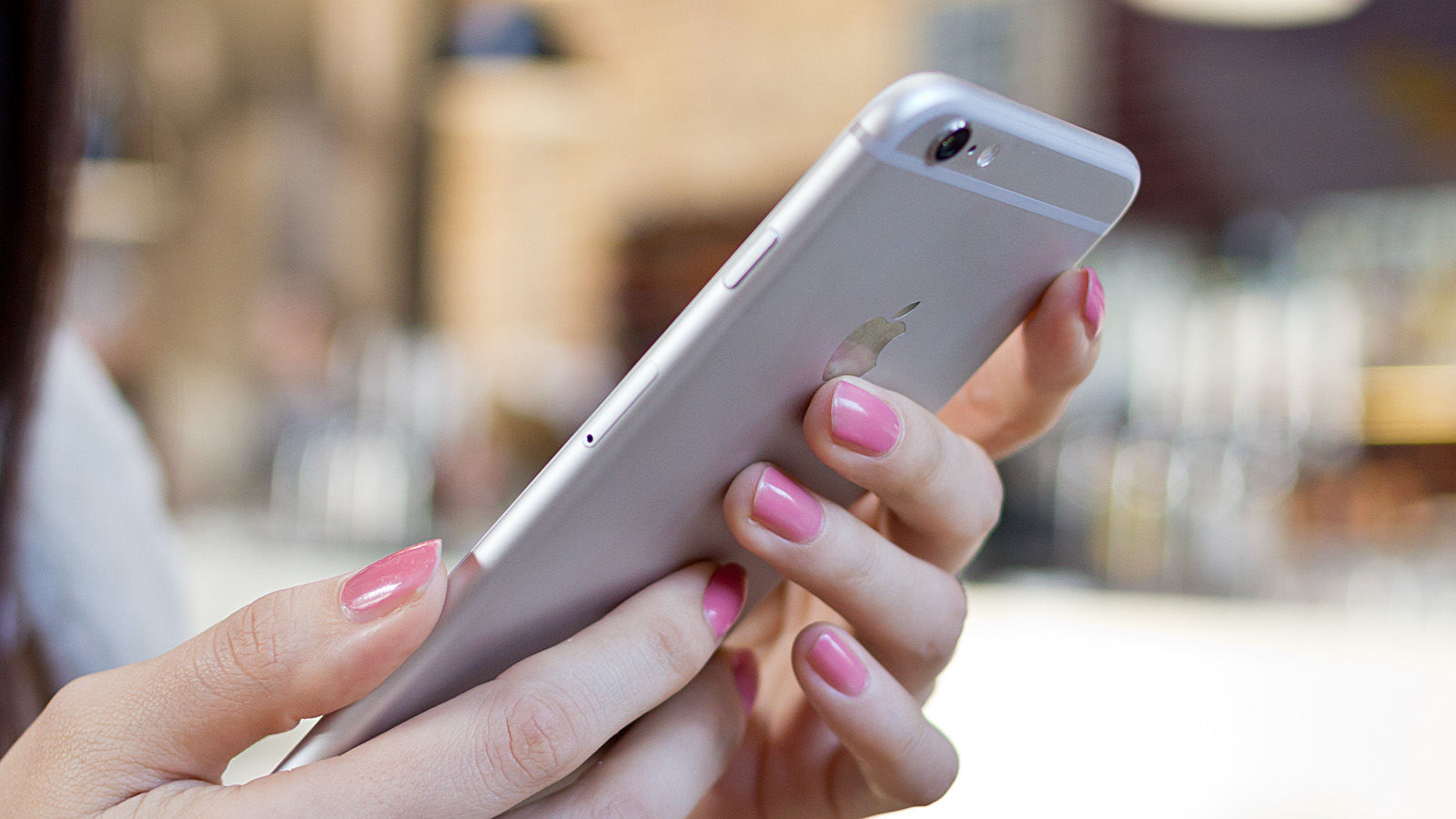 What are the benefits of Wi-Fi Calling?

The main benefit has to be that as long as you’re connected to Wi-Fi, you can make and receive calls and texts when you’ve got very little or no signal. This is great news for phone owners who get bad reception at home or work, as it’s a cheaper and simpler alternative to switching service providers.

It also means that if you live in London, you can connect to the Wi-Fi on the underground and make calls on the platform while waiting for the next train. We tried this, and while it works, people that aren’t aware of Wi-Fi Calling will look at you like you’re crazy.

The best part is that you can just make a call or text like you normally would. Having to use an app requires people to change their habits, so users welcome a service that doesn’t interrupt that.

Which iPhones can use Wi-Fi Calling?

You need an iPhone 5c or later, running iOS 8.3 or later.

Wi-Fi Calling can also be used on the iPad and iPod touch (if they have iOS 9 or later), Apple Watch (watchOS 2 or later) and Mac (2012 or later, excluding the mid-2012 Mac Pro, and running El Capitan or later).

As well as having the correct hardware, you need to be on a carrier that supports the Wi-Fi Calling feature.

US carriers who offer Wi-Fi Calling

How to turn on Wi-Fi Calling

Open the Settings app and go to Phone > Wi-Fi Calling. Tap the slider so it turns green.

You may now see a warning that location and identity information will be accessible by your carrier/network operator. (Your location may also be shared with emergency services if your device has Wi-Fi Calling enabled when you place an emergency call.) If you’re happy with all this, tap Enable. 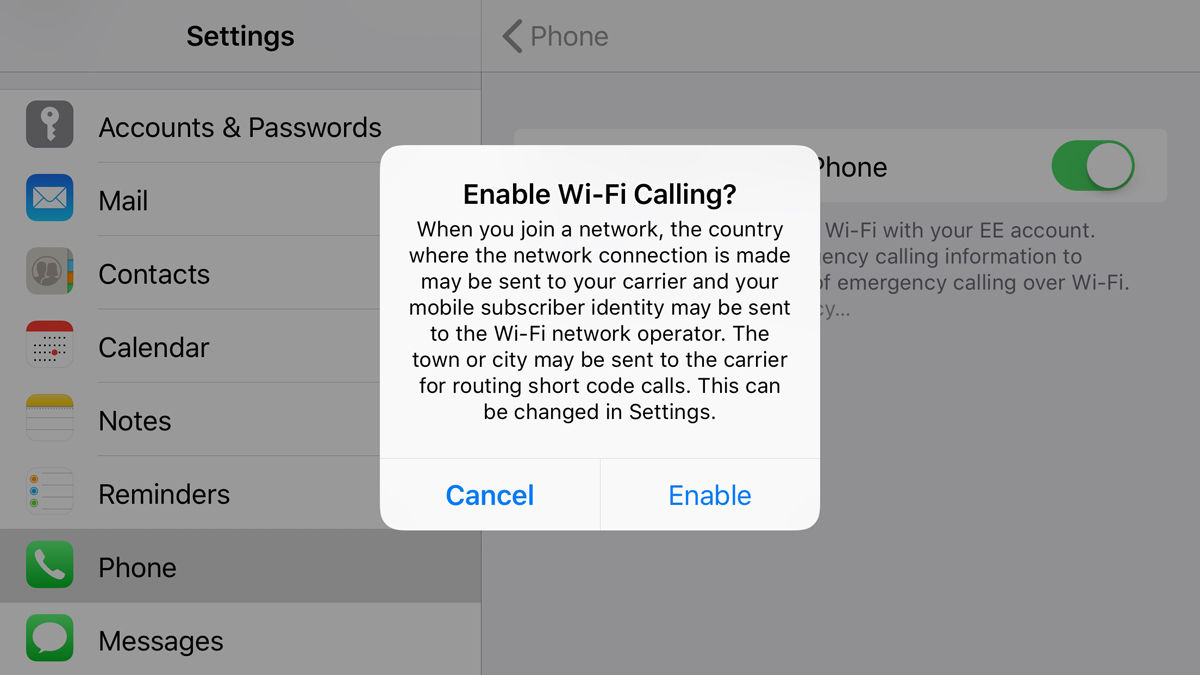 You’ll now see ‘WiFiCall’ at the top of the screen, between the Wi-Fi strength icon and the name of your carrier. This indicates that the feature is switched on.

In some cases iPhone users have had to wait up to 24 hours for the feature to be activated, receiving a text from their carrier when it was ready. Get in touch with your carrier if there’s a delay and/or the feature doesn’t seem to be working as expected.