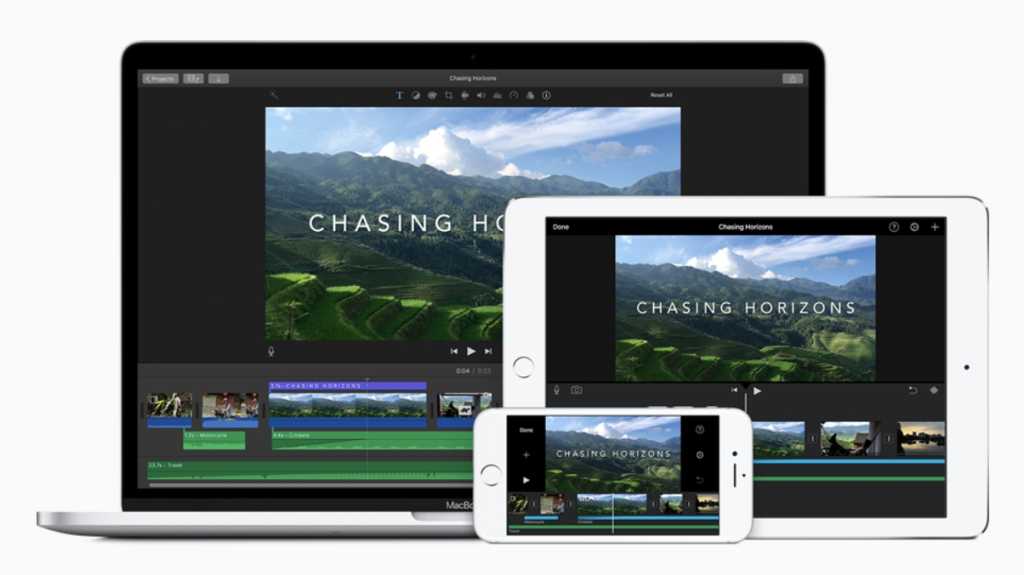 Whether it’s the 4K 60fps glory of the iPhone X, or the marginally humbler 4K 30fps of an iPhone SE, you can capture some amazing video these days when you tap the little red record button in your iPhone camera app.

These clips can be enhanced still further, however, with a spot of editing and splicing together; but for that you’ll need some decent editing software. Here are some of the best video editors available on iOS. 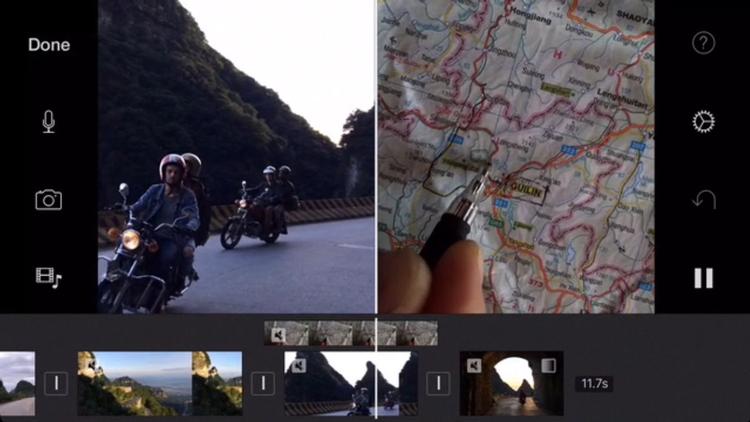 If you’re first starting out with video editing then Apple’s own iMovie is a fine choice. One of the main reasons for this is that it’s free, but you wouldn’t think that when you see the mini masterpieces that can quickly be created.

Using a simple drag-and-drop interface you can easily assemble your clips, trim their lengths, and then add titles, filters, effects, or even splitscreen scenes which combine two pieces of video. The Trailer feature is also very cool, as it allows users to insert clips into pre-designed spaces in a template. This then automatically generates a professional, Hollywood style movie trailer.

If you have a Mac then there’s the option to move the project from your iPhone to it and continue your efforts on a bigger screen. 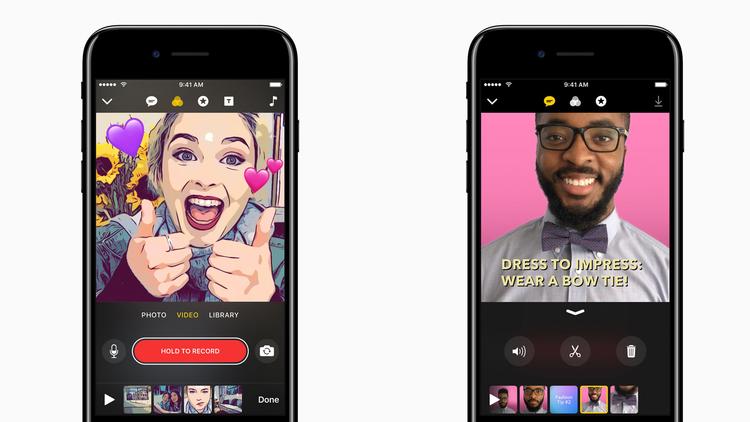 If all you want to do is put together a few videos, still images and titles to share on social media, Clips might be what you’re looking for. It’s a simple app aimed those with little video-editing experience, but the results can be a lot of fun.

Video can be shot in the app itself, or you can import pre-recorded segments from your camera roll. There’s a range of filters that can be applied to either – these include a cartoon style and another that looks like an inked drawing – plus a variety of titles and graphics that can be overlaid.

One unique feature is that as you record a video in-app you can dictate captions to appear on the screen at the same time (well, okay, slightly after you’ve said it – this isn’t a time travelling app, after all).

Sure, you’re not going to make an epic Nolanesque blockbuster with Clips, but for fast and fun sharing it’s great. For detailed advice on getting the most out of the app, see  How to use the Clips app. 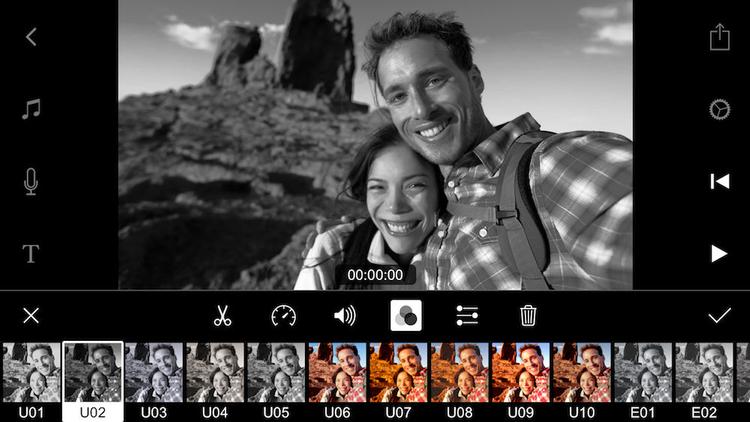 Those wanting something a little more technical than iMovie or Clips should find enough tools in Filmmaker Pro to keep them busy for a while. In this app you can adjust the colour gradient of footage, making it much easier to attain the look of classic film stocks or giving your scenes that extra visual pop.

There’s also the facility to adjust white balance, saturation and contrast, so you can have things look just as you want them.

One particularly cool feature is where Filmmaker Pro can replace any green screen scenes you’ve recorded, placing a new background into the shot in with only a few taps. There’s also a wide range of titles, graphics and transitions, and even a dedicated, manual video app to give you complete control over how footage is recorded.

All this doesn’t come for free, though. While there is a trial version available, any movies you output with this will bear the Filmmaker Pro watermark. You can remove this from the app permanently for £19.99/$19.99, or there’s a £5.49/$5.99 p/m subscription that unlocks everything in the app – including that manual video mode.

This cost might deter many people, but if you’re serious about making movies on your iPhone, you should definitely give Filmmaker Pro a go. 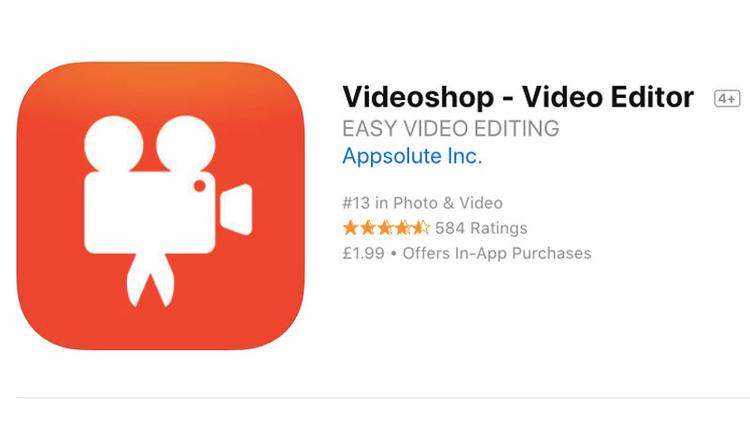 Here’s another simple-to-use editor capable of impressive results. With this you’ll be able to line up multiple videos on your time line, trim them, adjust the colour and contrast, alongside adding transitions, filters, titles, music, sound effects, and even voice overs.

Videoshop also has a few special modes, which include slo-motion, playing clips in reverse, and the ability to create stop motion video (if you’re the very patient type). There’s even a tilt-shift feature for those moments when you want to highlight an object or person.

That’s a lot of editing tools for such a low asking price. 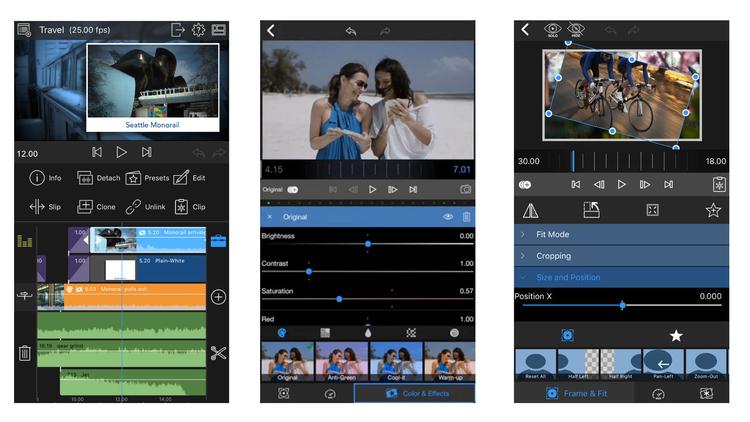 It’s a difficult task to build an iPhone video editor that’s easy to use but offers complexity and depth. LumaFusion is an app that walks that line in a marvellous fashion.

Somehow the developer has managed to include multiple video tracks on the timeline, which can be used for graphics, titles, stills and video itself, plus three audio tracks so you can have the vocal, sound effects and bed music all editable and separate.

Add to this the Chroma key (for green/blue screen work), advanced colour correction abilities, slow-motion and reverse modes, live audio mixing, sophisticated audio editing and effects, editable titles that can include shapes, and many, many more features. It’s no wonder that LumaFusion is used by journalists in the field, as well as dedicated filmmakers.

The asking price is £19.99/$19.99, and while that might seem high for an app, we think it’s an absolute bargain if you want to take your video creations to the next level.

The iOS App Store is bursting at the scenes with high quality photo and video editing programs. While the five listed above are our current favourites, we could easily have included several others without diluting the standard in any way.

It seems evident then that whether you want to make short moments to share on Facebook, or slave for hours to hone the next cinematic sensation, the iPhone is the place to do it.