Now TV is a serious rival to the likes of Netflix and Amazon Prime, but it has one annoying disadvantage if you usually use a Mac or PC to watch from: you have to download a dedicated app, rather than stream videos from your web browser.

That makes it a bit more fiddly to watch Now TV on a Mac than it is to watch a rival streaming service, but once you get everything set up the first time it’s mostly painless. Here’s how.

How to install the Now TV app on Mac

First up, if you want to watch Now TV you’ll naturally need to be a subscriber. Unlike Netflix, Now TV doesn’t offer a single subscription – instead you have to sign up for one of five plans: the Entertainment, Sky Cinema, Kids, Sky Sport, or Hayu (reality TV). Prices vary between the plans, but there are free trials for most so that you can test them out and see what you think.

For some reason Now TV doesn’t allow you to stream video through Safari, Chrome, or any other web browser – even though you can use the website to browse the available shows and films. Instead, the first time you try to watch something on your Mac you’ll see a pop-up appear: 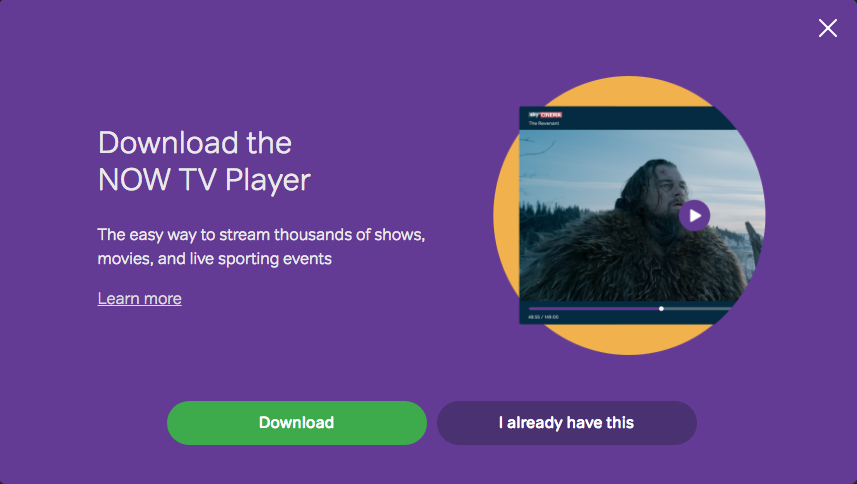 Unsurprisingly, if you don’t already have the app you’ll want to click ‘Download’. If you get this wrong and accidentally close the pop-up – or just want to go straight to the download – this link will automatically download the Mac version of the player.

Next you need to actually install the player, which is much like any other Mac app. Find the file (likely in Downloads), open it and confirm you want to open it if a security check appears, then just let the installer run. You’ll need a Mac that runs OSX 10.9 (Mavericks) or later, but since that was released in late 2013 there are good odds that your Mac is running a more recent version of the operating system by now.

Now you need to go back to your web browser, and open the tab with whatever you were trying to watch in the first place, where you should see a new pop-up. Tick to confirm that you’ve installed the Now TV Player, then click ‘Start Watching’. If you’ve closed the window, or had downloaded the player from the link above, you can go straight to the page of something you want to watch. Now TV should automatically detect the player, and if not click ‘I already have this’ to reach this same screen: 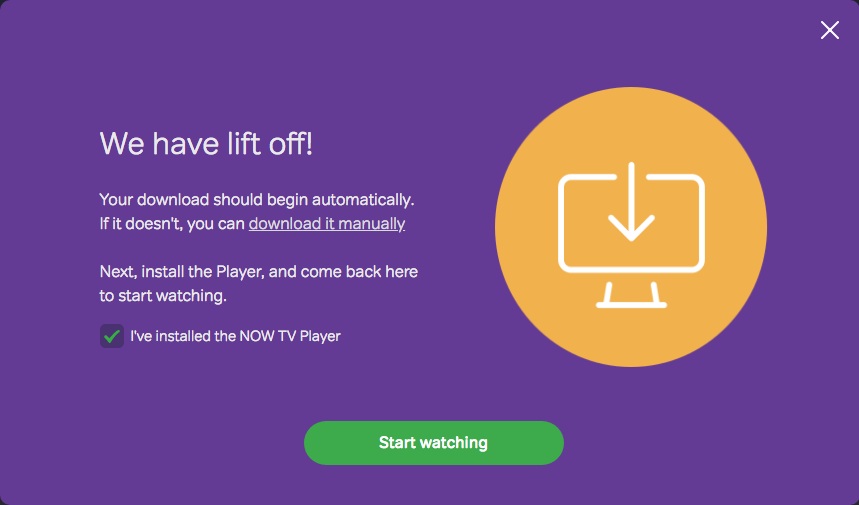 The first time you try to watch something, you should see yet another pop-up appear to confirm that you want to open the Now TV Player app. It should look something like below, but will vary based on your browser. Make sure to tick the checkbox if you want to avoid this confirmation pop-up next time:

Believe it or not, there’s then one final pop-up to go – this time it’s macOS double-checking you do want to open the Player. Again, click ‘Open’ to confirm that you do, and you shouldn’t see this one again. With a bit of luck, at this point the Now TV Player will open and begin automatically playing the TV show or film that you’d selected.