At its September 2018 event Apple announced a few new iPhones: not just the new high-end iPhone XS and XS Max, but also a cheaper option for people who don’t have a spare grand: the iPhone XR.

The iPhone XR has the same notched design of last year’s iPhone X (Face ID, not a Home button), together with the new A12 Bionic processor, an updated single lens camera, and a choice of six different coloured finishes.

The only downside was that the iPhone XR wasn’t launching until 26 October, with pre-orders of the handset starting on Friday 19 October, and quickly selling out for launch-day delivery. But now the new iPhone XR has arrived!

We also compare this ‘budget’ offering with Apple’s current cheapest handset in iPhone 8 vs iPhone XR and iPhone 7 vs iPhone XR, and with a similarly priced Android flagship in iPhone XR vs Sony Xperia XZ3 and the  Pixel 3 vs iPhone XR You should also note that this isn’t the long-rumoured update to the iPhone SE, which would have been much cheaper – though naturally we’re now less and less convinced that an iPhone SE 2 is ever going to come out. Finally, for next year’s rumours, take a look at our iPhone XR 2019 article.

The iPhone XR became available to pre-order on Friday 19 October and started arriving on door steps and in stores on Friday 26 October. The new iPhone sold out pretty quickly, but if you missed out on the pre-orders, we explain how to get your hands on the iPhone XR below.

How to get the iPhone XR

The easiest way to pre-order the new iPhone XR is to install Apple’s App Store app on your iPhone if you haven’t already. You can actually run through all the options for the iPhone XR, choosing the model you want. Click add to Bag and you will see options to have it delivered or to pick it up from your local Apple Store.

Of course you don’t need to go to Apple to buy your iPhone XR, you might be able to get a new iPhone XR from your mobile phone network. We have collated the best iPhone XR deals in this article. 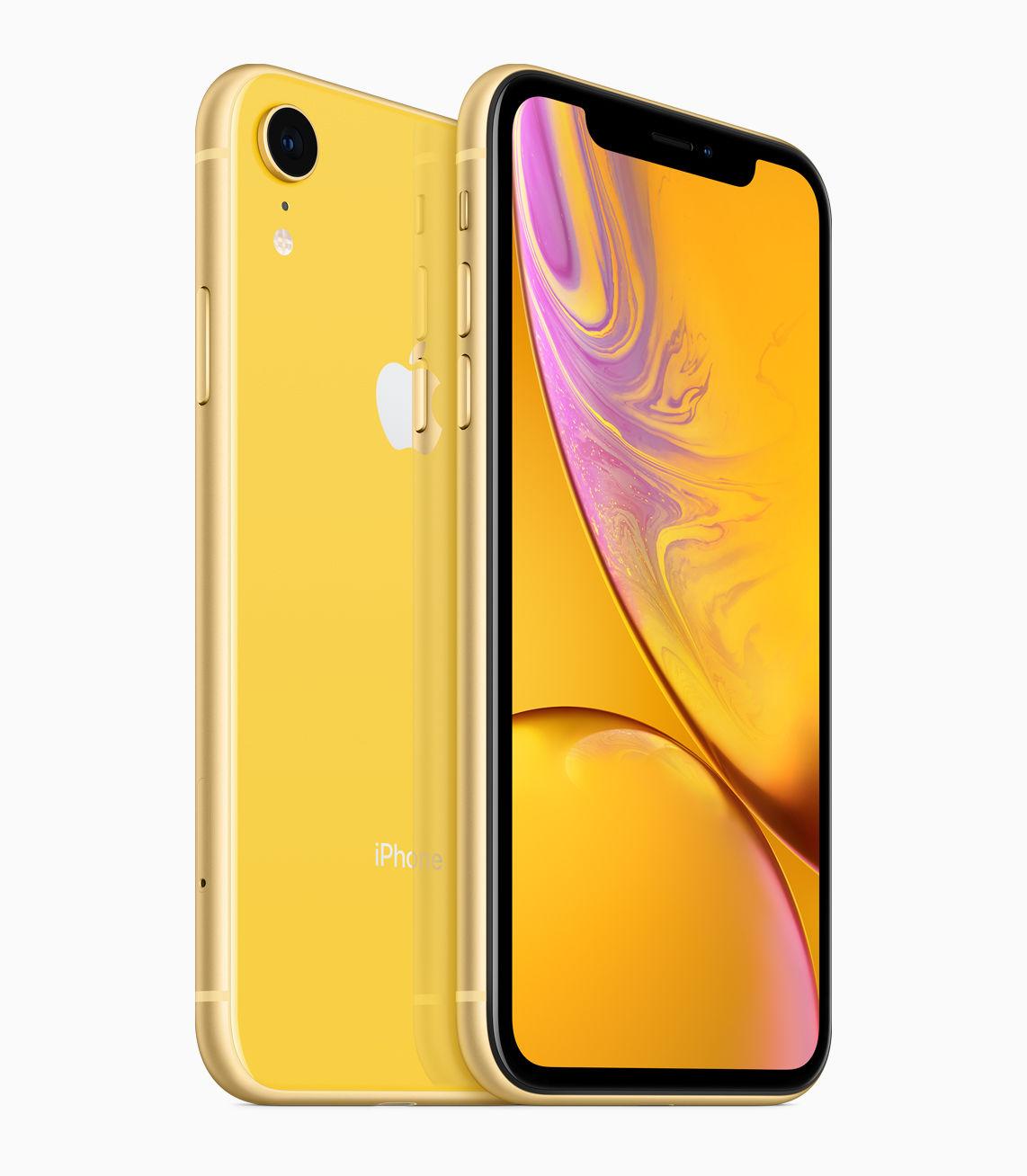 What’s notable about the iPhone XR is that despite its (slightly) lower price point, it actually still looks an awful lot like the iPhone X and the new XS and XS Max.

It boasts a 6.1in screen – midway between the XS and XS Max – but thanks to slightly larger bezels the whole handset is a similar size to the larger model.

As with those phones, the body is aluminium with a glass back – which means wireless charging – though you’ll note that there’s only a single rear camera lens. There’s one other notable difference in the build quality: it’s only got an IP67 waterproofing rating, as compared to the IP68 rating in the XS models. Still, that’s enough to keep it safe from most spills and dust. Check out our round up of the best cases for the iPhone XR here.

Finally, here’s the biggie: much like the iPhone 5c way back when, Apple is throwing in a splash of colour. The XR will be available from launch in six finishes: black, white, blue, coral, yellow, and red (as Apple’s standard PRODUCT(RED) collaboration). 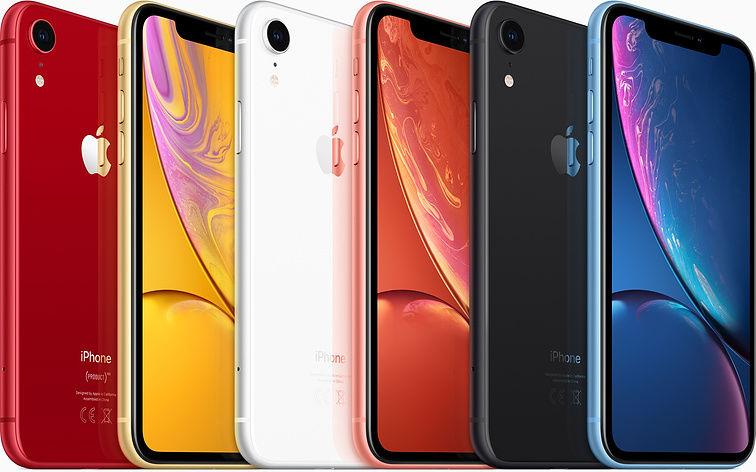 With all these colour options, it appears that Apple will be selling a clear plastic case to go with the iPhone XR. The details of the case appeared in the Canadian press release about the iPhone XR but was mysteriously absent from other versions.

So what about the features? Well, while the XR can’t quite match the specs and performance of its more expensive siblings, it’s definitely no slouch.

There are two big downgrades to the XR as compared to the XS, to help it hit that lower price: the display, and the rear camera.

First up, the display. The 6.1in display is LCD rather than LED, which is probably the biggest reason Apple has been able to keep the price lower – LCD is the tech used in the iPhone 7 and 8, rather than the other X and XS models. 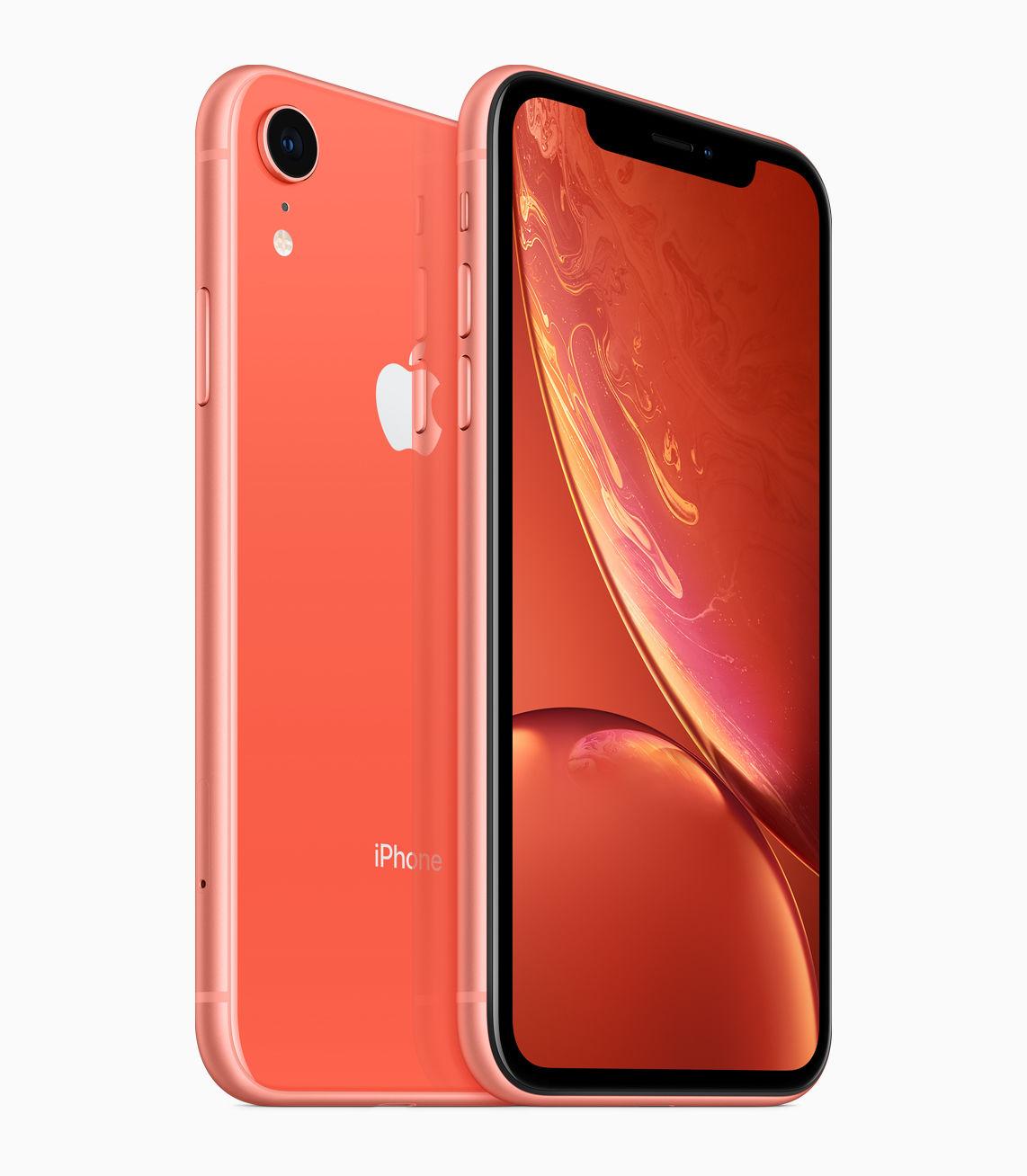 Still, Apple claims it’s the “most advanced LCD ever in a smartphone,” (though it would say that, wouldn’t it?) with a resolution of 1792×828 and pixel density of 326ppi. Apple’s dubbed the screen the Liquid Retina display, and says it’s the most colour-accurate LCD in the industry. Still, make no mistake: this won’t be quite as bright or colourful as the screen in the XS, so that’s what you’re missing out on.

The rear camera is the other major difference. Unlike the two XS models, this only has a single lens – though it is at least the same 12MP wide-angle lens that the other two phones are using for the main shooter, with an f/1.8 aperture and optical image stabilisation.

Despite only using a single lens, Apple has managed to keep portrait mode (a.k.a. the bokeh effect), using software post-processing to blur the backgrounds of photos after they’ve been taken. You’ll also be able to select the level of depth (and thus blurring) that you want in your photos after the fact, a new feature to this generation of iPhone. 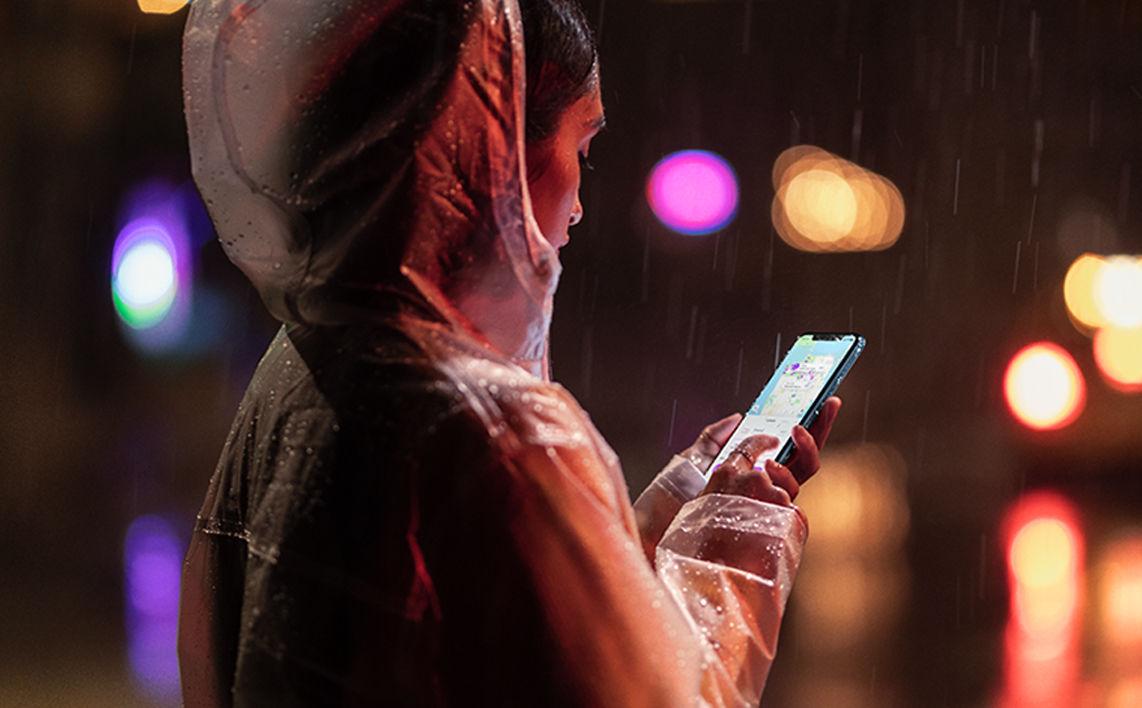 The final omission is a smaller one: there’s no 3D Touch here. Apple tried to hype up its replacement, which it’s dubbed Haptic Touch, but it’s really just a fancy way of saying the phone will sometimes vibrate when you hold down in certain spots, so you will be losing some of the 3D Touch functionality on this phone.

Processor and other specs

Despite those differences, there’s a lot that’s similar between the XR and the XS. Both phones use the same new A12 Bionic processor, both have the same TrueDepth front-facing camera array (and thus FaceID to unlock), both boast wireless charging, Bluetooth 5.0, and stereo speakers.

The A12 Bionic processor has a similar configuration to 2017’s A11, with a six-core CPU and a quad-core GPU. However, it’s the first to be manufactured using a 7nm process, which should mean it’s considerably faster.

In practice this means apps should launch up to 30 percent faster, but apps can also take advantage of machine learning for features like better depth detection in Portrait mode and better mapping of Animojis in FaceTime. FaceID is also quicker thanks to faster algorithms and it runs on a faster version of the secure enclave.

The XR also joins the XS in being one of the first iPhones to offer Dual-SIM. Only China will get proper Dual-SIM (i.e. two physical SIM cards), but if you buy it in the UK and US you’ll be able to use one physical SIM and one separate eSIM – though it’s worth being aware that so far only a handful of networks support eSIMs, so you might not actually be able to use the Dual-SIM setup.

As for battery life, Apple claims the new phone will last an hour and a half longer than 2017’s iPhone 8 Plus.

Finally, on the software side, the XR will support iOS 12 from launch, so will come with all of the app and operating system tweaks and improvements included in the new version of iOS.

Deputy Editor of our sister site, Tech Advisor, Dom covers everything that runs on electricity, from phones and laptops to wearables, audio, gaming, smart home, and streaming.