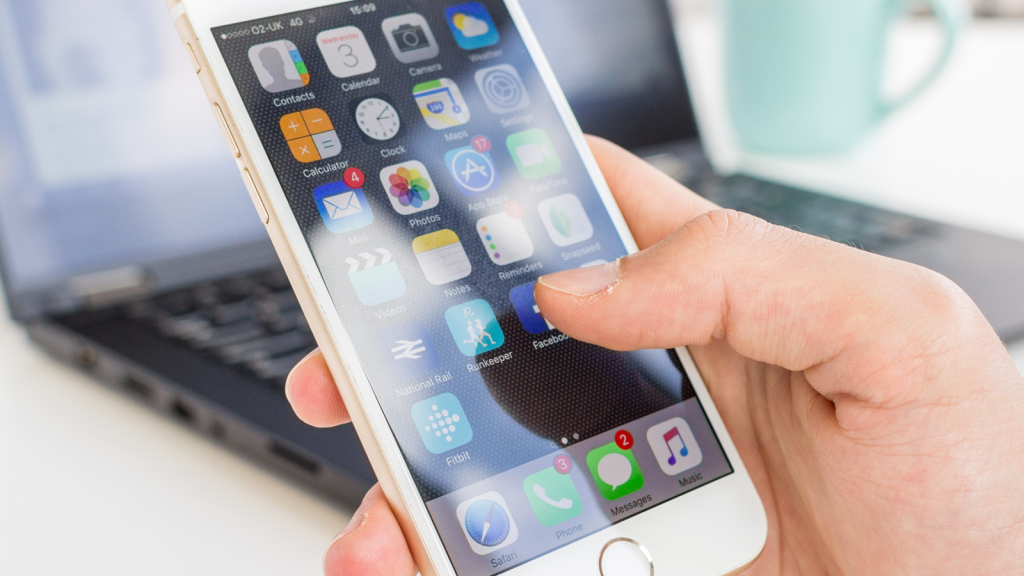 iPhones are incredible devices. Within those diminutive frames lie the ability to journey through the web, play games, keep in touch with family and friends via video chat, get serious work done, and even make the occasional phone call. But it can all be a bit daunting when you open the box and hold one in your hand for the first time.

Fear not, we’re here to take you through the basic (and advanced) controls you’ll need in order to master your device in no time at all. So find somewhere comfy to sit, pick up your iPhone, and join us as we show you how to use iOS gestures.

We’ll mostly be concentrating on the classic style of iPhone – the ones that still have a Home button on the front. If you’ve bought an iPhone XS, XR, 11 or 11 Pro then you’d better off reading our How to use the iPhone XS guide, which covers gestures specific to those devices.

The gesture you’ll use most is the simple tap. As the name suggests, this is just gently prodding the screen for a second or so with your finger. Tapping is how you’ll select options, open apps, and generally tell the iPhone what you want.

In most apps, double tapping (two taps in quick succession, similar to double-clicking on a mouse) will do nothing at all. But it can be a very useful feature when done to the Home button itself as it triggers the Reachability mode, which makes it easier to use the device one-handed.

To see how this works, gently tap (not press) the Home button twice in a row and you should see the top half of the display slide down to the middle of the screen. 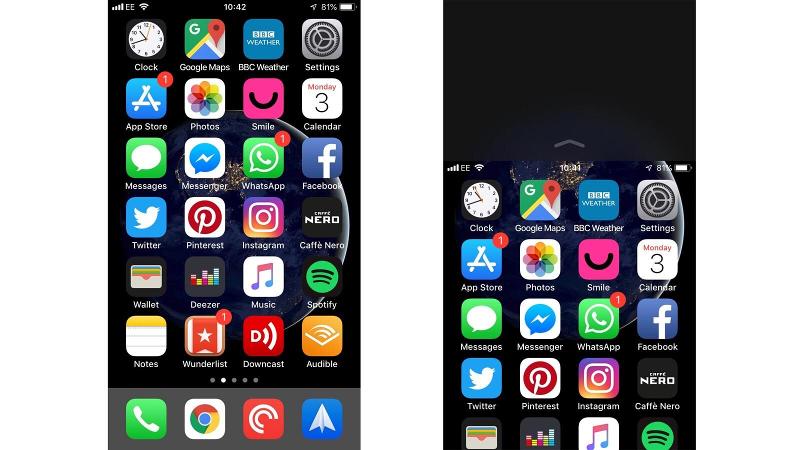 You can now tap the options in the upper part that would have been too hard to reach before. Doing this again returns the display to normal, or you can just slide up the arrow at the top instead.

Tap and hold (or long-press)

If you tap on the icon for one of your apps, after a couple of seconds you’ll see a little menu of quick options that varies from app to app – Twitter, for instance, will offer to let you write a new tweet there and then. But all apps will give three options: delete the app, share it, and Edit Home Screen.

Tap that last one and you’ll see all of the app icons begin to jiggle. You’ll also see that each icon now has a little X in the top left corner. If you want to delete one, then tap the X. Don’t worry if you accidentally tap the wrong one and delete it; they can all be downloaded again from the App Store and you shouldn’t lose any data.

To stop the jiggling, tap the Home button. 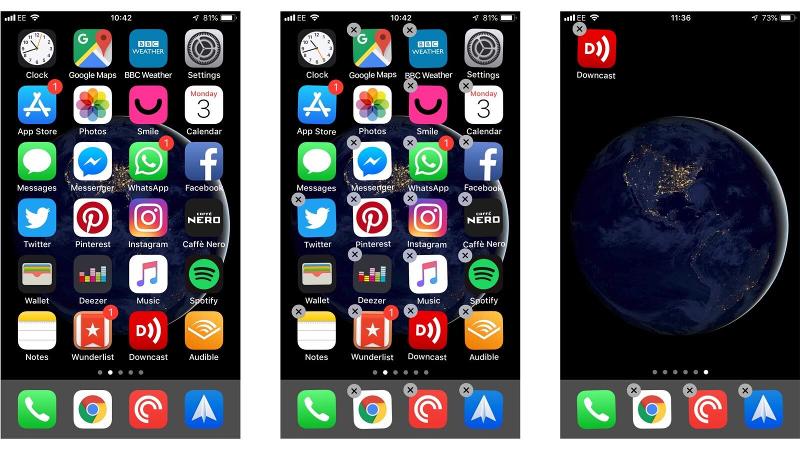 Apple does use the annoying software quirk of making all the apps shuffle around and line up, so if you try to place the icon at the bottom of an empty screen it will invariably jump back up to the top. Hopefully this will be addressed soon in a newer version of iOS, as it’s frankly a very silly way to behave.

Tap, hold and drag over other icons (creating folders)

One last thing about moving icons. If you drag one over a different icon and pause there, a folder will be created that will now contain both apps. This is useful if you want to group them together – putting all your music apps in one place, for example. 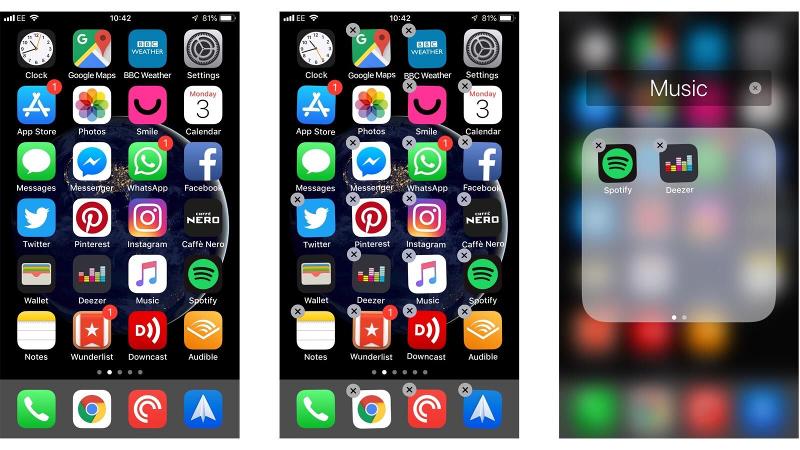 If you’re happy to do this then release the icon and it will drop into the folder. Otherwise just move the icon somewhere else and the folder will disappear.

Navigating through the iPhone pages will involve a lot of swiping. This is simply moving your finger along the screen either left, right, up or down, depending on which direction you want to go.

When most people start using a smartphone for the first time, the tendency is to swipe across the entire screen, but you only need to give the display a quick flick in the right direction and you’ll be moving through home screens or web pages with ease.

On the classic iPhones (the ones with the Home button) you’ll also find that swiping up from just below the display opens the Control Centre panel where you can change the brightness, volume, and various other functions.

Swiping down from just above the top of the display opens the Notifications panel where you can see any messages you’ve been sent or control music apps that are currently active. 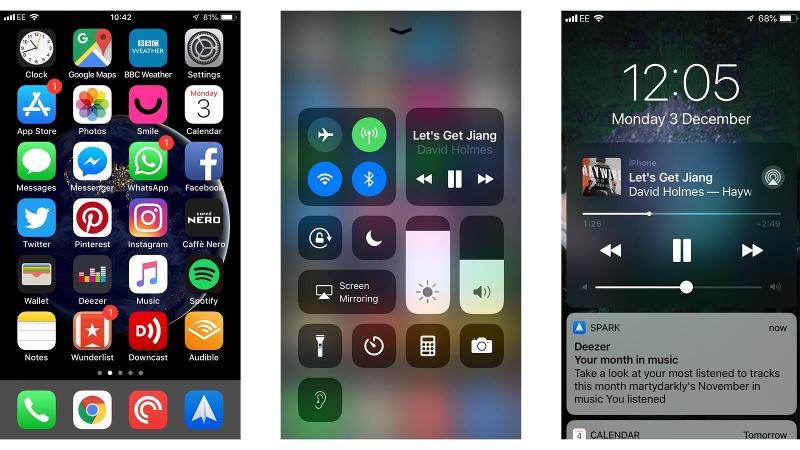 One of the other most common gestures is pinching. Technically, you’ll more likely use the opposite of a pinch most of the time, but it makes the description easier to understand.

Take two digits (usually your thumb and index finger) and place the tips together to make the OK sign. Now, with the tips of both fingers touching the screen, open them up while still keeping them in contact with the display. In essence you’re swiping in two opposite directions at once.

This is ‘unpinching’, and it works best on images, web pages or text. The result should be that the area of the display is expanded as the ‘camera’ zooms in.

Pinching, or repeating the process in reverse (bringing two fingertips closer together), will shrink things. All of this doesn’t affect the image/document/page itself, just your temporary view of it. 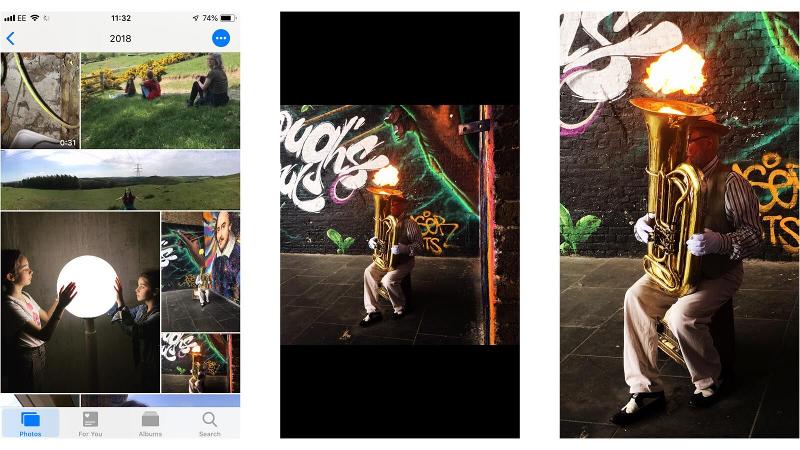 The last gesture you’ll need to know when first starting out is the one for rotating images. This is very similar to the pinching one described above, but instead of opening up your fingers, turn them in the direction you want the image to rotate. iOS will move them through four different 90-degree angles, and you can rotate in one direction then back the other way as much as you like.

So, there you go. A whistle-stop tour of the controls you’ll find useful when first starting out with your iPhone. For more helpful gestures, read our How to use 3D Touch on iPhone and How to use Siri Shortcuts guides.