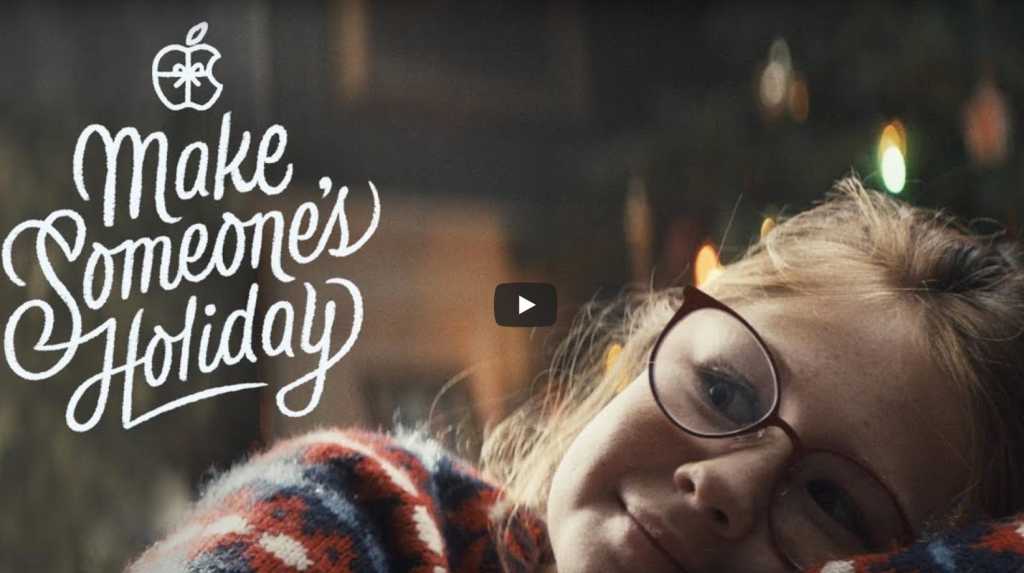 Have you seen this year’s Apple Christmas advert? If not be prepared with the tissues! The fact that you’ll recognise the music from the married life sequence at the beginning of Up should be warning enough – this is a real tearjerker!

As well as details of the latest Apple Christmas ad, we also have all the Apple Holiday ads from the past ten years for you to watch below. Enjoy reminiscing.

You can watch the ad, entitled Holiday – The Surprise, below, but here’s a summary. A family is heading to visit grandpa for Christmas and along the way the iPad comes in very handy for occupying the two daughters (we’re amazed that they don’t fight over it to be honest). Once at grandpa’s house it becomes apparent that their grandma has passed and he is very sad. So the girls make a Christmas slideshow on the iPad to remind him that his wife is always with him.

We initially watched thinking that there was rather a lot of shoving the iPad in front of the girls to keep them quiet, but under the circumstances we’d all be doing the same. And the ending is so touching that you’d have to be pretty tough not to shed a tear.

The track, which you no doubt recognise from Up, is Married Life by Michael Giacchino if you want to listen to on Apple Music, or buy it on iTunes.

Tissues at the ready – here is the ad:

Apple’s Christmas advert for 2018 stared an animated girl and her dog with a music track called Come Out and Play by California-based singer Billie Eilish. Eilish and her brother Finneas were commissioned to write the track for the Apple Holiday ad. You can listen to the track on Apple Music (or buy it on iTunes) here.

It’s probably not immediately apparent what message the ad is trying to get across. In fact, the only clue that it’s an Apple ad is fact that the girl uses a MacBook.

At the beginning of the ad we see her print something out and hide it in a box. The first hint at her creativity – and her insecurity about it – comes when we see her sculpt a dog’s face in dough before balling it up at the bakery where she works. Later on she closes the lid of her MacBook to avoid someone seeing what she is working on.

Lots of things are printed out and locked away in the box until the dog opens the window and causes all the pages to fly out and into what looks like a Parisian street below.

Finally, people see what the girl has produced and, following their acceptance, she gains the confidence to share her gifts.

The message of the advert is: ‘Share your gifts’. With gifts here meaning your creative abilities, rather than the traditional gifts we’d expect to hear about at this time of year.

Apple’s 2017 Christmas ad titled ‘Sway’ saw a woman choose the Sam Smith track Palace on her iPhone X, plug AirPods in her ears and dance her way into the arms of a man.

In 2016 Apple’s Christmas ad stared Frankenstein (Apple titled the ad ‘Frankenstein’, although, obviously it was referring to Frankenstein’s monster). The monster was seen venturing into town to celebrate Christmas, with the message at the heart of the ad being about acceptance.

For Apple’s 2015 Christmas commercial we saw Stevie Wonder use GarageBand on his MacBook to re-record his 1967 festive track Someday at Christmas with Andra Day.

In 2014 Apple’s Christmas ad, titled ‘The Song’ saw a girl create a duet of her accompanying her late grandfather for her grandmother to listen to.

And in 2013 we had ‘Misunderstood’ where a family gathered for Christmas. Everyone appears to be having fun while a teenage boy obsessively uses his iPhone. It turns out that he has been using the phone to make a movie of the celebrations.

In 2012, Apple’s Christmas commercial saw a FaceTime conversation between a girl and her grandfather.

FaceTime was also the star of Apple’s Christmas ad in 2010.

For a trip even further down memory lane, in 2009 the Apple Christmas Commercial saw an iPhone 3GS being used, showcasing just how easily Christmas could be managed on the device, in an ad titled ‘12 Days of Christmas’.

Want to see even more Apple ads from the past? You might like to read The 14 best Apple ads of all time.