It’s spring, which means it’s time for new iPads – and Apple has obliged by announced new iPad Air and iPad mini models for 2019. In this article we round up everything you need to know about the new (10.5in) iPad Air, including its release and onsale dates, tech specs, price and new features.

If you’d like to know about its smaller cousin, read our separate article about the iPad mini (2019). We also have a comparison of the iPad mini 2019 and iPad Air 2019. And for our thoughts on how this fits in with Apple’s tablet range, check our iPad buying guide and our roundup of the best iPad deals.

Apple quietly launched the iPad Air (2019) on 18 Mar 2019. There was no press event: the company simply closed its online store for a few hours, then sent out a press release when it reopened.

The onsale date was the same. The new iPad Air is available to buy immediately. You can already find cases for it – we’ve rounded up the best ones here.

Will Apple release another Air next year? We think so! Read more in our roundup of iPad Air 4 rumours.

The new iPad Air is priced midway between the Pro line (which are very expensive for all but the most demanding creative professionals) and the better-value options like the iPad 9.7in (2018). It’s available with 64GB or 256GB of storage – the former will be plenty for most people – and with cellular or Wi-Fi only.

This is how it compares with the 9.7in iPad from last year:

The iPad Air (2019) is available to buy now direct from Apple, while EE has announced it will be stocking it soon: you’ll be able to order from ee.co.uk later this week, and the iPad Air will arrive in EE stores on 26 March.

We expect additional third-party sellers to begin offering the new iPad Air over the coming days, including the following:

The branding of the new iPad was a much bigger surprise than its release schedule.

Apple previously sold two tablets under the Air brand, but the most recent, the iPad Air 2, was discontinued in 21 Mar 2017. It’s strange to see the company go back to a brand it seemed to have left behind, but also potentially confusing that it doesn’t call it the iPad Air 3 – there has already been an iPad Air.

For clarity we’ll refer to the new iPad with its year of release – as “iPad Air (2019)” – even though Apple doesn’t do this. 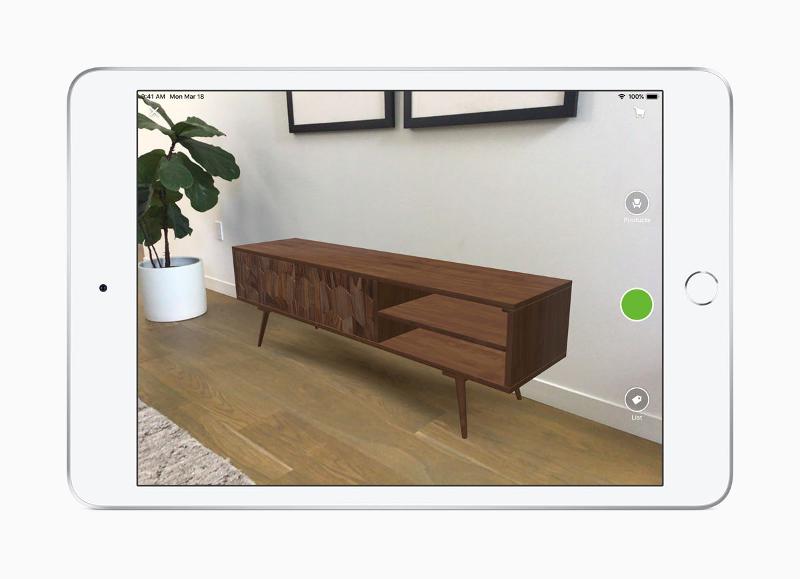 There’s two main takeaways here: Apple hasn’t got rid of the Home button, but it has increased the size of the screen. We’re up to 10.5in now, as compared to the 11in that was possible on the Home-button-less Pro.

This too is what we expected. Partly because some people love the Home button, but more importantly because the Pros need to stay special.

Apple has also seen fit to include a laminated screen, which is great news (and to be expected, given the higher price tag). That cheap-feeling, slightly flexible display was the main negative cited in our reviews of the 2017 and 2018 models.

Finally, despite Apple’s (pretty accurate) description of the new Air as “ultra-thin”, you should note that it’s actually a shade thicker than the 11in iPad Pro, which is only 5.9mm. The new iPad is 6.1mm thick. 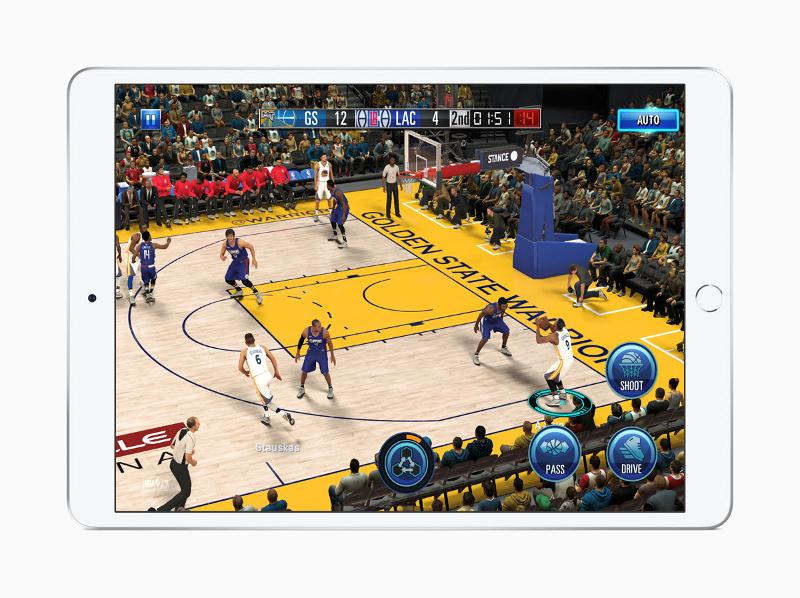 Aside from having a bigger screen, what can the new iPad Air do that its predecessor can’t? Let’s check out its features list.

This is an obvious place to start. The company finally allowed the Apple Pencil to play with a non-Pro iPad in 2018… and then roughly six months later it announced a second-gen Pencil that returned to Pro exclusivity.

So it’s mildly disappointing, albeit probably to be expected, that the 2019 iPad Air works with the original Pencil, but not the new Pencil.

It’s important, after all, for Apple to keep some things exclusive to the Pro line-up, and the brilliant new Pencil (which attaches magnetically and charges wirelessly, whereas its predecessor attached precariously and charged stupidly) is a big reason to pay extra. 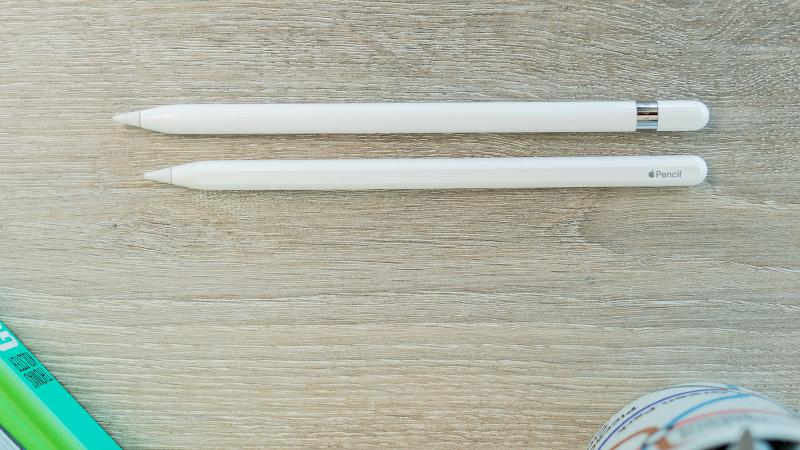 The new iPad Air also offers Smart Keyboard support: it has a Smart Connector on the lefthand edge. Unlike the Pencil support, this is a new feature, since the iPad 9.7in (2018) didn’t have a Smart Connector.

Mind you, the Smart Keyboard for the 9.7in iPad Pro had its issues – our review gave it three stars out of five and pointed out that “typing on it is in our experience slower and less accurate than on a full-size keyboard.” To an extent that is inevitable with mini keyboards of this size. 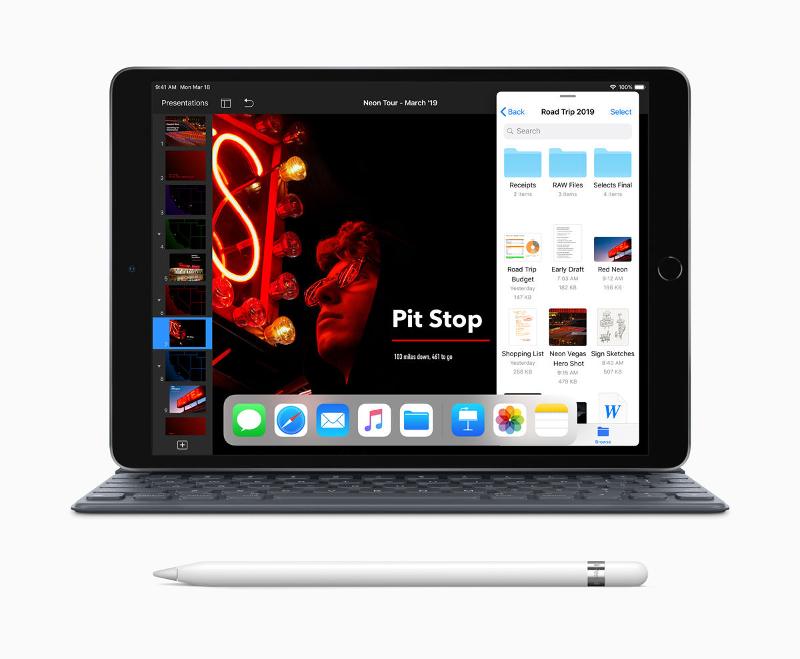 The Air 2019 needs to show enough improvements on the 2017 and 2018 specs to persuade people to buy or upgrade, but it can’t get too close to the spec of the (much more expensive) iPad Pros or it will cannibalise the higher-margin sales.

Within those boundaries, where has Apple pitched the new iPad in terms of specs?

The processor is the A12 Bionic – not quite top of the range, but a surprisingly powerful inclusion which Apple says will offer a 70 percent speed boost compared to the iPad 9.7in (2018). Following on from the 2018 model’s A10 processor chip, we thought the 2019 model was likely to get an A11, which would offer a speed bump without threatening the A12X-equipped Pros. (The A12X is a souped-up version of the A12.)

Apple doesn’t officially announce the RAM allocation, but teardowns reveal that this has been bumped to 3GB, from 2GB on the 2018 model. We also know that Apple has doubled its storage tiers, up from 32GB and 128GB on the iPad 9.7in (2018) to 64GB and 256GB.

The display is no sharper than before – like the 2018 iPad and iPad Pros alike, the new iPad Air has a 264ppi pixel density. But because the screen is larger, the device obviously needs more pixels to achieve the same standard of sharpness. The resolution has consequently gone up from 2048 × 1536 to a new 2224 x 1668.

There’s no sign of the ProMotion tech which we get on the Pro models – this selectively adjusts screen refresh rate up to 120Hz depending on what you’re doing, in order to preserve battery life.

Bluetooth has been bumped from version 4.2 to 5, and the new models support gigabit class LTE and eSims.

As we (and everyone else) predicted, Apple has sensibly declined to replace the Lightning port with USB-C, as it did on the 2018 Pro models, since that was done specifically to cater for artists and creative professionals who are the iPad Pro’s target market. Finally, we’re very pleased to report that the headphone jack has survived!