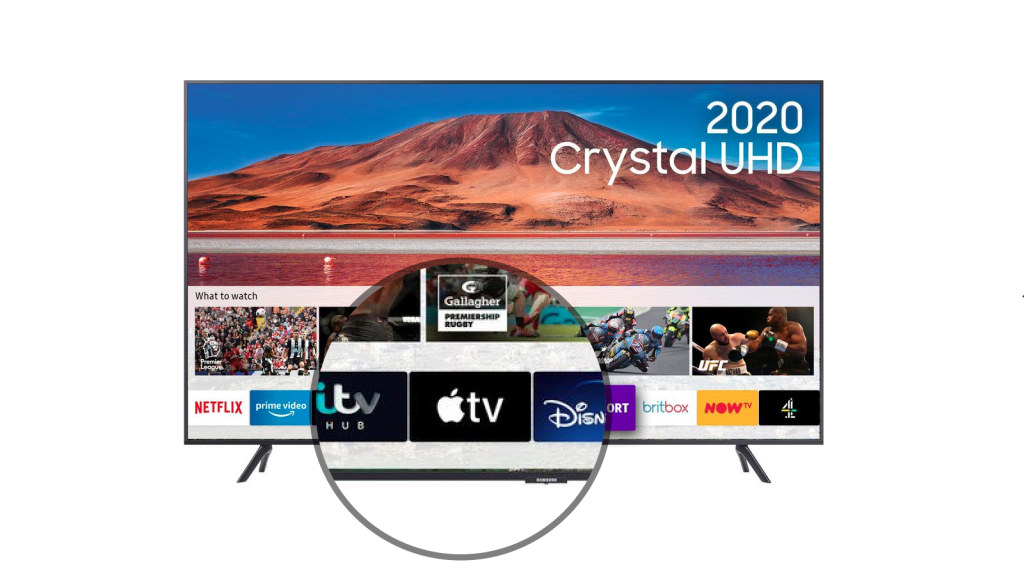 If you’re wondering how to watch Apple’s TV+ streaming service on the TV in your living room, or looking for a way to stream from your iPhone or iPad to the big screen, look no further. In this article we run through all the Samsung, Sony, LG and Vizio TVs that have the Apple TV app built in, as well as the TVs that are compatible with AirPlay and AirPlay 2 – the proprietary wireless standards for sharing videos, photos and music from an Apple device to a TV screen or speaker.

We’ll also discuss how you can now use a Roku, Amazon Fire TV or Google Chromecast to access Apple TV+ content. And the  game consoles Xbox Series X and Series S that launched in November 2020 also include the Apple TV app, as does the PlayStation 5.

Apple’s TV+ streaming service features shows from the likes of Jennifer Aniston, Reese Witherspoon, Steven Spielberg and JJ Abrams, and the content is available (along with paid-for content from Apple’s iTunes store and various other services) via Apple’s TV app. We have a separate guide to what’s on Apple TV+. We also look into what you can watch for free on Apple TV.

If you subscribe to Apple TV+ (which costs £4.99/$4.99 a month) you will be able to watch the new Apple shows on Apple devices or on a TV if you have an Apple TV set-top box, Roku, Amazon Fire TV, Google Chromecast, or one of the following smart TVs. Read How to get Apple TV for free.

Which TVs have Apple TV built in?

There are lots of options that will allow you to stream Apple’s content to your TV screen without buying the Apple TV hardware. The list of TVs that offer support for the Apple TV app is ever growing.

Previously, if you wanted to watch content streamed from your iPhone, iPad or Mac, or films and TV shows rented or purchased from Apple’s iTunes Store, on your television you needed an Apple TV set-top box plugged in.

With the price of an Apple TV starting at £139/$149, that was a high price to pay. Luckily you no longer need to have an Apple TV plugged into your set to be able to watch TV shows and movies from Apple or stream TV+ content.

Apple now allow its TV app to be offered on certain brands of smart TV and streaming sticks. So far the list includes smart TVs from the following manufacturers (click on the link to jump to a list of supported TVs):

There are also some Roku-branded TVs that support Apple TV. Such as the TCL Roku TV 32in, the Hisense Roku TV 43in 4K Ultra HD with HDR.

We’ll run through the various TV sets and streaming sticks that offer the TV app in more detail below, but first we’ll look at some other, cheaper, options.

Which streaming devices include the Apple TV app?

You don’t have to spend a fortune on a smart TV or an Apple TV set top box though. You could choose from one of the cheaper streaming sticks available from Roku, Amazon or Google.

The TV app is also available on streaming players from:

Which games consoles include the Apple TV app?

The TV app is also available on the new Xbox consoles and the PlayStation 5:

Which TVs are compatible with AirPlay?

In addition to TVs with the Apple TV app installed, many smart TVs now work with AirPlay 2 – which will enable you to stream content from your iPhone, iPad or Mac to the TV screen without needing the Apple TV app. In that case TVs from the following manufacturers are included: 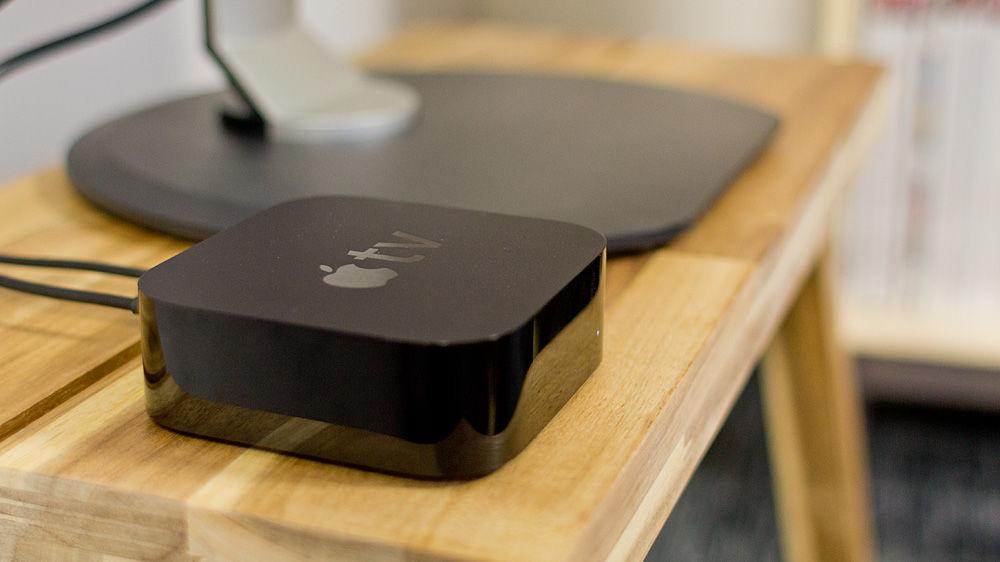 Which Rokus have Apple TV?

The Apple TV app arrived on Roku devices in October 2019. The TV app is available to download for free from Roku’s Channel Store. As well as access to Apple’s streaming service, the app also offers access to the iTunes Store and any Channels you might want to subscribe to via the app.

Note that the app isn’t available on some older Roku models.

The 4K model is normally £49.99 and available from the likes of Currys PC World, but you may find a bigger discount on Amazon

Which Google Chromecasts have Apple TV?

The Apple TV app is available on the £59/$50 Chromecast that includes Google TV.

Amazon might be a competitor when it comes to content streaming, but Apple is putting the Apple TV app on Fire TV sticks. That’s probably a good move on Apple’s part.

If you already own a Fire TV, or if you were thinking of buying one, you will find the Apple TV app available as a download from the Amazon’s Apps and Games store.

Which Samsung TVs have Apple TV?

At the beginning of January 2019 Samsung announced that it would start offering “Apple iTunes Movies and TV Shows” on its new TVs and some 2018 Samsung TVs (via a firmware update). In addition, Samsung announced support for AirPlay 2.

The following Samsung TVs feature the TV app and work with AirPlay 2:

And these Samsung TVs offer AirPlay 2: 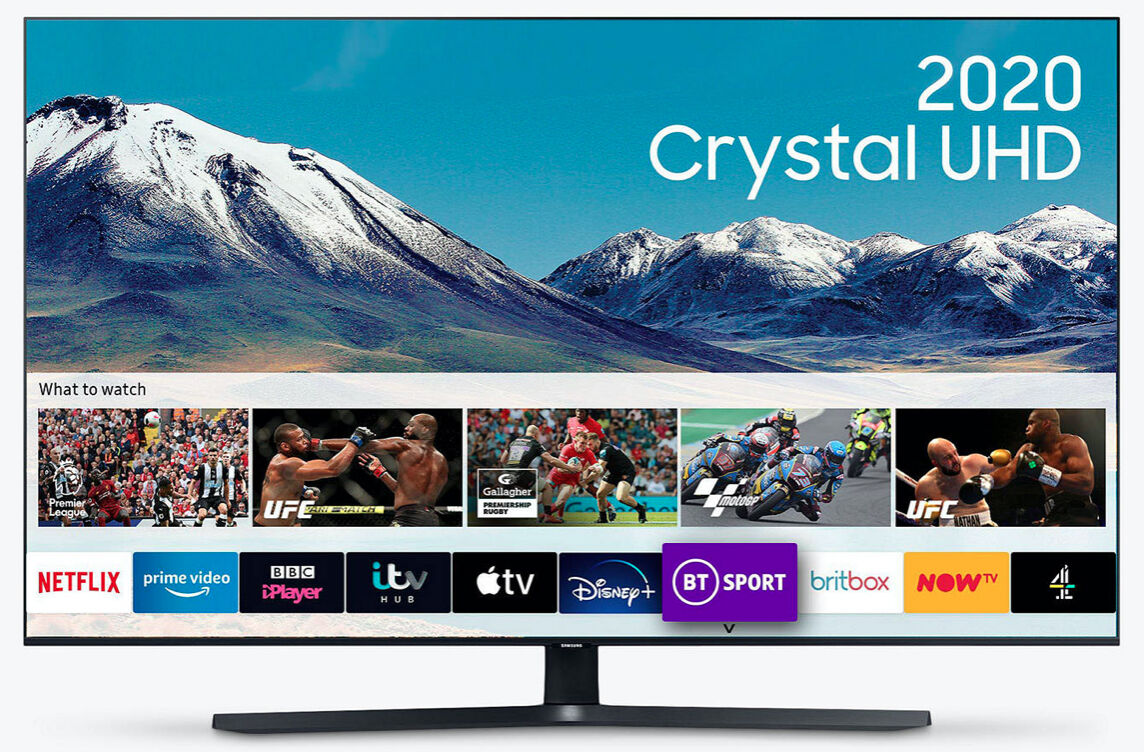 LG has confirmed that the Apple TV app is offered on the following TVs: 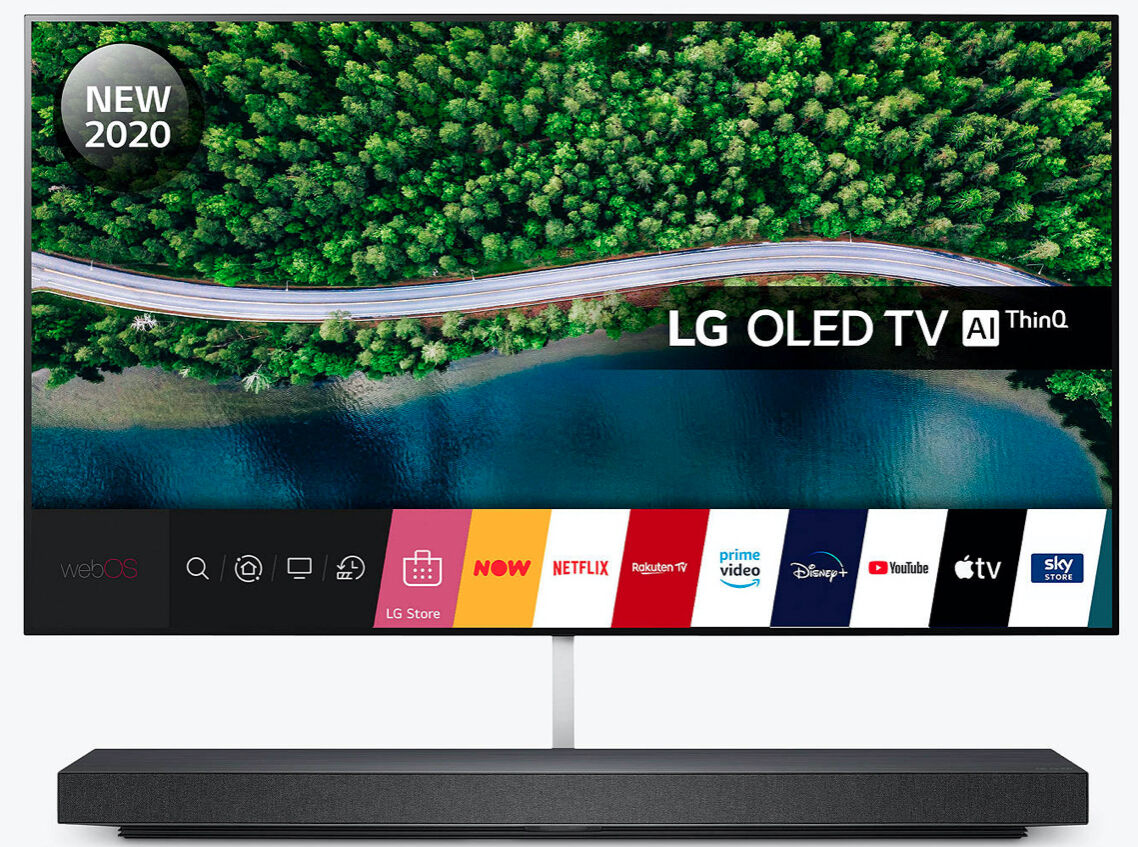 On Monday 7 January 2019, Sony announced that it would be offering AirPlay 2 on some of its TVs launching later in 2019. When the company made its announcement that January wasn’t clear whether Sony was planning to only add AirPlay 2 support for streaming from Apple devices, rather than offer a shortcut to iTunes (this was before Apple TV+ launched).

Apple later indicated at its 25 March 2019 event that the Apple TV app would be available on Sony platforms “Later this year”, and yet, it took until November 2020 before any Sony TVs offered the TV App. It certainly seemed that Sony favoured Android TV.

These are the supported Sony TVs:

Even more Sony TVs work with AirPlay 2 – so you’ll be able to stream the content from your iPhone, iPad or Mac to one of these Sony TVs.

If your Sony TV has AirPlay 2 support you will be able to stream content from your Apple device to the TV, without requiring an Apple TV.

Sony also announced that its TVs work with HomeKit.

Vizio (a US brand) has also confirmed that its TVs will support AirPlay 2.

If you’re wondering whether you can buy a Vizio TV in the UK, though, the answer is probably not, since they only sell in the US and aren’t designed for our market.

Apple has a web page detailing the TVs that support Apple’s services.

Our colleagues at Tech Advisor have reviews of the best smart TVs.

What Apple products can you watch Apple TV+ on?

The TV sets and streaming sticks above join the following Apple products that include the Apple TV app.

You can use the TV app on your iPhone to search for content, see recommendations, and jump straight to your Up Next list. However, when you choose what you want to watch you will usually be sent to the corresponding app to watch it, be it Netflix, Prime, iPlayer and so on. However, some third-party subscription content might be integrated into the Apple TV app so you won’t have to leave the app to watch it.

In addition, if you subscribe to Apple’s TV+ service, you will be able to watch and download all of Apple’s original content on to your iPhone. 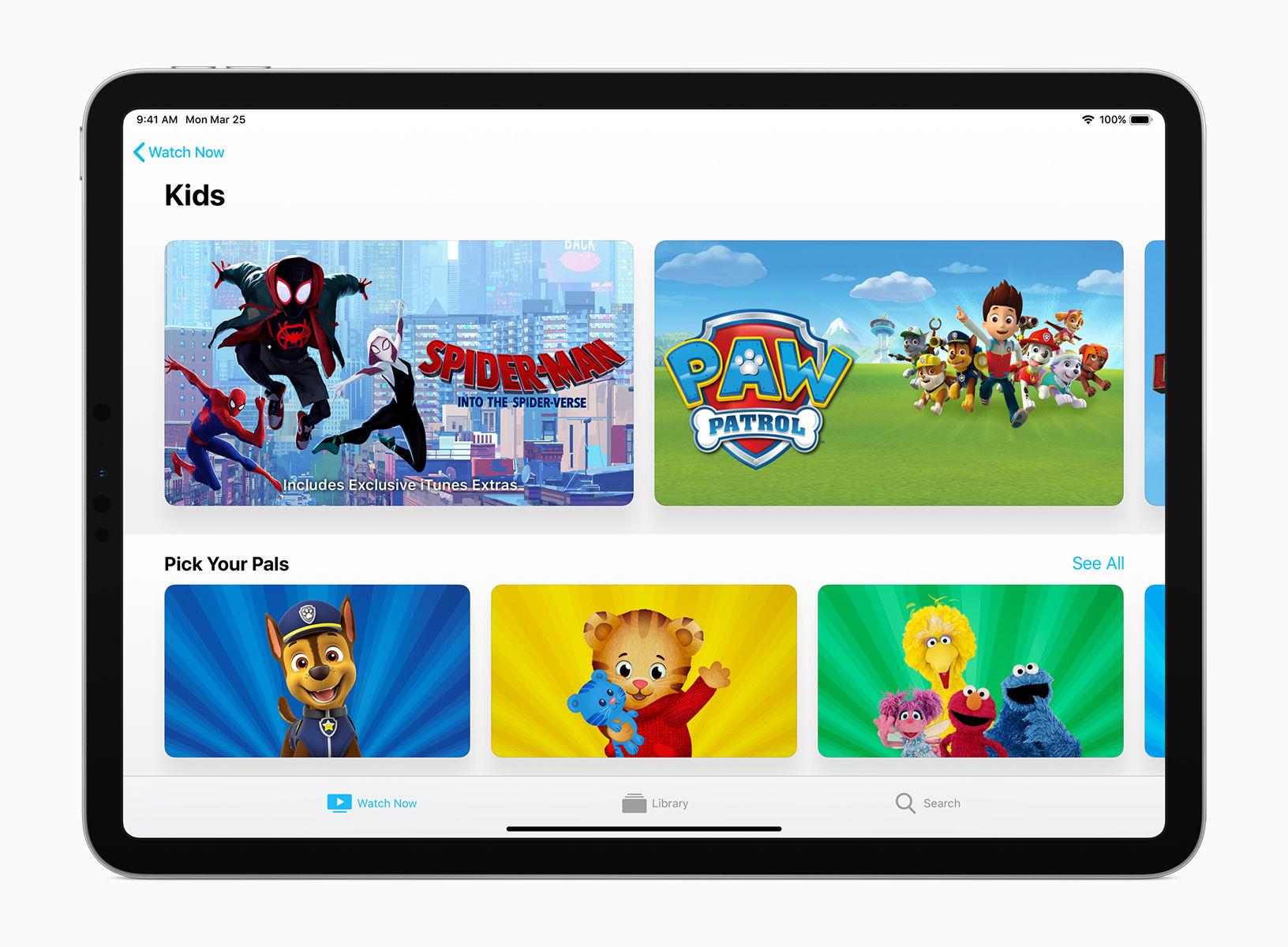 It always struck us as odd that the TV app wasn’t available on Mac. Especially since many years ago the Mac specific Front Row software was a precursor to the TV app we know today.

Apple’s TV app finally arrived on the Mac with macOS Catalina in October 2019. With Catalina installed, you can watch any content available via the TV app on a Mac, including TV+ shows and movies.

One of the new features coming in iOS 15, PadOS 15 and Monterey will allow you to use AirPlay to send content to your Mac from an iPhone, iPad, or another Mac.

As long as your Apple TV box features the App Store (that’s either an Apple TV 4, Apple TV HD, or Apple TV 4K gen 1 or gen 2), you can use the TV app to search for content to watch. As with the iPhone and iPad, you are then kicked out of the TV app to watch content in the relevant On Demand app (which you need to find on the Apple TV App Store).

Apple TV owners who subscribe to TV+ are able to watch all the new content on their TV screen.