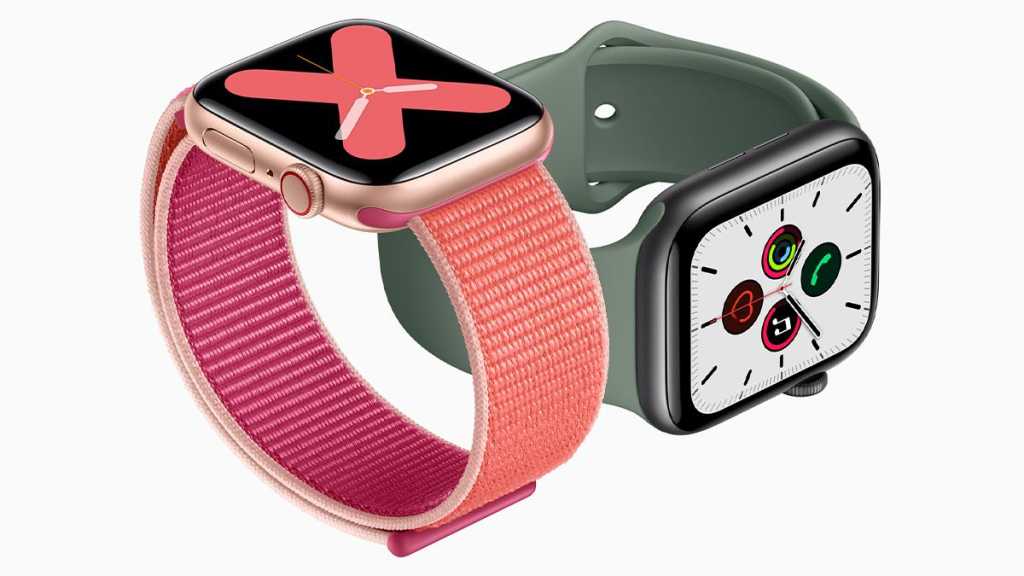 The Apple Watch Series 4 was a major step forward for the industry-dominating wearable. Faster, slimmer and larger-screened than its predecessors, it also added new health features such as fall detection and improved heart sensors and an ECG.

With Apple’s September 10th Special Event now out of the way, however, we bid farewell to the Series 4’s presence on the company’s store shelves as it’s replaced by the new Apple Watch Series 5. We have the launch date, the pricing, all the new hardware features and watchOS 6 built-in, with the details down below.

There was still no mention of  over-the-air watchOS updates or a switch to micro-LED, rather than OLED displays – but such an omission isn’t all that surprising, considering such a change is, in truth, not expected to arrive until 2020.

The Apple Watch Series 5 is available to pre-order at 1pm (UK time) on 13 September and is then released a week later on 20 September.

It’s available “in the US, Puerto Rico, the US Virgin Islands and 38 other countries and regions.”

Apple went a bit wild for the launch of its 2019 wearable, producing a cornucopia of new finishes that the Series 5 can be had in – more than any previous generation of Apple Watch.

As such, each material choice comes with its own price tag, with the (now 100%-recycled) aluminium casing models starting things off at £399/$399. 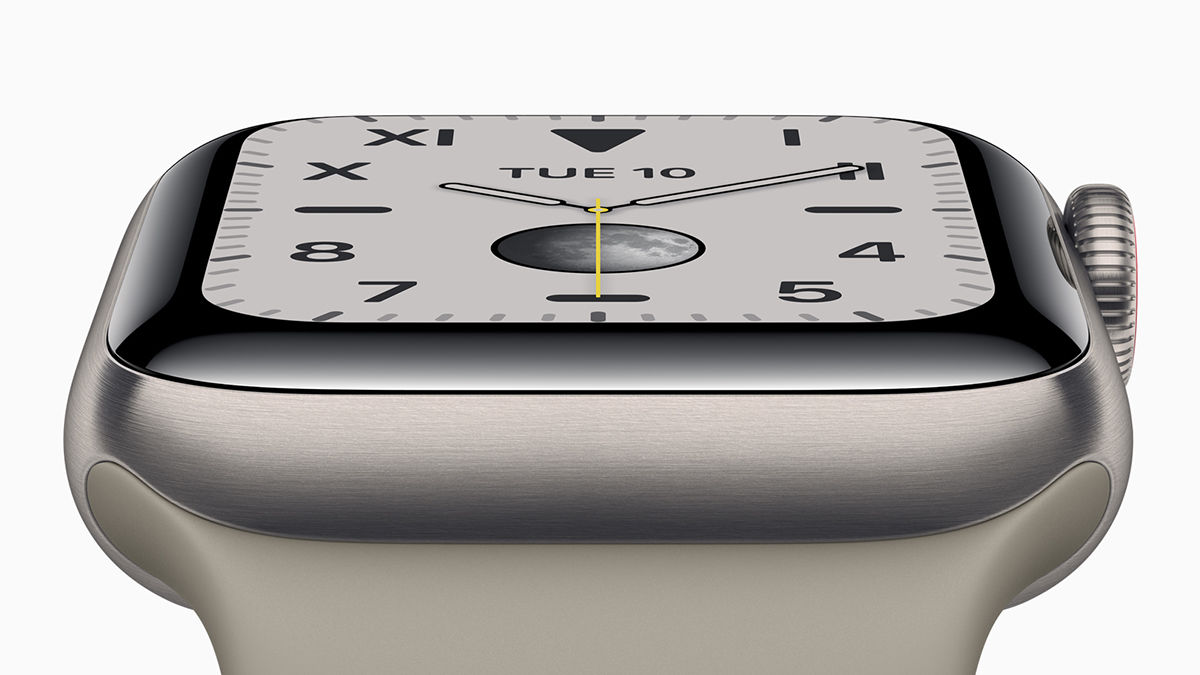 Series 5 also sees the reintroduction of a white ceramic-bodied Apple Watch, which will set you back at least £1,299/$1,299, alongside a new titanium-bodied model, which appears in both a brushed silver guise and a brushed space black variant, complete with a “diamond-like coating.” Prices for these new SKUs start at £799/$799.

Most people outside the Apple journalism bubble would say that the Series 4 looked exactly like the previous three Apple Watches, and it’s hard to argue – the overall design language, the curves and edges, the proportions, are were close to or the same as before.

However, in a world of barely noticeable iterative updates (and following three models that really did look exactly the same), we can recognise that the Series 4’s design changes were comparatively radical – design changes that are echoed in Series 5, albeit with the aforementioned new finishes, too. 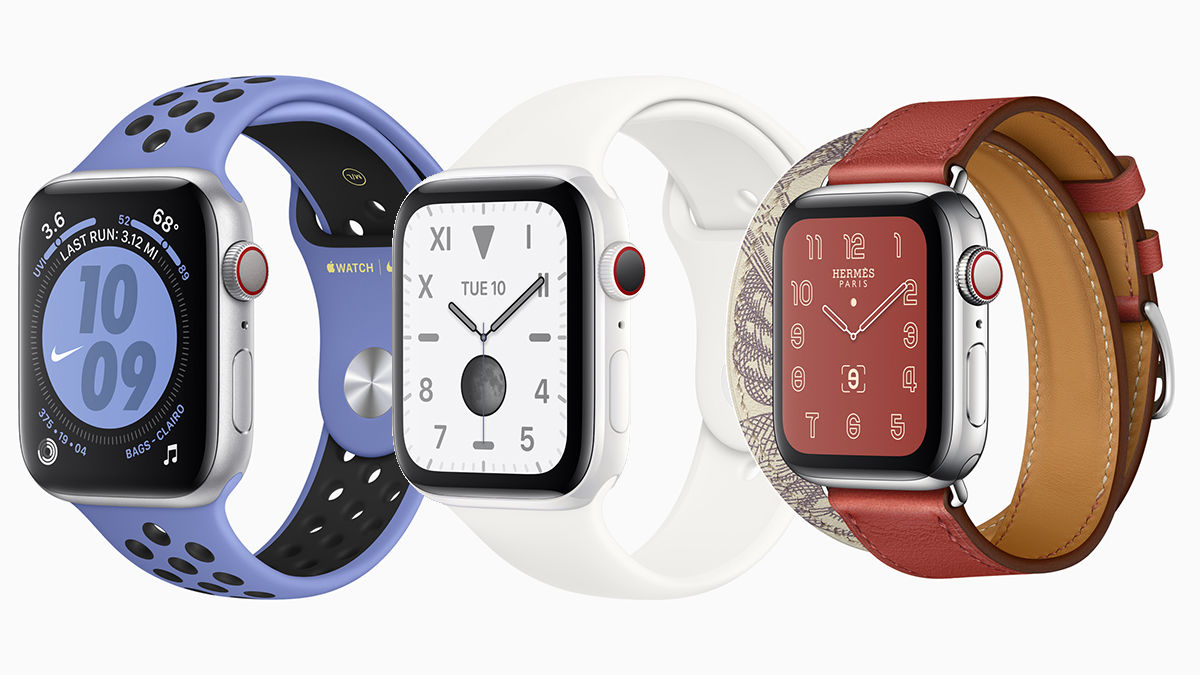 Essentially the screen is bigger but flatter (compared to Series 3 and earlier) and you get significantly more screen real estate without having to carry any extra bulk on your wrist. Okay, it’s not quite up there with switching to a round display but we take what we can get.

So much for the looks of the new Series 5, what’s changed under the surface?

At launch, Apple made no mention of the anticipated S5 processor that’s potentially powering its latest smartwatch. Instead, the company drew the audience’s attention to a new display driver, ambient light sensor and integrated power management circuit, all of which work in concert to help support the Series 5’s next new headline feature…

When previously the Apple Watch’s display would simply switch off when it was by your side, or you had your hand in your pocket, for example, the Series 5’s display setup means you can now glance at your chosen face without having to initiate the raise-to-wake gesture.

The company’s use-cases for the new feature included working out – with useful metrics available instantly, even if you’re not in a position to pull off the raise-to-wake motion. Apple’s also ensured that most, if not all of its current watch face lineup support this new always-on panel.

We know that Apple is pondering a long-term switch from the current OLED technology to micro-LED, which is thin and reliable, and consumes less power than OLED (and would help with battery life, which we discuss next). Sources in the supply chain indicate that it was still too early to expect this switch in time for Series 5 but the idea still has legs for next year’s Apple Watch.

The Chinese-language website  Economic Daily News claims Apple is close to signing a deal with two suppliers that will enable the 2020 Apple Watches to come with micro-LED displays. One of these companies, Sui Bao, told the site that its micro-LED module production line is ready and that it is “indeed in contact with the US smartwatch industry”. The company indicates that it could enter mass production in Q4 of this year, with the products appearing in 2020.

Onboard storage was upgraded relatively recently (16GB was introduced on the Series 3 for cellular models only, and included across all Series 4 models; all previous editions came with 8GB) and tends to be a low priority for wearables. For these reasons, while Apple hasn’t explicitly said, we suspect the Series 5 again comes with 16GB.

We’ve noticed a gradual falling-off in battery performance since the Series 2. Each generation since then has, in our subjective tests, lasted a little less time between charges than the model before – the result of more powerful chips, bigger screens and a lack of extra space for larger battery cells.

Apple quotes 18-hours of use from the Series 5, which it considers “all-day battery life” – just as it did with the Series 4, we’ll be able to gauge whether that new integrated power management circuit brings any noticeable benefits to longevity.

In terms of new health features, atop the various inclusions that we’ve already seen watchOS 6 is bringing to the table, such as cycle tracking and hearing health, Apple only really touched on the subject in the context of studies it’s conducting in partnership with various academic and medical bodies.

Apple Watch users, not just those sporting a new Series 5, will be able to contribute data towards studies aimed at hearing health, women’s mobility and heart health, respectively by way of the new Apple Research app.

Orienteerers will appreciate the addition of a new compass as part of the Series 5’s makeup, which can be accessed by way of a watch face complication, as well as a dedicated app. The experience also provides the user with additional location data, such as heading, incline, latitude, longitude and current elevation.

Third-parties will also be able to use the new hardware within their watchOS experiences.

While the cellular Apple Watch models have been able to contact the emergency services phone-free for some time, Series 5 affords users international emergency calling, meaning their watches can connect to the respective emergency services, no matter where they are in the world. The feature also works with fall detection, which was introduced on the Series 4.

The Apple Watch Series 5 will come with watchOS 6 pre-installed. watchOS 6 features a raft of new features, including an on-device app store for the first time, an app that measures ambient noise levels to protect your hearing, and long-term Activity trends.

This software update was demonstrated on 3 June and is currently available as a beta for developers. The final public version of the software will be released to coincide with the launch of the Series 5 in late September.

That’s not the end of the story, however. Even the Apple Watch Series 1 from 2016 can install watchOS 6, so it’s reasonable to expect three or more years of software support.