With manufacturers including Samsung, Huawei, Xiaomi, LG, Lenovo and Motorola unveiling foldable phones over the past couple of years, customers have looked to Apple for its response. But will there ever be a foldable iPhone?

It looks likely – although Apple probably won’t get there as soon as those other smartphone companies. Apple has filed for patents relating to foldable devices, has apparently secured provision of the bendy displays, and is believed to have run tests of its own – but the company isn’t expected to unveil a folding iPhone until 2022, if not later.

In this article we look at when and if Apple will launch a foldable iPhone, and whether it should jump on that bandwagon or focus on other features that people want. For more general predictions about Apple’s phone plans, visit our iPhone 13 news hub, and take a look at Best iPhone deals for buying advice related to the current range.

It looks like the foldable iPhone will launch in late 2022, at the earliest.

In fact, prolific Apple leaker Jon Prosser believes that we will not see the foldable iPhone in 2022.

But Apple products tend to rise to the top of the field because the company waits and then refines the product to create something more intuitive and superior to the competition. Apple’s strategy is to be the best, not the first.

What we do know is that Apple is working on such a phone, even if it won’t be launched in the near future. Back in June 2020 sources reported that the foldable iPhone was at the prototype stage, then in January 2021 it emerged that Apple had developed several prototypes of a foldable iPhone.

The company is said to have taken inspiration from two Samsung phones for the prototypes with one similar to the Galaxy Z Flip (folding widthwise) the other like the Galaxy Z Fold (folding legthwise). However, according to Prosser’s sources Apple has decided to focus the majority of resources on the Flip-style iPhone.

It’s not clear how far along these prototypes are though. In January 2021 it was suggested that the prototypes were of the screens alone and that Apple did not yet have full handset prototypes.

Whether there will ever be a Flip iPhone remains to be seen. Apple “hasn’t solidified plans to actually launch” a folding iPhone, Bloomberg’s Mark Gurman reported in January 2021. However, reports that Apple is designing a folding iPhone have been ongoing with a number of analysts going on record with their predictions that Apple will release a folding iPhone at some point in the future.

For example, back in 2018 analysts at Bank of America Merrill Lynch claimed that Apple was working on a foldable iPhone to be released within two years.

Citing various Apple suppliers, analyst Wamsi Mohan said: “Our checks also suggest that Apple is working with suppliers on a foldable phone (that potentially could double up as a tablet) for launch in 2020,” as reported by CNBC back in March 2018.

Mohan made his claims after meeting several Apple suppliers in Asia.

Why should Apple make a foldable iPhone?

One reason why a foldable iPhone could be a good thing is perfectly illustrated by this concept illustration made by Dutch industrial designer Roy Gilsing on behalf of Foldable Phone News. 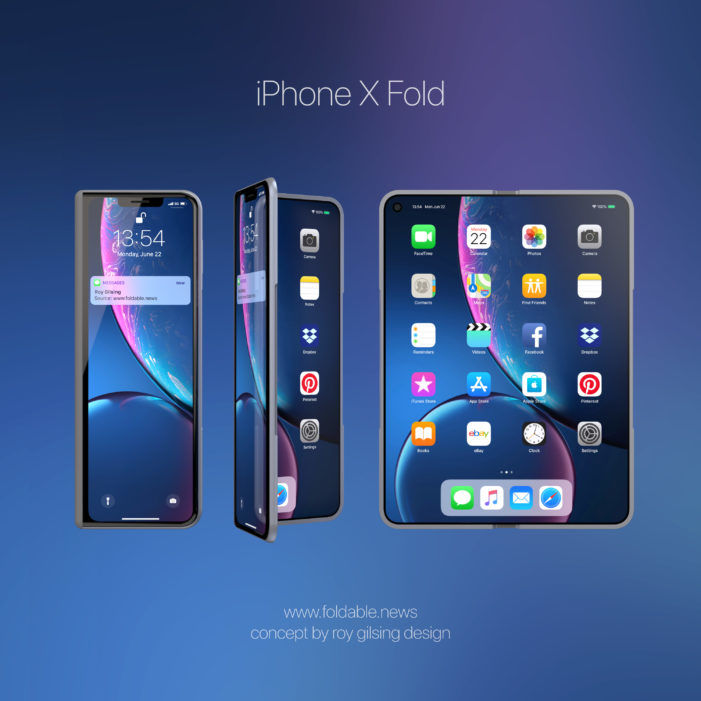 Those images perfectly illustrate how an iPhone could be unfolded to become, in effect, an iPad. Of course, the question is whether anyone would really want an iPhone that could transform into an iPad.

Would such a device encourage more people to purchase an iPhone, or would the price be prohibitive? Would those of us who own both an iPhone and iPad prefer it if they were combined into a single device? Would the device cannibalise iPad sales? These are complex and potentially troubling questions, and we’re not totally sold on the idea.

But this hasn’t stopped Apple’s competition from jumping on the foldable phones bandwagon. Samsung and Lenovo demoed phones with foldable screens as early as spring 2018… although the Samsung Fold famously developed a fault and has been recalled. Remember, kids: it isn’t always cool to be first to market.

And Ed Hardy, writing for Cult of Mac, believes that if anyone can make the folding smartphone work, it’s Apple. “Deciding today you don’t want a folding iPhone based on the high prices and clunky designs of the first foldable Android models is the equivalent of someone in 1886 stating they’ll never get an automobile after looking at the Benz Patent-Motorwagen,” he writes.

Evidence for a foldable iPhone

Whether a foldable iPhone is a good or a bad idea, there’s no escaping the fact that Apple has at least considered it – as shown by the evidence gathered in this section.

The foldable iPhone rumour isn’t new. It’s been ongoing since 2016 when it emerged that Apple had placed an order with LG for its folding OLEDs.

Citing anonymous industry sources, The Bell, via The Investor, claimed in October 2017 that LG was working on a foldable iPhone with Apple. According to that report, foldable iPhone production was expected to start in 2019.

An ET News report in December 2016 seemed to back this up. Apparently, LG was going to start mass-producing the screens in 2018 and would be supplying them to Apple, Google, and Microsoft.

Another report on 2 March 2019 claimed that Samsung Display was in negotiations with Apple with a view to supplying the company with foldable displays to be used for an iPad/Phone hybrid. Samsung is said to have provided 7.2in displays to Apple. The company already provides the OLEDs used for the iPhone XS and XS Max.

Finally, in September 2020, the Apple leaker Ice Universe claimed Apple had ordered a large number of foldable displays from Samsung.

On 22 April 2019, supply chain sources claimed (Chinese-language site) that Apple has “quietly” been testing a folding screen by BOE Display (a firm which had previously been considered as an iPhone supplier). Before that the company tested folding screens by Samsung, the site adds.

“All of which suggests that Apple intends to launch a folding screen iPhone,” says the report, “but certainly not this year.”

Tests appear to be ongoing; in January 2021 sources said two prototypes of a foldable iPhone had passed Apple’s durability tests.

There’s also the fact that Apple has patents, and has made additional patent applications, for flexible display devices. 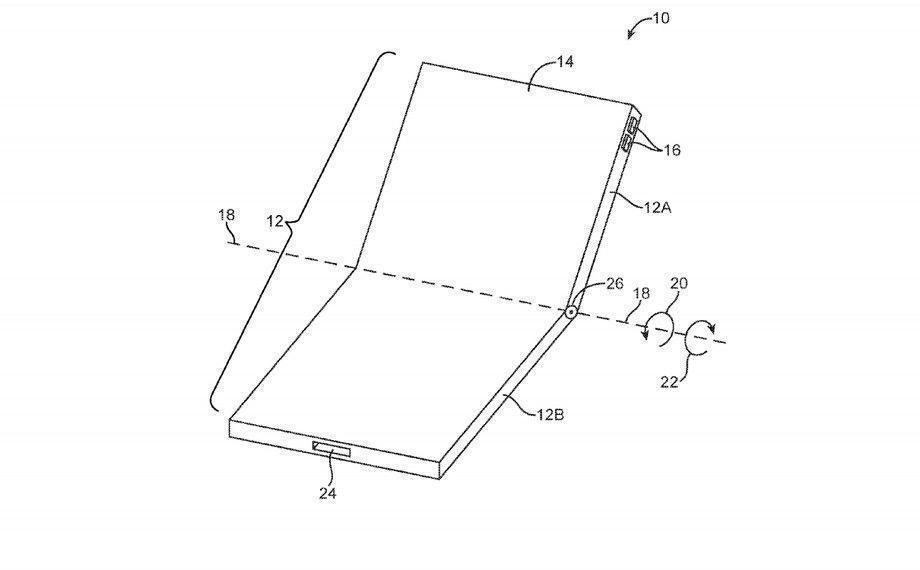 A patent for “Flexible display devices” was filed in October 2018 and published in February 2019. The patent application includes lots of illustrations, such as the one below.

There is also a separate 2016 patent for a bendable iPhone, shown below (patent 9,947,882). It’s described thus: “An electronic device, comprising: a housing that bends about a bend axis; and a display in the housing that bends about the bend axis, wherein the display comprises a protective layer having a rigid portion formed from a first material and a flexible portion formed from a second material that is different than the first material”. More information here.

Most recently, an Apple patent has emerged which details a method to avoid damaging screens when they bend. The patent, for “Electronic Devices With Flexible Displays”, states that damage is sustained under cold conditions, so offers a solution: “The portion of the display that overlaps the bend axis may be self-heated by illuminating pixels.”

Of course, just because Apple has all these patents it doesn’t mean they will ever be used in a real product. Equally, they could be applied to a totally different product. Patent analysis is not an exact science.

Well-known Apple leaker Jon Prosser’s sources have indicated that the foldable iPhone will come in ” fun colours“, like the iPhone XR and iPhone 12.

This suggests that it will be targetted at the general consumer, rather than someone looking for a more high-end phone. Currently Apple distinguishes  between the Pro iPhone handsets and consumer models by choosing metalic finishes for the more expensive and feature heavy models, while the lower-priced, more basic iPhones come in bright colours.

Along with the images we mentioned earlier, created by Roy Gilsing, there are also a collection of images created by the LetsGoDigital website, and an Apple-style promotional video that has been created that imagines what the new device might look like and how it could work.

Obviously these are just the imaginings of designers or fans. But that doesn’t mean that Apple wouldn’t create something along these lines.

The LetsGoDigital images show a smaller iPhone-sized device that folds in half. We’re not really sure what the point of such a device would be, though. 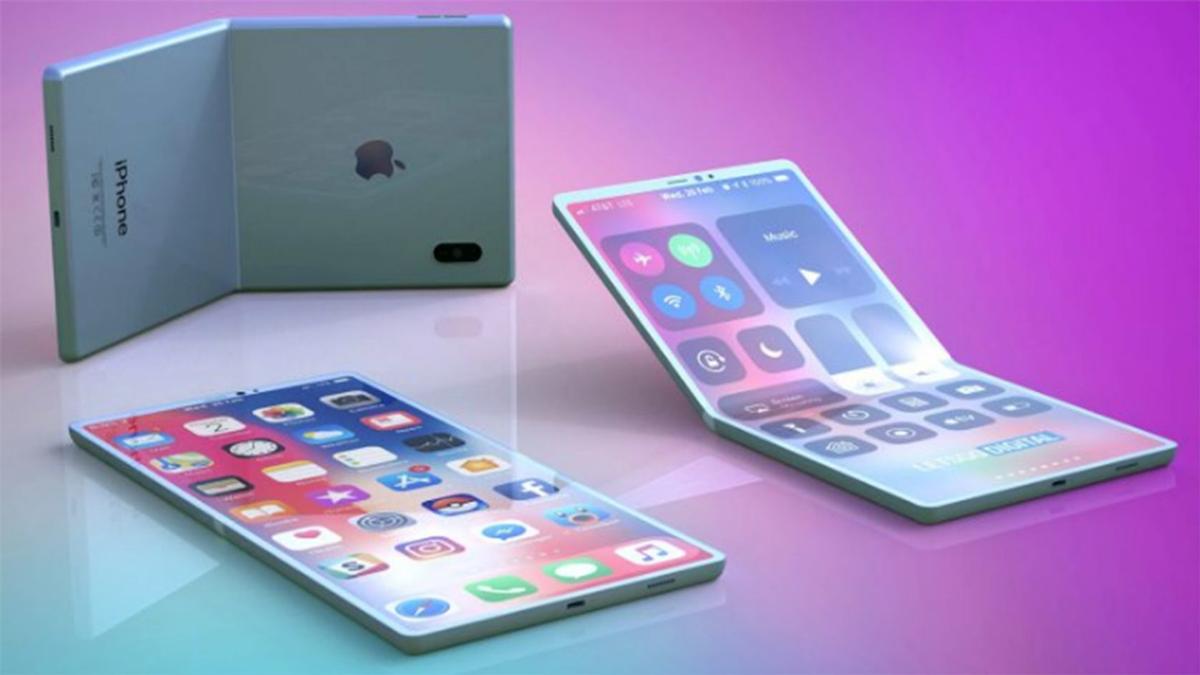 Here’s another image by Roy Gilsing for Foldable News: 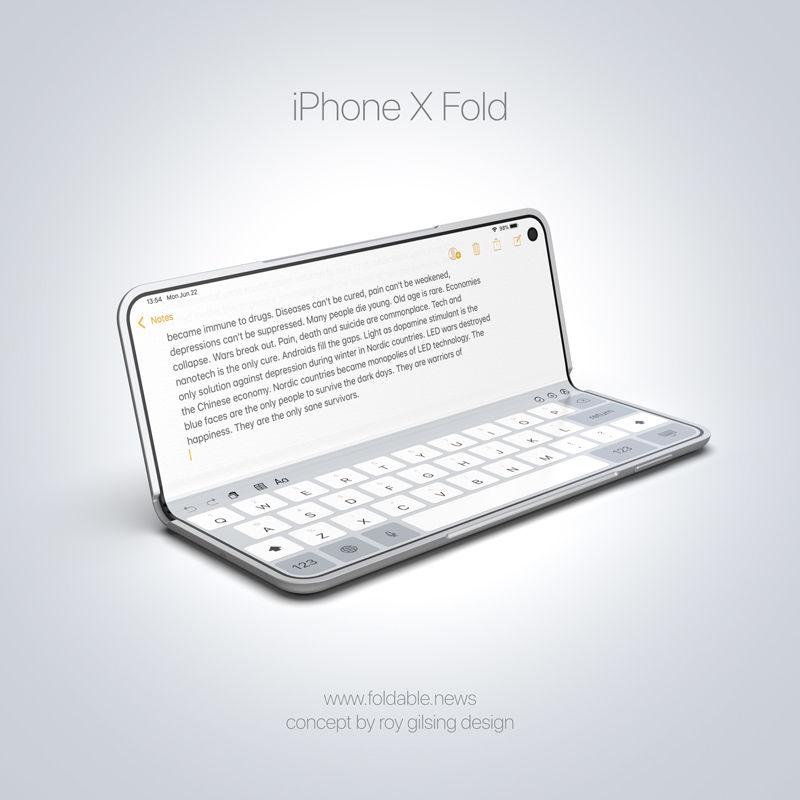