Over time, batteries in iPhones and iPads degrade, meaning they hold less charge and last less time. But how long should your iOS device last each day?

In this article we look at what kind of performance you should expect from your smartphone or tablet, as well as the lifespan of its battery.

How long should an iPhone’s battery last between charges?

We’d love to be able to give a definitive answer to this question, but the truth is there are a huge number of factors that can affect how your battery behaves on any given day. These can range from the apps you’re using to the strength of the mobile signal in your area.

For example, playing a game on your iPhone involves the display being on and complex computations being completed throughout your session. Alternatively, spending time in Instagram also involves the display, but less work carried out by the CPU. So you can expect the gamer to be reaching for the charger far earlier than the Instagram fan.

The same is true for those who live in areas where the signals from mobile antennas are weak, as one of the Macworld team discovered when they moved to the wilds of Cornwall, only to have the battery life in their iPhone fall off a cliff as it constantly sought to connect to the EE network.

Apple itself is circumspect when it comes to battery life, as you can see by the iPhone XR website page, where it’s stated that the phone has the ‘Longest battery life ever in an iPhone’. That’s great, and we trust that it’s also correct, but when you look for specifics all you find is the disclaimer ‘Battery life varies by use and configuration’. 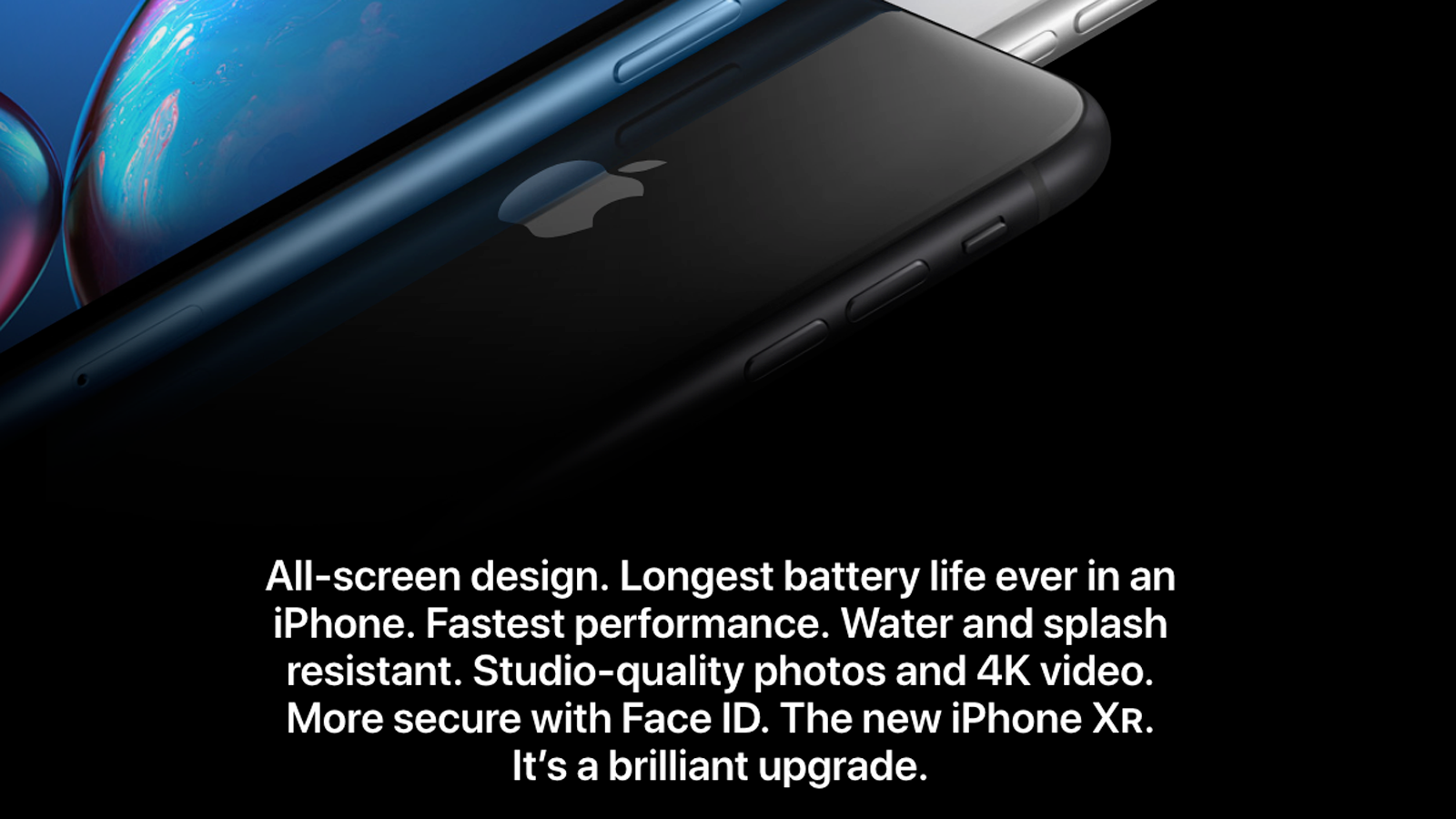 As a rule of thumb, with medium usage – this usually involves Wi-Fi, GPS, NFC, and Bluetooth turned on, and an hour or two of social media and web browsing, listening to podcasts and music, with possibly the occasional video thrown into the bargain – your iPhone should get to the end of the day without dying.

For some ideas on prolonging each charge, read our How to improve iPhone & iPad battery life guide.

How quickly will my iPhone’s battery degrade?

Again, there is much uncertainty here as well. While each battery that leaves the Apple factory is pretty much identical, the chemicals inside them will be exposed to different environmental conditions depending on where the user lives and how they use the phone.

There are some guidelines on how to charge and maintain a battery in order to keep it in good shape, which you’ll see outlined in our How to charge an iPhone properly tutorial.

One way to work out the potential lifespan of a battery is by calculating the charge cycles. These are the times that a battery completes a 100 percent recharge. That doesn’t mean every time it reaches 100 percent as a number, though. As it can seem a little complicated at first, here’s an example. 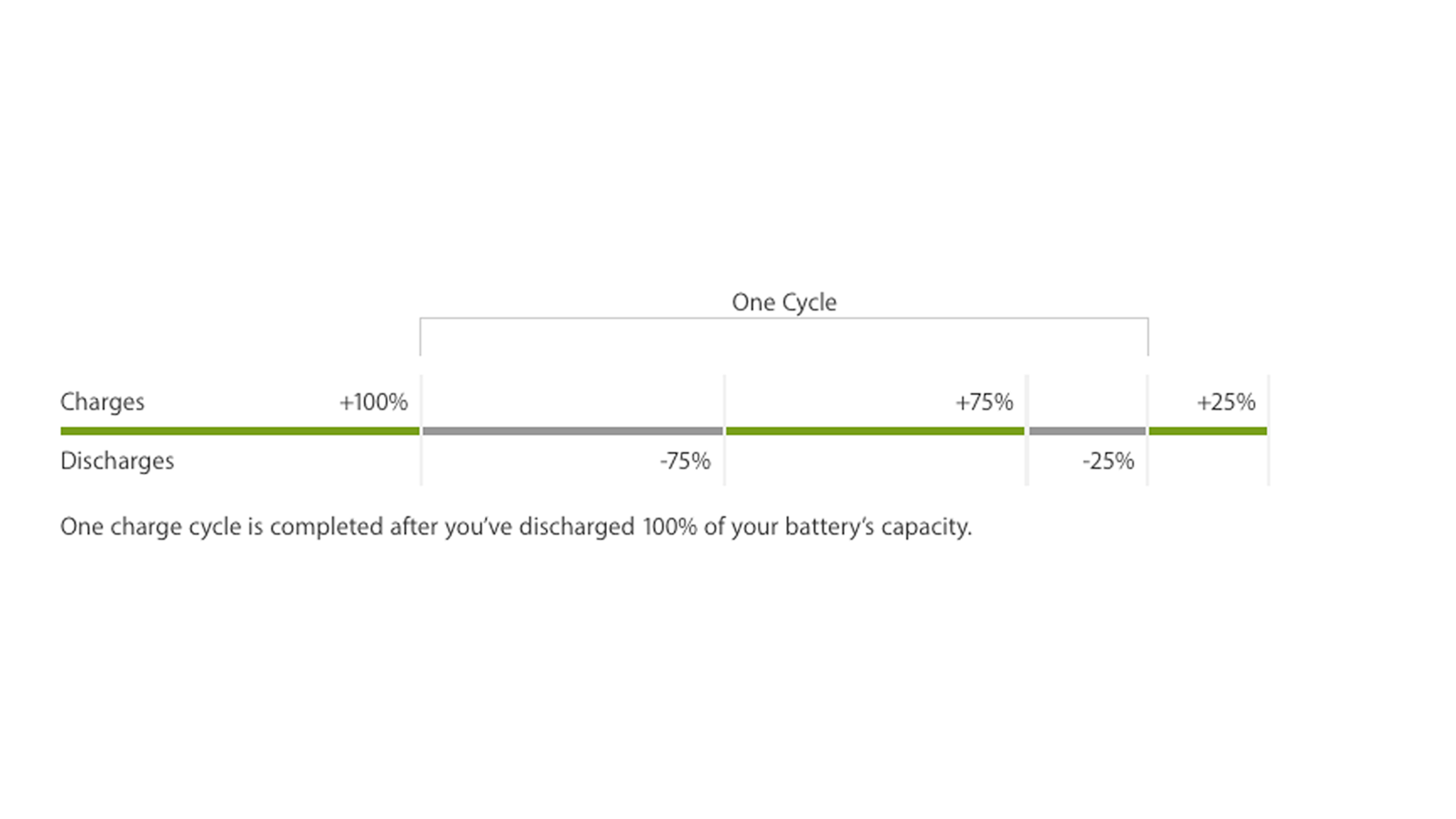 Any of these charge cycles can be made up of multiple small top-ups at a plug socket. So, if you charge it by 10 percent each day, then after 10 days it will complete a charge cycle.

Apple states on its site that “A normal battery is designed to retain up to 80% of its original capacity at 500 complete charge cycles when operating under normal conditions.” From this we can presume that if all goes well your iPhone’s battery should still be running at around 80 percent of its original capacity a year and a half after you bought it – possibly more if you’re a light user.

You can test the health of your battery now in iOS, so read our How to check iPhone battery health guide for more details.

How long will the battery in my iPad last each day?

As with the iPhone, there are different apps and activities that will drain your iPad’s charge faster than others.

Saying that, Apple seems happier to place a value on the prospective durability of its tablets, with the website clearly stating that the standard Wi-Fi versions of the 9.7in iPad, 11in iPad Pro, and 12.9in iPad Pro should all get ‘Up to 10 hours of surfing the web on Wi‑Fi, watching video or listening to music’, while the Wi-Fi + cellular models should manage ‘Up to 9 hours of surfing the web using a mobile data network’. Albeit with the disclaimer below that ‘Battery life varies by use and configuration’.

How long is the lifespan for the battery in my iPad?

iPad batteries behave in the same way as those in iPhones, meaning they move through charging cycles rather than just how many times you top them up to 100 percent.

Unlike with iPhones, Apple doesn’t state how many cycles you can expect from an iPad. Now, it’s fair to assume that as the batteries in iPads are bigger and usually don’t require charging each day, then they should last longer than their diminutive siblings.

If you’re worried that the cell in your device is not quite right, then we advise contacting Apple Support as they will be able to take you through the steps needed to work out if there’s a problem.

Read about how to improve Mac battery life here.