WWDC 2019, one of the biggest dates in Apple’s calendar, saw the announcement of not four but five new operating systems, including the brand-new iPadOS for tablets. But in this article we’re going to focus on iOS 13, and the new features it will bring to your iPhone.

Is iOS 13 a worthwhile update, and should you install it on your iPhone when it launches on 19 September? In our comparison review we compare the interface, features and ease of use of iOS 12 and iOS 13, to help you decide whether it’s for you. For more information about iOS 13 read about the best new features in iOS 13 here.

iOS 13 will be available on 19 September, the time it arrives depends on your location, it should be about 6pm here in the UK.

Which iPhones and iPads can update to iOS 13?

iOS 13 will be available to owners of the following iPhones and iPods:

iOS 13 will also come preinstalled on the new iPhones for 2019.

In an unprecedented step, Apple has announced that iPads won’t get this year’s iOS update. As mentioned previously they will instead get their own iPadOS operating system.

Another year, another iOS update that leaves the fundamentals of the design language unchanged. At first glance iOS 13 looks like iOS 12 – which isn’t a surprise, given how uncomfortable iPhone users felt the last time Apple did a big aesthetic overhaul ( iOS 7, back in 2013). 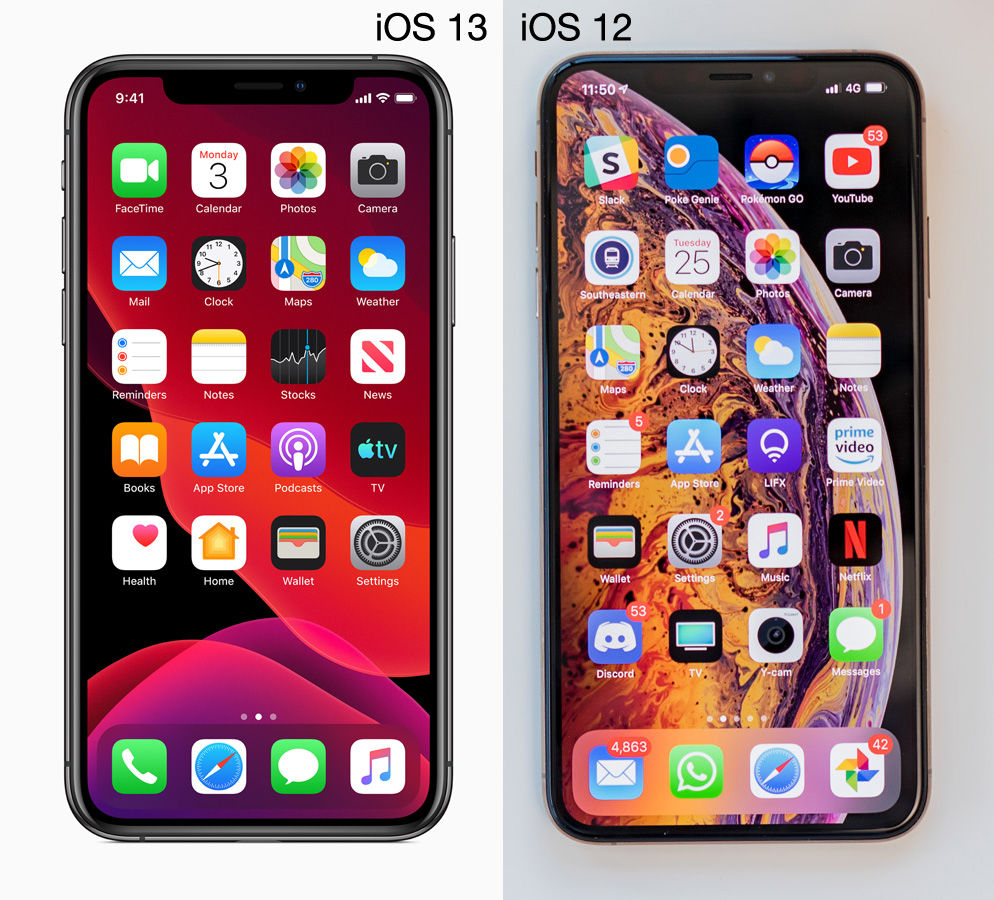 Once you start to explore the OS, however, you start to notice changes to the interface. Most obviously Apple has added the long-awaited Dark Mode: 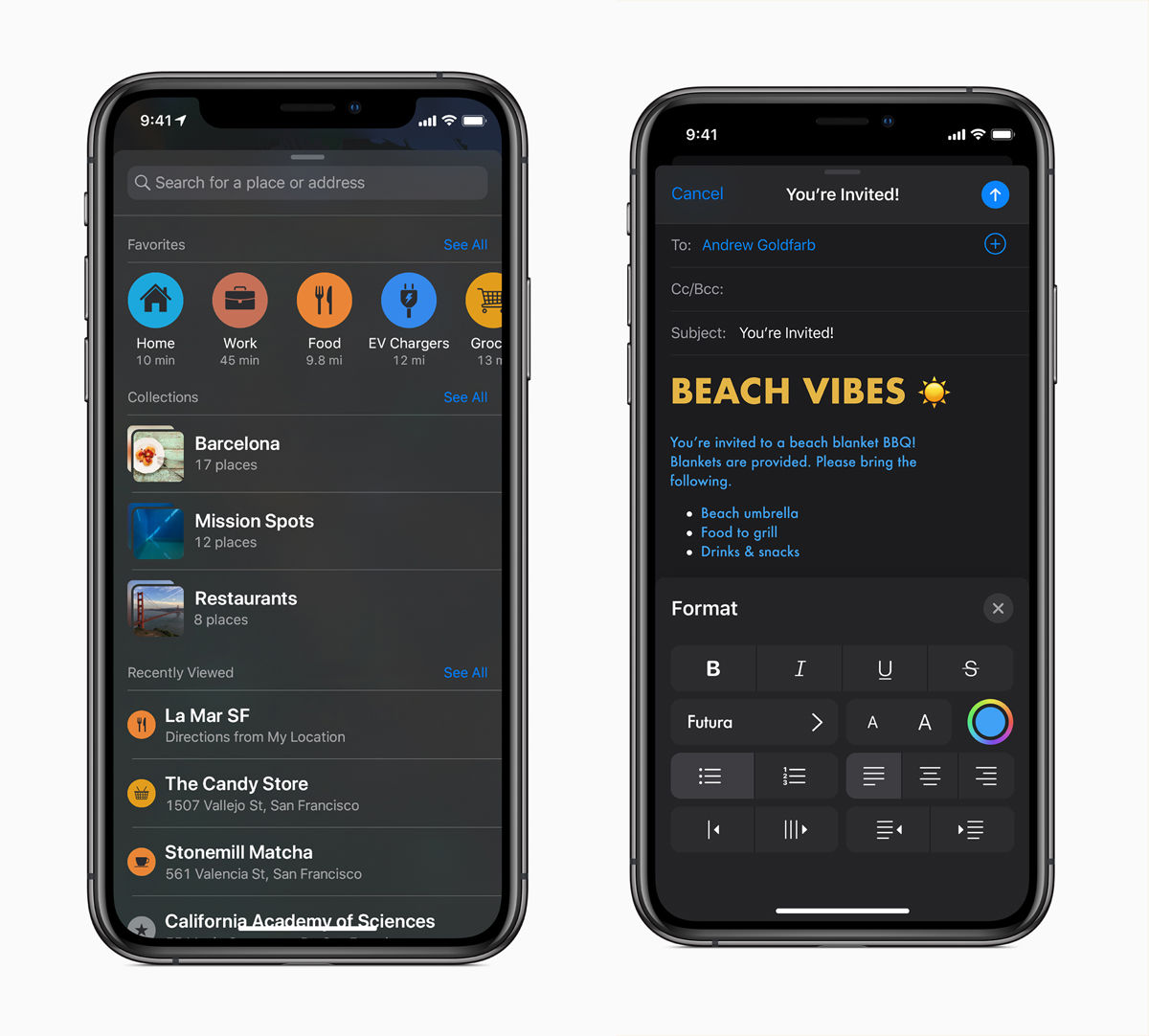 Dark Mode applies system-wide, at least in the first-party apps (you can see the effect above in Maps and Mail, and we’ve also seen it in Notes, Music, Messages, Photos, Calendar, Home, Reminders and more); third-party app developers will need to build in compatibility with the feature themselves, but rest assured that almost all will do so.

Why have people been asking for Dark Mode for so long? Partly it’s because this sort of thing just looks cool, and Apple appeared to acknowledge this in a presentation that verged on the silly at times. But it’s also more restful on the eyes to have a darker interface at night, as we’ve all experienced when using Google Maps on nighttime drives, for example. It’s unpleasant – and a little disorientating – to look up at a darkened environment, then down at a bright white screen, then back up to the dark, and dark modes (which Google Maps already offers, we should stress) really make things easier.

We don’t yet know how Dark Mode will be activated, but expect that, as with Night Shift at the moment, you’ll be able to turn it on manually or set a sunset-to-sunrise or custom schedule. 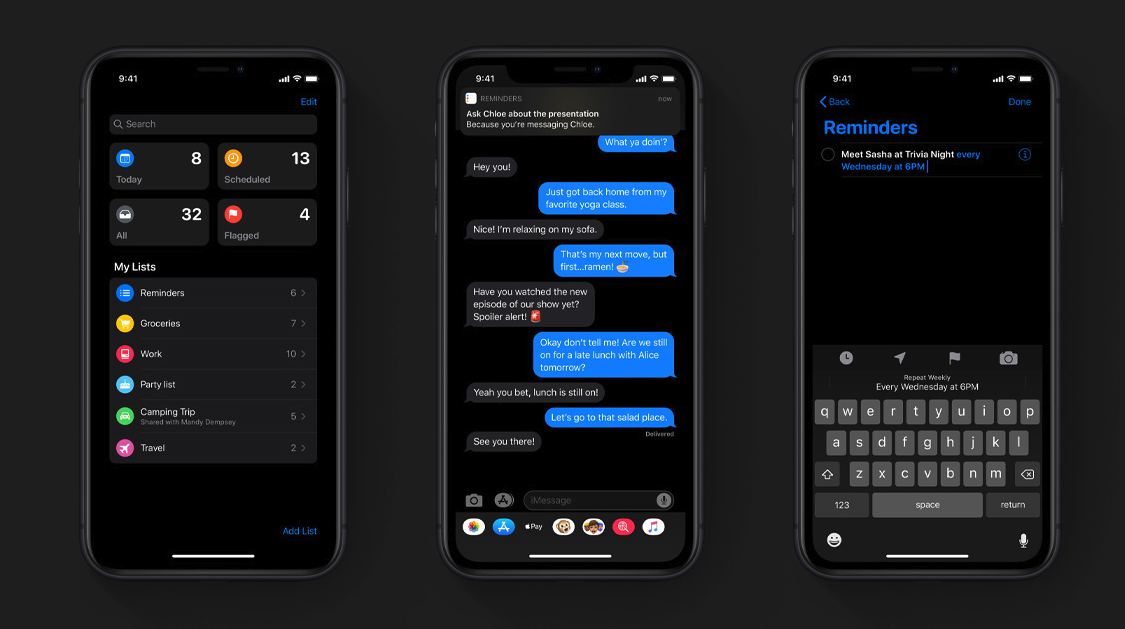 Apple also announced some app-specific interface redesigns. Reminders (above), which used to be a little confusing, has been revamped with smart lists, a better layout and organisation options, plus people tagging which syncs with Messages for collaboration.

Last of all, there’s some new customisation options for Memoji, including piercings and makeup, and more hats and hairstyles. 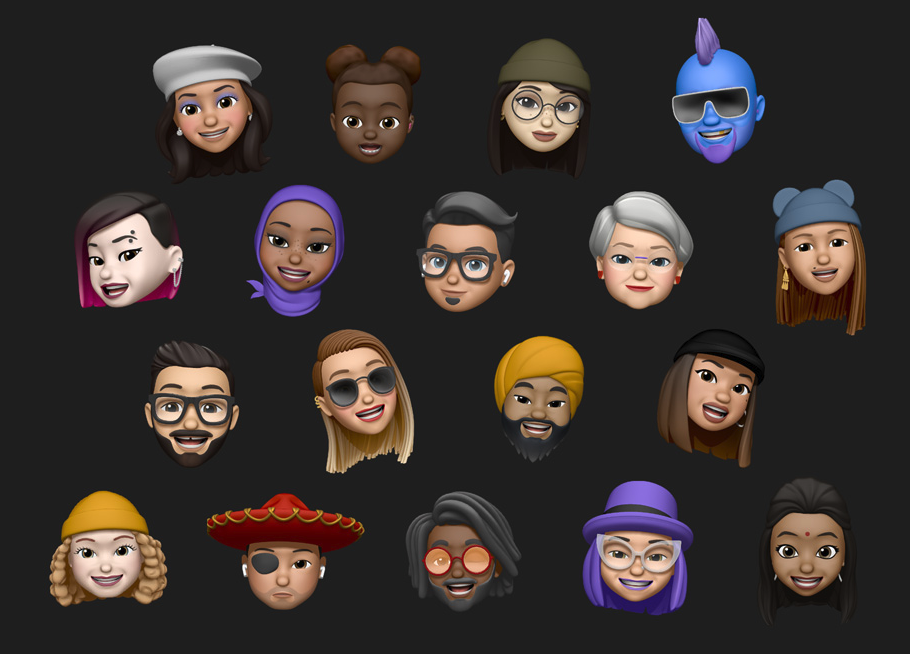 So much for the visual differences. But how does extra speed sound? It sounds great!

iOS 12 was heralded as a step forward in speed and stability, particularly for older devices. But Apple reckons it’s managed to crank up the accelerator again with the iOS 13 update.

(These sort of advances sound obvious – of course a newer version of an operating system will be quicker than the last one! – but it hasn’t tended to work out that way in the past. Many iPhone owners will have experienced a significant slowdown after updating iOS, simply because the new OS and its flashy new features are more demanding, and were designed with newer hardware in mind. iOS 12 and now iOS 13 are a refreshing change.)

In terms of quantitative differences, Apple is promising that updating from iOS 12 to iOS 13 will result in:

Now, it’s best to assume that these figures apply to the optimal scenario – the exact combination of hardware and software that produces the greatest difference. So you shouldn’t necessarily expect such a clear-cut advance. But it’s still nice to hear that Apple is focusing on performance as much as on new features.

What does iOS 13 let you do that you can’t do on iOS 12? Lots of things. Here are the highlights.

Most of us will be familiar with the commonplace option, within an app or web service, to log in using your pre-existing Facebook or Twitter account rather than by creating a new service-specific login. Apple is getting into this game, allowing (indeed, apparently obliging) developers to build in a Sign in with Apple option.

From a user perspective this sounds pretty great. Logging into an app usually has advantages – it can remember your customisation options and preferences, for instance – but having separate logins for every app is a pain. Using a single unified login is a convenient option.

Apple, meanwhile, has a good reputation for respecting and even fighting for user privacy, and assures us in this case that data collection is limited to the user’s name and email address, and that Apple will not track users. It feels like the company is less likely to sell your data on to advertisers than most tech companies, and certainly doesn’t need to; its business model is built around selling $999 monitor stands, not data collection.

If you’re an app developer, being required to offer this option may be less thrilling; it will represent extra development work, at least in the sort term (in the longer term some devs may simply stop bothering to do their own login mechanism, and actually save time), and those who rely on user data to generate revenue may have to change the way they do business – perhaps even switching from a free to a paid-for model.

Note that while this feature is being brought in as part of the iOS 13 update, this is one element that should affect users on iOS 12 (and earlier) too. If you update one of your apps once the developer has added Sign in with Apple, you should get it regardless of whether you’ve got iOS 13 or not.

As part of the iOS 8 update back in 2014, Apple allowed iOS users to install third-party keyboards, and the one that most attention focused on was Swype. Instead of tapping individual letters then lifting your finger off the keyboard, Swype (as the name suggests) lets you swipe directly across the screen from letter to letter in a continuous motion. It takes a little getting used to, but it’s faster and more efficient than the traditional touchscreen keyboard.

Swype was discontinued in 2018, but the swiping functionality has now returned as an integrated (but, we assume, optional) feature for the system keyboard in iOS 13. This is extremely welcome, but it may be worth noting that Android has offered this out of the box since around 2013. 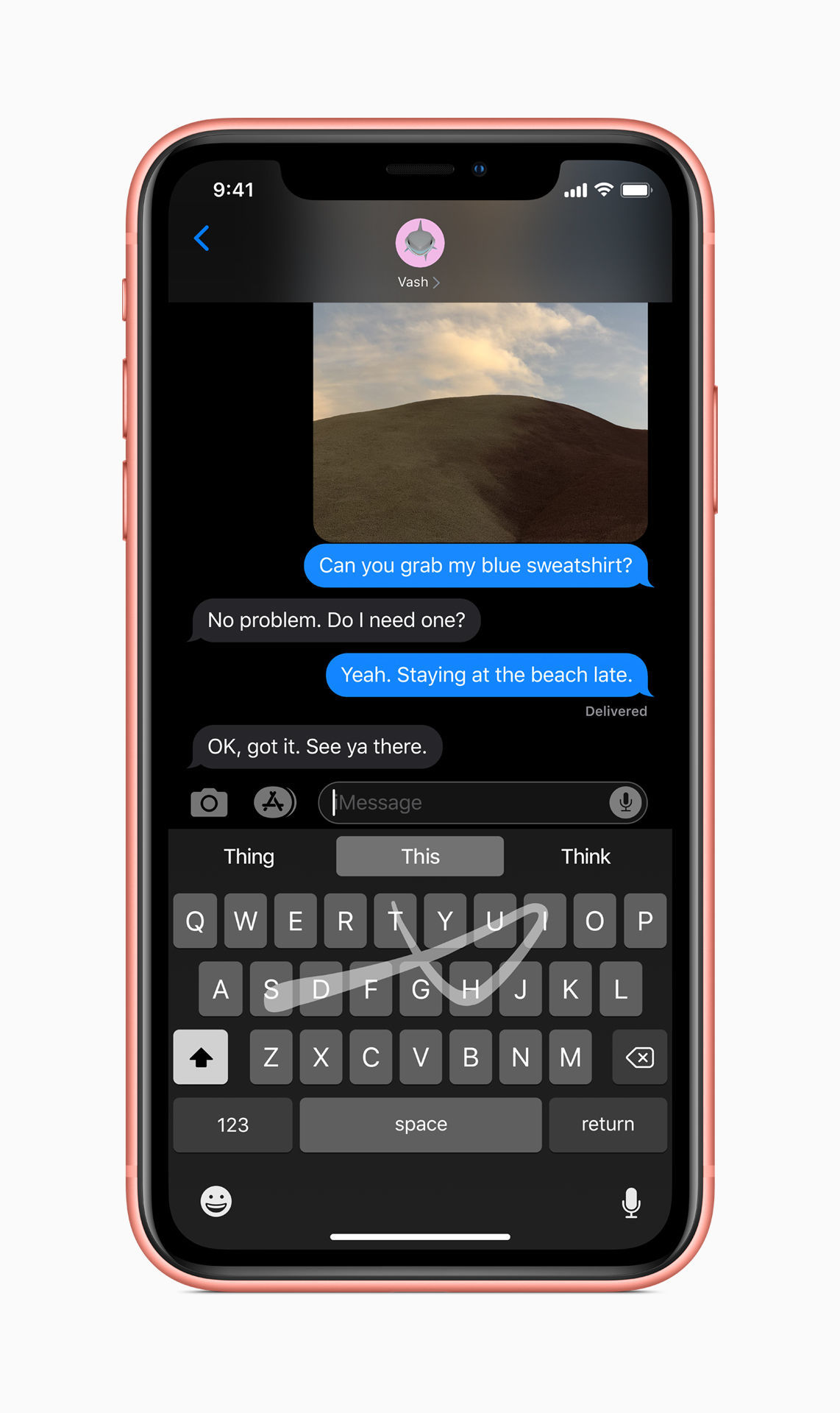 Photos seems to get a significant update every year. iOS 13 makes it easier to edit images within the app, with a wider range of controls that will make users less likely to turn to third-party alternatives such as Snapseed or VSCO.

You’ll be able to rotate video – that’s a simple but huge addition – and apply filters and effects to videos in iOS for the first time. 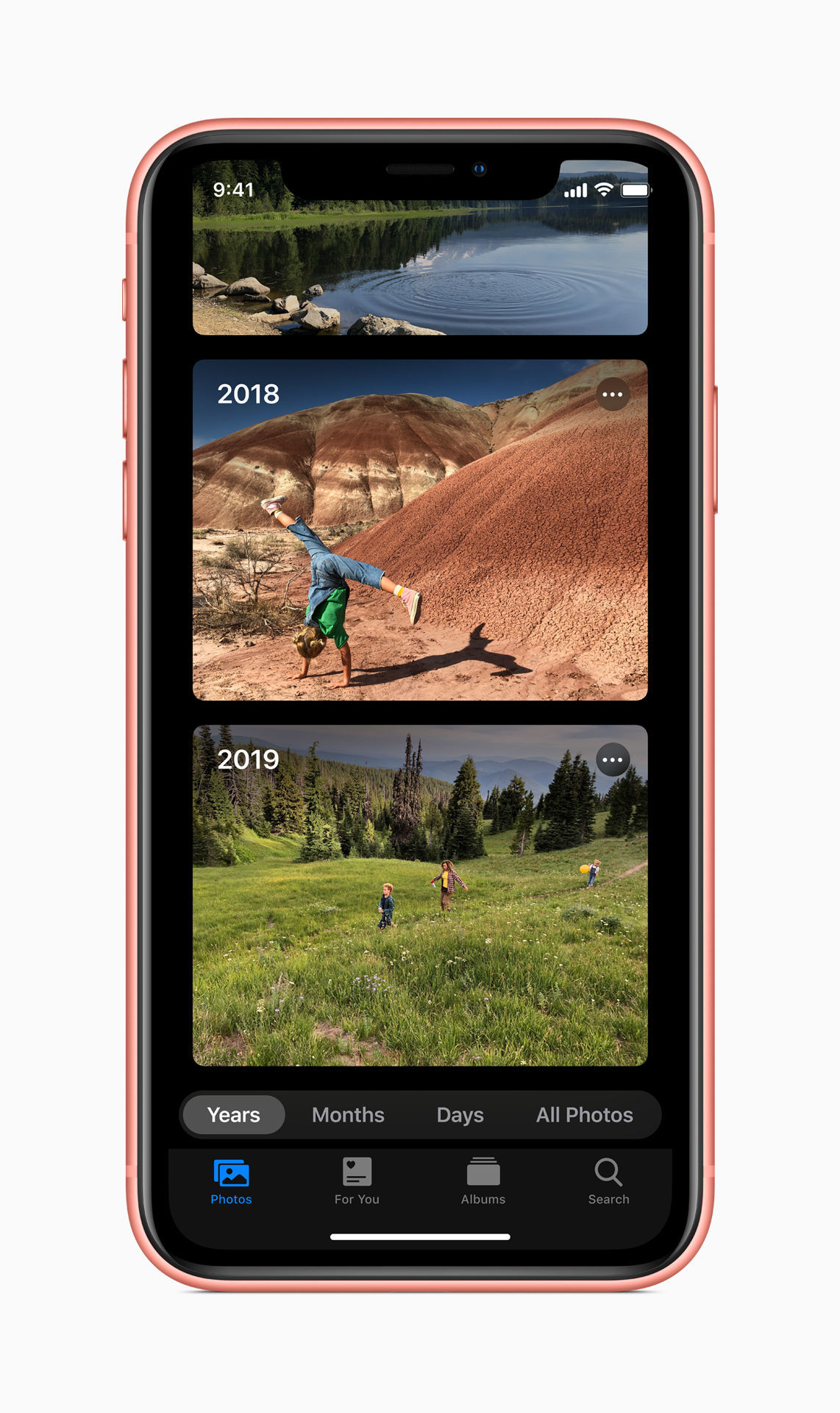 The last new feature we’re going to mention is exclusively for HomePod owners. Once you’ve got iOS 13 on your phone, you’ll be able to HandOff audio from phone to speaker and back again – which is to say, you’re listening to a song on the HomePod but want to step out for a moment, so jump it to the iPhone (and a pair of headphones, or the onboard speaker) where it continues from the same point.

Apple says this will work for all audio, not just music – which could be handy for phone calls.

Verdict: Should I update my iPhone to iOS 13?

Generally speaking it’s quite rare that we don’t recommend an iOS update.

You get a bunch of new features (in this case Dark Mode, swipe typing and Sign in with Apple, plus redesigns to Maps and Reminders, and improved photo editing) and rarely lose old ones (although some old apps may not be compatible; if you’re fond of an app that hasn’t been updated in a while, contact the developers to see if it will run under iOS 13). Apple also hasn’t done any drastic visual redesigns for a long time so you don’t have to worry about it looking weird. You’re looking at a chock-full pros column and a cons column that’s nearly empty.

Here’s the main reason why you might not want to update: it may change the way your iPhone performs. On occasions in the past upgrading to the next version of iOS has been known to slow down older devices, which struggle to cope with the new features and visual tweaks. But that doesn’t seem likely in this case, since (as with iOS 12) Apple has actually promised that devices will get faster. We haven’t tested this out to see what real-world improvements we can discern, but it seems unlikely that the company would focus on performance if it wasn’t reasonably confident.

For anyone running an iPhone 7 or later, we would definitely recommend that you update when iOS 13 is released to the public in September. Those on older devices may wish to hold off a few weeks to see if anyone reports a slowdown when updating; but they’ll probably be fine too.

Should I install the iOS 13 beta?

So much for the final public release, but installing a beta ahead of the launch is a harder sell. These won’t be totally finished and may contain bugs – worst case scenario, they could brick your device, and you should absolutely expect them to stop at least some of your apps from working properly until the devs solve compatibility issues.

If you’re really keen to try out iOS 13 ahead of the launch, make sure you go for the public (not developer) beta, which you can try for free without paying for a developer account – you’ll have to wait slightly longer but it’s worth it. And install it on a secondary device that you can manage without, rather than your work iPhone.