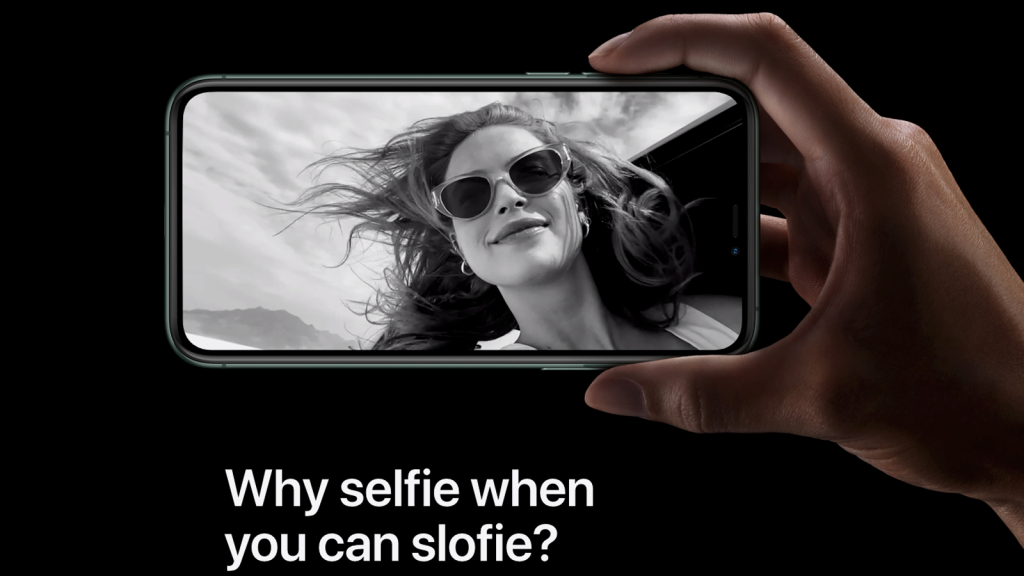 At its recent iPhone event, Apple announced a brand-new feature on the iPhone 11 range of devices: the Slofie. Now, while it might sound like the company has finally cracked the age-old problem of how you fit an ice-cream dispenser into a smartphone, the reality is not quite as dessert-based as some might have hoped. In this article we explain what a Slofie is and how you can create one.

Yes, we know, the name Slofie is pretty terrible. But that doesn’t mean that what it represents isn’t cool (no, don’t get your hopes back up, ice cream people). The name is a portmanteau of Slo-Mo and Selfie, as the thing itself is a slow-motion selfie.

Thanks to the new 12Mp TrueDepth front-facing camera Apple has fitted to the iPhone 11, iPhone 11 Pro and iPhone 11 Pro Max, users can now capture moving HD images at 120fps, which are then slowed down to make super-smooth slow-motion vignettes.

This can be as basic as tossing back your hair to imitate a classic shampoo advert or more ambitious efforts such as one Apple has released where a lady is standing in a desert while a sports car gracefully drifts past behind her.

Apple seems to be hoping that the new type of video will catch on with iPhone users in a similar way to Animoji, and it was recently reported that the company is seeking to trademark the term itself. So expect it to appear in Apple marketing ads in the near future.

How do I take a Slofie?

It’s actually very simple, but only if you have the right hardware. As mentioned above, the feature is reliant on the new TrueDepth camera, and as such Apple has limited it solely to the iPhone 11 range.

If you’re lucky enough to have one of those devices, then simply launch the Camera app, switch to the front-facing camera, select the Slo-Mo option, then tap the Record button once to begin and then once more to finish the recording. Your iPhone will process the video automatically.

When you’ve finished capturing video, there’s the Apple Photos video editing tools that allow you to trim the start and end points of the footage, as well as deciding when the slow-motion effect should be enabled. After the edit is complete you can share your Slofies directly to the social media platform of your choice, straight from your iPhone.