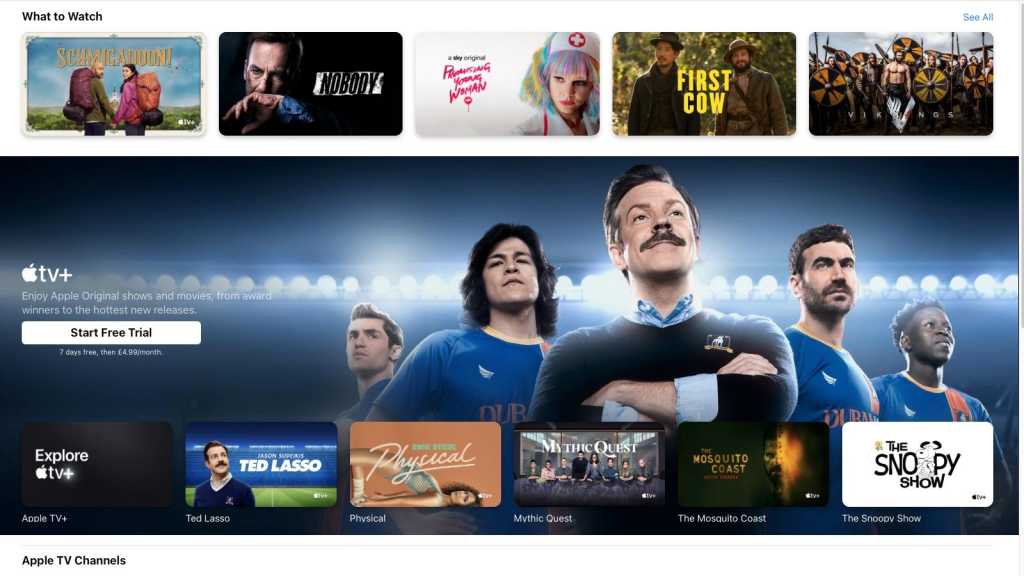 Apple TV+, the streaming service from Apple, arrived at the end of 2019 so it’s been here a while now, but it’s only recently come into its own as more and more people have discovered the shows on offer. Shows including Ted Lasso and For All Mankind, as well as movies like Greyhound, staring Tom Hanks. You can even watch a couple MLB games every Friday night.

Apple TV+ costs $6.99/£6.99 (until October 2022 it was $4.99/£4.99 a month). This is still less than other streaming services, but it also offers less content than many other streaming services, lacking the huge back-catalogues of films and TV shows on offer from Netflix, Amazon Prime, Hulu, or Disney+. If you want to learn more about what you can watch on Apple TV+ read everything you can watch on Apple TV+, which also includes the new shows that are coming to the service.

You might want to watch one of the shows being broadcast by Apple, but the monthly subscription may not appeal to you. Wondering how you can get Apple TV+ for free? We’ll run through your options.

How to watch episodes on Apple TV+ for free

There are a number of ways in which you can watch shows on Apple TV+ for free. Apple offers limited time trials (discussed below), and the service also allows you to watch the first episode of many shows for free. In fact there several dozen episodes available to watch for free including the first episodes of Ted Lasso, The Morning Show, See, Trying, and more.

Read about What is free on Apple TV+?

Apple made this popular show available for free from from November 23 to 27. Read more about how to watch it here: How to watch ‘A Charlie Brown Thanksgiving’ for free on Apple TV+.

It is likely that the A Charlie Brown Christmas episode will also be free over the Holiday period.

Apple offers various trials so that you can try out Apple TV+ before you subscribe.

Unfortunately none of these offers are available if you or your Family have previously accepted an Apple TV+ 1 year free offer from when the service first launched.

Once the trial period is up the $6.99/£6.99/month subscription will start immediately – but you can cancel this. See: How to cancel an Apple subscription.

Get 7 days of Apple TV+ free

If you want to watch a show, and have plenty of time in the immediate future, you could activate your free seven-day trial and binge-watch it!

You can subscribe to Apple TV+ on Apple’s website here, or via the Apple TV app on your device.

The 7-day trial will automatically auto-renew into a monthly subscription though, so you will need to be prepared to cancel within the week if you don’t want to be out of pocket.

The 7-day trial might sound attractive if you think you can watch a whole series in a week. But make sure the series is complete, as Apple typically adds new episodes on a weekly basis.

That’s all very well if you can watch the whole season in one week, but what if you think you might need a bit more time?

Get 7 days Apple TV for free

Get 1 month of Apple TV+ free

As long as you’ve never used the service before, you can actually get a free month if you sign up for the one month trial of Apple One. That trial will also include free one month trials for Apple Music, Apple Arcade, Apple News+, Apple Fitness+, and iCloud+.

At the end of the month’s trial the subscription starts at $16.95/£16.95 a month as an individual, but there are different plans available and crucially you can cancel at any time. Read: Apple One: What you need to know about Apple’s services bundle for more information.

Get 1 month Apple TV for free

It used to be the case that if you bought a qualifying new Apple product you could get a whole year of Apple TV+ for free.

Now that the “one year free” deal has concluded Apple is offering three months of Apple TV+ for free to anyone with a new iPhone, iPad, Apple TV, or Mac.

You can get three months of Apple TV+ when you purchase a iPhone, iPad, Apple TV or Mac from Apple. Apple Watch, HomePod, AirPods, and other Apple devices do not qualify. In short, your device qualifies if it’s a new Apple device that can actually run the TV app and watch Apple TV+ content.

Once the three months is up the $6.99/£6.99/month subscription will start immediately.

It is necessary to claim the deal within 90 days of setting up your new device.

Get a Apple TV+ free with an Apple Music student subscription

Head to this Apple page for more details.

Get Apple TV+ free with a Student Apple Music subscription

One way to save money is to pay Apple for the year up-front.

It’s not only Apple that offers free Apple TV+ trials. Some third parties offer even longer deals than Apple does. You’ll find U.S. and U.K deals below.

Just remember that at the end of the trial you may need to cancel with Apple if you don’t want the subscription to start.

Get Apple TV+ for free with T-Mobile and Spirit

T-Mobile offers Apple TV+ free to Magenta MAX smartphone customers, which is normally $185 a month for three phone lines (but is currently $140 a month). As well as getting Apple TV+ for for free for the length of their contract, customers also get Netflix (two screens) and Paramount+ for one year.

Get Apple TV+ for free with T-Mobile Magenta MAX

If you are on T-Mobile’s standard Magenta Plan you can get Apple TV+ for six months. Those customers also get Netflix (one screen) and Paramount+ for a year. A Magenta plan normally costs $155 a month for three phone lines.

Get Apple TV+ for 6 months with T-Mobile Magenta

If you were a Sprint customer the same deals apply as Spirit is now T-Mobile. Apple TV+ Now Included With Sprint MAX, and six months with Spirit ONE. Details here.

Get 3 months of Apple TV+ for free through Best Buy

You can get three months of Apple TV+ for free through Best Buy, without even making any special qualifying purchase. Just go to the Best Buy Apple TV+ promo page, hit Add to Cart, and check out. Follow the prompts to access your digital download, which is a code you can enter for three free months when you first sign up for Apple TV+. The code will only work for new subscribers.

This code has to be used during signup, so it’s probably the one you should use first, before redeeming other offers like the free 3 months for a qualifying Apple product.

Get Apple TV+ for 3 months with Best Buy

You can get two months of Apple TV+ with Groupon.

As usual if you sign up for a deal you will then need to cancel with Apple at the end of the free trial period.

Get Apple TV+ for 2 months with this Groupon

Get 6 months of Apple TV+ for free with Sky TV in the U.K.

There’s a great deal in the UK right now for Sky TV subscribers, where you can easily grab six months of Apple TV+ for free.

The offer is open to both new and existing Apple TV+ subscribers. You’ll need an iCloud account to sign up for Apple TV+. Existing subscribers can redeem the offer and their subscription automatically states that the next renewal is six months later.

To get VIP, log into the My Sky app on your iOS or Android device. Then click on the Sky VIP star on the bottom right-hand corner, tap ‘giveaways’ and scroll down to the bottom of the page. This deal is available until 31 March 2023.

All UK-based Sky subscribers can become Sky VIPs if they have one or more active Sky TV, Broadband, Talk and/or Sky Mobile products.

You can even qualify for this deal if you already subscribe to Apple TV+, you just need to cancel your subscription first.

Get 3 months of Apple TV+ for free with O2/Virgin Media U.K.

You can get three months free access to Apple TV+ via the O2 Priority app (this drops to two months if you have previously had an Apple TV+ trial). O2 Priority is a loyalty scheme for O2 customers that offers various benefits and discounts.

How to claim your free trial of Apple TV+ from Apple

Having made a qualifying purchase, or decided to try out the free 7-day trial, all you need to do is:

You have 90 days from buying a new device to start the free year’s subscription, so as long as you purchased your new Apple product recently then you should be ok to activate your trial. Also, if you stop the free trial before it ends you can’t restart it.

What if you are thinking of buying a new Apple device later? Will you be able to switch from a subscription to the free trial? We think that the way to do this would be to cancel your subscription before signing up again via the three-month trial.

How to share an Apple TV+ subscription with your family

You can also share a subscription to TV+ with six family members—yourself and five others.

To do this you all need to be part of the same Family Sharing group.

By linking your Apple accounts together under the Family Sharing group you will all be able to:

One of your family members will need to be the family organiser, who basically chooses who joins the group, and has to put up their bank details to pay for any purchases.

It’s supposed to be family members in the same household. While you could set this up with other ‘family’ members we think the frustration of having all the payments for everything going through the ‘organiser’s’ bank account could make this a hard sell. However, if does at least mean that you and your partner don’t both have to subscribe to the service in order to watch shows on both of your iPhones.

How to cancel an Apple TV+ subscription

So that’s a few ways to get Apple TV+ for free, at least for a short time, or by sharing a subscription with a family member.

However, we think the best way to get access to Apple TV+ is to subscribe as usual but just cancel at any time. You could watch everything you want this month and then stop subscribing next month and it would only cost you £6.99/$6.99. Sign up for Apple TV+ here.

To cancel your Apple TV+ subscription follow these steps: