As expected, Apple unveiled its latest iPhone generation at the oddly named ‘Hi, Speed’ event tonight, 13 October. Pretty much all the details of the launch leaked ahead of time, but the company still managed to put on an impressive and persuasive show: we’re all particularly excited about the new iPhone 12 mini.

Here’s everything you need to know about the iPhone 12 launch, including release date, design changes, new features, pricing for the full range & tech specs.

Apple also announced that League of Legends: Wild Rift will be released for the iPhone 12 later this year.

Read our iPhone 12 review and our review of the iPhone 12 Pro Max.

No surprises here – the only question was whether Apple would go for the ‘mini’ branding on the smallest model, and it has. There are four models:

All four models were announced tonight, but Apple is splitting them into two groups for the actual launch.

The two ‘medium’ 6.1in phones, the 12 and 12 Pro, will be available for pre-order on 16 October and go on sale on 23 October. Here’s where to pre-order the iPhone 12 with detailed pricing information.

The iPhone 12 mini and the iPhone 12 Pro Max, meanwhile, will be delayed until next month. They will be available for pre-order on 6 November and go on sale on 13 November.

Here’s the starting prices for the four models:

You can find full pricing on Apple’s website. EE has also announced it will be stocking the new phones from 16 October (12 and 12 Pro) and 6 November (12 mini and 12 Pro Max); you can register your interest on EE’s website.

It’s actually mildly pleasing for us here in the UK that there’s no additional ‘Apple tax’ on the pound prices – UK tech buyers are so regularly stiffed on conversion rates that it’s actually pleasing to see phones that cost the same in dollars as pounds. (Okay, it’s still a pretty shocking interpretation of the conversion rate. Just slightly less ridiculous than we’ve grown used to.)

At the same time, Apple slashed prices across the rest of the range.

Apple has gone for a return to the flatter, squarer-edged design of the iPhone 4 and its progeny (and the current iPad Pro models), rather than the curved-edge style we’ve grown used to in recent years.

Whether that’s good news will depend on your personal tastes. I think the squared-off design looks better, but devices in that style are harder to pick up and feel less pleasant in the hand. 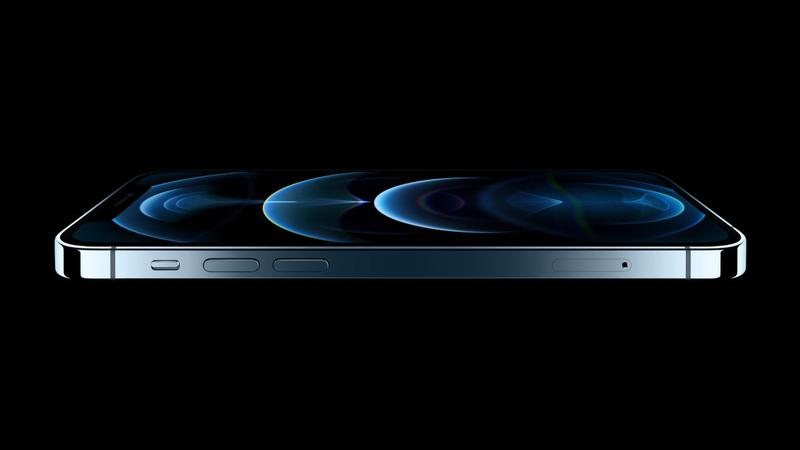 So much for shape. But there are two other significant changes to the design; one is extremely practical, and the other is totally cosmetic. Let’s do the practical one first.

You can experiment with the iPhone 12 design and accessories on Apple’s iPhone 12 website.

Apple has frequently talked up iPhone screen strength in the past. To a degree that’s fair, thanks to the inclusion of Corning’s Gorilla Glass, but no iPhone I’ve ever tested has been completely scratch-proof.

Corning was specifically namechecked in the iPhone 12 presentation because it’s supplying a new material for these handsets called Ceramic Shield. This is apparently “infused with nano-ceramic crystals” to “dramatically improve toughness”, offers 4x better drop protection than the previous generation, and is “tougher than any smartphone glass”. I’m using lots of quote marks because there’s no way of knowing if the iPhone 12 can walk the walk until we test it, but it sounds good.

For more information read: Drop test results: How durable is the screen on iPhone 12

There are some great new colours to choose from. (Call me superficial if you like. I don’t care.)

The iPhone 12 and 12 mini come in white, black, blue, green and (Product) Red, of which blue and green are new. Green is surprisingly pale and looks decent; the blue is rich and dark (albeit not seemingly as dark as the blue Apple Watch Series 6, although I’ll have to compare them in the flesh) and looks superb. 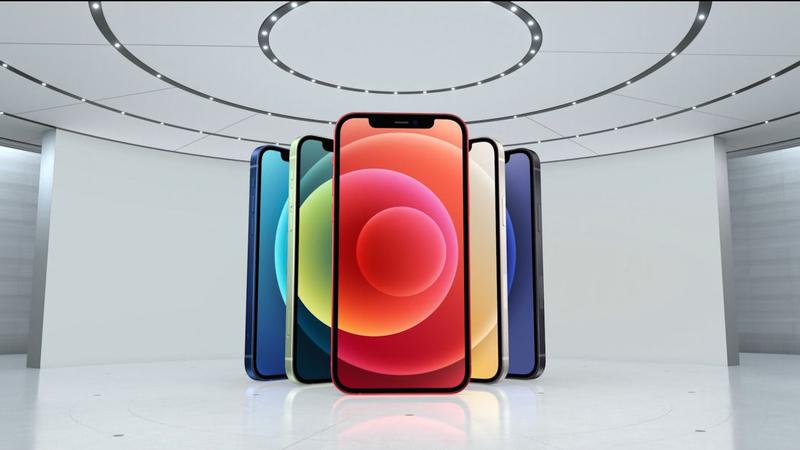 The 12 Pro and 12 Pro Max, meanwhile, come in silver, gold, Graphite (possibly a rebranding of Space Grey/Black, although again I’d like to see if it looks different up close) and the totally new Pacific Blue. Pacific Blue is a bit greyer than the blue of the iPhone 12, perhaps aimed at a more sombre market, but my initial preference is for the cheaper model’s vibrancy. 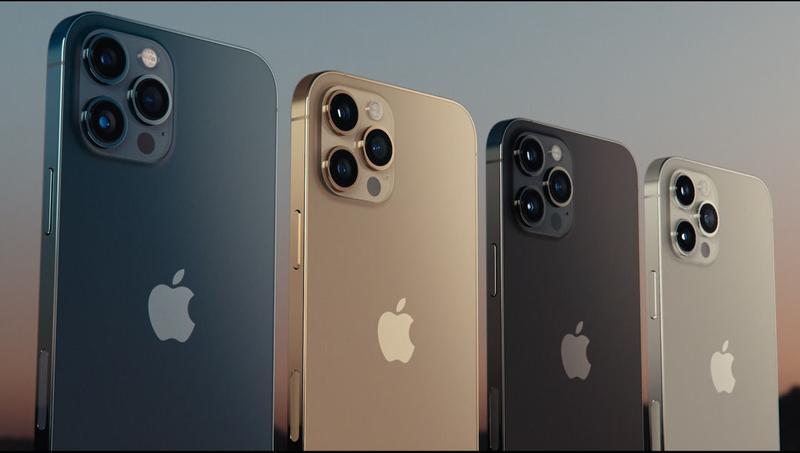 Now we’re into the new features – and the headline feature for this generation is support for 5G, which Apple calls “the most exciting step yet”. The company really couldn’t have played this any bigger, with the presenters at various points standing in front of a vast (albeit presumably virtual) 5G logo covering the entire stage. 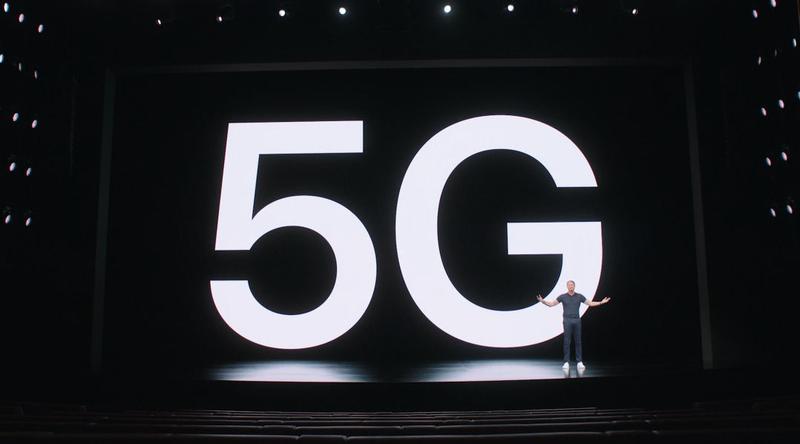 Apple made a lot of boasts about how well 5G is going to work, but of course it’s the carriers that will have to do the heavy lifting. Apple had a representative from Verizon on stage, who started promisingly by proclaiming “With iPhone, the wait is over. 5G just got real” but then – understandably – spent most of his time talking about how great Verizon’s 5G network is and soon will be, the stadiums and airports it will cover and the capacity and latency it will offer.

Sadly for those us here in the UK, he also focused on the cities and areas that will be covered in the US (60 cities by year end, he said) rather than elsewhere.

The general benefits of 5G are obvious: you get faster internet access when away from home Wi-Fi, perhaps as much as 4Gbps under absolutely optimal conditions, Verizon reckons. But the actual specific speeds will vary hugely depending on time and (above all) location.

The iPhone 12 range support the most 5G bands of any smartphone, Apple said, and offer a Smart Data Mode whereby, when 5G doesn’t offer any benefits, the phone will switch to LTE to save on battery. They support the especially high-speed mmWave version of 5G.

Note: Apple has stated in a document shared with phone networks that if the iPhone 12 is used with dual SIMs 5G will not work. More here: If you use dual SIM cards in iPhone 12 you won’t get 5G.

There are specific reports suggesting that Some iPhones 12 models have battery problems. It’s thought these could be caused by 5G.

Yes, you read that right. The iPhone 12 launch sees the return of MagSafe, a beloved feature on MacBook power leads that Apple began phasing out in 2016.

MagSafe here means a system of magnets designed to hold a wireless charging pad in the right place to charge the iPhone. That’s handy, for sure: many iPhone owners will know the pain of putting their device on a charging pad carelessly and discovering eight hours later that it wasn’t on the sweet spot and couldn’t draw any power. (Always listen out for the little ping!) 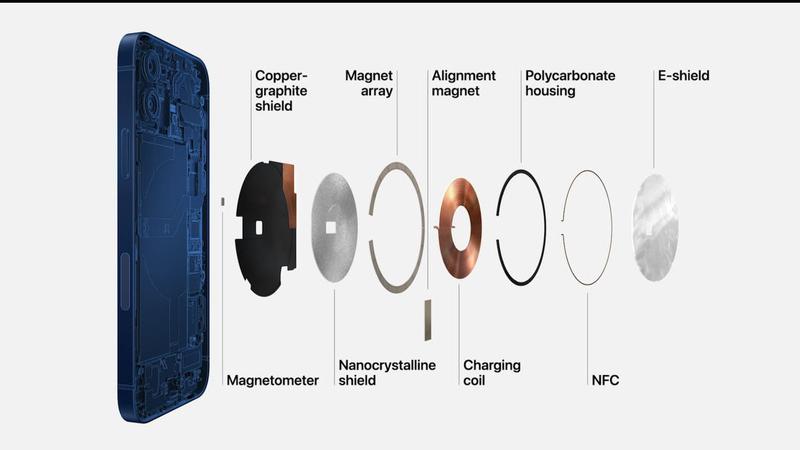 On the MacBook, of course, MagSafe wasn’t just about holding the power cable in place: it also allowed it to separate from the device if yanked (when someone blundered into the wire, usually) rather than sending the MacBook crashing to the floor. I would say the second part of that was the most important, and to be honest can’t really see how it applies to the new version of MagSafe Apple is launching for the iPhone. Still, it looks and sounds convenient, if not quite as potentially disaster-averting as the older version.

Also, read about why MagSafe rather than USB-C is the future of the iPhone here: Why we will never see an iPhone with USB-C

Learn more about MagSafe here: What is MagSafe?

We don’t get any more conventional lenses this year – Apple hasn’t done a Gillette and pushed to four lenses on the rear – nor have the main cameras specs changed. But aside from its obvious AR capabilities, the addition of a new LiDAR scanner opens up new photographic possibilities: faster autofocus in low light, and a new feature: Night Mode portraits. 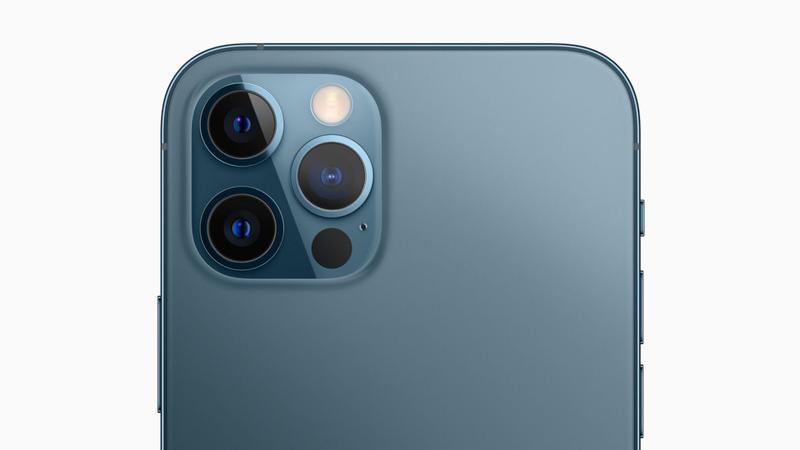 Talking of which, Apple has also added Night Mode time-lapse photography, and an updated version of its Smart HDR feature for combining multiple exposures to tackle complex lighting conditions: Smart HDR 3. This produced some terrific-looking mixed-conditions shots in the demo (Apple essentially said the new version applies more adjustments than the previous generation), but we’ll have to try it out before we can give our verdict.

Support for HDR video formats is new this year, too.

We look at the camera features specific to the Pro range in a separate article: Major improvements in iPhone 12 Pro cameras. We also have a comparison of the iPhone 12 Pro and Pro Max that might interest you. 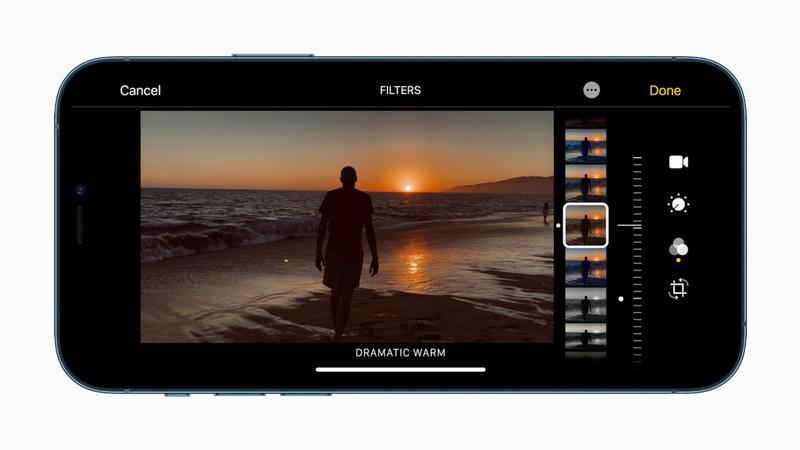 In several cases the screens are sharper too: all four of the new models have a pixel density of at least 458ppi (pixels per inch), whereas the iPhone 11 generation were split between 458ppi (the Pros) and 326ppi (the standard iPhone 11). In fact the iPhone 12 mini has the highest pixel density of any iPhone, at 476ppi.

We’ve only scratched the surface of the updates and new features in the iPhone 12 range. Here’s the full specs list.

(Note that the inclusion of an OLED screen on the standard as well as Pro models this year, while excellent from a picture-quality point of view, means repair costs have gone up.)