Widgets are a quick and easy way to add extra functionality to your iPhone or iPad, bringing you the information you need at a glance. They are small programs that provide shortcuts to features normally found inside your apps.

Right now you can access widgets quickly by swiping right on the Home screen to unveil the Today View page; but when iOS 14 arrives later this year you’ll also be able to pin them directly on to the home and other screens themselves, for even easier access. In this article we explain what widgets do and how to set them up, and recommend a few you should add to your device to get started.

When you install an app on your iPhone or iPad, there’s often an accompanying widget available. This software acts as a mini version of the app, giving you fast access to the information it provides – such as the weather, upcoming appointments in your calendar, recent notes, and other similar data.

Widgets also act as shortcuts, so tapping one will immediately take you to the matching place on the app itself.

Where are my iPhone widgets?

At the moment, iPhone widgets are located on a single screen that’s very easy to access, but this will change in iOS 14 as we outline below. For those running iOS 13 or earlier, if you’re on the home screen then swiping right will take you to the widget page. The same can be done from the lock screen.

You can also get to them via the Notifications Centre. This is achieved by swiping down to open Notifications, then swiping right.

How to edit iPhone widgets

When you download a new app, the widget doesn’t automatically get added to your widget page. This is presumably to stop it getting flooded with a variety of ones you don’t want or for which you have no use.

You can add or remove widgets manually, and the process is easy. Open the widget page (or Today View as Apple calls it) through one of the methods outlined above, then scroll down to the bottom until you see the Edit button.

Tap this and you’ll see a list of all the current available widgets on your iPhone. The ones already on the widget page will have red circles with white horizontal lines through them (similar to a No Entry sign) displayed to the left of their names.

To the right you’ll also see three lines. Tapping and holding these allow you to move the widget up and down the list, so you can place it where you like.

Scrolling down to the More Widgets section will show you all the ones installed on your device but not currently available on your widget page. To add them, tap the green circle with a plus sign inside that is displayed to the left of the name. Then use the three lines to place the widget where you want it on the list.

How widgets work in iOS 14

During its recent WWDC keynote, Apple unveiled the new widget features that will be coming in iOS 14. These take the mini apps out of the widget screen and allow users to place them wherever they want on any of the Home and other screens.

It’s something we’ve seen a variation of previously on iPadOS, but it’s brand new for iPhone. 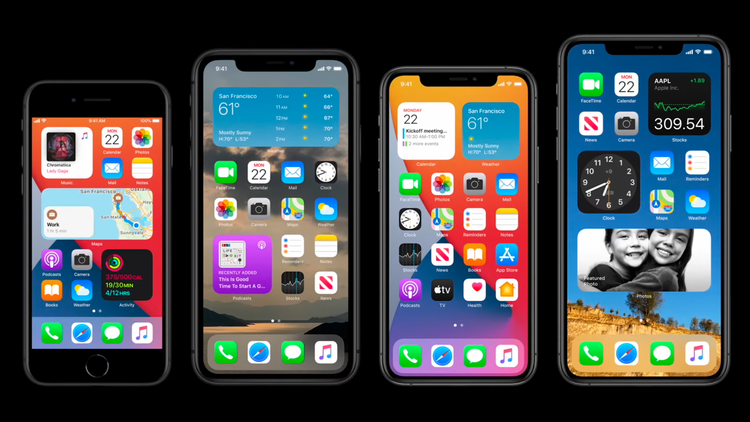 Swiping right on the home screen opens the Today View page where all of the widgets live. Gone is the uniformity of the previous versions, as Apple now makes it possible for widgets to be resized, so a world clock can be small enough to show just the clock face, while a messages widget can display a few of your last communications.

Tapping and holding on one will allow you to then drag it to any screen you choose, with the existing app icons automatically rearranging themselves to make room for the new arrival. You can add multiple widgets on any screen just by tapping the + icon in the top left corner when in jiggle mode, and then selecting one from the Widget Gallery that appears.

When using the Widget Gallery to select a new widget, you’ll also be able to swipe through the various sizes on offer for each one so that you can display the information in the way that you find the most convenient.

One clever option is something called the Smart Stack.

This is essentially a mini-gallery on your Home screen that you can swipe through to reveal several of your most used widgets, all with live data being displayed. This isn’t the reason it has the name Smart, though, as Apple explained that the active widget automatically changes throughout the day to offer you the information it thinks will be most useful at that moment.

For example, in the morning the Smart Stack could show you the news, then in the afternoon the calendar may appear so you know when your next appointments or meetings are coming up, while the evening could be a time to look at your Apple Health achievements.

To use these features you’ll need to wait for the official release of iOS 14, which is usually in September when the new iPhones arrive. Should you want to get your hands on it earlier than that, you can join the Apple Beta software programme and run pre-release versions of iOS.

There are some risks involved, as the very nature of beta software is that it’s unstable, but if you’re happy to proceed then you can found out what you need to do by reading how to install the iOS 14 beta.

Some widgets to get you started

Apple’s own apps are all equipped with widgets, and Calendar, Notes, Podcasts, and Screen Time are some of our favourites. A few others you might want to add include Shazam, which allows you to quickly get the song-identifying app up and running so you don’t miss which track is playing in the pub or while out shopping.

MyFitnessPal is a good alternative to Apple Health and the widget allows you to enter your calorie counts after each meal via its catalogue of meals. Things 3 can be a great tool for organising your life and the widget instantly shows all of your tasks for today, plus allowing you to tick items off your list.

Evernote is another popular organisational tool: an app that stores all your notes and uploaded images. The widget displays the most recent additions to your notebooks and lets you make edits on the fly.

How to use iPad widgets on the home screen

With iPadOS, Apple introduced the ability to have the Today View widget on the home screen. You can access this at any time by swiping in from the left, but for a more permanent fixture you can actually pin it to the Home screen.

To do this, swipe in from the left to reveal the Today View widget, then scroll down to the bottom of the panel until you see the Edit option. Tap this and select the Keep on Home Screen option at the top of the page.

Now you’ll have instant access to this feature when you open your iPad. To reorder the widgets or add new ones, use the same method described above for iPhone.

So, scroll to the bottom of the panel, tap Edit, then either tap the red circles next to apps to remove them or the green circles to add them. You can also reorder the widgets by tapping and holding the three lines to the right of each one’s name and dragging it to your preferred position on the list.

To see what goodies Apple has in store for iPad and iPhone users, read our guides to iPadOS 14 and iOS 14.

You will also be able to use many of the same widgets in macOS Big Sur – read about how to use widgets on the Mac here.