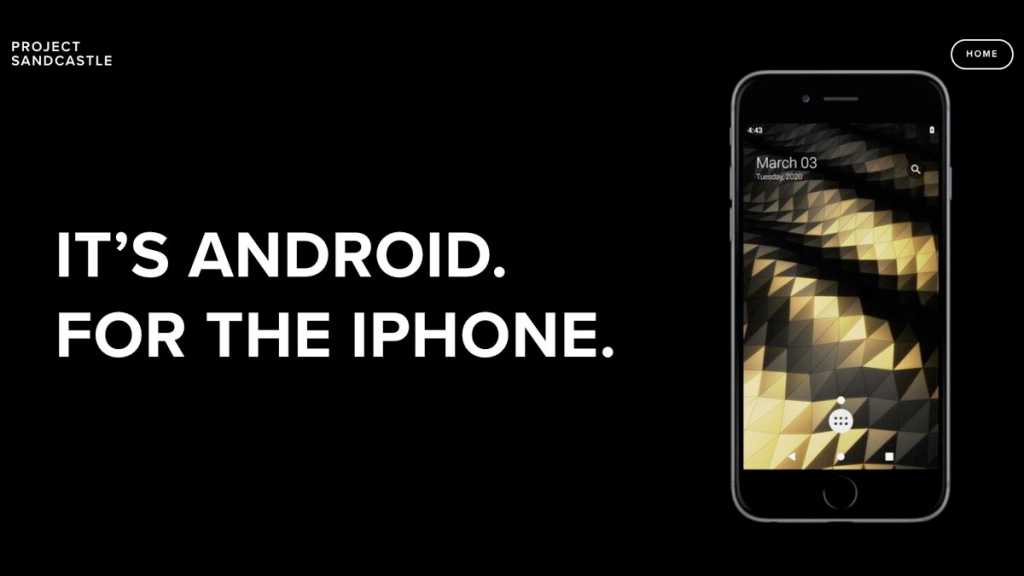 “I’m like a dog chasing a car,” says the Joker (not the best of people to be quoting, as a general rule, although his opinion on working for free is relevant for the media industry). “I wouldn’t know what to do if I caught one.”

Well, Corellium just caught the car, and as much as you’re impressed by the dog’s speed and tenacity, you do wonder what the point was. And worry that its paws are going to get run over.

Yesterday – as reported by Cult of Mac – the company released a public beta of Project Sandcastle, a piece of software that allows you to install and run Android 10 on a small number of iPhone handsets. Which is pretty amazing, really, and sure to annoy Apple, which is currently suing Corellium for something else.

But it’s also totally impractical. For a start, as Cult of Mac observes, it doesn’t enable Android to install apps from the Google Play store, and isn’t compatible with the handset’s camera, audio, Bluetooth and mobile data. Running an iPhone like this is like riding a bike in a Mr Blobby suit, which incidentally is something we’d love to see.

Admittedly, at this point this is more of a proof of concept than anything close to a finished product. But even if Corellium manages to iron out the bugs, you’re left with a lot of questions, starting with “Why?” and continuing with “Seriously, why?” and “Dear God, what were you thinking?” Because yes, Apple fans sometimes complain about the restrictions the company places on our use of its hardware and software, but iOS is one of the best things about the iPhone and the last thing we’d voluntarily change. As one of our colleagues immediately exclaimed upon hearing this news, we’d vastly prefer iOS on an Android phone.

Corellium’s founders have a jailbreaking background, and one senses that Sandcastle comes from a place of principled nonconformity; that they chafe against the idea that iPhone owners aren’t allowed to install whatever software they like on the hardware they paid for, and decided to install Android just to show that they can. We honestly applaud that attitude, and are glad that companies like this exist, while at the same time feeling that this sort of thing is absolutely not worth the hassle.

To look at things more broadly, this is fundamentally the choice you make when deciding whether to get an iPhone or an Android handset. Do you want complete control, or are you prepared to allow the manufacturer to dictate the way many things run in return for an improved experience? We totally understand why so many people prefer the first option, but a lot of the time it makes more sense – assuming you can afford the higher prices, which is another factor we don’t want to underplay – to accept that Craig Federighi understands software interfaces better than I do.

So no, we won’t be rushing to install Android on our iPhones, while remaining flabbergasted that it’s possible. If you completely disagree, however, and have an iPhone 7 or 7 Plus to hand, you can download the beta from the Project Sandcastle website. And more general advice can be found in How to install Android on iPhone.