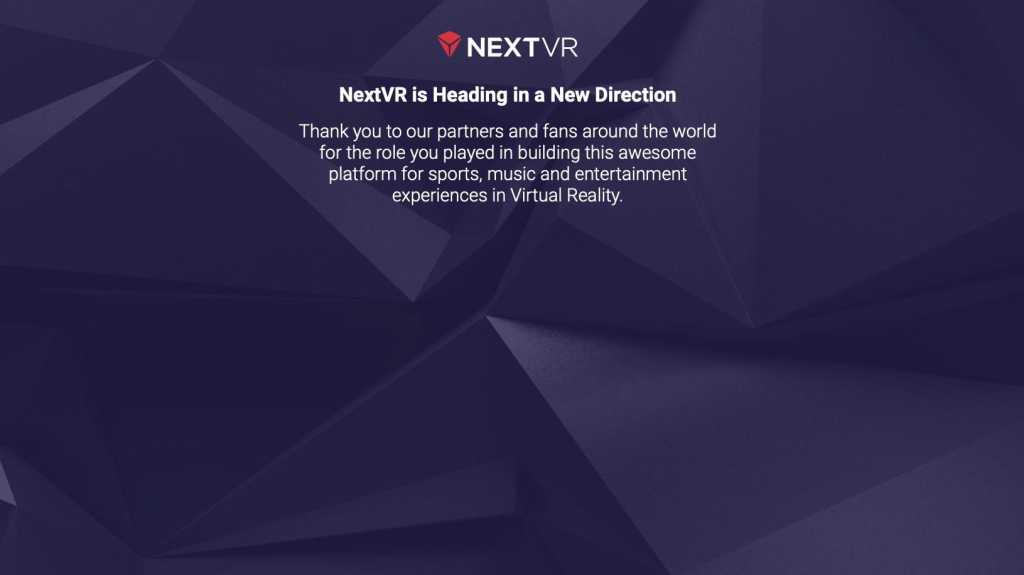 Apple has confirmed it has bought NextVR, a startup that focuses on broadcasting major events in virtual reality.

An Apple spokesman confirmed the acquisition to Bloomberg, although no other information was given besides Apple’s standard comment: “Apple buys smaller technology companies from time to time, and we generally don’t discuss our purpose or plans.”

It’s not clear how much Apple spent on the acquisition, 9to5Mac reported back in April that the takeover was “expected to be worth around $100 million”.

Prior to the acquisition NextVR provided technology for viewing live music and sporting events with VR headsets from PlayStation, Oculus, HTC, Lenovo and Microsoft. It had partnerships with NBA games, WWE, Wimbledon, and also offered exclusive behind-the-scenes music experiences and stand-up comedy events.

NextVR website now shows only the statement: “NextVR is going in a new direction. Thank you to our partners and fans around the world for the role you have played in building this great platform for sports, music – and played entertainment experiences in virtual reality”.

Apple will likely use the technology as a way to explore new ways to deliver content either through Apple TV + or through virtual events. Apple could even use the technology itself – a virtual reality component to WWDC could make that event more attractive as it becomes virtual.

Apple’s interest in NextVR is unsurprising given its plans relating to augmented reality. On its website Apple boasts “the world’s largest AR platform with hundreds of millions of AR-enabled devices and thousands of AR apps in the App Store,” and CEO Tim Cook has made it clear that AR is a priority for the company. Apple’s latest sensors and processors are built to take the ARKit platform to a new level.

The iPad Pro recently gained a LiDAR scanner that “measures the distance to surrounding objects at a distance of up to 5 meters, works both indoors and outdoors and works at the photon level at nanosecond speeds”. The new sensor improves object tracking and motion detection to seamlessly merge the real and virtual worlds.

The acquisition of NextVR doesn’t mean that we are any closer to the arrival of an Apple VR headset, or even an AR headset from the company. NextVR is focused on content, not hardware.

This isn’t the first acquisition relating to VR/AR for Apple. These companies have been acquired by Apple over the past few years, all of which will have an impact on its plans for AR and VR.