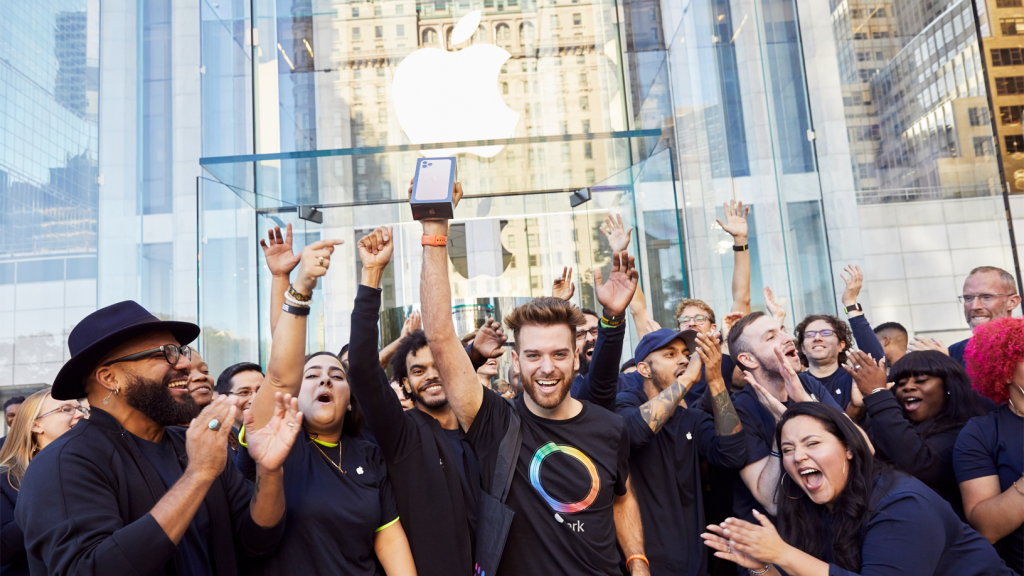 Apple is sitting on top of the world right now. The first trillion-dollar company, it has the tablet market sewn up with the iPad, the battle for wearables has already been won by the Apple Watch, it makes more money on its ever-popular iPhone range than any of its flagship competitors, and even the laptops now have decent keyboards again.

And I’m left asking myself, “Where did it all go wrong?”

To make some sense of it, come with me back to a time when the Apple symbol wasn’t quite as prevalent as it is now.

In 2005 the iPhone was just a glint in Steve Job’s eye and the majority of people knew Apple due to the iPod. This amazing little invention, that boasted 1,000 songs in your pocket, was going great guns and changing the way people accessed music while out and about. A few years before, the company had launched its iMac range of desktop computers, decked out in brightly coloured translucent plastic shells, a breath of fresh air in the age of beige boxes.

Into this world wandered a younger version of myself, looking for something different to the norm. An alternative to the mainstream boredom of Windows PCs that dominated my life as an IT support guy for a small firm.

The iBook was my first Apple product, and it was love at first sight. The white plastic shell and subtle grey trim, glowing Apple symbol on the lid, great keyboard, and OS X Tiger looking about as far away from a Microsoft product as you could ever want. The thing even had a light that pulsed as it charged, making it appear alive. I knew I was hooked.

That iBook accompanied me as I transitioned into a full-time writer and would eventually be replaced by the MacBook a few years later. It even survived a botched attempt to upgrade the RAM where I managed to fit the modules incorrectly. Fearing I had ruined the machine, I contacted the Apple Store and booked an appointment at the Genius Bar.

I trudged up to Regent Street to hand over the mangled carcass of my Mac, expecting a hefty bill for my troubles. But half an hour later I was contacted to say it was fixed and that I could take it home – for free! I can’t stress how different this was from the generic computer stores of the time who preyed on unsuspecting computer users.

But the best part was the sense of being an outsider. I had chosen this path, veered away from conventional behaviour and found something that matched my sense of individualism, so far as anything mass-produced and sold across the globe can be individual.

Then came the iPhone, the iPad, and the MacBook Air. In a few short years Apple unleashed an all-out assault on the technology industry and in turn went from the choice of the minor rebel to the mainstream. Everywhere I went there were Apple logos.

At first this was great, as we proud owners would nod sagely at each other in mutual respect and to acknowledge a fellow convert. But soon, as ubiquity took hold, I went from ‘member of a secret society’ to ‘lunatic trying to agree with random strangers who just want to check their emails while having a coffee’. The magic began to fade.

There is a light that sometimes goes out

From there on in things went from bad to worse. Apple products sold in record numbers, its carefully crafted ads became iconic, and slowly but surely the designs became less fun and more corporate.

The glowing Apple logos disappeared, clever magnetic power cables that could prevent a Mac crashing to the floor when someone walked past were ditched for standard connectors, and the staunch one-handed iPhone became a two-hander unless you were happy to risk disaster while testing your dexterity. Apple had grown up and become respectable.

It was like having a favourite coffee shop where the till was made out of Lego, all the signage was done by hand and the music playing was always by cool new bands you’d never heard. Then, after a short while away, you returned and found it had been turned into a Starbucks. A very nice Starbucks with clever architecture and ample seating, but a Starbucks just the same. Everything worked well, the range was probably more expansive than before, but one of the main reasons you went had been taken away.

Now, before you all mark me as a Grandpa Simpson type that likes to shout at clouds, I’m not trying to say that Apple is bad. Of course not. I love my battered MacBook Air and I’ll still keep using iPads and iPhones for years to come.

So I don’t begrudge the company its success. But the problem is it’s become so good at certain things that the competition can’t really push it any more.

Take the iPad. I love iPads, they’re wonderful devices. But with no real rivals in the tablet stakes, the necessity to push forward isn’t there. The design has barely changed since my first-generation model and with most people keeping them in cases all the time it means you can basically only choose between black or white liveries. Sure, there are the iPad Pros which are hugely powerful devices, but they’re hugely expensive too and rebels tend not to be wealthy.

And that’s the rub. The Apple I fell in love with had a sense of risk about it. It dared to be different. To Think Different.

Those bonkers-looking G3 iMacs were a shock to the system when they arrived, as was the angle-poise masterpiece of the G4 iMac. The G4 Cube looked like something that should be in a design museum, which was probably all it was good for due to the overheating issues. OS X used a beach ball to signify when the system was busy, but I just couldn’t see it having that playful edge if macOS was built from scratch today.

There’s always been plenty of quality on offer from the modern products, but as the years go by there’s more a sense of safety than artistry. In fact, when Apple tried to show the world it still knew how to make a design that would turn the industry on its head, Phil Schiller unveiled the Mac Pro with the huffy remark “Can’t innovate any more, my ass!” But that machine is now universally referred to as the trash-can Mac and led to Apple apologising to users due to the fact that the device wasn’t fit for purpose. Plus, it looked a bit crap.

Perhaps that’s a good thing, though. If Apple has more catastrophic failures then maybe it will need to take some chances again. It’s very hard to risk it all when you’re one of the surest bets there is. I’m not convinced we’ll have any rainbow-coloured Macs or iPhones in the near future, but I’d welcome them with open arms, and the iPhone 11 is a step in the right direction.

As one of Apple’s most stirring ads once said, “Here’s to the crazy ones. The misfits. The rebels. The troublemakers. The round pegs in square holes.” Hopefully, in the ranks at Apple Park are a few dreamers who will be willing to stick their necks out and recapture the wild heart that first drew me and many others to the company and its products.

It’s become the biggest tech company in the world, arguably the best, but I pray there’s still room for a little craziness.