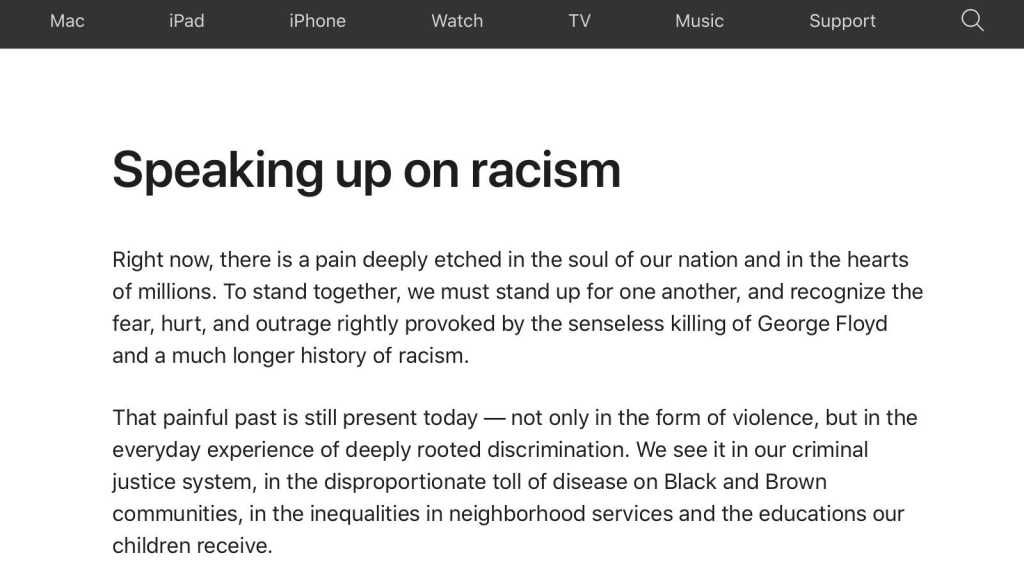 Apple CEO Tim Cook has published a statement discussing his views on racism in the wake of the killing of George Floyd by police officers and the Black Lives Matter demonstrations and protests that have followed around the world. The letter is linked to prominently from Apple’s homepage.

Cook’s post is titled ‘Speaking up on racism‘ and its focus is the “much longer history of racism” and “the everyday experience of deeply rooted discrimination” endured by many.

Cook goes on to talk about how Apple will attempt to address these inequalities. He says that “we must do more” before discussing the following commitments:

Apple’s CEO adds that Apple will be donating to organizations including the Equal Justice Initiative, which challenge racial injustice and mass incarceration.

Apple Music participated in Black Out Tuesday on 2 June, although Cook didn’t mention this in the letter.

Cook closes on a quote from Martin Luther King: “Today, our very survival depends on our ability to stay awake, to adjust to new ideas, to remain vigilant and to face the challenge of change.”

In response, Cook states: “With every breath we take, we must commit to being that change, and to creating a better, more just world for everyone.”

Apple isn’t the only brand to have released a statement relating to the Black Lives Matter cause. In comparison to some brands responses Apple’s might seem modest as it doesn’t call out for any legislative or policy changes and it doesn’t commit to Apple doing anything beyond making a donating to the Equal Justice Initiative. However, Cook (who has previously spoken out about being gay and how that has given him an understanding of how it is to be in a minority group) was probably speaking from the heart when he wrote what he did and no doubt feels passionately about the cause.

As Cook said in an interview with Bloomberg in 2014: “Being gay has given me a deeper understanding of what it means to be in the minority and provided a window into the challenges that people in other minority groups deal with every day. It’s made me more empathetic, which has led to a richer life. It’s been tough and uncomfortable at times, but it has given me the confidence to be myself, to follow my own path, and to rise above adversity and bigotry. It’s also given me the skin of a rhinoceros, which comes in handy when you’re the CEO of Apple.”

You can read Cook’s Speaking up on racism letter here.