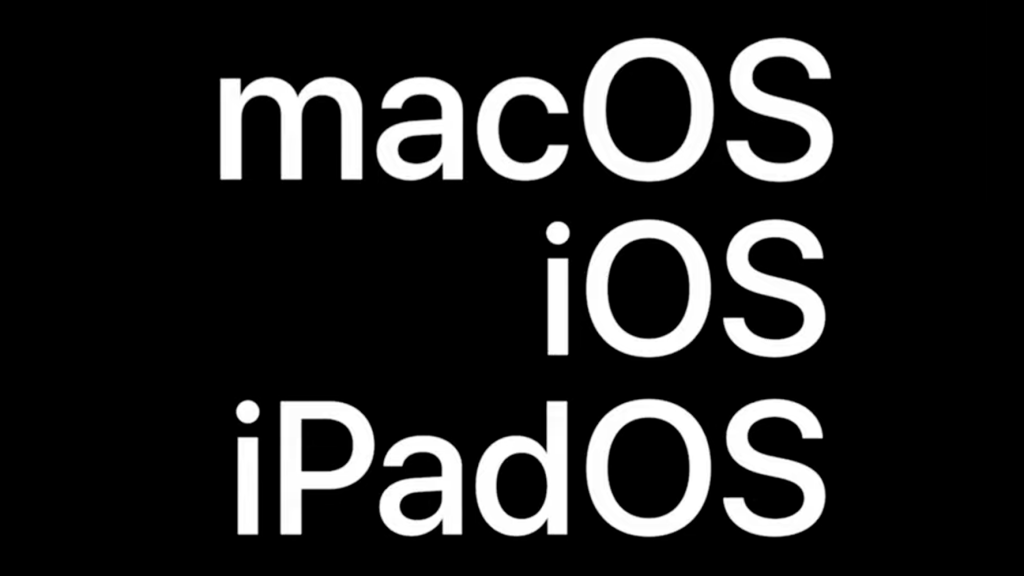 Apple has announced what we can expect when it updates its three major operating systems later this year – macOS Big Sur, iPadOS 14 and iOS 14. While these software platforms serve Macs, iPads and iPhones respectively, it seems that they are moving ever closer together in terms of features and design. This could be even more evident now that Apple has revealed that it will be switching Macs over to its own processors, beginning this year, which will make it easier for developers to adapt apps across all three types of device.

So, how different are macOS, iPadOS and iOS? We take a look at what makes them unique, as well as the things they have in common.

What is the same in macOS, iPadOS and iOS?

They may work on different hardware, but there’s more in common between the various operating systems than you might think.

macOS Big Sur has a few new features that make its look and feel more similar to the iOS experience than previous iterations, but probably the most striking change will be the revamped macOS icons. Like on the iPhone and iPad, Mac icons will now have a uniform shape and size for all apps, as opposed to the mismatch of square, circle and random designs that are currently used.

Looking at the icons in the Big Sur Dock (pictured above), they are much more similar in appearance to those on iOS and iPadOS. Indeed the Dock itself looks more like the Dock in iPadOS than ever – from the spacing to the square icon with round corners it’s all very familiar.

We’re used to swiping on our mobile screens to open the Control Centre on iOS and iPadOS. This gives us quick access to settings for Bluetooth, Wi-Fi, brightness, volume and other elements. Now Macs will offer the same convenience, with Big Sur introducing Control Centre for Mac. 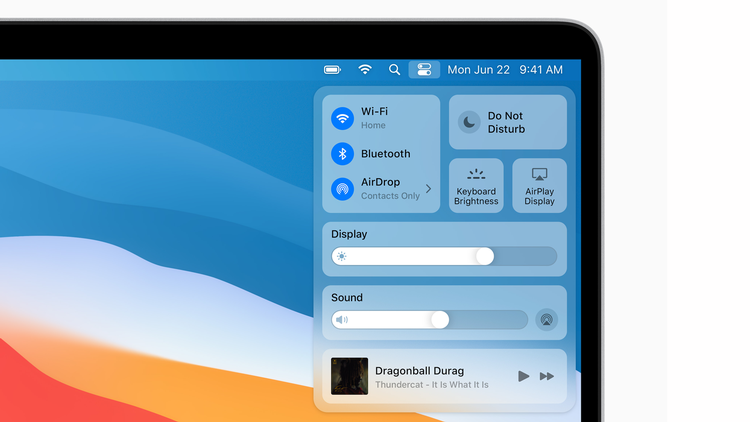 Clicking on the new icon in the upper right part of the Menu-bar drops-down the sheet which includes many of the options you’ll be accustomed to on iPad and iPhone.

Another change in Big Sur is the redesign of the Notification centre. When the update arrives it will mean that Mac users will see grouped notifications for each app, interactive elements so you can get more details without launching an app, plus the introduction of the new Widgets that offer useful at-a-glance information. 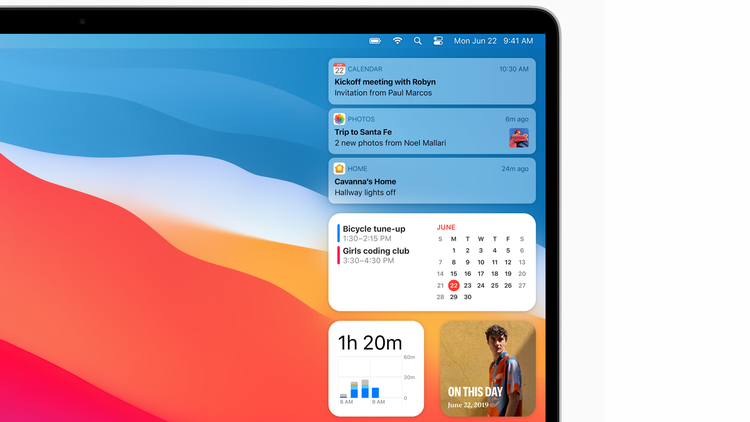 These Widgets are also one of the standout features in iOS 14, as for the first time you’ll be able to place them on the Home screen of iPhones. iPads also have a Widget section that can be viewed on the Home screen or hidden so you can call them when needed by using a single swipe. 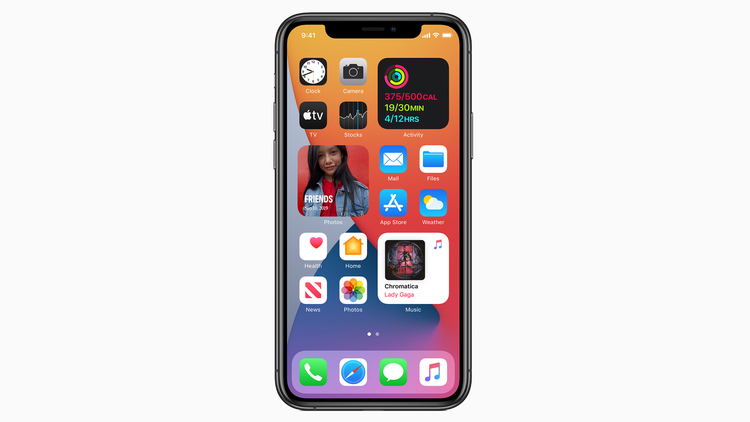 When searching for things on iOS and iPadOS, the display is usually blanked out, which makes it impossible to reference anything you had on the screen. This is now being changed in iPadOS 14 to match the Spotlight style search bar that is employed in macOS. The searches are universal too, so they’ll find any files on your device that matches the terms you enter. 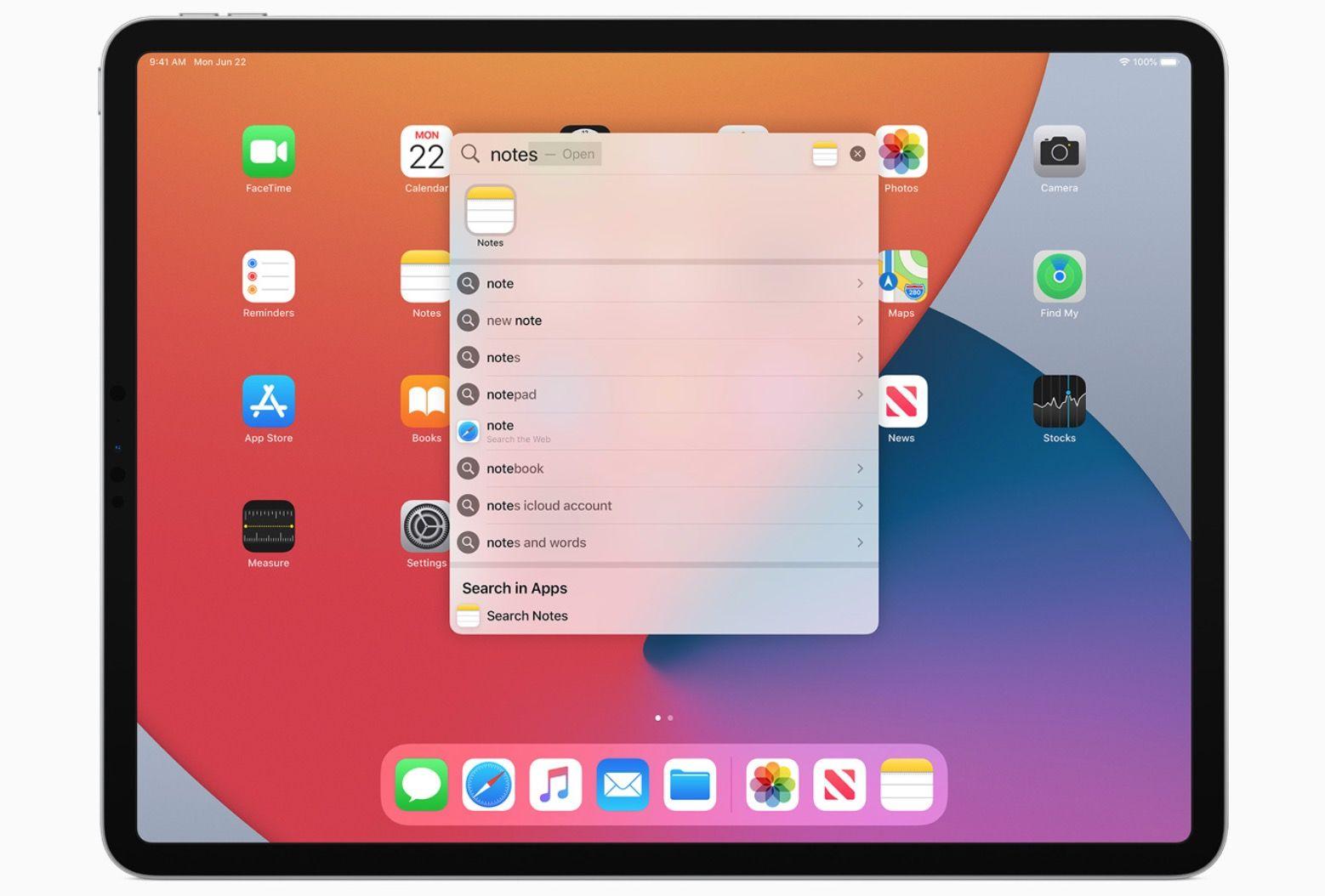 Up until now, if you wanted to create a Memoji to use in Messages, it required either an iPhone or iPad. Now, with Big Sur, you’ll be able to craft your own personal avatar on your Mac as well. You’ll still require an iPhone X or later, iPad Pro 11in or later, or iPad Pro 12.9in (3rd gen) to create Animojis. 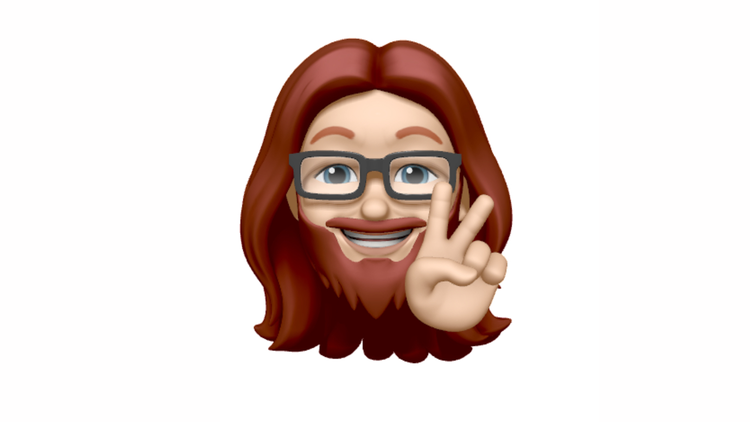 When Siri first arrived back in 2011 it was just for the iPhone, but as of 2012 it has been available for iPad, and since 2016 the Mac. From answering questions to launching apps, Siri is something that’s baked deep into the pie of macOS, iPadOS and iOS.

One of the new features of Siri on iOS and iPad OS is the fact that it will no longer take over your screen – something that it has never done on the Mac.

For a laugh why not have a look at our round up of Funny things to ask Siri.

Apple does a great job of making its apps available across the whole of its product range. These mean you don’t need to find alternatives if you’re on a mobile device or desktop. Messages, Maps, Mail, Calendar, Safari, Reminders and others work seamlessly together via iCloud, and are beginning to even look similar thanks to tweaks not only to Big Sur but also iPadOS and iOS. Soon, you may forget which device you’re using, as the experience will be the same on them all.

In fact one of the biggest benefits of being inside the Apple ecosystem is that the data you have associated with a particular app can be available to whichever device you are using thanks to iCloud. For example, if you turn on iCloud Photo Library all your Photos are available across all your devices, or if you use Pages to do word processing all your documents will be available on all your devices.

Over the years these apps have become more and more alike. In fact, since Apple introduced Mac Catalyst back in macOS Catalina it’s made it really easy for developers to port their iPad apps to the Mac. And Apple has itself used Catalyst to bring iOS versions of apps to the Mac – such as the TV app and, in Big Sur, the iOS version of Messages.

Speaking of which, if you though the main difference between an iPhone and a Mac was the fact that you can make calls and send text messages on a phone think again. For some time it has been possible to send and receive text messages on your Mac using the Messages app.

FaceTime is also available on the Mac, which means you can utilise the bigger screen for your video calls. But what you may not realise is that you can actually make voice calls from your Mac too!

One of the advantages macOS has always had over its younger siblings, is the amount of control the user has over which apps are the default. Want Firefox to open when you click a weblink? It’s easy to make it happen. Try the same thing on iOS or iPadOS and you’ll quickly find that Safari is locked as the system’s go-to browser.

This is changing in iOS 14 and iPadOS 14, albeit in a small way. When these updates arrive, you’ll be able to choose which apps are the defaults for email and web browsing. It’s not exactly the breakthrough many have been calling on Apple to make for years, but it’s a start.

What is the difference between macOS, iPadOS and iOS?

Having established what they have in common, in what ways are the different Apple operating systems different?

The iPad range may now have support for trackpads and mice, making it closer to a Mac in many ways, but one area where there is no movement yet is on touchscreens for Mac. Apple seems resolute in the viewpoint that its laptop and desktop line-up don’t need the ability for users to tap on the displays when they want to select anything. This of course has an effect on how the software is optimised in terms of the interface.

Using an iPhone or iPad, your natural inclination is to interact with on-screen elements by manipulating them with your fingers. On a Mac, not so much. Apple has been progressive in the implementation of multi-touch gestures on trackpads, negating many of the needs to reach out and tap the screen, but it remains a markedly different experience even if you’re connecting a Bluetooth keyboard and mouse to your iPad.

We can’t help think that the generation of children who are growing up with touch screens will expect the same functionality from the other devices around them.

iOS and iPadOS have come a long way in terms of their design, but when working with files they are still heavily compromised when compared to macOS. If you want to move files from one app to another to use them in projects, it can be Jekyll and Hyde on the mobile devices. Sometimes it works fine, but in other situations the combinations of file types and apps can prove frustrating.

Mouse and trackpad support on iPadOS improves things, but the macOS reliability and flexibility has it out in front by quite a way.

It’s true that there are some very impressive apps on iOS and iPadOS, with the latter’s larger display space making it easier to offer deeper levels of complexity. It’s going to be sometime though before you find the likes of Final Cut Pro X or Logic Pro X fully functional on even an iPad Pro. Some of this is due to hardware, as these apps demand higher levels of RAM than currently available on mobile devices, but there’s also a software element in terms of connecting and controlling MIDI keyboards, pre-amps and other accessories. 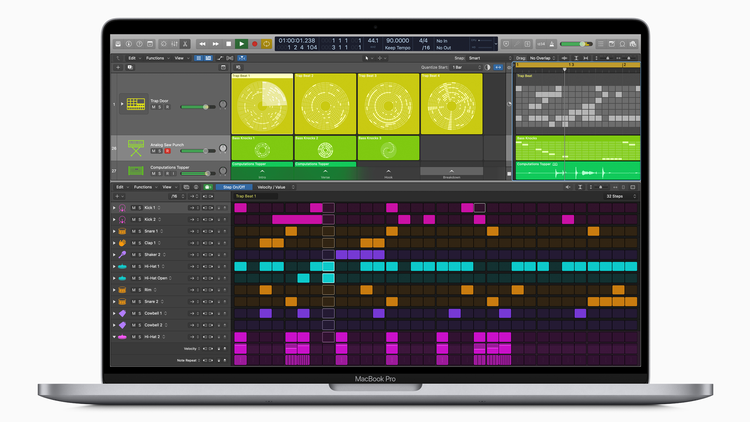 This hasn’t stopped Apple leak-guru Jon Prosser stating in April 2020 that “I am now 100% confident that FCPX, Logic Pro & Xcode are coming to iPad Pro…”. So, watch this space.

The switch to Apple’s own processors across the entire product range does open the possibility of closer integration between desktop class and mobile products in terms of software. Apple recently demonstrated its ARM-chip powered Mac Pro running iOS games natively, plus the Mac Catalyst technology mentioned earlier allows developers to quickly adapt iOS and iPadOS apps to macOS, although with redesigned interfaces and layouts to suit the keyboard/trackpad focus of the latter.

Whether we’ll ever see a total convergence is hard to answer. At the moment it still seems a long way off, but it’s fair to say that Apple’s products have never been more aligned.

If you wonder which device is right for you, take a look at our iPad vs MacBook article that compares the two larger platforms head-to-head. For the meantime though, we’d say you’re best off with all three!