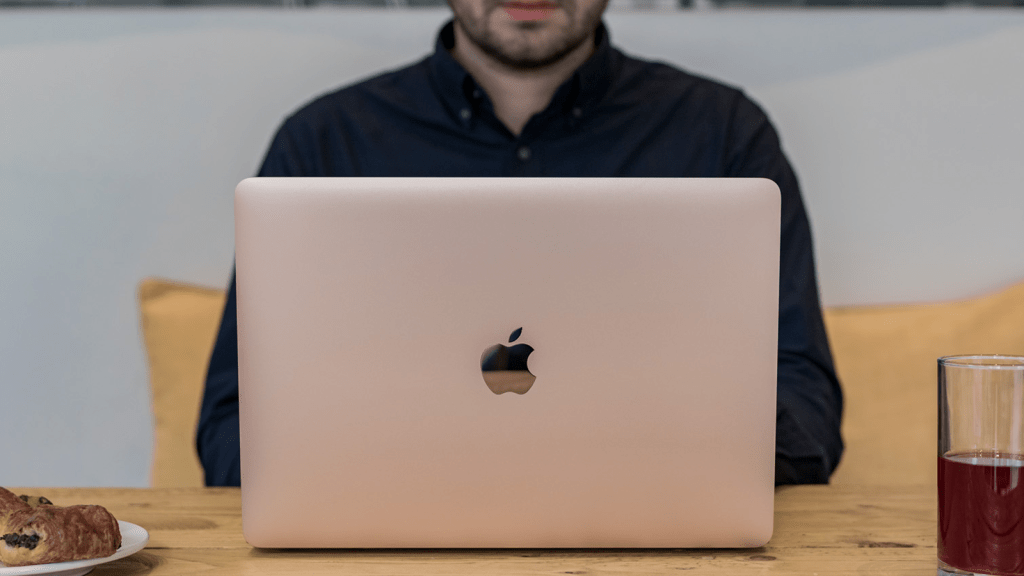 For the company that has led the world in touch-based interfaces – thanks to the iPhone, iPad and Apple Watch – it remains something of a mystery why none of Apple’s Macs have adopted this useful feature.

Well, maybe mystery is too strong a term, as Tim Cook and others have justified the approach over the years by claiming that the addition of touch to the Mac would be akin to a fridge-toaster combination. But does that thinking really still hold water? In this article we look at why Apple needs a touchscreen Mac.

Why doesn’t Apple have touchscreen Macs?

When Microsoft released Windows 8 in 2012, its primary focus on the touch-interface was something of a disaster. Many users complained of the phone-like experience on their massive desktop screens, and Tim Cook explained the perils of technology convergence by giving the aforementioned kitchen utility example.

Since then there has been a general chorus of agreement from the Apple hierarchy, with Craig Federighi (senior vice president of Software Engineering and Best Hair in Tech winner 5 years in a row) telling Wired: “We really feel that the ergonomics of using a Mac are that your hands are rested on a surface, and that lifting your arm up to poke a screen is a pretty fatiguing thing to do…” Phil Schiller (senior vice president Worldwide Marketing) added: “We think of the whole platform… If we were to do Multi-Touch on the screen of the notebook, that wouldn’t be enough  –  then the desktop wouldn’t work that way.” While Jony Ive (former Chief Design Officer), in typically minimalist style, commented to Cnet that the feature “wasn’t particularly useful”.

This disdain for touch goes back even to Steve Jobs himself, who stated in a press conference in 2010 that “We’ve done tons of user testing on this… and it turns out it doesn’t work. Touch surfaces don’t want to be vertical. It gives great demo, but after a short period of time you start to fatigue, and after an extended period of time, your arm wants to fall off.”

Why Apple should add touchscreen to Macs and MacBooks

While this may all have been true at the time, subsequent developments call this wisdom into question today.

First of all, Windows got a lot better. Microsoft learned quickly from the car crash of Windows 8, implementing design changes in version 8.1 and finally getting it right with Windows 10 and beautiful devices like the Surface Pro 7, which restored a primarily mouse and keyboard approach, but with the inclusion of touch when you need it.

And that’s the important factor. Touch can be an excellent augmentation to an interface, rather than replacing the existing one. No-one really wants iPadOS on a Mac, but the simple addition to being able to navigate websites by tapping on links and stories rather than using a cursor has obvious benefits. 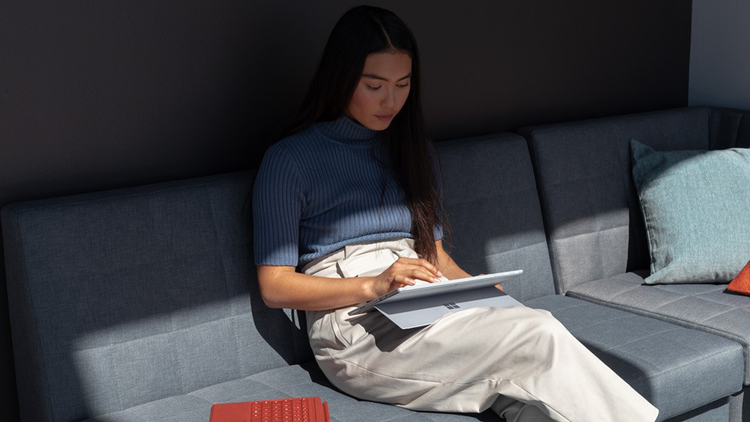 As our own Leif Johnson puts it so well in his Apple really doesn’t want us thinking about touchscreen MacBooks article, “Apple seems to assume users would want to use nothing but touch support on their MacBooks, but when I see colleagues and visitors using touchscreen Windows laptops in meetings, they’re not using them for complicated tasks like clone-stamping textures in Photoshop. They’re usually not diving deep into menus, and they’re certainly not trying to recreate one of Monet’s haystacks. Instead, they’re usually standing over their laptops and quickly swiping to different parts of a page or opening files or links, thereby saving a few seconds over what using a mouse or the trackpad would have taken. It’s sure as heck a lot more convenient than the Touch Bar, which has been Apple’s only concession to touch-based interaction on MacBooks to date.”

As Johnson points out, there are elements of touch that have tentatively been added to the macOS experience over the years. The Touch Bar is a clever band of software icons that sit along the top of some MacBook keyboards, but it’s not without its own problems. Touch-typists have to slow down to use the feature, as contextually changing icons don’t allow for the building of muscle memory in the fingers, plus there’s also the factor that you can’t see the Touch Bar unless you look down from your screen. It’s true that you don’t have to change your arm position, and scrubbing through video content is genuinely helpful, but it still interrupts a user’s flow and can end up being completely ignored in favour of the traditional on-screen controls. Then there’s the fact that it isn’t universally applied across the Mac range, making a disjointed approach to the macOS interface if you move between devices. 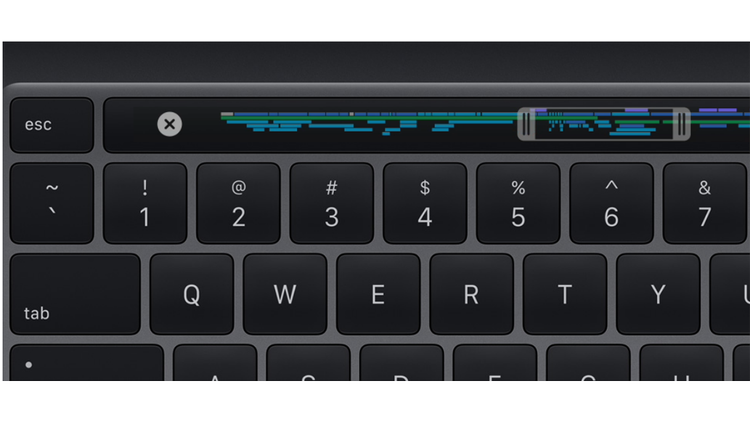 With the arrival of iPadOS and macOS Catalina, Apple introduced the Sidecar and Universal Control features that allows the iPad to become a second screen for your Mac, while also bringing some touch-controls to the party. Along with being able to interface with the screen of your Mac mirrored on your iPad using your finger, you can also access Touch Bar controls on the iPad, plus some additional commands. Add an Apple Pencil and you can turn the iPad into a graphics pad for your Mac, with even more tactile control over macOS apps. 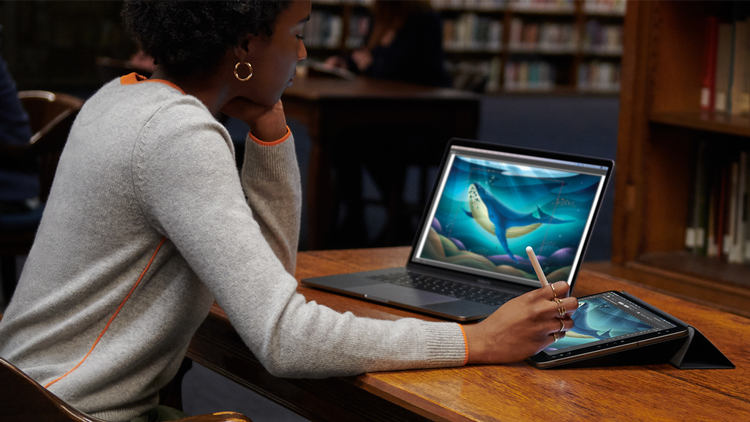 Logic Pro X also utilises the iPad and iPhone touch interface through the Logic Remote app that turns the mobile devices into control panels that can play and program various music creation tools such as Live Loops.

While it’s a clever strategy to offer extended functionality through the use of additional Apple products, neither the Touch Bar or Sidecar solve the simple issue of wanting to quickly select links on a page or navigate seamlessly through a website like you can on most Windows 10 laptops and even the majority of Chromebooks. It’s like using a diamond-encrusted sledgehammer to tap in a nail.

This is all the more curious when you consider that the iPad now supports a mouse and keyboard, and Apple has even started positioning the Pro line as a replacement for your Mac with the mantra “Your next computer is not a computer.” 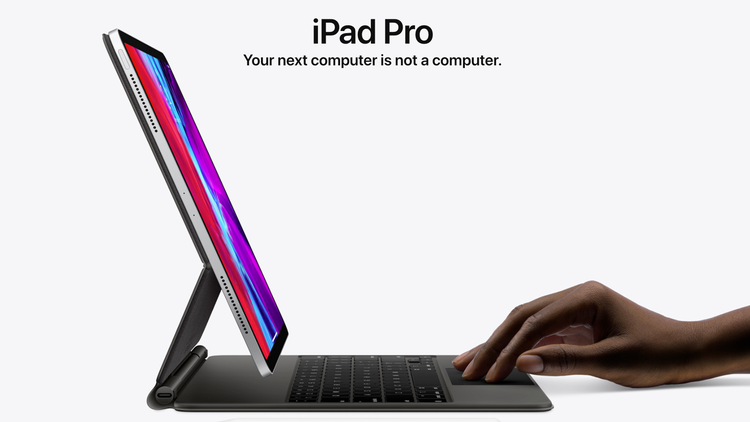 Certainly, for some people this is an attractive proposition, but with the laptop level of performance found in iPad Pros whose prices rival those of entry level Macs, and yet lack the screen sizes to compete with iMacs, it’s a niche option rather than the more obvious one.

Putting a touchscreen in a Mac and offering the ability to use it when you need it, seems a far better option that trying to squeeze a Mac-like experience into the, by comparison, heavily compromised iPadOS. For a company that prides itself on elegant solutions to problems, not having a touchscreen option on the Mac now seems more of an ideological sticking point rather than one that best serves its users.

When will Apple launch a touchscreen Mac?

Apple has pulled a few surprises over the years, with Steve Jobs famously stating in 2007 that “nobody wants a stylus”, only to have the Apple Pencil appear eight years later. Now, to be fair, Jobs was referring to a stylus on a phone, but the principle shows that when the technology reaches the required quality, the company is willing to use it in a product.

Could it be that touch is at the stage where including it in a Mac is less of a fridge/toaster situation and more of “hey, that’s really useful!” one instead?

At WWDC 2020, Apple talked about Mac Catalyst, software that allows developers to easily port iOS and iPadOS apps to the Mac. While it did point out how Mac Catalyst provided tools for optimising the converted apps to the Mac interface, this move does beg the question of how much easier again it would be for developers if a touchscreen were present on the Mac itself? Not to mention, how users wouldn’t have to learn new ways to control their favourite apps.

Going forward, new Macs now feature Apple’s own processors, just as has been the case for years with iPhones and iPads. Could this be another point of convergence that means we’ll see the Mac start to lean on the influence of its touch-focused brethren? The combination of the new M1 chips and design and feature changes in Big Sur appear to offer a strong hint about touchscreens coming to Mac, although Apple currently denies this.

iPads and Macs have never been closer together in terms of power and app compatibility, so the real decision for Apple is whether it backs the tablet or its larger counterpart in the years ahead. Of course, as greedy consumers, we simply ask “why not both?”. Until then, we’ll all have to peruse Apple’s shelves working out which is the best Mac or best iPad for our needs. Maybe soon this won’t be the case. We hope so.