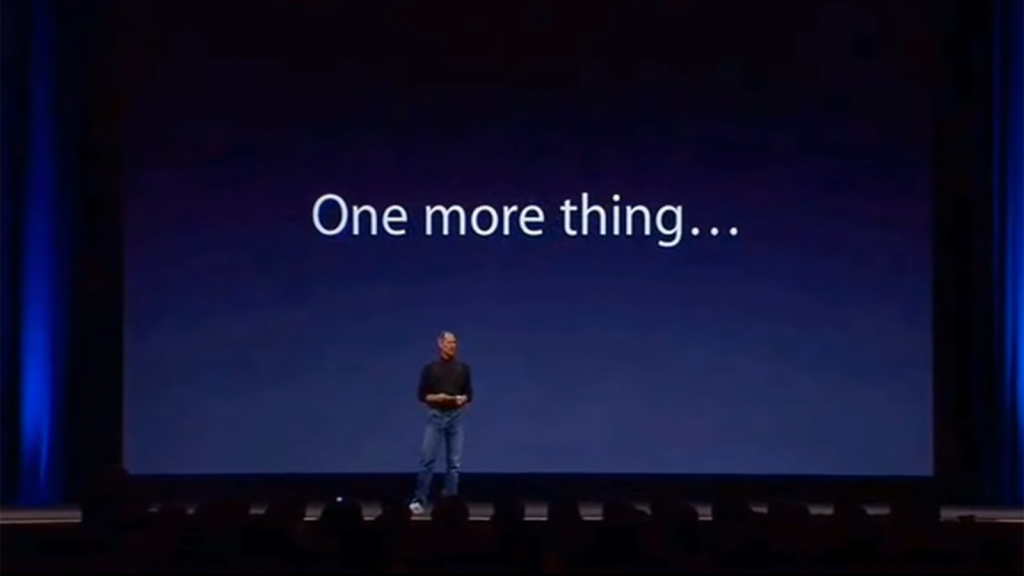 Steve Jobs will go down in history as one of the most influential CEOs of modern business. Aside from his feat of taking Apple from the verge of bankruptcy to one of the most profitable entities in the world and popularising dressing down for big events in the process, he was also a master of the keynote address.

A born salesman, Jobs took the stale format of announcing products and turned it into a showcase for iPhones, iPads, Macs and everything else that would improve the viewer’s life through their implied magic. And the pinnacle of this theatre was his ‘one more thing’ routine, where the address seemed to have ended, only for Jobs to return and unveil another product.

Since his passing, Apple has brought the technique out of retirement very rarely; the first of these was when Tim Cook revealed the Apple Watch in 2014. But while it may be (mostly) gone, to Apple fans it’s certainly not forgotten.

Here, then, is a complete guide to all of the products and innovations that Steve Jobs added on at the end.

The first product to receive the Jobs treatment was the Apple AirPort back in 1999. This was during a keynote (these were often referred to as Stevenotes) at the Macworld Expo in San Francisco.

AirPort was followed shortly afterwards by the 22in Apple Cinema display, which Steve literally pulled the covers off and wheeled to the centre of the stage at the Macworld Expo in New York.

To finish the year Jobs also introduced the iMac DV (Digital Video), the first Mac with FireWire ports, and the new iMovie software. Both signalled Apple’s intent to bring video editing to the masses.

Returning to the Macworld Expo in San Francisco, Jobs this time used his trick to reveal a new graphical user interface design for macOS called Aqua. He said the name was because the graphics needed to be “liquid” and that one of the design goals was “that when you saw it you wanted to lick it!”

Macworld Expo New York later that year brought the Power Mac G4 Cube, where Jobs demonstrated that the Apple engineers had shrunk the power of the standard Power Mac G4 down to a quarter of its size, all without the need for a fan so it could run silent.

Only one product received the ‘One more thing’ treatment in 2001, but it was a good one, as Jobs debuted the PowerBook G4 with its Titanium case and impressive components. Jobs said that it was a combination of ‘Power + Sex’, meaning that design had caught up with processing ability.

Apple’s design team were on fire during this period and for many people the iMac G4 that Jobs revealed at the New York Macworld Expo remains the most beautiful computer the company ever created.

Inspired by angle-poise lamps, it featured a 17in landscape display suspended on the end of an adjustable arm, and a domed base housing all the components. A real stunner.

Another key announcement in 2002 was when Steve turned back to the audience and shared the news that iPods would now be able to work with Windows PCs.

At WWDC 2003 Jobs was in jovial mood. After the tech specs of the new Power Mac G5 accidentally appeared on Apple’s website the week before, he joked that the company had suffered from ‘Premature specifications’.

The Power Mac G5 was no laughing matter, though, featuring a G5 chip and dubbed by Apple “the world’s fastest personal computer”.

The same year also saw the introduction of the 12in PowerBook G4, giving users the formidable abilities of a PowerBook in a far more portable frame.

The ‘One more thing’ for 2004 was a slight embellishment that followed Jobs’ reveal of the new iPod mini, as at the end of the announcement he used the phrase to show that the devices came in a range of colours.

Using the title ‘A huge day in the history of big’ Steve Jobs unveiled “the largest high-resolution computer display ever” when Apple introduced the then-enormous 30in Apple Cinema Display.

The next ‘One more thing’ was at the other end of the scale, with the iPod shuffle being a tiny version of the all-conquering music player built specifically around the shuffle mode.

Another significant moment for Apple was when Jobs announced that the iTunes store would now be selling TV shows to watch on its devices.

Apple retired the PowerBook line of laptops in 2006, replacing them with the MacBook Pro line which still continues to this day.

With the iTunes store now offering music, movies and TV shows, Apple needed a way for customers to enjoy this content on their televisions. So it announced the upcoming arrival of iTV, which in turn would be renamed Apple TV in time for launch.

With Apple wanting to increase the market share of its browser, the decision was made to create a version for Windows. It was a nice idea but proved a rare misstep for the company during this period.

In response to demand from customers, Apple introduced a new version of the MacBook that featured a full-metal enclosure, faster graphics and LED backlit displays.

iPod nano (with camera and speaker)

With dedicated digital video cameras like the Flip gaining popularity, Apple made a bid for the market by building one straight into the new iPod nano, replete with a speaker so you could enjoy the footage you shot right there on the device.

In his usual theatrical manner, Jobs revealed the new FaceTime app for iPhone 4 by sitting in a chair and calling Jony Ive, whose face appeared on the large auditorium screen for all to see. Thus, Apple’s video calling technology was introduced to the world.

Refining its streaming box, Steve pulled back the covers on a much smaller version of the Apple TV, utilising the ‘hockey puck’ design that is almost exactly the same a decade later.

While Steve Jobs pulling the original MacBook Air out of an envelope was probably his most iconic moment, the second generation that was the subject of his ‘One more thing’ in 2010 would prove to be the template for nearly all ultrabooks that followed.

Steve Jobs’ own very last thing was not an innovative piece of hardware, but instead a way for people to sync their iTunes library to the cloud.

Maybe this is a fitting end, though, as the man who shocked the world when he introduced the iPod and told people they could have 1,000 songs in their pocket bowed out with an innovation that meant people could now easily store their entire music collection and share it between their devices.

‘One more thing’ made its return in 2014 when Tim Cook announced the Apple Watch. It’s hard to know whether the product itself or the invoking of the phrase got more cheers and applause.

It turned out to be an excellent product, though, and now, with the expected arrival of the Apple Watch 6 looming, it looks certain to continue its dominance of this emerging technology market.

Tim used the famous phrase the following year too, as the company launched its Apple Music service.

“We have great respect for these words,” said Tim Cook at the Apple Park CA in 2017, “and we don’t use them lightly.” So it should be no surprise that they were reserved for the unveiling of the iPhone X, which Apple heralded as the device that would set the tone for the next decade, as the original iPhone had done for the previous one.

Since then, they’ve gone into retirement again, but we’re sure at some point a product will be worthy of a quick smile, a long pause, then the promise of ‘one more thing’.