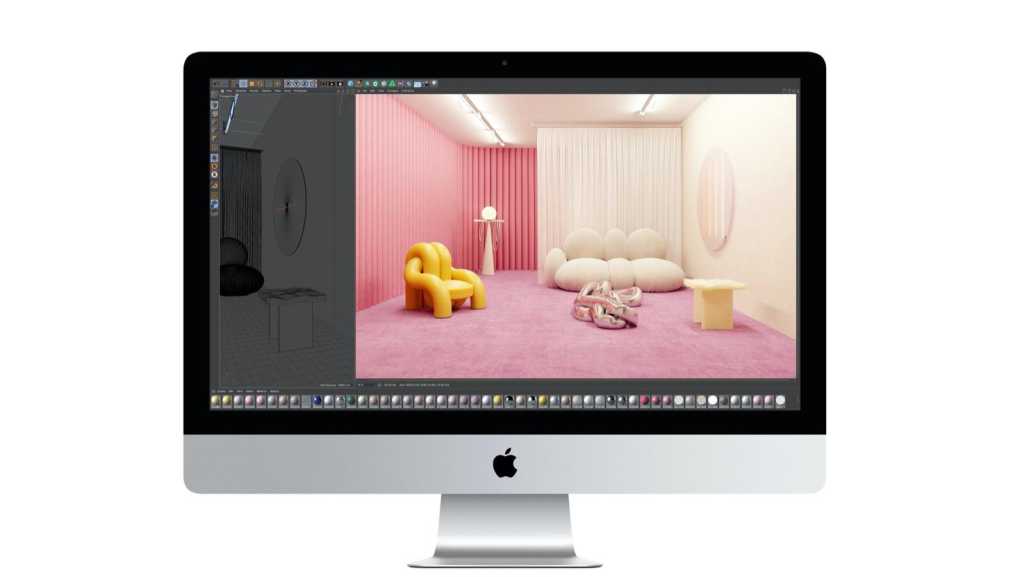 The 2020 iMac update was long overdue and those waiting for a new iMac model had been feeling neglected. Given that the traditional iMac user – at least the traditional 27in iMac user – tends to work in the creative industry, the fact that the iMacs were still using 8th generation processors and looking underpowered when compared to the MacBook Pro (and other PCs) wasn’t providing much evidence that Apple cares about the creative community as much as it claims to.

The neglect could perhaps be explained by the popularity of laptops, but creatives who rely on a decent desktop for their work were hoping Apple will update the iMac soon. Especially those who don’t want to spend £2,399/$2,399 to get a Mac with a discrete graphics card – that being the price of the 16in MacBook Pro – the only other Mac which offers that option.

Did Apple do enough with these new iMacs to appease this demanding group? In this article we’ll run through what’s new in the 2020 iMac, the new features offered by the 27in models, and what hasn’t changed… yet.

We’ll be predominantly discussing the changes to the 27in iMac here, but there are some notable differences to the 21.5in iMac that we will also refer to. (You may also want to read our review of the new 2020 27in iMac).

There are still calls for Apple to go back to the drawing board for a complete redesign of the iMac. iMac fans are hoping for a bigger screen made possible by a reduction in the bezel size and a more ergonomic design. If you are interested in finding more out about the new-look iMac – which will ship with Apple Silicon processor read this.

You can already buy the new iMac from Apple here, however, you don’t have to pay full price as other resellers have started to stock it, and some have knocked pounds off the price! You can see the best deals in our iMac deals round up.

For example, KRCS has the following new 27in iMac deals right now:

You might be thinking that nothing has changed in terms of the screen, and you’d almost be right. It’s still a 27in Retina 5K display with 5,120‑by‑2,880 resolution and support for one billion colours.

It still offers 500 nits brightness and wide colour P3. However, it does now offer True Tone, which is something that’s been a feature of every other Mac with a display, along with iPads and iPhones for some time.

True Tone adjusts the colour temperature and brightness of your screen to suit the ambient light around you. The result is less eye screen and a more natural appearance for the content you are viewing. 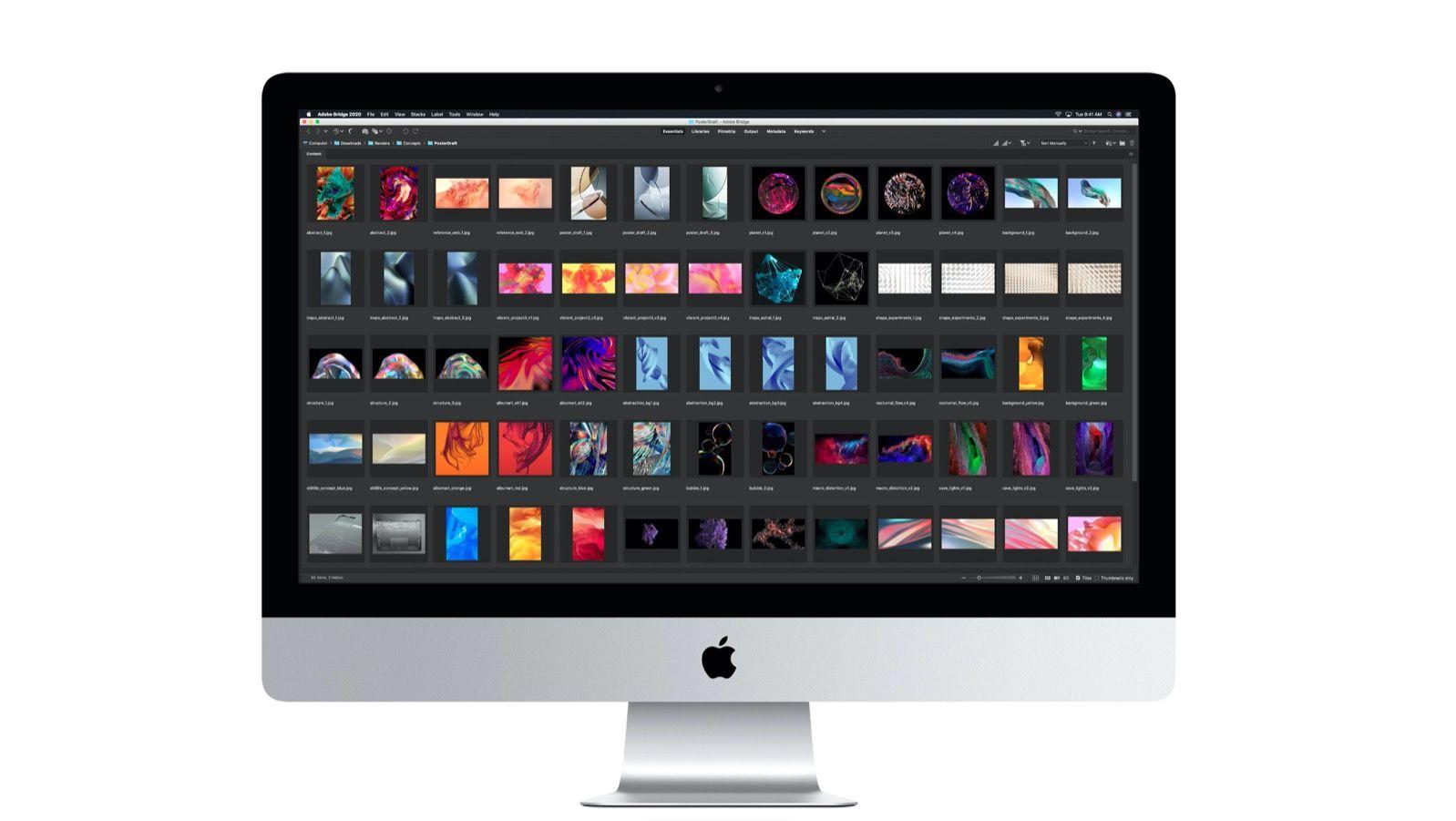 If you are the kind of Mac user who often works in a darkened room this could be a benefit. However, designers may be wary about turning on True Tone, assuming that it could mean that the colours they are working with aren’t really true. Our advice would be to make any colour adjustments with True Tone off, but use it when you want to get lots of work done without straining your eyes. This question may be why it took Apple so long to add the feature to the iMac.

There is another change to the screen but it will cost you. The iMac display is now configurable with nano-textured glass – for an additional £500/$500. This style of glass has a matte look and should produce less glare. The nano-textured glass is also an option for the Pro Display XDR (£999/$1,000 in that case).

The processor has changed. The 27in iMac now sports Intel’s 10th generation 6-core, 8-core and, as a build-to-order option, 10-core chips. The biggest changes are to the top of the range mode, which now gets a 3.8GHz 8‑core Intel Core i7, where before it was a 8-core i5 processor.

Here’s how the old and new processors compare:

The big question is when will Apple Silicon usurp the Intel processors inside the 27in iMac. There will probably be some concern among creative pros that Apple won’t be able to match Intel’s expertise at the workstation level. We’ve examined the question of what the switch from Intel to Silicon will mean [here]. It might not be as bad as you fear.

However, with the Silicon switch on the horizon is does beg another question – should you buy an Intel Mac right now?

We were surprised that Apple kept the standard 8GB RAM iMacs ship with the same as before. The mid-range 13in and 16in MacBook Pro now ship with 16GB RAM (16GB 3733MHz LPDDR4X in the 13in and 16GB of 2666MHz DDR4 memory in 16in to be exact). When it comes to RAM absolutely nothing has changed. The new iMacs still ship with 8GB (two 4GB) of 2666MHz DDR4 memory in four SO-DIMM slots. The good news is that these are still user accessible.

Why didn’t Apple make 16GB RAM standard? It’s a £200/$200 upgrade to the standard models, so perhaps Apple decided to keep prices down. Or perhaps Apple is keeping a RAM boost back for when it releases the Apple Silicon iMac next year.

Needless to say, we do recommend boosting your RAM to 16GB or more before you buy.

You might think that replacing a 1TB option with just 256GB or even 512GB would be a negative, but we think that the benefits far outweigh the disadvantages. We expect to see some real improvements in performance based on the flash storage that can be accessed faster. If you think you need more storage and don’t want to spend a fortune look at getting an external drive or iCloud storage.

We discuss why hard drives should be a thing of the past here.

Speaking of which, the only real change to the 21.5in iMac is the standardisation of the SSD. The 1TB hard drive and Fusion drive options are now gone, replaced with 256GB SSDs across the range. This is good news for the reasons we mention above. We anticipate that the move to SSDs here will also result in good speed increases for these Macs, despite there being no processor changes. 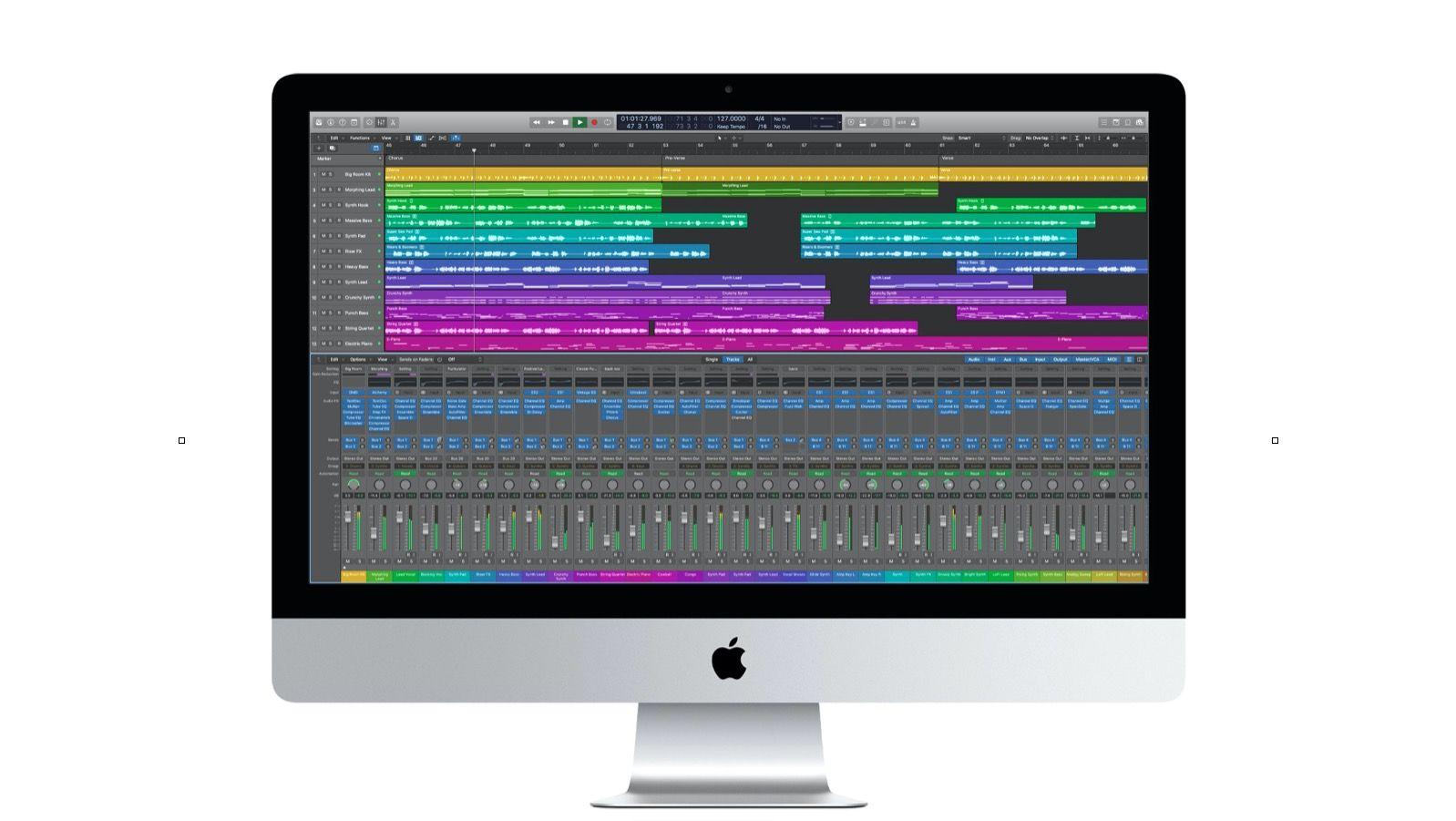 Graphics have been updated, but surprisingly two of the new models ship with the same Radeon Pro 5300 with 4GB of GDDR6 memory. The graphics used to be a point of comparison between the entry-level and mid-range 27in model, but now the extra £/$200 just gets you double the storage and a faster processor.

These new GPUs have a new RDNA architecture, support GDDR6 memory and are produced using the 7nm process.

The FaceTime camera warrants a mention because it’s something we’ve found particularly lacking from Macs during the Coronavirus pandemic. The quality of FaceTime cameras is very poor and it’s noticeable – and sometimes embarrassing – now that we are all regularly video calling.

So it’s great news that the 27in models now offer a 1080p FaceTime HD Camera at last. They previously featured a FaceTime HD camera). Hopefully this should make a difference to how we look on calls, then again, perhaps you prefer to have a grainy image. 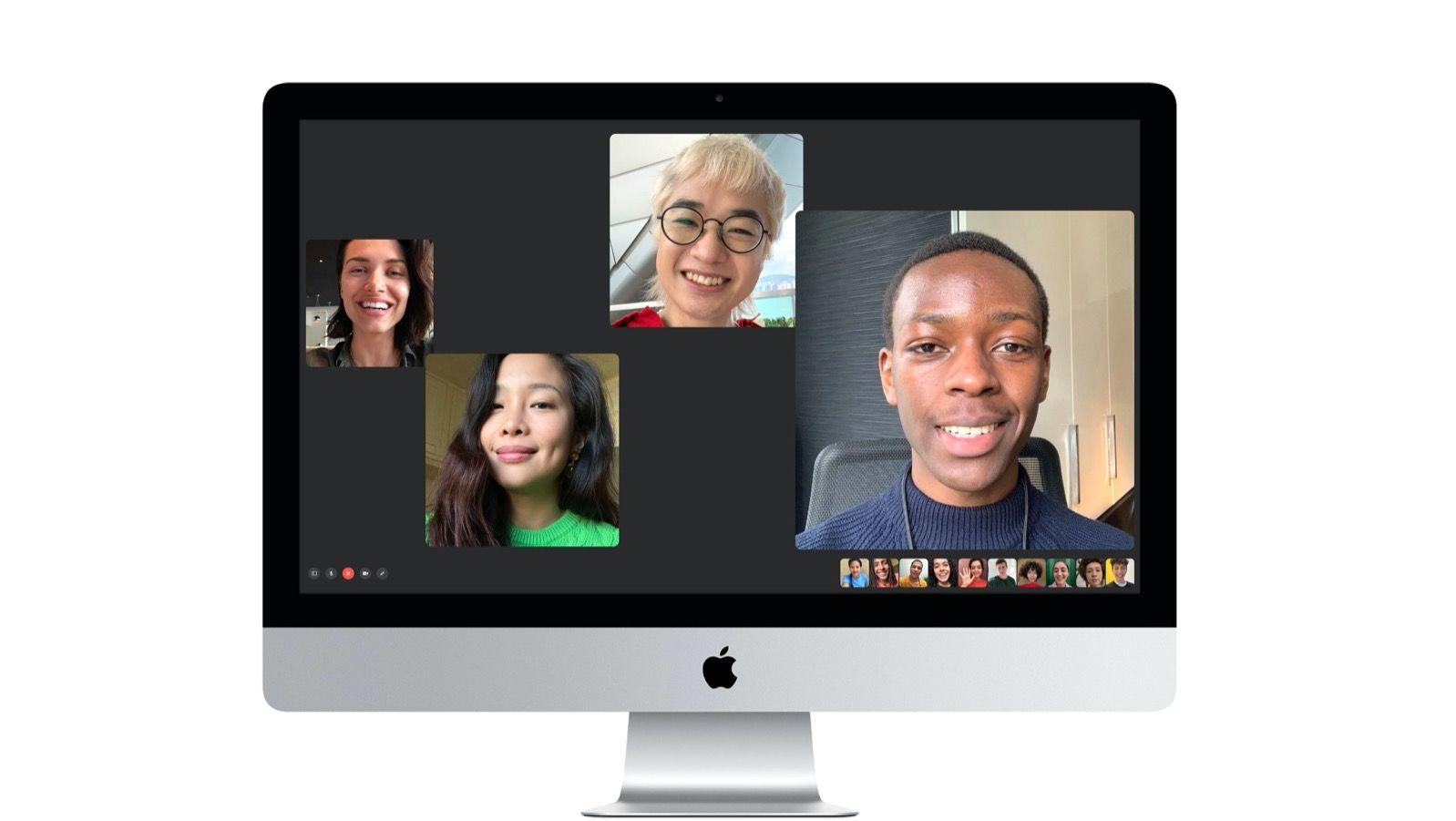 The new 27in iMacs now offer a studio-quality three-mic array with high signal-to-noise ratio and directional beamforming (Apple’s words). Until we test the new machine we won’t comment on what this means, but we assume that the audio quality will be better thanks to this.

Hey Siri is another new feature for the iMac. Supported thanks to the inclusion of the T2 chip (which means there is one Apple processor inside the iMac.)

Apple’s T2 chip is already used in the iMac Pro, Mac mini, MacBook Air, and MacBook Pro, where it powers the System Management Controller, image signal processor, audio controller, and SSD controller, as well as keeping Touch ID data secure and offering encryption and secure boot capabilities. It was a surprise not to see the T2 chip in the 2019 iMac to be honest.

The back of the iMac, where the ports are housed, doesn’t look any different, but it is. The biggest change is that the USB A ports are now USB 3, which are of course compatible with the older standard, but faster. The SDXC card slot now supports the new UHS-II standard for faster speeds (and it’s great news that it’s still there!) There are still two Thunderbold 3 ports. Ethernet is now configurable to 10Gb Ethernet with support for 1Gb, 2.5Gb, 5Gb, and 10Gb Ethernet

Physically the iMac hasn’t changed – on the outside at least. The design is just the same as it has been for the past decade. The dimensions haven’t changed either, but the new iMac is lighter – no doubt due to the removal of the hard drive. It now weighs 19.7lb/8.92kg rather than 20.8lb/9.42kg. Not that you are likely to be carrying it around much.

The only change is that Apple now includes a polishing cloth in the box. So perhaps your new iMac will remain shiny for longer.

This is a worthy update to the iMac, but it should be after so long. However, Apple will need to do much more to win over the creative pros in the run up to the switch to Apple Silcon – or it could risk losing its traditional market.

Still wondering whether to buy the last Intel iMac? We have this article that might help: Should I buy the new iMac

For more advice about which Mac to buy read: Best Mac Buying Guide.